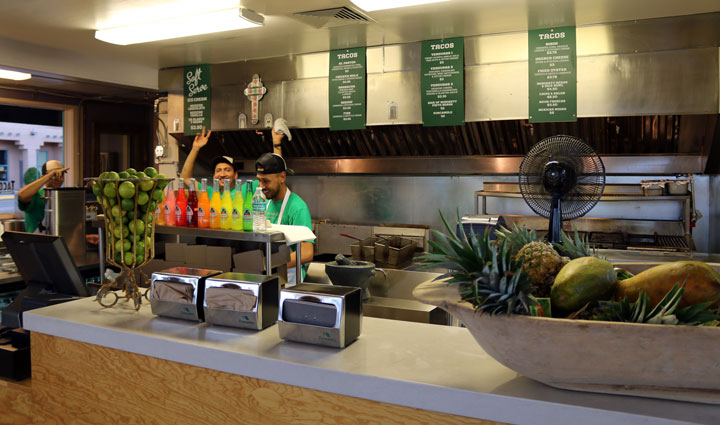 Consider it sacrilege if you will, but some pundits believe the taco is poised to become the most ubiquitous and popular dish in the fruited plain. One such heretic is eater.com’s Nick Solares who made the audacious prediction that the taco will replace the hamburger as the American national dish within fifty years. He makes a great case for his conjecture, citing such factors as the rising Hispanic immigrant population, America’s hipster culture, and people in general embracing the taco as a budget alternative to American fast foods. New York City-based chef Alex Stupak is similarly inclined. In recent years, he points out that largely because of the rising cost of beef, chicken has supplanted it as the most consumed protein in America and he believes pork is poised to make a run at beef, too.

Tacos have a way to go before catching up with burgers…a long way. According to a 2012 PBS Newshour feature, Americans eat an average of three hamburgers a week. That’s a whopping total of nearly 50-billion burgers per year. By comparison, that same year Americans consumed 4.5 billion tacos, inexplicably including 554-million Jack in the Box tacos (a taco described by one source as a “wet envelope of cat food). When it comes to availability and diversity, the City of Angels is peerless. In Los Angeles, there are 5,575 places to buy tacos which means you can eat tacos three times a day and never visit the same place for five years. You want diversity? Los Angeles is the birthplace of the Korean taco, an exemplar of which you can enjoy at Albuquerque’s Soo Bak Foods.

As much as denizens of the Duke City may believe we’re prolific consumers of tacos, one scientific analysis ranked Albuquerque 38th in a listing of “America’s most/least taco-crazed cities.” From among the 50 largest cities across the fruited plain, five Texas cities–Arlington, Fort Worth, Austin, Dallas and San Antonio in that order–ranked one through five and Houston ranked ninth. Even El Paso ranked above Albuquerque, finishing fifteenth. For those of us who don’t believe New Mexico should rank behind Texas in anything, that’s pretty hard to take.

Do these scientific findings mean La Tierra Encantada can’t prepare tacos encantados? Hardly! My friend Schuyler, a proud New Mexican temporarily exiled in the Dallas-Fort Worth metroplex, will tell you that New Mexicans spread their love among the multitude of outstanding foods available across our enchanted state. We’re not as taco-crazed as other states (especially Texas) in which no other foods warrant affection. He tells me two purveyors of tacos–El Cotorro and B2B Tap Room-— recently showcased on Gil’s Thrilling… are probably better than any tacos you’ll find in the Lone Star state.

Texans and New Mexicans alike will go crazy for Santa Fe’s Taco Fundacion which opened its doors in late April, 2017. Taco Fundacion sits in the revered Guadalupe Street location which for 61 years housed Bert’s Burger Bowl, a capital city institution. Scant months after the Burger Bowl’s closure (on April 29, 2015, a day which will live in infamy) restaurant impresario Brian Knox announced he would be launching a taco restaurant at that former home of hallowed hamburgers. It took almost exactly two years for his plans to reach fruition.

For nearly three decades, the name Brian Knox was synonymous in Santa Fe with fine-dining, having earned his stripes in such highly regarded restaurants as Escalera and the Coyote Cafe. He also owned and operated Aqua Santa, a contemporary American restaurant which helped pioneer the city’s slow-food movement. Wanting for several years to make high-quality burgers widely accessible and affordable in a fun and welcoming venue, he launched The Shake Foundation in 2014. Now, Knox hopes to duplicate his success with the Shake Foundation by offering “classic” tacos constructed with organic ingredients.

From all outward appearances, not much has changed at the familiar site—not even a fresh coat of stucco. That’s certainly a nostalgic boon. As with Bert’s (and the Shake Foundation), you’ll walk up to a counter, scan the overhead menu and place your order then wait to be called. Once your order is ready, you can pick up napkins and douse your tacos with bottled pepper and tomatillo sauce (not that they’re needed at all). Alas, your only seating options are shielded outdoor patios—or your motorized conveyance. Expect the Taco Fundacion to do a booming take-out business.

As of our inaugural visit in August, 2017, the Taco Fundacion was one shy of a dozen different tacos including three vegetarian (verduras) tacos and three with seafood (oyster, shrimp and fish). Other than tacos, the menu offers salsa and chips, a side of Moriarty pinto beans and guacamole. You can quench your thirst with Mexican Coke and Jaritos brand beverages. Perhaps a portend of more deliciousness to come, the marquee in front of the restaurant also reads “burritos” and “bowls,” though the fun-loving guys at the counter didn’t have any details.

For my Kim, the taco most appealing is always al pastor (roasted marinated pork, pineapple, onion and cilantro), the famous tacos in the style of the shepherd. Believed to have developed in Mexico because of the influence of Lebanese immigrants to Mexico, tacos al pastor offer a balance of savory, sweet and tangy flavors. Unlike on some Hawaiian pizzas, pineapple is much more judiciously used so that its tanginess is more hinted at than a dominant flavor. Two corn tortillas per taco provide a nice savory, intensely corn-flavored contrast to the marinated pork.

Since its launch, one of my favorite offerings at the Shake Foundation has been the fried oyster sandwich with red chile mayo so it stands to reason the Taco Fundacion’s oyster taco (chipotle mayo and cabbage) would also strike my fancy. It did. There are never enough oysters to sate this oyster-lover, but what oysters there were, were quite good. The chipotle mayo packs a barely discernible kick which means it doesn’t take anything away from the unique flavor profile of the oysters.

Bison meat is similar to beef, but those of us with discerning palates believe it has a slightly different flavor and texture. It also has more health benefits than beef: lower fat, more lean, low in cholesterol, and high in protein. At Taco Fundacion you need to know is that it makes a delicious filling for a taco. The bison taco (creamed corn, Oaxaca cheese, avocado crema) stands out as much for the bison as for the sweet corn niblets and an addictive avocado crema.

The one taco we found most boring is the chicken mole taco (crema and sesame seeds) which lacked the complexity of flavors and punch of true Mexican moles. Moreover, it was more than a bit dry. A much better version can be found at Albuquerque’s Taqueria El Paisa.

In Santa Fe, tacos have already replaced burgers–at least in one location. Whether or not the popularity of tacos supplanting that of burgers will ever transpire remains to be seen, but if they do you can credit great taquerias such as the Taco Fundacion for leading that charge.