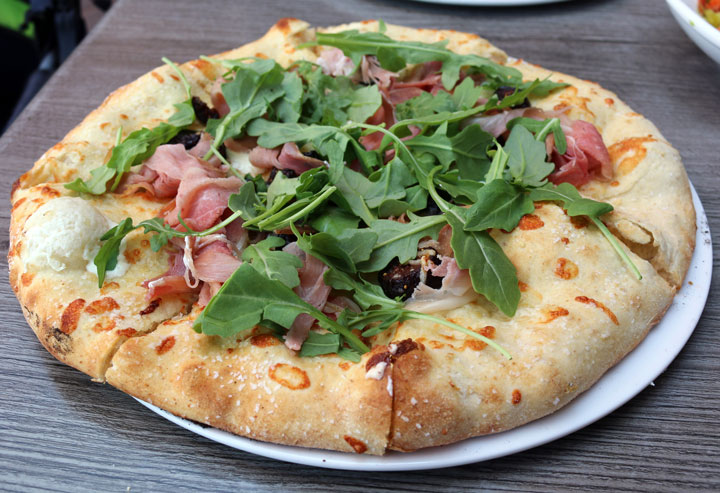 To celebrate the 100 year anniversary of pizza in America, James Beard Award-winning food writer Ed Levine ate nothing but pizza for an entire twelve month period, taking a representative pulse of the best from among thousands of pizza purveyors. His terrific tome, Pizza A Slice of Heaven, published in 2010, provides a definitive guide to a beloved staple that in its elemental form is simplicity itself–bread, cheese and whatever toppings a pizzaioli artisan might care to add. To the surprise of cognoscenti and plebeian alike, Levine declared the best pizza in the fruited plain (and the world, for that matter) to be made in the unlikely town of Phoenix, Arizona where the intensely brilliant Chris Bianco plies his trade as no other. Yes, that Phoenix, Arizona!

In the dozens of business trips I made to the Phoenix area while working for Intel, convivial colleagues introduced me to a number of wholly forgettable models of pizza mediocrity. “All-you-can-choke-down” seemed to be their primary criteria for assessing the quality of pizza. I gleaned the impression that save for Pizzeria Bianco, nary a good pizza was to be found in the 9,071 mile expanse of metropolitan Phoenix. None of my colleagues had ever even heard of the anointed purveyor of peerless pies and when I explained where Pizzeria Bianco was located, none would venture that far…especially when prodigious portions of the all-you-can-eat variety were in much closer proximity. Eventually I made it to Pizzeria Bianco on my own and confirmed what Ed Levine had proclaimed.

When we heard a Scottsdale-based restaurant chain specializing in pizza would be expanding to Albuquerque, misgivings quickly set in. If this interloper was comparable in quality to the cavalcade of barely passable pizzerias to which my colleagues introduced me, surely savvy Duke City diners would spurn it. With the sobriquet Sauce–subtitled with “Pizza and Wine”–the burgeoning franchise currently has eight locations in the Phoenix area and four in Tucson with Albuquerque being the first city outside of Arizona to which Sauce has expanded. The franchise is located at The Corner @ Winrock, an Uptown property in the sprawling Winrock complex. Sauce is situated in a 3,000 square-foot space on the corner of Indian School and Uptown and has a capacious dog-friendly patio.

The Sauce menu is so much more than pizza and wine. Twelve signature pizzas constructed from handcrafted toppings, made-from-scratch sauces and dough prepared fresh daily, might be the first thing to which your eyes gravitate, but you’ll probably peruse the salads menu rather closely, too. Prepared fresh daily, the ten composed salads aren’t all of the run-of-the-mill variety and the dressings are all house-made. Locally-sourced, fresh-baked bread from Fano Bread Company is the canvas upon which the four paninis are made. Pasta paramours have five choices, including a macaroni and cheese option which appears to be very popular. Soups, sides and desserts are also very intriguing. Guests order at a counter but an attentive server staff will deliver your order, refill drinks and bus tables.

If you’re tired of designer greens-based salads, Sauce has an Italian Chopped salad (pepperoni, sopressata, smoked mozzarella, pepperoncini, kalamata olives, yellow tomatoes, cucumbers, carrots, red onions, roasted garbanzo beans and roasted garlic vinaigrette) that will make a believer out of you. Sure, chopped salads (which include ingredients which have been chopped to be uniform then either composed or tossed) have been around for a long time, but peruse the aforementioned ingredients and you’ll probably note combinations heretofore unseen to you. These ingredients coalesce into a delicious whole in every bite. There are plenty of surprises in this salad, among them the crunch of the roasted garbanzo beans, the smokiness of the mozzarella and the potency of the roasted garlic vinaigrette, for example.

From among Sauce’s signature pizzas, several are sure to pique your interest. Among them are the Prosciutto & Fig (black mission figs, goat cheese and fresh arugula). The idea of tossing arugula atop a pizza was almost certainly conceived by celebrity chef Wolfgang Puck. It’s an idea oft duplicated, especially in California. Not among my favorite toppings, arugula nonetheless adds a bold, peppery flavor to each pie. While the black mission figs counterbalance the tanginess of the goat cheese and the saltiness of the prosciutto, a fig jam would have been preferable to sliced fig halves. Our favorite aspect of each slice was the pizza crust, especially the cornicione, an Italian term for the “lip” or puffy outer edge of the pizza. The cornicione is not only is soft and chewy, it’s got granules of sea salt that enhance its just baked bread flavor and aroma.

Noting that “nothing ruins a pizza faster than the wrong toppings,” The Cheat Sheet, an online presence dedicated to “providing audiences the information they want in an approachable, entertaining way” compiled a list of the fifteen most hated pizza toppings many people think take a pie from delicious to disgusting. Among them are spinach (described as making a pizza soggy while imparting very little flavor) and mushrooms (another topping which adds very little flavor). Both spinach and mushrooms adorn the Lasagna Pie along with ricotta, meatballs and fresh garlic. These ingredients seem more at home on a true lasagna than atop a beauteous crust. Still, the one ingredient we enjoyed least was the meatballs which lacked the personality of say, a spicy sausage.

My Kim didn’t get much argument from me that along with the Chopped Italian, the best item on the Sauce menu is the gelato from Van Rixel Brothers. That could be said about almost every restaurant in which Van Rixel gelato is offered. What’s so great about this gelato? Aside from having a lower butterfat and sugar content than ice cream, texturally it’s also much denser than ice cream with a much more intense and concentrated flavor. High-quality artisan gelato retains its texture (from delicate ice crystals) for only a few days which is why great gelato is usually made on the premises or at least locally (the Van Rixel Brothers are Albuquerque-based), not shipped from afar. Two winning flavors we enjoyed are lavender-lemon gelato and chocolate gelato. Sauce’s portion size was very generous.

Sauce Pizza & Wine has redeemed Phoenix pizza in my eyes. It’s not only better than any of the pizza parlors to which my Arizona colleagues took me, it’s a very good addition to the Duke City pizza scene. The Italian Chopped salad alone is worth a visit (or six) while the basil-lemonade is a best in town caliber beverage.