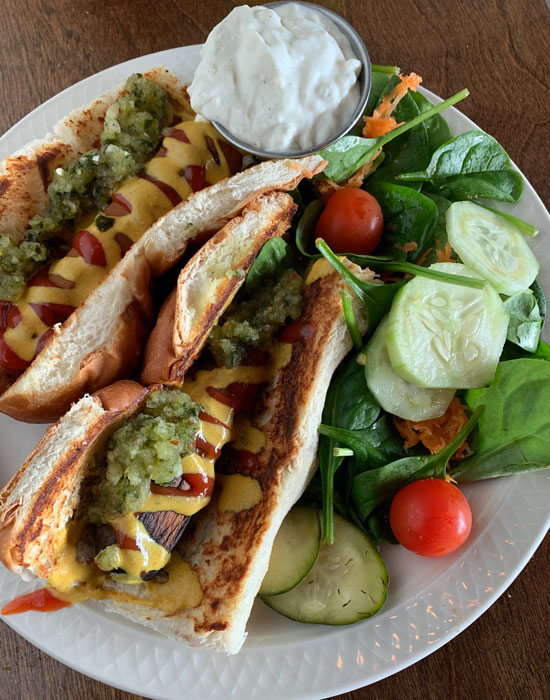 A cross-sectional study conducted in 2006 by medical researchers in Austria concluded that “vegetarians are less healthy and have a lower quality of life than meat-eaters” and that “there is an association between a vegetarian diet and an increased risk of certain chronic diseases.” The “chronic diseases” cited in the study were allergies, cancer and mental illness. While this study and its methodologies have largely been discredited, my former colleague Matt Mauler, a fanatical meat-and-potatoes paramour, likes to cite this study when someone “preaches” the virtues of vegetarianism. He especially revels in emphasizing the part about mental illness. “You’ve got to be crazy not to love cheeseburgers, steak and pork chops,” he snorts with derision.

The only vegetables Matt likes are those with which he tops his favorite comfort foods: pizza (lots of mushrooms and black olives followed by a six-pack chaser), burgers (only lettuce unless you consider bacon and cheese vegetables) and Chicago hot dogs (enough sport peppers to choke a dragon). Every other vegetable may as well be hemlock, poison ivy or poison sumac. Though he disagrees vehemently with Anthony Bourdain’s “commie” politics, Matt celebrated when the celebrity chef, author and television host called vegetarians “the enemy of everything good and decent in the human spirit, an affront to all I stand for, the pure enjoyment of food.” Similarly, Matt has always loathed Lady Gaga, but praised her fashion sense when she donned a dress made of raw beef at the 2010 MTV Video Music Awards.

Surprisingly, Matt’s attitude (and that of Anthony Bourdain) toward vegetarians isn’t uncommon…and attitudes are even more visceral toward vegans. The internet is rife with rancorous railing against the 3.2 percent of adults (an estimated 7.3 million people, including about 1 million vegans) across the fruited plain who follow a vegetarian- or vegan-based diet. It’s as if the pursuit of life, liberty and happiness guaranteed in the Declaration of Independence should exclude “those v. people.” As with all stereotypes, much of Matt’s enmity toward vegetarians and vegans is based on the perception of a threat to a belief system—in this case, his belief that “if God didn’t mean for us to eat animals, He wouldn’t have made them out of meat.”

Should Matt ever read this review, he’ll probably “have a cow” (wouldn’t that be appropriate?) to learn about The Acre, an Albuquerque vegetarian restaurant with the audacity to describe its cuisine (not the word he’d use) as “comfort food,” and worse to declare that its “fresh, hearty, traditional American cuisine” will “satisfy even the most devoted carnivore.” Being a staunch, unwavering meat-eater, he would view those assertions as “fighting words” or “blasphemy” but would never consider taking it as a challenge to sample the cuisine, if only to prove his contentions as to how bad vegetarian food is. Nope, readers of Gil’s Thrilling… will never see Matt’s shadow cross over The Acre’s doors. You’re not missing much.

You are, however, missing some of the very best vegetarian food in Albuquerque if you don’t visit The Acre, where as we discovered, those claims of “comfort food” and “satisfying devoted carnivores,” are all true. My friend and colleague Elaine and I had to do a double-take when we perused the menu which was teeming with some of Matt’s comfort food favorites: cheeseburger, grilled cheese, mac n’ cheese, enchiladas and more. Also available were vegetarian versions of a hot dog (marinated, braised carrot dogs), meat (less) loaf and several sandwiches which sound so good, you might not miss meat at all.

The Acre is the brainchild of executive chef-owner Sean Weed, a former private chef in New York and 26-year veteran of the restaurant industry. Nostalgia –memories of time spent as a youth at his grandparents’ farm in Pennsylvania where true fresh “farm to table” food was grown and served–provided the impetus for his restaurant. Situated in a 1,440 square-foot space, part of which previously housed the India Palace, The Acre is seasonal, local and in this omnivore’s estimation, so good it defies labels. It’s the antithesis of the stereotypical vegetarian restaurants which showcase tofu, sprouts and kale (and which help perpetuate beliefs of folks like Matt).

4 January 2018: It hasn’t been for lack of trying that I’ve never enjoyed a vegetarian burger. Most range from barely edible to downright awful. The Acre’s cheeseburger propels all the others into my repository of bad memories. The “beef” substitute is a beet-black bean combination which might not make you forget your favorite 80-percent lean ground chuck to 20-percent fat content ratio, but it shouldn’t. It’s very good on its own with a moistness and flavor yes, even carnivores will enjoy. The burger also includes Cheddar, avocado, lettuce, tomato and onion with mustard and ketchup on the side. It’s served with potato chips.

4 January 2018: From among the “mains” section of the menu, deciding whether to have mac n’ cheese, enchiladas or pasta will prove a challenge akin to selecting one favorite from among your three favorite Dallas Cowboys. Ultimately, the seasonality of the pasta dish won me over. Though labeled strictly “pasta” on the menu, this dish is so much more: roasted butternut squash, Gorgonzola cream, piñon and Parmesan. Frankly, the dish had me at “roasted butternut squash,” a very underrated ingredient at Duke City restaurants. Vibrant, sweet, creamy and earthy, the roasted butternut squash, cut into small cubes, melds wonderfully with the sharp and robust Gorgonzola cream and nuttiness of the Parmesan. This dish is reminiscent of so many rich, delicious pasta dishes found at Italian restaurants.

4 January 2018: The Acre’s five desserts (as well as cookies and milk and an ice cream of the day) alone might convert carnivores to a life of vegetarianism…or at least to increased open-mindedness. Elaine’s choice was the Fresh peach crumble (brown sugar, vanilla). Though fresh peaches were a bit out of season, at least they weren’t canned…and who doesn’t love a good crumble. For someone who espouses green chile as an ingredient which goes well with everything including desserts, my only logical choice was the green chile apple crisp showcasing Hatch green chile. It was a bit too incendiary for Elaine’s tastes, but perfect for this fire-eater. Besides, the snickerdoodle ice cream was there to quell any burn.

17 December 2018:There’s such a wide political and cultural schism across the fruited plain that it sometimes appears opposing ideologies just can’t and won’t agree on anything.  That is, until the Washington Post published a recipe for charred and steamed hot dogs made from carrots.  Readers across the political spectrum reacted with rancor, derision and threats of bodily harm.  Conservative talk shows and liberal comedy shows alike mocked the faux hot dog premise.   Whether this divisive issue portends the ascendancy of a national platform or candidate to unite the country remains to be seen.   Matt Mauler, of course, would side with traditionalists who prefer all the nitrates, nitrites and sodium in “regular” hot dogs.  Your humble blogger, on the other hand, would never kick a carrot dog off my table.

Sure I’ve read all the literature which claims “they actually look and taste like a hot dog, but they’re much healthier,” but until my second visit to The Acre, the concept of carrot dogs seemed rather ethereal, like a ghost. Let me tell you right off. The Acre’s comfort dogs don’t taste exactly like a hot dog, but they’re better than many I’ve had…and they’re certainly not the raw carrot shoved inside a hot dog bun you might perceive. Nor are the carrots simply boiled to a mushy consistency. Texturally they’re the consistency of a hot dog even going so far as having a little snap. The Acre’s menu indicates they’re “marinated and braised” and served with the “classic fixings” (mustard, ketchup and relish). That marinade imbues them with a smoky flavor (maybe liquid smoke) that sneaks through. The buns are lightly toasted and soft. My in-laws in Chicago would probably disown me if I ever had a “real” hot dog with ketchup, but they’d probably forgive me if they saw me enjoy a carrot dog.

17 December 2018: It’s never too early to remind readers that on the Saturday preceding some much ballyhooed professional football game, the Roadrunner Foodbank will be hosting Souper Bowl, its annual soup and dessert fund-raising event.  More than 1,200 people flock to the Food Bank facility to enjoy wonderful soups created by restaurants from throughout the metro area. Here’s hoping The Acre’s spicy coconut pumpkin soup is entered into the competition. This is a magnificent elixir, the type of soup you want to arm yourself with to combat winter’s cold. It certainly lives up to its “spicy” descriptor courtesy of curry, cayenne, ginger and other spices. Moreover, it’s a delicious soup, one of the best this nine-time Souper Bowl judge has had in 2018.

One thought on “The Acre – Albuquerque, New Mexico”