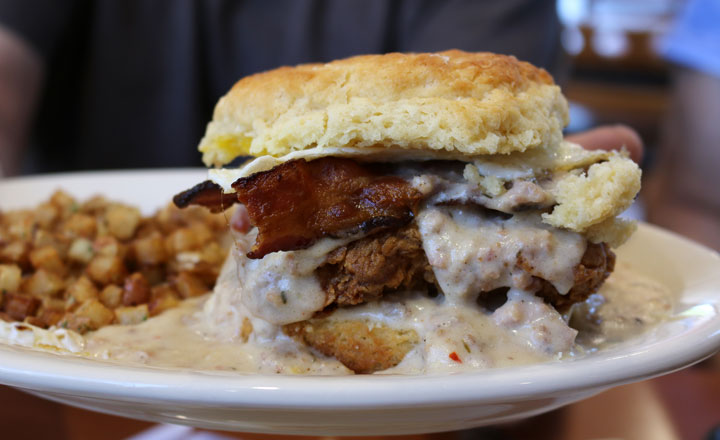 NOTE: While the Gibson location of Strips Biscuit Co. has closed. Stripes Biscuit Co. can still be found at 8050 Academy Rd NE # 101. Additionally, there are a number of Stripes Burrito Co. throughout the city and in Rio Rancho.

Southern humorist Jerry Clower once quipped “One of the saddest things is the sound of them whomp biscuits being opened in more and more houses these days. Whomp! Another poor man is being denied homemade biscuits. No wonder the divorce rate is so high.” There’s more than a bit of underlying truth to Clower’s humor. Southerners take their biscuits seriously. “Whomping” or “whacking” biscuit cans on the kitchen counter to open them is akin to parents letting their children answer their Memaw with “yeah” and “nope” instead of “Yes, ma’am,” and “No, ma’am.” It just isn’t done!

Southerner Belinda Ellis, author of Biscuits: A Savor the South Cookbook expresses it succinctly: “I learned that deep in the soul of a biscuit, there’s more than the flour, fat, and milk. A hot biscuit embodies a memory of place and family.” Her heartfelt tribute to the biscuit is one with which anyone raised or who has lived in the South can relate. In the South, dining is synonymous with family and friends getting together to share great food and warm conviviality. More loving and lasting memories are created during family meals–especially the quintessential Sunday Supper where biscuits are served–than virtually any other event.

New Mexico doesn’t have a storied biscuit tradition so you’ll excuse us if we do whomp biscuit cans on the kitchen counter. When we do, we certainly don’t respond like one of Pavlov’s dogs and wax sentimental about biscuits worthy of the Pillsbury hype that “nothin’ says lovin’ like something from the oven.” Biscuits are something we can make quickly when we don’t have enough time to make tortillas or sopaipillas. When we think “lovin from the oven,” we’re more apt to think about Pueblo bread fresh from an outdoor mud horno or green chile bread from the Golden Crown Panaderia. By the way, the aroma of tortillas on the comal or sopaipillas being extricated from scalding oil creates the same type of memories for us that homemade biscuits create for proud Southerners.

The Stripes Biscuit Company, which launched its doors in February, 2018, is making Duke City diners think twice about biscuits–not the type that gets their start from being whomped. Stripes biscuits are made from scratch. As the name on the marquee so vividly and patriotically declares, biscuits are the raison d’être for the unique in Albuquerque concept. Virtually every item on the menu–even desserts and entrees such as French toast–features biscuits in one form or another. You’ll be surprised at how versatile biscuits can be. You’ll be surprised at how delicious biscuits can be.

If the name “Stripes” evokes memories of the Bill Murray movie of that name, you’re on the right track…sort of. Stripes (the Biscuit Company) pays tribute to the enlisted men and officers who have served in the Armed Forces. Walls are festooned with photos of local veterans. Shadow boxes display decorations and medals, military insignias, a triangular folded flag and other items which honor America’s real heroes. I was invited to submit my photo (I flew a desk for eighteen years in the Air Force) for inclusion on one of the restaurant’s walls of honor, but declined because I want this restaurant to be successful and my unsightly visage might scare customers away. Fifteen percent of the restaurant’s profits are donated to the nearby Veterans Administration hospital. On the day of our inaugural visit, a manager proudly told us that on Friday (April 28, 2018), Stripes would be presenting a nine-thousand dollar check to the hospital. For me that’s reason enough to return.

That patriotic, civic-minded spirit is undoubtedly one of the reasons so many of the restaurant’s loyal patrons are members of the Armed Forces stationed at nearby Kirtland Air Force Base or serving in the National Guard or Reserves. We watched with admiration and respect as several of them shared camaraderie and fellowship as they enjoyed huge portions of food, the centerpiece of which is the best biscuits in town. My Kim makes it a point to thank any service member she sees for their service to our country, a small kindness they accept with the humility and grace characteristic of my military brothers and sisters.

Stripes is the brainchild of veteran restaurateur Gary Hines who is probably best known for having founded both Hurricane’s Cafe and Twisters Burgers & Burritos, two very successful concepts still thriving today. After selling Twisters three years ago, Gary enjoyed a short-lived retirement until his “no compete” agreement with Twisters elapsed. The Stripes concept isn’t something he dreamt-up at the spur of the moment. Over the years he conceived of and discounted several ideas, always with the realization that what Albuquerque needed was not another burger and burrito joint, but something new and different. Stripes is certainly that!

The breakfast menu is a showcase for sandwiches constructed on a handmade buttermilk biscuit. Biscuit sandwiches and Biscuit plates are named for the military alphabet, a phonetically based system with which all movie-goers should be familiar: Alpha, Bravo, Charlie, Delta, Echo, Foxtrot, etc… Breakfast is served all day long and also includes traditional New Mexican favorites served with red, green or “flamin” green chile. Biscuit waffles and omelets are also available. The lunch menu also includes biscuit sandwiches and New Mexican specialties as well as fresh from the garden salads (served with a biscuit). Three biscuit-centric desserts are also available. To wash down your biscuits, consider a bottomless cup of New Mexico Piñon coffee.

23 April 2018: According to Christina, our wonderful server, one of the restaurant’s most popular biscuit sandwiches is the curiously-named “Coach B.” Subtitled on the menu as “our homerun biscuit,” it’s roughly the size of a cat’s head (a Southern term for old-fashioned southern style biscuits as big as….you guessed it). The canvas for this behemoth biscuit sandwich is a fluffy buttermilk biscuit in which are nestled a slab of buttermilk-fried chicken, bacon and Cheddar cheese topped with your choice of housemade sausage gravy or vegetarian mushroom gravy. If you want your homerun to be a grand slam, ask for a fried egg, too. This is low-calorie stuff, after all. All sandwiches are served with papitas, small cubes of fried potatoes.

The Coach B is probably not something you should eat every day and it did render me nearly comatose for a couple of hours afterwards, but it’s one of the very best biscuit-based sandwiches west of the Mississippi (east of the Mississippi, you have to go South Carolina for the “Charleston Nasty Biscuit” from the Hominy Grill). This isn’t a hand-held sandwich unless you don’t mind gravy and egg yolk running down your arms. It’s a calorific overachiever with diverse and rich flavors. The biscuit itself is formidable, more doughy than flaky. It’s a worthy platform for any sandwich. The buttermilk fried chicken is moist and tender, as good as any chicken outside my mom’s kitchen. The sausage gravy is assertively seasoned, not some wimpy Northern gravy.

23 April 2018: If you don’t like your biscuits quite as generously endowed as the Coach B, your best bet is a biscuit on the side served with honey butter and the house jam. The house jam is unlike any jam you’ve ever had. It combines the flavors and textures of strawberry jam and honey. Not since chocolate and peanut butter have two flavors gone as well together. Texturally, it’s a bit of a challenge to spread onto the biscuit, but most good things require a bit of effort and skill. Because no biscuit can possibly have enough honey, the butter is also flavored with it.

27 May 2018: We’re always wary of the term “Creole style” because it’s so subject to interpretation. Sure, Creole constitutes a “melting pot” inclusiveness, but all too often interpretations are rather liberal. The term Creole finds its genesis in the Spanish word “criollo, which roughly translates to “native” or “local.” True Creole style cuisine, the way it’s prepared locally, natively in Louisiana, relies on red peppers, mustard, allspice, okra and garlic as well as the “holy trinity” of bell pepper, celery and onion” with lots of tomatoes for good measure. Some of these elements are apparent in the Creole Style Meatloaf biscuit. The meatloaf is made with plenty of tomatoes and a plethora of holy trinity ingredients. Having had similar meatloaf on the Mississippi Gulf Coast, we liked this one but make no mistake about it, the real star of this dish is the biscuit.

27 May 2018: Perhaps best illustrative of just how tall a sandwich constructed on Stripes’ housemade buttermilk biscuits can be is the 12-Hour Pulled Pork BBQ Biscuit Sandwich. Save for some politicians, there’s no way most of us mere mortals could ever bite down on one of these behemoth biscuit sandwiches. This is strictly a sandwich you eat with a fork. Atop the bottom half of the biscuit is a tangle of 12-hour pulled pork slathered with a thick barbecue sauce, coleslaw and fried onions. It’s an easy four-inch stack of too much food to consume in one sitting. In my Kim’s assessment, the tender tendrils of pulled pork had a nice smoky flavor, but the sauce was a bit overpowering.

23 April 2018: Though we’d eaten enough to feed a family of four, Christina spoke so lovingly about the fried chocolate biscuit sundae that we just had to try it. Only an additional scoop of vanilla ice cream could have improved this decadent dessert. Texturally, the fried biscuit is an interesting phenomena in that the biscuit maintains its integrity and doesn’t fall apart. Okay, maybe all that chocolate covering it like lava covered Pompeii has something to do with that. Good as this dessert was, next time we’ll stop at a second biscuit with that wondrous strawberry-honey jam.

Long-time Friends of Gil (FOG) members John and Zelma Baldwin (who’ve never steered me wrong) recommended Stripes Biscuit Company to me. As with other restaurants they’d previously recommended, this one is a winner. Huge portions (an understatement) of delectable homemade dishes, a rare civic mindedness and a pride in the fruited plain’s Armed Forces are just some of the reasons for which we’ll return. Those biscuits are, too.