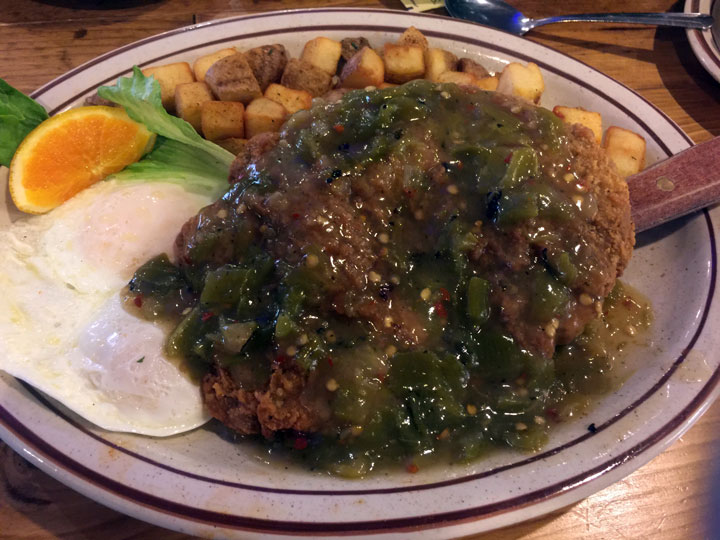 “The Copper Canyon of northern Mexico–a place so huge and desolate that even today
there are still some native people who have never seen an automobile.”
~Victor Villasenor
Beyond Rain of Gold

If you’ve ever watched the classic Humphrey Bogart movie Treasure of the Sierra Madre or read Victor Villasenor’s spell-binding tome, “Rain of Gold,” you’ve got at least a passing acquaintance with Mexico’s awe-inspiring Copper Canyon. Hidden in the Northern part of Mexico lies an astonishing system of gorges comprised of six vast canyons wider and deeper than the Grand Canyon. Although copper is mined in parts of the canyon, this geological wonder is named for the bronze-like patina of the canyon walls. The magnificent Copper Canyon landscape stretches 900 miles across Mexico and has become a very popular destination for adventurers.

Inquiries to friends and colleagues about the Duke City’s Copper Canyon Café gave me the impression it was as far distant and remote as the canyons for which it was named. My friend Bruce “Sr. Plata” Silver joked that perhaps because the Café is located in Albuquerque’s International District, diners may have surmised that a passport is needed to visit. A solid four star rating on 53 reviews, some with effusive praise, validated that Yelp reviewers have made the trek to Gibson Blvd. and most are very happy they did. We’re talking Yelpers from across the fruited plain, included Hawaii and Alaska. Shame on me and people in my circle for not having visited this Copper Canyon earlier.

Frankly, it took a search for chicken fried steak to prompt my initial visit. As always, my friend Sr. Plata is game whenever an opportunity presents itself to have chicken fried steak, one of his very favorite foods. We encountered a packed parking lot on the early Tuesday morning of our inaugural visit—more validation that many people frequent this cafe. Copper Canyon lives in a space that was once an International House of Pancakes. It’s just east of the old Lovelace hospital on Gibson, a couple miles from the west entrance to Kirtland Air Force Base. Our server told us owner Pete Rallis has an extensive restaurant background, previously having owned the Fourth Street Café (fittingly on Fourth between Central and Copper).

Burnished copper mesas wall hangings festoon some of the café’s walls, a reminder of the natural wonder for which it is named. A display case shows off several tempting baked goods, all drool-worthy. The tinkling of spoons as they stir cream into freshly-brewed coffee is a comforting sound for those of us who don’t feel alive until our first cup or six. Copper Canyon serves Farmer Brothers coffee, a solid brand very popular in cafes and diners. Knowing our inaugural visit was for chicken fried steak, we gave the menu only a cursory perusal, but noted it offers several New Mexican dishes as well as American comfort food favorites, burgers, sandwiches, soups, salads and luscious desserts. Copper Canyon is open for breakfast, lunch and dinner.

Chicken fried steak at Copper Canyon will sate you all day long. It’s a solid eight-ounces and at least a half-inch thick. Because chicken fried steak is never enough, the plate also includes your choice of hash browns or papitas, pancakes (three of them) or toast and two eggs prepared any way you like them. You can have your steak smothered in a country gravy flecked with pepper or a New Mexico green chile our server recommended very highly. Diversity is the spice of life. Sr. Plata had his chicken fried steak with the country gravy, pinto beans instead of potatoes and pancakes. Our server had me at “great green chile.”

Why didn’t we try Copper Canyon sooner, we lamented as we enjoyed some of the best chicken fried steak in the city. A kryptonite-colored green chile blankets the chicken fried steak.  That chile has a nice endorphin-generating heat and delicious roasted flavor.  As generous as the chile serving was, New Mexicans can never have enough.  Next time, I’ll ask for enough chile to slather over the two eggs over-easy and two slices of rye bread toast.  Only the papitas, little cubes of golden fried potatoes, would be spared.  I’ll let Sr. Plata describe his  plate on his page, Sr. Plata’s Chicken Fried Steak Trail.

If that chicken fried steak and especially that green chile are any indication, Copper Canyon should be on the radar of diners throughout the Duke City.