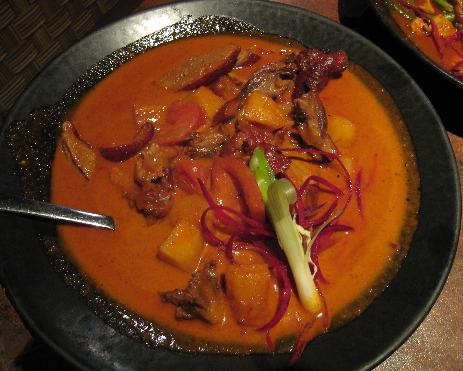 Many a time have I luxuriated in the pleasures of a memorable repast at a restaurant outside of New Mexico and found myself thinking “if only these tastes were available back home.”  I typically then fantasize about bringing those tastes to the Land of Enchantment myself.  Alas, lofty intentions, a profuse lack of culinary talents and the absence of the capital necessary to realize my fantasies subsume those dreams and I instead yen for future visits to restaurants whose incomparable tastes have captured my reality.

In Deirdre Pain, I found someone through whom I can live vicariously.  An aficionado of Thai food, she became disillusioned with most Thai restaurants, many of which lacked wine lists and whose wait staff struggled mightily with English.  In 1987 with the launch of Malee’s Thai Bistro (affectionately known as Malee’s on Main), she created an upscale venue for the exceptional cuisine of a favorite chef.

Today Malee’s on Main is one of the most popular and highly regarded (earning a “24” rating on Zagat’s) Thai restaurants in the Phoenix area.  Housed in a circa 1921 building with a colorful history, Malee’s is only one of few restaurants on Main Street, denizen for a veritable pantheon of art galleries (similar to Santa Fe’s own Canyon Road).

Like many upscale Thai restaurants, one of the things that sets Malee’s apart is its commitment to preparing and serving edible art.  Each dish is shaped into expressive works that reflect the lifelong training of chefs who have honed their culinary craft to an appealing visual medium.  Ever conscious of esthetics, chefs’ plating emphasizes a balance of color and texture with unfailingly fresh ingredients.

Malee’s is also very accommodating to strict vegetarian preferences with a menu replete with healthy choices.  Most entrees can be prepared “mild,” but the menu includes a disclaimer indicating curries are spicy by nature.  Adventurous sorts might opt for Thai hot, an incendiary level high on the Scoville unit level.

An entire page on the menu is dedicated to appetizers, lettuce wraps and rolls, soups and salads and you’ll want to dedicate several visits so you can sample them all.  At the very least, your meal should include a precursor of two appetizers.  My carnivorous friends might find it blasphemous that I would recommend two vegetarian appetizers, one of them being fried tofu, the banal bane of meat-loving men everywhere.  Served on a bed of fresh lettuce and sweet miso are several cubes of spongy tofu offered with a wonderful peanut sauce.

Another excellent antecedent to your entrees are Malee’s fresh veggie rolls in which rice paper houses smoked tofu, carrot, cucumber and mint.  The veggie rolls are served with a peanut-hoisin sauce that balances sweet, savory and piquant tastes.  Step into any of the neighboring art galleries and you might not find such a work of art–both in presentation and in taste.

If there’s only one element of a meal at a Thai restaurant that may be lacking, it’s in the absence of some sort of bread to use for sopping up some of the fabulous broths left over after you finish an appetizer.  Sure, you can imbibe the broth like a soup, but bread would make it even better. Take for example, the broth served with Malee’s steamed mussels.  It’s concocted from lemongrass, kaffir lime leaves and other complementary ingredients.  A nice loaf of bread to dredge up all remnants of that ambrosiatic broth would have been heavenly.

What is especially beguiling about this particular broth is how it allows the mussels to speak for themselves.  It does not detract in the least from the mussels inherently slightly sweet, slightly briny taste. Perhaps even better is the broth served with the basil curry clams, another terrific appetizer.  It’s a broth constructed of garlic, chili peppers, curry powder and fresh basil and it’s pure, unadulterated pleasure.  Similar to many Thai dishes, it excites your taste buds with sweet, savory, tangy and piquant flavors.

Another vegetarian appetizer, albeit one that originated in America and not Thailand, is Crab Rangoon, eight deep-fried dumplings engorged with cream cheese, crab meat and scallions wrapped in wonton wrappers then deep-fried.  Though more often served in Chinese restaurants than in Thai restaurants, a commonality among many of these deep-fried gems is a cream cheese sweet enough for cheesecake.  That’s not the case with the Crab Rangoon at Malee.  The cream cheese is most assuredly savory and there’s plenty of it in each square-shaped dumpling.  As good as the Crab Rangoon is, the sake tinged raspberry sauce is cloying, almost candy sweet.

Malee’s rendition of duck curry is the second best I’ve ever had behind America’s most celebrated Thai restaurant, Lotus of Siam in Las Vegas, Nevada.  It features tender slices of marinated duck simmered with fresh tomatoes (at Lotus, plum tomatoes are used) and pineapple in a creamy red curry.  At level 3 on a scale of 1-5, the curry will get your attention without being so fiery you can’t taste anything.  It’s a beautiful red-orange curry with an excellent balance of sweet, savory and piquant flavors.  It’s also of perfect consistency–not too thick and not too thin.  The duck is fatty enough for flavor, but not so fatty that it turns off your taste buds.  In all, this is an outstanding entree.

Another fabulous entree and relatively rare in Thai restaurants throughout the southwest is peanut curry with pork, a creamy rich peanut curry served over freshly steamed julienne green beans.  Wow!  Thai chefs have long combined the complementary flavors of curries and peanuts, but this dish is like the first joining of chocolate and peanut butter–an epiphany for your taste buds.  The secret to the deliciousness in this dish is balance.  The peanuty taste isn’t nearly as intense as the peanut sauce typically served with satay.  The curry isn’t nearly as intense and pungent as say, Indian curry.  Malee’s has managed to strike the perfect balance of flavors to craft an entree that brings out the best in its component ingredients.  The julienne green beans provide even further taste and texture contrast while adding an element of freshness and snap to each bite of each green bean.

During a visit in June, 2011, I hit Malee on an uncharacteristic off-night if the massaman curry with short ribs is any indication.  Massaman curry, an Islamic influenced mild curry from Southern Thailand is usually sweet (sometimes almost dessert sweet) with a pronounced coconut milk influence.  It’s traditionally cooked with beef, potatoes, onions, carrots and peanuts (usually minced).  Malee’s rendition was very savory with very little sweetness, altogether a very good curry but it just didn’t taste like massaman curry.  The addition of short ribs made this dish even more appealing…at least when reviewing the menu.  Alas, the short ribs were tough, sinewy and very tough to cut into.  It’s the only dish I’ve had at Malee which should be considered pedestrian.  Worse, at a level 4 piquancy, any heat barely registered on my taste buds.

The dessert menu is limited, but any of the sweet offerings would tempt you off a diet.  If the Candied Ginger & Raspberry Crème Brûlée is any indication, dessert is not to be missed.  As with the main entrees, there are a lot of taste and texture sensations going on with this dish.  Break through the top layer of caramelized sugar to the sweet, custard-like filling then to the bottom layer of raspberries and scoop up layers of deliciousness that will have you closing your eyes like Ratatouille enjoying a fine cheese.  The flavor of ginger punctuates the entire offering, imbuing the sweetness with the delicate, refreshing quality only ginger can provide.

Although I may never own a cutting-edge restaurant and bring innovative cuisine to my native state, it’s refreshing to know such cuisine is available only a few hundred miles away.  My fondest wish is that my last visit was an anomaly and Malee’s will recapture my taste buds.