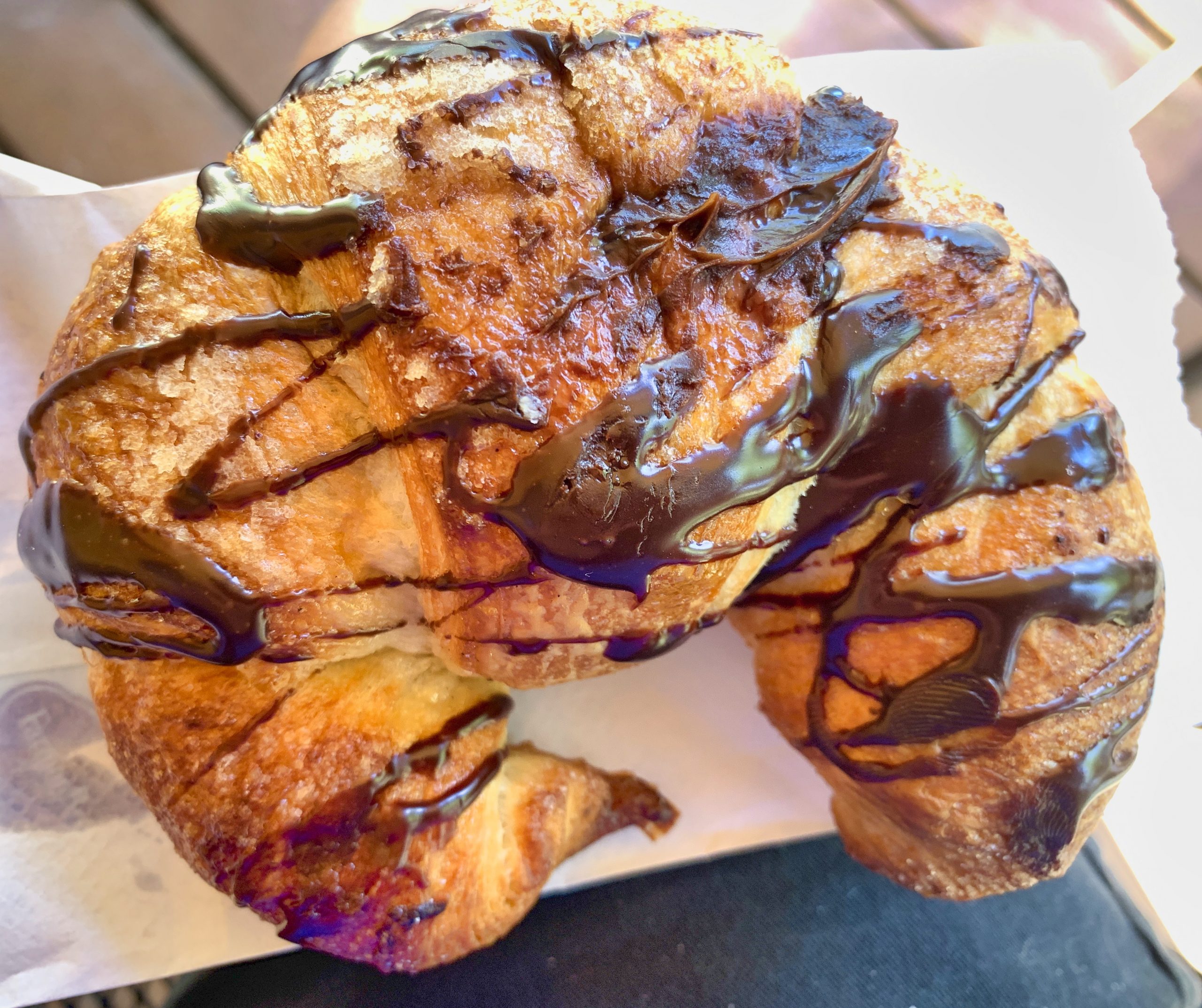 Texas, the Lone Star State slogan tells us, is “like a whole other country.”  Everywhere we turned during our weekend in Ruidoso, we espied oversized pickup trucks sporting Texas license plates.  It almost made us wonder if the “village of the noisy river” had been annexed into that whole other country.  The trend continued at the unholy hour of 8AM on a cool Sunday morning when the license plate for almost every vehicle in The Cornerstone Bakery & Cafe’s parking lot flaunted the familiar “Lone Star State” logo.   Ironically, when we had asked where locals went for breakfast, the answer was almost invariably The Cornerstone Bakery & Cafe.

Lest you think I may be a bit xenophobic or paranoid about Texas,  nothing can be further from the truth.  Being around Texans is an opportunity to discuss two of my favorite things in the world–the Dallas Cowboys and Texas barbecue.  Not surprisingly, diners at two of the socially distanced tables under the large tent where we dined were happy to oblige.  In addition to discussing our mutual passions, we discussed the attraction of Ruidoso to denizens of Dallas, Denton, Dalhart and other Texas cities.  “There’s nothing like Ruidoso anywhere in Texas,” they admitted.

There are probably very few, if any, restaurants like The Cornerstone Bakery & Cafe in Texas either.  There certainly aren’t many in the Land of Enchantment.  The Cornerstone has been serving the village of Ruidoso since 2004, garnering a loyal following that includes my friend Steve Coleman of Steve’s Food Blog.  Steve believes that while “almost everything tastes better in the mountain air of Ruidoso,”  the high quality of the baked goods at The Cornerstone warrants a visit (or ten).  My hope is that there are no lockdown conditions in place when you visit.  That way you can glance lovingly at the pastry case under which some of the most pulchritudinous pastries in New Mexico are on display.

A true bakery with an extensive deck-style steam-injected oven that infuses breads with more flavor and texture, Cornerstone offers such fresh-baked artisanal breads as roasted garlic and rosemary, Asiago cheese, raisin pecan, sun-dried tomato and basil, and a heartier multi-grain loaf.  The pastry menu offers confections that may actually replace coffee as the best reason to wake up (though Cornerstone has a very good coffee menu, too).  Cream pies (lemon meringue, chocolate cream, coconut cream) and fruit pies (apple, peach, cherry and mixed berry) are available to eat in as well as take home.  You can also ferry home decadent cakes (including an Italian cream cake).

Since first experiencing pain au chocolat (literally chocolate bread) in Boulogne-sur-Mer in Northern France half a lifetime ago, it’s been a veritable addiction.  Rarely (maybe never) do we visit a French bakery when at least two pain au chocolat don’t accompany us home (though quite often they don’t make it as far as the car).  When pain au chocolat isn’t available, its cousin, the chocolate croissant is a worthy and welcome replacement.  The similarities between the two begin with the layered, yeast-leavened dough, usually light, flaky and buttery.  Cornerstone’s version of the chocolate croissant will stand up to any we’ve had at French bakeries across the fruited plain.  Not only does the chocolate center elicit swoons, chocolate is decoratively drizzled on top.

My affection for pain au chocolat is matched only by my Kim’s love of cinnamon rolls though she’ll be quick to tell you that in most cases the term is a misnomer.  You have a better chance of finding Forrest Fenn’s cache of gold and jewels than you do of finding cinnamon on a so-called cinnamon roll.  Her quest for cinnamon satisfaction finally achieved fruition with the Texas-size cinnamon roll at Cornerstone.  This gooey, icy behemoth–one cinnamon roll covers a plate–could be breakfast for two or more hungry people or for my Kim alone.  It’s got a week’s worth of calories and will probably give your teeth another cavity or two, but boy is it decadent and delicious…and it’s got plenty of precious cinnamon.

Since men, women and children can’t live on pastries alone (though some of us would be willing to try), The Cornerstone has a full menu of breakfast and lunch entrees.  Breakfast on a cool weekend morning is a treat, even when it’s under a tent in the parking lot.  The breakfast menu offers a phalanx of American and New Mexican dishes as well as an intriguing fusion of cultural cuisine creations such as the Carrizozo crepe (two tender homemade crepes filled with lean ham, Swiss cheese and soft scrambled eggs topped with classic Hollandaise sauce).  It’s been a long time since we’ve had Hollandaise sauce without green chile so this was a real treat.  So were the pan-fried potatoes, cubes of salty deliciousness we usually call papitas.

“Knock it off, Napoleon! Make yourself a dang quesadilla!”  Only Napoleon Dynamite’s grandmother could possibly be so dismissive about one of the most versatile and delicious anytime meals.  She probably could never envision something as good as the Alto Breakfast Quesadilla (eggs scrambled with bacon, green onions, tomatoes and cheese lightly grilled between fresh flour tortillas served with salsa, sour cream, pan-fried potatoes and pinto beans).  Even without New Mexico’s sacrosanct green chile, it’s a very good and very filling breakfast entree.

If there’s one aspect of the Cornerstone Bakery & Cafe that’s most common to both Texas and New Mexico, it’s how friendly and attentive the wait staff is.  Only at Joe’s Pasta House in Rio Rancho have we experienced such warm and personable service.   It’s just one of many reasons New Mexicans and Texans alike frequent this paragon of pastry, bakery and restaurant deliciousness.