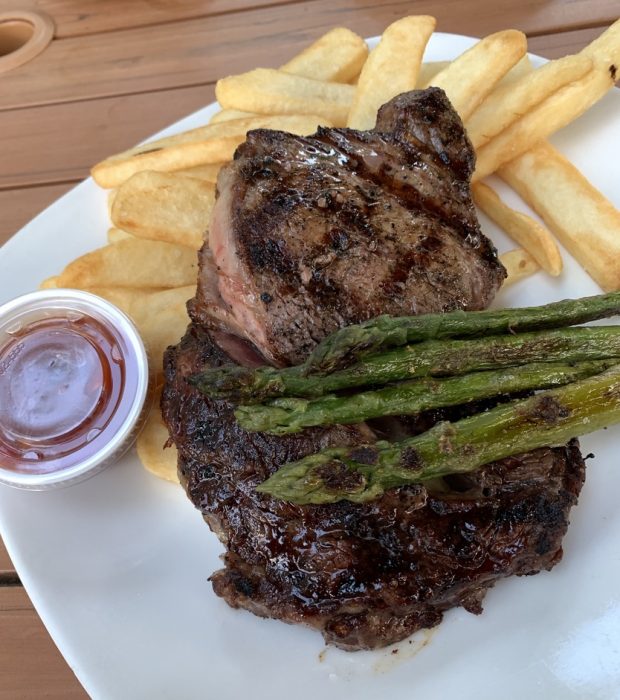 In her correspondence with her best friend, Georgia O’Keeffe lamented that she “always has a hard time finding words for anything.” When it came to relaying her awe at the sensory wonder surrounding her in Abiquiu, O’Keeffe was never at a loss for words.   With a prosaic ease, she described her isolated idyll as “the most beautiful place you can imagine.  It’s so beautiful there.  It’s ridiculous.”  Her passion for the surreal topography, juniper laden foothills and the sheer energy of the Southwest shimmered with growing vibrancy when she wrote of them.

When her heart finally surrendered to the soul-touching experience of spectacular sunsets giving way to a night air swathed in a canopy of stars, she wrote her friend: “Tonight I walked into the sunset — to mail some letters — the whole sky — and there is so much of it out here — was just blazing — and grey blue clouds were riding all through the holiness of it — and the ugly little buildings and windmills looked great against it.”  Visit the idyll Georgia O’Keeffe called home and like her, you might find yourself lacking words adequate enough to describe what you’re experiencing.

One of Georgia O’Keeffe’s paintings became a pop culture phenomenon with a cameo on the the third season of Breaking Bad when meth maven Jesse Pinkman and his girlfriend Jane Margolis debated “My Last Door.”   Jesse argued that O’Keeffe painted the same door over and over in an attempt to achieve perfection, a concept the mercurial entrepreneur didn’t understand.  Jane countered with the more perceptive observation that what O’Keeffe was trying to do was make a good feeling last.  Though your memories of any visit to Abiquiu will last a lifetime, your stay in O’Keeffe country will likely be much shorter.

You’ll want to ensure your lodging is a polestar, a hub from which you can set off to take in your surroundings with accommodations which respect and blend into the topography.  My highest recommendation is for Casita De Chuparosa, set among dramatic panoramic views of Pedernal, Georgia’s oft painted “private mountain” and within easy walking distance to the meandering Rio Chama.  Another gateway, one adjacent to the O’Keeffe: Welcome Center, is the Abiquiu Inn which offers a variety of  lodging choices.

Adjacent to the Inn is Cafe Abiquiu & The Terrace which Lonely Planet describes as “the nicest place to eat for miles around.”   Only In Your State expressed similar and more complimentary sentiments: “This restaurant way out in the New Mexico countryside has the best doggone food you’ve tried in ages.”  Not only does the sophisticated menu both honor and belie Abiquiu’s bucolic surroundings, the covered terrace is one of the best al fresco dining venues in the entire Land of Enchantment.  Even on a warm summer night, you’re well shielded from the sun’s searing rays.

Cafe Abiquiu is open for breakfast, lunch and dinner, offering casual dining in the aforementioned terrace or in a small dining room adorned with the work of local artists.  The menu is replete with housemade fare including traditional Northern New Mexico favorites, delightful desserts and a delightful specialty espresso service.  As we approached the Cafe on a balmy Friday evening, it was the aroma of steak grilling that confirmed we made the best dinner decision possible.  The Cafe was rather busy, but an energetic service staff operated with efficiency and alacrity.

The “small plates” section of the menu lists seven appetizers including hummus and avocado toast.  Our selection was the elote dip, a three cheese Mexican street corn dip served with blue and yellow corn chips.  We debated whether or not Georgia O’Keeffe would have liked this dish.  The adventurous painter was known to have been an avid gardener whose recipes were rather simple and replete with natural ingredients. The dip is rather simple, its ingredients natural and it’s a delicious way to start a meal.  Our server graciously gave us a copy of the recipe, confirming the three cheeses were cream cheese, Parmesan and Cheddar.  The sweet corn is emboldened by both cayenne and chile powder, but this dip probably has less heat than most con queso.  We actually ran out of chips fairly early on, but happily enjoyed the remainder with spoons.

In 1922 Georgia O’Keeffe complained that critics “make me seem like some strange unearthly sort of creature floating in the air—breathing in clouds for nourishment—when the truth is that I like beef steak—and like it rare at that.”  Though my Kim is the most down-to-earth antithesis of Georgia, she loves a good steak, too…and the grilled twelve-ounce ribeye with compound butter perfumed the air with an aroma not even Odysseus could have resisted.  That aroma was a prelude to a slab of beef prepared to our exacting specifications–medium, not rare.  The compound butter had melted onto the steak, an improvement over most compound butter which, while seemingly just out of the freezer, tends to be plopped on top of a steak.

Dinner entrees are served with soup or salad, vegetable and your choice of mashed potatoes, French fries or sweet corn polenta cakes, the latter of which my Kim wouldn’t eat if they were smothered in chocolate sauce.  French fries, it was.  Not quite Texas-sized, these fries were thicker planks than the flaccid, anemic fries  all too often served with steak.  Our vegetable was grilled asparagus drizzled with a light balsamic.  You won’t go away hungry if you finish a dinner plate and I have yet to mention the soup.

Food Network glitterati Ina Garten considers grilled cheese and tomato soup the ultimate comfort food pairing.  She must have had a tomato soup in mind much like the thick, creamy tomato bisque with blue corn tortilla strips strewn atop.  If we left the table with one regret it’s that we didn’t ask for a bowl-sized portion.  A cup of this enchanted elixir just isn’t enough.  Best of all, the bisque is served hot, not warm or lukewarm.  Luxuriating (much like a Calgon escape) best describes the happy experience of enjoying this soup.

The book A Painter’s Kitchen: Recipes from the Kitchen of Georgia O’Keeffe highlight the legendary artist’s creativity in the kitchen where she took great pride in her healthy culinary style.  O’Keeffe enjoyed both fruit and salad at noon and for her evening meal.  In Cafe Abiquiu’s strawberry field green salad (New Mexico pistachios, roasted almonds, pickled onion, strawberries, Cotija and lemon vinaigrette), we enjoyed both.  Every element of this salad was fresh and delicious with just enough dressing to accentuate the natural flavors of each item.  We’d like to believe O’Keeffe would have enjoyed this salad.

She probably would have enjoyed the unique dessert we chose, too.  The burrata cheese and strawberries drizzled with lemon and honey is described as “for that less dolce dessert experience.”  It was our first time enjoying burrata (an unnaturally soft and moist fresh Italian cheese made from cream and mozzarella) as a dessert of sorts. Translated to “buttered,” it bears a strong resemblance to mozzarella, but is much softer and when penetrated by a knife or fork, has an interior that spills out, revealing unctuous, stringy curd and fresh cream.  Because the strawberries were rather tart and the lemon and honey influence was tempered by more dominant flavors, the burrata was most definitely the star of this “dessert.”

Though Cafe Abiquiu wasn’t around when Georgia O’Keeffe made Abiquiu her home, we’d like to think she would have enjoyed the stunning views from the Cafe’s terrace and the food, too.  We certainly did.