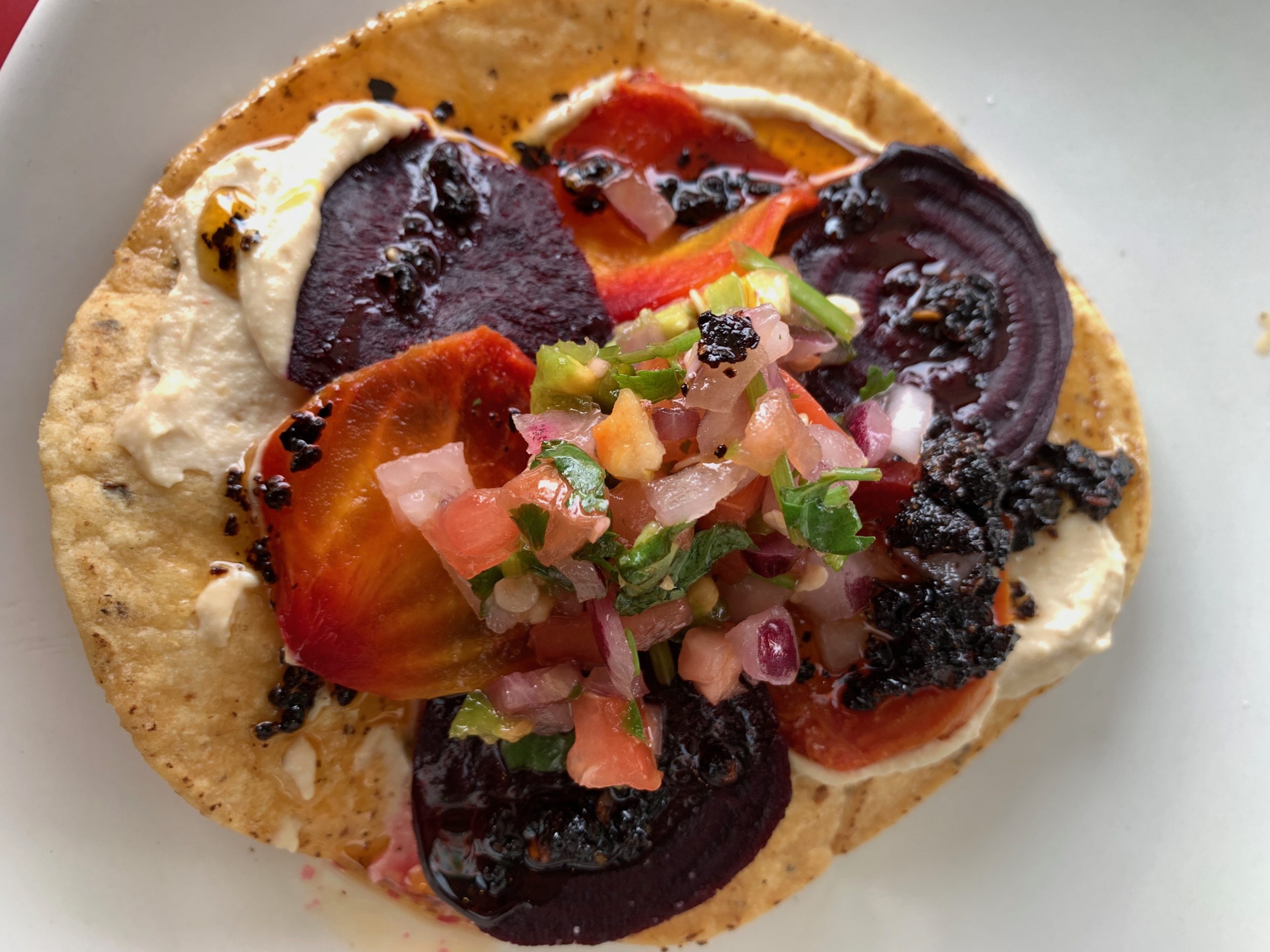 if you believe the idea for delivery food started with Domino’s Pizza and its promise of 30-minute delivery or free, you’d be sadly mistaken.  Nor did take-out originate with Chinese restaurants in California and their wire-handled white paper buckets. Both delivery and take-out food predate the fruited plain by several centuries. Take-out had its genesis back in ancient Rome with the creation of the thermopolium, essentially a street kitchen.  The thermopolium provided the only opportunity to purchase ready-to-eat food for citizens who couldn’t afford a kitchen of their own.  Hot food was stored in big clay pots inserted in a counter and likely served in a manner similar to modern fast foods.

On the other side of the globe and closer to the Land of Enchantment, another ancient civilization, the Aztecs of Mexico, had gigantic open air markets. Within these markets vendors sold “to go” food, mostly tamales.  These markets were the progenitors of the street food markets still so plentiful throughout the Land of Montezuma.  Neighborhood and citywide markets–both covered and open-air–offer wide-ranging and delicious regional food, selling everything from tacos to chapulines (grasshoppers) to huitlacoche (corn smut) and so much more.

Though not quite as ancient a practice as take-out cuisine, delivery food has existed for hundreds of years across many cultures. Butchers in 14th century Paris would frequently have their wares ferried directly from the butcher’s block to the homes of the city’s well-heeled families.  Perhaps the most famous (and one of the first recorded) instance of food delivery comes from Italy in 1889, when King Umberto and Queen Margherita called upon Raffaele Esposito to deliver a pizza to them at their palace in Naples.  That pizza, of course, was named for the Queen.

The advent of COVID-19 has forced restaurants throughout the world to shut down their sit-down service, remaining open to provide takeaway and delivery service for customers. With social distancing the new norm, diners are actually clamoring to have take-out food delivered. Third-party delivery services such as Albuquerque-based delivery service Selflane are partnering with businesses large and small.  One source indicates global food service delivery sales more than doubled from 2014 to 2019, and 52% of global consumers are comfortable ordering from a delivery-only restaurant with no physical storefront.

Primed to be a major player in the food delivery market are “ghost kitchens” cooking facilities that produce food only for delivery with no dine-in or customer facing areas.  It’s a market poised to create a $1 trillion global opportunity by 2030.  According to Euromonitor data, there are some 1,500 ghost kitchens in the United States, placing it far behind China (7,500+) and India (3,500+).  Out of one single facility, ghost kitchens can run many different menu concepts that customers see as different restaurants when they order online via food couriers.  Think of a ghost kitchen as a sort-of modern day thermopolium only with delivery.

Urban Cocina, the Duke City’s very first ghost kitchen launched in June, 2020.  The brainchild of restaurateur Hanif Mohamed and chef extraordinaire Dennis Apodaca, Urban Cocina brings together a variety of great concepts at a single location for easy delivery.  An easy-to-use online menu allows you to place your order and expect delivery within thirty minutes wherever possible (within a ten-mile radius).

Urban Cocina operates out of the First Street venue which housed the fabulous Urban Taqueria.  If you were an aficionado of New Mexico’s most unique, fun and delicious tacos, you can still find them at Urban Cocina.  Urban Taqueria is just one of nine restaurant concepts operating under the umbrella of Urban Cocina.  In fact, it’s the first concept listed on the menu and it’s subtitled “A mesh of tradition with modernism.”  You can still enjoy tacos all day, everyday with fresh corn and flour tortillas made on the premises by the talented tortillera Maria.

Nuevo Latino, the second concept listed on the menu offers “a blend of Native American, Spanish, and Anglo tastes. Shares traits with Mexican and Tex-Mex cuisine, distinctive flavors.”   Here you’ll find egg sandwiches, breakfast burritos, chile rellenos and huevos rancheros.  The third concept, Pan Blanco poses the question “Is a torta better than a taco?” and invites you to “Try one and see!”  In this section of the menu, you’ll find tortas as well as hamburgers and even hot dogs.  The Tikka Hut concept showcases eastern flavors, curries and kebabs, proving “deep flavors and enticing spices are the building blocks of eastern cuisine.”

T-Mac & Cheese, the next concept on the pantheon of concepts brandishes America’s favorite comfort food in traditional and avant-garde ways.  The Build Your Own Bowl concept allows you to be creative in building your own salad around the ingredients you crave.  Then there’s the Nuevo-Vego concept, a fusion of “Middle eastern influences on an all-vegetarian (often vegan) selection.”  The General Store is where you’ll find a panoply of gelatos, sodas and energy drinks.  Because our four-legged fur babies also need to be pampered, the Pawsome Snacks concept offers a variety of healthy, delicious snacks for your pets.  They’re Dude-approved.

21 August 2020: As excited as we were to try the compelling new concepts, I’ve literally been dreaming of Urban Taqueria’s fabulous slow-roasted lamb birria and Dennis’s transformative mole.  The exciting new options would have to wait.  Accompanied by Maria’s magnificent grilled corn tortillas and buttery, ripe avocado slices for the construction of tacos, the birria is resplendent in its deep, earthy redness and luscious with its piquancy.  The mole, by the way, has its basis on a 338-day “starter.”  That is, the “base” left over from the previous day to which Dennis adds seasonally available products, never in exactly the same combination. Dozens of different ingredients have added to this mole masterpiece,  giving the blend a lively and slightly different character each day.

21 August 2020: My Kim’s introduction to Urban Cocina’s culinary versatility was in the form of an East meets West, vegetarian meets carnivore combination of an avocado tostada (fried corn tortilla topped with a hummus spread, ripe avocado slices and escabeche (pickled vegetables)) with chicken tikka rice (tender boneless chicken pieces marinated in a creamy mild sauce with garlic, ginger and Indian spices).   Dennis described the tostada fusion as simple, but delicious.  That’s underselling just how well this combination went together.  The chicken tikka rice, in particular, was so flavorful, my Kim had to have it the following day.

22 August 2020: A study by a professor at the University of Buffalo revealed that “comfort foods tie into memories of our childhood. We don’t necessarily love Mom’s mac ’n’ cheese because we’ve been eating it for years, but because our associations with the food also have positive associations with the care she gave us.”   It’s unlikely many mothers created as many versions of mac ‘n cheese as Urban Cocina does–a very lucky thirteen.  My mom certainly never made anything like the Sizzling Bayou Hot mac n cheese (classic mac ‘n cheese, spicy hot chicken, house extra spicy sauce).  Dennis described the sauce as “our own Tabasco sauce without using Tabasco chiles.”  In spirit and in flavor, that house sauce does channel Tabasco very well.  We’ll forever have positive associations with the care Dennis put into creating a very memorable, very comforting, very delicious dish.  This is comfort food mac n’ cheese as well as it can be made.

22 August 2020: Having fallen in love with the chicken tikka rice, my Kim was quick to respond “Urban Cocina” when I asked where she’d like to have lunch the following day.  This time, she paired the life-altering chicken tikka rice with chicken tikka (grilled leg and thigh marinated in yogurt, garlic, ginger and Eastern spices).   Though not prepared in a tandoor oven, the infusion of aromatic Indian spices make it taste as though it was.  Grilled to a crispy golden-brown, the chicken is moist and succulent.  A bucket would have been nice.

22 August 2020: Tostadas aren’t something we tend to order often, maybe because most of them have a boring “sameness,” no real distinguishing qualities.  Urban Cocina’s Nuevo Vego menu certainly explores self-actualizing tostadas, making them as good as they can be.  Not even the most staunch carnivore will miss meat when enjoying one of the twelve vegetarian tostadas.  Among the most intriguing is the honey carrots and dates tostada.  A hummus spread on a fried corn tortilla makes a great canvas for the sweet, caramelized dates and the honey-glazed carrots.  Only in French restaurants have we enjoyed carrots as much as we did the honey carrots which perfectly balanced tenderness and crispness, sweetness and savoriness.

Another tostada exemplar which showcases the versatility of fried corn tortillas is the roasted beet tostada (fried corn tortilla, hummus spread, roasted beets, pico de gallo).  If you’ve conditioned yourself to believe you don’t like roasted beets, these will change your mind.  Roasting coaxes the sweetness out of beets and tempers their “earthiness” (some people say they taste like dirt).  The pico de gallo counterbalances that sweetness with savory-piquant notes.  Lest I be remiss, the hummus is as good as you’ll find anywhere in Albuquerque.  Hummus, too, is a very versatile condiment that pairs oh so well with the tostada.

The idea behind a ghost kitchen is to bring together a variety of great concepts at a single location for easy delivery.  Urban Cocina does so, preparing an incomparable diversity of deliciousness and flavors under one roof to deliver to your home.  Ghost kitchens are increasingly the wave of the future, the next step in the evolution of dining. It’s available now near you at Urban Cocina!