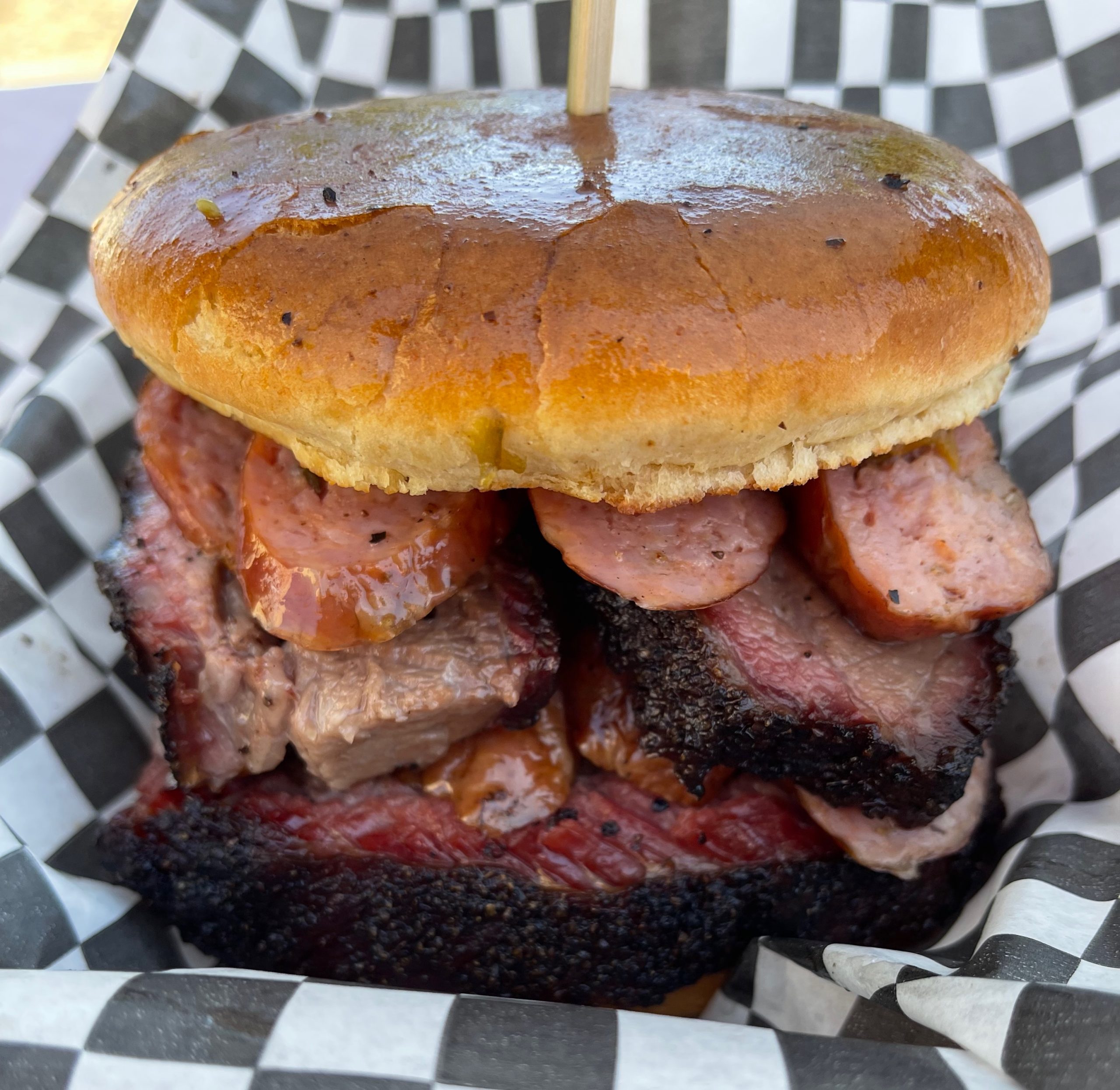 You might think that the food truck industry is an ultra-competitive dog-eat-dog business in which purveyors aren’t very gracious when discussing fellow food truck operators. Considering how they often jockey for a limited number of spaces in heavily trafficked events and vie for consumer attention and dollars, you would think they’d denigrate their brethren.  In an October 4th interview on the fabulous What’s Up Abq Podcast, Michael “Mighty Mike” Mondragon dispelled that notion.  Mike couldn’t have been more benignant about Albuquerque’s food truck scene, calling it a “community.”   He expressed tremendous admiration for both the owners and the food of Tikka Spice and Wing It Up (review pending), among others.

When asked “if you’re not eating your own barbecue, where do you go in town,”  Mike waxed poetic about his friend Manuel “Rev” Duran.  Mike appreciated that Manuel, who “who just started doing his trailer part-time because he’s a postal worker”…”has some real good barbecue” and “does it for the love.”  Ironically, just a few days prior to listening to that interview, my friend Bill Resnik had raved to me about Rev’s brisket, calling it “the best I’ve ever had.”  Over the years Bill and I have shared barbecue in Phoenix, Chicago, Kansas City and throughout the metropolitan area, so his opinion carries a lot of weight with me.

Similar to Mike, Manuel is a self-made pitmaster, an avocation which required assiduously studying and working hard to master the nuances and intricacies of his smoker, determining how different woods impart their unique imprint on meats, understanding which ingredient combinations make the best rubs, learning to carefully control temperature, getting prep techniques down pat to maximize efficiency and creating sauces and sides that complement his meats.  Like Mike, Manuel is passionate about his craft and is committed to serving the very best barbecue he possibly can.

Manuel’s low-and-slow journey began when he found a smoker at a garage sale.  Because he had no idea how to use it, he immersed himself in Google articles and watching YouTube videos.  Friends and family were happy to sample his handiwork which over time improved to the point that he felt ready to share his barbecue with the world.  He landed a few catering gigs (Bill was one of his early clients), garnering such enthusiastic acclaim that he launched “Rev’s BBQ,” the food truck (that’s mobile kitchen to you, Bob).

The “Rev” moniker, by the way, has nothing to do with being an ordained minister though if you’ve enjoyed his barbecue, it’s easy to believe he’s the bishop of brisket, shepherd of smoke, reverend of ribs, pontiff of pork and cardinal of chicken all rolled up into one.  He got the “Rev” sobriquet from friends because like a reverend, he knows everybody…and maybe because he’s “revved up” to smoke meats.  He’s been called Rev for about fifteen years so it made great sense that he’d use such a catchy name for his food truck.

Not only does Manuel now make his own smokers, fashioning them to his exacting standards, he and Melissa, his beautiful partner in barbecue and life, make everything from scratch: salsa, sides, rubs, desserts, sauces…everything but the utensils.  He and Melissa peel and roast the Hatch chile they procure from the Fruit Basket.  Manuel is especially proud of his brisket, going through 55-pounds of it in about two hours during the recent (October 17, 2020) 30-year anniversary celebration of The Scuba Company.    Brisket, he says, always sells out first.

17 October 2020: Brisket is a labor of love and a usurper of sleep.  Before the Scuba Company’s celebratory event where we first sampled the fruit of his labors, he was up all night lovingly babysitting his smoker to ensure the perfect brisket.  That’s not 10-12 hours of sleep deprivation (ribs “only” take 5-6 hours), it’s 10-12 hours of meticulous monitoring the low-and-slow magic of smoke meets meat.  It’s no wonder the “Rev It Up” brisket sandwich (onions, green chile, pepper jack cheese) is so good.  Without being fatty, the brisket glistens with rendered, flavor-rich fat coupled with a pepper smirched bark at the edges and a thin garnet smoke ring as a telltale sign that the brisket is cooked well.  Pecan, which he drives to Las Cruces to pick up, infuses its olfactory-arousing aromas to the brisket.  The brisket sandwich comes with two sides: baked beans (black beans), coleslaw and mac n’ cheese with green chile.  Both on the sandwich and on the coleslaw, the green chile has a definite New Mexican pleasing bite.

17 October 2020: Manuel may have made his reputation on brisket and ribs, but he can build an empire on the chicken quarters(drumstick and thigh).  My Kim is the chicken aficionado in the family so when she insists these are the best in New Mexico (even better than Mighty Mike’s), who can argue.   The chicken is melt-in-your-mouth moist and absolutely delicious with that light smoke flavor imbued by pecan wood.  She enjoyed it both with and sans sauce, a sweet-tangy concoction you’d happily drink up.

14 May 2022: Phil Rosenthal, the creator of Everybody Loves Raymond and the host of the popular Netflix travel documentary series Somebody Feed Phil (the only travel-food show I like)  believes “Food is the great connector, and laughs are the cement. If we go out to eat and have a nice meal, that’s one thing. If we can share a laugh, now we’re friends.”  Aside from my Kim, the person with whom I’ve probably shared more meals and laughs is Bill Resnik.  My friend Bill is one of the funniest people in the world, a former stand-up comedian with a gift for making people happy with his humor.  Joining us at our table was the Reverend himself Manuel “Manny” Duran, one of the most passionate and dedicated pitmasters I’ve met in years.

Manny shared that his food truck has really taken off and that often he’s got to put up “Sold Out” signs well in advance of when planned.  The catering side of his enterprise is also doing quite well.  Many of his guests are repeat customers (you might start off as the former and after one visit, you’ll be transformed into the latter).  Seriously, his barbecue is that good.  More than eighteen months had elapsed between visits (thank you cabrona virus).  We barely recognized the menu.  In the spirit of continuous improvement, Manny adds new items to the menu and takes the pulse of his customers to determine which should remain on the menu.

14 May 2022:  One of the stalwart standards that will never go out of fashion is brisket.  The Rev’s brisket warrants reverence.  It is of Texas barbecue quality.  One of the new ways in which Manny offers brisket is with a skyscraper-tall sandwich called The Big Reverend (One layer brisket next Italian sausage (yes, Italian sausage) then brisket then more sausage and topped with fresh New Mexico green chile on a toasted brioche bun with pepperjack cheese).  Only Food Network star Guy Fieri (and some anacondas) can open his mouth wide enough to take a top-to-bottom bite of this sandwich.  It is simply huge!  So is the flavor of all those great smoked meats.  As with all of Rev’s barbecue, saucing this sandwich is almost an act of desecration  Those smoked flavors sing, requiring absolutely no amelioration.

14 May 2022:  When my Kim and I used to drive to the Chicago area to visit her family, we would stop at the legendary Arthur Bryant’s in Kansas City where we’d pick up a rack of ribs to bring back to Bill.  So, when Bill tells me Rev’s ribs are the best he’s ever had, I had to try them.  During our visit in May, 2022, St. Louis ribs were available one per order.  I should have ordered a rack.  These are the very best ribs we’ve had in Albuquerque (even though Manny complained they were a bit tough).  They were NOT!  We lamented the notion that ribs should be “pull off the bone” tender.  That’s an indicative of ribs that are overdone.  Manny’s ribs require just a slight tug (as they well should) to extricate the morsels of delicious pork from its slippery cartilage.  These ribs are “close your eyes and swoon” good–competition quality.

14 May 2022: Also new to the Rev’s menu is an elote bowl (roasted corn, cream cheese, green onions) to which you can add brisket or pulled pork.  So that the focus of our dish would be the roasted corn, we opted not to add any of the Rev’s addictive smoked meats.  If it seems we always order elotes in every form in which they’re available, your observation is spot on.  We love elotes.  It also seems the cheese most often used on elotes is cotija.  Cotija is an excellent cheese to be sure, but we were intrigued by cream cheese.  Somehow Manny and his beauteous bride figured out how to make cream cheese crumbly like feta.  What a great find this was!  The cream cheese takes these elotes to an elite level.

17 October 2020: One of my biggest complaints about zucchini bread is that it often tastes like zucchini.  Zucchini is one of those ingredients used on bread because there’s typically a lot of zucchini to use up and the family is tired of every savory dish in which it’s used.   Zucchini bread is best when its slight bitterness is flavored over by spices, including a little sugar.  In all fairness to zucchini, it does add a lot of moisture to the bread.  The Rev’s zucchini lemon breadalso has the benefit of tangy lemon to make it more a composite bread than one showcasing zucchini.  This is the way all zucchini bread should taste.

Unlike many food truck operators across the Duke City, Manuel won’t be pursuing his avocation full-time–at least until he and Melissa both  retire from the postal service.  Yeah, I know you’re wondering if he’ll “go postal” should a customer not like his barbecue,  but he’s never had a single complaint about his barbecue.  That’s a trend not likely to change any time soon.  This is great barbecue, some of the very best in the Duke City.

NOTE: If you noticed far fewer misspelled words and grammatical errors, it’s because my friend Bill Resnik was a tremendous help in putting this review together.  Thank you, Bill.