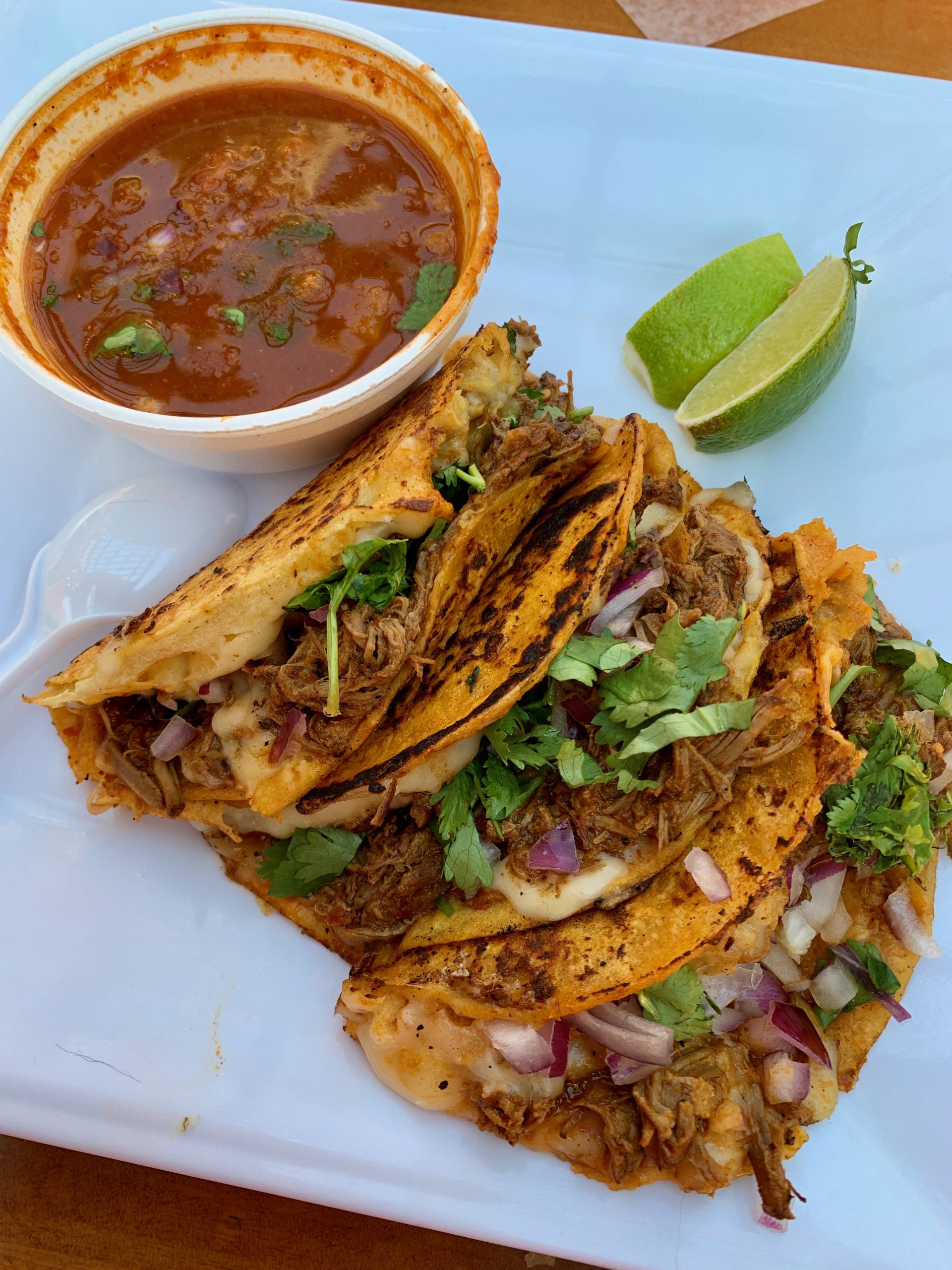 As an independent observer of the taco condition, I’ve often marveled at the versatility of the taco.  There appears to be no limit to what you can put between corn tortillas, flour tortillas and even lettuce leaves and still call them tacos.  Television personality and raconteur Anthony Bourdain, for example,  fell in love with tacos stuffed with young jackfruit and cauliflower at Trejo’s Cantina.  It begs the question “what can’t you put in a taco?”  We’ve established that ketchup has no place in tacos, but what about say, Welch’s grape jelly.  Sorry, Bob, that’s probably a no.

Most Duke City taquerias are playing it straight and traditional with New Mexican-style tacos (typically ground beef, shredded cheese, lettuce, tomatoes on a crispy shell) long having been supplanted as the preferred taco type by Mexican-style tacos.  Exemplars of Mexican tacos include El Cotorro, Don Choche Tacos Y Cerveza, Taqueria El Paisa and Taqueria Mexico, all of whom (mostly) hold fast to taco traditions and ingredients which originated in the Land of Montezuma.  In recent years, a proliferation of food trucks (that’s mobile kitchen to you, Bob) have entered the fray, giving Duke City diners an unprecedented variety of choices.

As with most popular culinary trends, New Mexico’s taco scene continues to evolve.  A KRQE News segment in August 2020 apprised viewers that “The latest taco craze has hit the Albuquerque metro. Restaurant owners say many of their customers have never heard of birria tacos but they’ve quickly become a best-selling item.”  The segment highlighted several purveyors of terrific tacos who offer birria, including Changos,Birrieria Y Tacos Alex Jalisco Style and Duke City Taco.  One commonality among the three is that all are relative newcomers to the metropolitan area.

Duke City Taco had its grand opening in November, 2019 at the former site of The Grill on Menaul.  The veteran-owned (Marine Corps) taqueria offers a build-your-own concept similar to Chipotle.  First you choose your dish: tacos (three per order), quesadilla (two corn or one flour), burrito, bowl or plate.  Step two is selecting your rice and beans: garlic and cilantro white rice, Spanish rice, black beans or refried beans.  Then you select your protein: carne asada, chicken, al pastor, shrimp and fish.  Finally, you choose your garnish: Romaine lettuce, cabbage, red onion, white onion, tomato and cilantro.  All dishes come with your choice of rice, beans and protein with vegan options also available.

Free chips and salsa for dine-in guests are an unexpected but welcome treat, especially since we’re taking about both red and green salsa.  The triangle-shaped chips are probably more ideal for dipping than for scooping, particularly those steam shovel-sized scoops I prefer.  They’re maybe just a bit on the thin side, but are fresh and low in salt.  Both the red and green salsa have a nice bite and offer a nice contrast in terms of flavor.  The green salsa has fruity notes and a pleasant piquancy while red chile flavor shines through on the red salsa.

Two items not on the online menu, but now standard fare are the aforementioned birria tacos as well as a carne asada pizza.  If you’ve never had birria, here’s a little primer.  Birria is a dish traditionally made with stewed goat or lamb meat.  Most restaurants on this side of the border typically use beef which is far more accessible.  Because goat was the original meat used, the dish called for a number of spices and aromatics in an attempt to obfuscate the gaminess of the goat.  The result is an indescribable depth of flavor and richness.

Though we’ve had birria (almost always with beef) a number of times in Albuquerque area restaurants, invariably the element that almost never comes across is the aromatics with the olfactory-arousing properties that make your mouth water before you even taste the birria.  Enticing aromas should always preface the arrival of your characteristically red-shelled birria tacos.  That crimson hue is courtesy of a rich braising liquid that permeates the tender birria and paints the corn tortillas.  Duke City Taco’s birria threesome is served with a side of hot consome for dipping and sopping.  It can get a little messy and you might find yourself sporting a birria mustache, but that’s just a trigger for pleasant memories later on.

It’s widely known that the method of cooking tacos “al pastor” (in the style of shepherds) is inspired from the way Lebanese settlers to Mexico spit-roasted meat, especially lamb.  Traditionally Tacos al pastor are made from thin strips of pork that have been marinated in spices (including achiote from where the red hue comes) and chiles then stacked onto a long spit called a trompo (Spanish for top). In many cases, a pineapple and onion are placed on top of the spit and their flavors penetrate the pork.

What isn’t known is how pineapple became part of the recipe. Pineapple certainly isn’t a Lebanese staple. As Chef Alex Stupak of the acclaimed Empellón Al Pastor pondered “Where the addition of pineapple came from remains one of history’s most delicious mysteries.”  Maybe we should just enough tacos al pastor without overly contemplating the pineapple matter.  Duke City Taco’s version is a good place to start, maybe because the flavor of pineapple isn’t prevalent.  Instead, you’ll experience the melding of delicate pork and spices in perfect proportion.

We’d like to think there’s more pineapple on the empanadas on the dessert menu, but Duke City Taco had run out of both its housemade apple and pineapple empanadas as well as buñuelos.  A good (but probably not as good as empanadas or buñuelos,) consolation prize was the chocolate pie with its chocolate Graham cracker crust and frothy chocolate mousse.

There’s a lot to explore and enjoy at Duke City Taco, especially birria tacos made the way they’re supposed to be made–with spices and aromatics that tantalize your taste buds. These are my favorite birria tacos in Albuquerque and might just become yours, too.