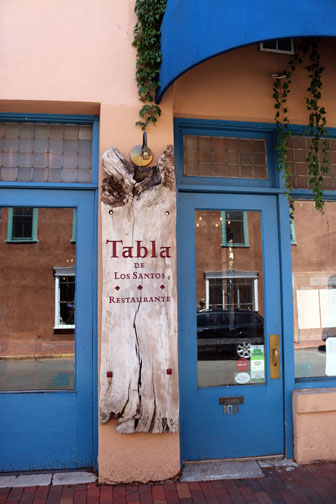 Professor Larry Torres, the brilliant historian, linguist and writer From Arroyo Seco is incomparable at spinning a yarn, especially when doing so in “Spanglish,” the without-a-pause blending of Spanish and English so prevalent among Latinos in the Land of Enchantment.  A few years ago in the Taos News, he told the story of a little South American boy staying with a family in Northern New Mexico who called home rather frantically begging to return home.  The little boy explained that New Mexicans are barbaric after overhearing that they cook and eat “chicos.

Obviously the little boy didn’t know that chicos is not only the literal translation of little boys, but a delicious favorite food of Latinos throughout Northern New Mexico and Southern Colorado.  Chicos begin as an ear of field corn which is tied into ristras (strings) and hung to dry or alternatively roasted in an horno.   The kernels are then removed and stored until cooking time.  When cooked (boiled in water), they swell up to their former size and taste like freshly smoked corn.  In combination with pinto beans, they are magnificent!

Chicos were a staple in bucolic Peñasco in Taos county where I grew up.  Much of the field corn we raised was reserved for chicos which we enjoyed at many a meal.  Farmers who grew chicos in volume sold to their neighbors, normally commanding a princely sum considering the intense preparation required to make them.  Today in Taos county, you can find chicos in grocery stores such as Smith’s.

It’s always surprised me that very few restaurants in Northern New Mexico offer chicos, many preferring instead to serve their more glamorous cousin posole, a hominy-based stew.  When chicos are on the menu, it doesn’t matter what else is because that’s what I’m going to order.  Unfortunately, it’s probably fortuitous that there are very few opportunities to order chicos at restaurants because they’d never compare to those made by my mom.

While perusing the menu at La Tabla De Los Santos at the Hotel St. Francis in Santa Fe, my eyes stopped at an entree called “Pastel de los Santos de Santa Fe,” a breakfast entree of poached farm eggs with potatoes on a bed of spinach with chicos, pinto beans from Rose Trujillo’s farm and red or green (or both) chile.  But I digress.  Let me tell you about La Tabla De Los Santos, the venue in which the brilliant chef Estevan Garcia is now plying his trade as only he can.

Tabla De Los Santos translates to English as “table of the saints.”  A tabla, unlike mesa, the more traditional term for table, implies a simple plank of wood.  The term is befitting of the stark ambience of the restaurant which, like the recently renovated Hotel St. Francis, was inspired by the early presence of Franciscan missionaries who founded Santa Fe.  Rather than creating an ostentatious or flamboyant over-the-top hotel, design elements focused on peace and tranquility in which utter simplicity abounds.  Not everyone in historically correct Santa Fe is thrilled about the renovations which some consider exploitative and inauthentic.

The Hotel St. Francis is Santa Fe’s oldest hotel, built in 1880.  It is on the National Registry of Historical Places and is a member of Historic Hotels of America.  Its Victorian-style edifice includes such details as rough-hewn wooden armoires and floorboards, all taking their cue from the sandal-shod sons of Saint Francis of Assisi who planted the seeds of Catholicism throughout the expansive New Mexican territory by evangelizing to a large population of native Americans and to other colonists who migrated to the new country.

Chef Estevan Garcia who presides over La Tabla De Los Santos is a former Franciscan monk himself (for four years) who retains a passion for the saints.  He’s also passionate about serving organic food, especially food grown locally by specific farmers with whom he’s cultivated relationships.  A Santa Fe native who spent years in the agrarian community of Dixon, New Mexico, Garcia festoons his menu with personal anecdotes about cooking with his grandmother.  The menu also highlights the names of area farms and farmers who supply the fresh ingredients in his food–like chicos.

Alas, the chicos may as well have been niblets of fresh corn shucked off the cob and prepared as you might any corn out of a can.  The chicos did not look or taste like the chicos with which I was raised.  They did taste like good corn off the cob so either Chef Garcia has found an elitist strain of chicos or he’s taking some liberties with a traditional Northern New Mexican staple.  At least he’s not serving wasabi fried potatoes with chile, a favorite of some contemporary chefs.

Despite my protestations about the chicos, the Pastel de los Santos de Santa Fe is an excellent breakfast entree, due in large part to the tongue-tingling red and green chile I requested.  The spinach is only mildly acidic, much like the quelites (which New Mexico resident and prolific author Deborah Madison calls a “happy green weed that we could also call a vegetable”) Northern New Mexicans consume with ardor.  It is a terrific complement to the poached eggs which were more firm and “meaty” than most poached eggs which tend to be runny and insipid.  The beans grown at Rose Trujillo’s farm are the real thing–prepared in the manner in which abuelitas have been preparing them for generations.

What surprised us most about our inaugural visit to La Tabla De Los Santos is that the menu not only appealed to my sense of tradition–something that’s to be expected in a New Mexican restaurant–but to Kim’s as well.  My lovely bride’s grandmother emigrated in the 1920s from Sweden to Chicago’s Andersonville district, but Kim has had little opportunity to enjoy traditional Swedish food in New Mexico’s restaurants.  Kim fondly remembers her sainted grandmother preparing pancakes with lingonberry butter for breakfast so it was a pleasant surprise to seem them on the mostly New Mexican menu at La Tabla.

Inger’s Swedish Pancakes are three thinly rolled pancakes with lingonberry butter.  Lingonberries, a very popular berry throughout much of northern Europe are sweet, but with a sharp, tangy edge similar to cranberries to which they are closely related.  Blended into whipped butter, they are perfect for slathering on the waifishly thin pancakes which are sprinkled with confectioner’s sugar.  You don’t want much syrup on these delicious orbs because its cloying qualities might obfuscate the wonderful flavor of the berries.  This entree is served with two slices of that bacon only restaurants seem able to acquire and with fresh fruit.

Interestingly the breakfast menu’s most expensive entree is named for a rather obscure saint only a devout theologian would know.  San Pula’s Plato de Carne, comprised of one rolled cheese enchilada with red or green chile, two farm eggs, calabasitas and a six-ounce ribeye steak, is a breakfast entree in which Chef Garcia is well practiced having prepared it under a different name at his now defunct eponymous restaurant Cafe San Estevan.  The steak is so good you’ll wish it was six or more ounces larger.  Ask for it with salt, pepper and garlic on both sides and instead of the humdrum garlic salt other restaurants use, the steak is adorned with minced garlic that accentuates the flavor of the steak.

Calabasitas are most definitely a traditional New Mexican dish, best when served with chicos.  La Tabla’s rendition is authentic–sliced zucchini squash, white onions and those chicos whose authenticity is in dispute with me.  The cheese enchilada covered in green chile is delicious, the wonderful fruitiness of the green chile just resonating with personality and flavor.  At about medium on the piquancy scale, the chile is about as good as you’ll find in Santa Fe.

Dessert isn’t always associated with breakfast, but at La Tabla it’s standard fare.  The “must have” is a Chef Garcia standard, organic goat milk flan, a dessert that happened by serendipity when he needed milk for flan and all he had was goat’s milk from Sweetwood’s Creamery.  The menu calls it “truly divine.”  Who can argue with divinity?  It’s my favorite flan in town.

La Tabla De Los Santos returns the highly skilled Chef Estevan Garcia to the kitchen where it seems San Pasqual provides divine inspiration.  His return to the kitchen means return visits on my part to a restaurant sure to draw in discerning diners craving New Mexican food that’s just about as good as it can be made.