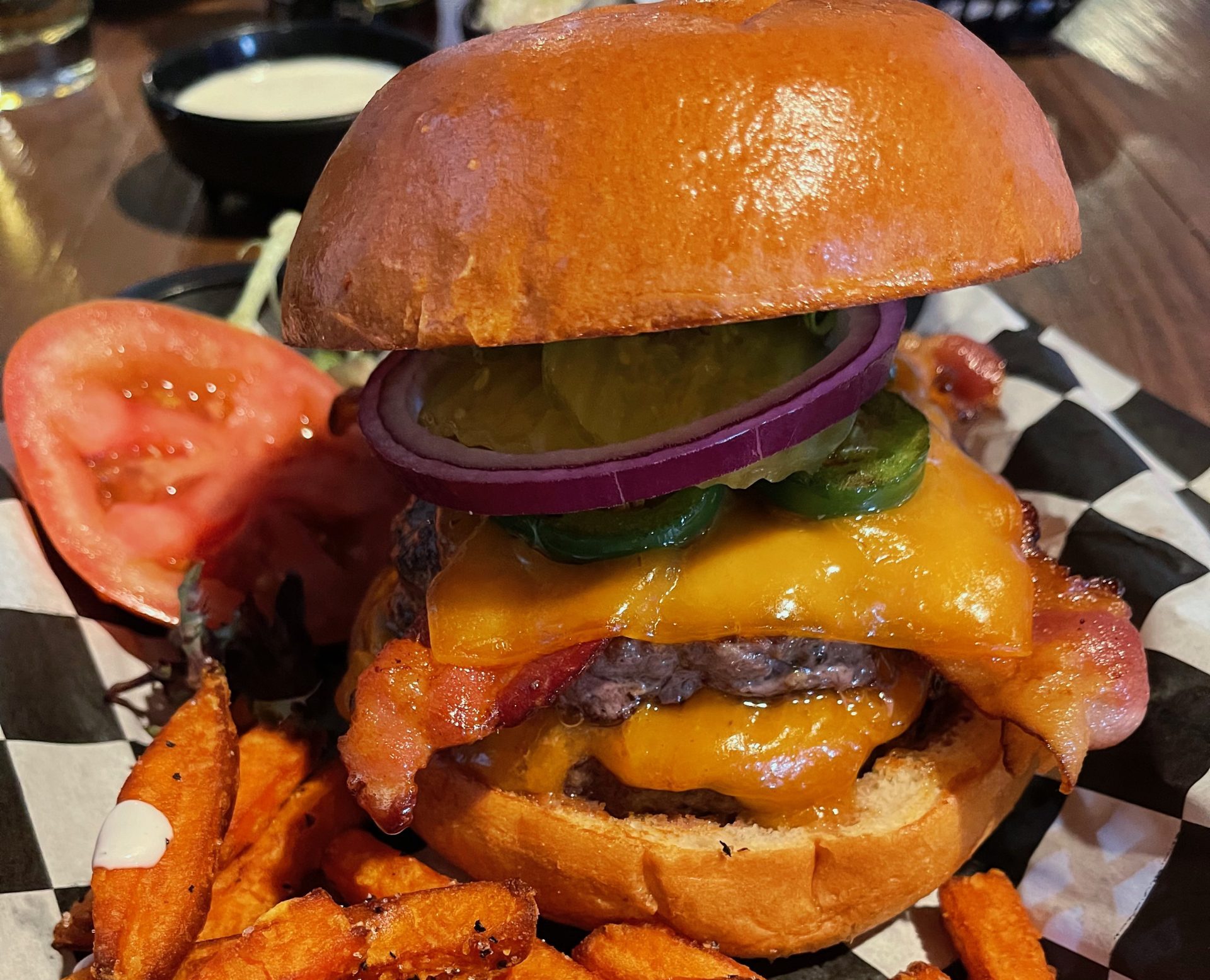 Before reading any further, the biggest take-away from this review is that the Local Brewhouse serves the best burger in Rio Rancho.  That’s not only what the marquee says.  It’s what City of Vision diners know.  My Kim and I, too.

“Service is horrible”  “The management has to train there employees.”  “Worst service ever! I can’t stress on how bad the service was.”  “Nice views. Lousy service and rude staff.”  “Service sucks. Waited 20mins between beers.”   Those are one-star reviews on Yelp for The Local Brewhouse in Rio Rancho.  At the extreme opposite are five star reviews extolling the service some Yelp reviewers found unacceptable: “Shout out to Rhiannon, our server for friendly, prompt, and efficient service.”  “Had a big gathering and they could not have been more accommodating! Super friendly.”  “The service is the best in the state.”  “5 stars all the way. Great service. Great food. Great beer.”

For better or worse, many of us–90% according to Infographics read online reviews before visiting a business and 88% of us trust  those online reviews.  Our quandary as consumers is learning to filter the outliers–the reviewers who accord one-star ratings on Yelp and TripAdvisor for the very same things other reviewers accord five-star ratings.  That’s the way it is with crowd-sourced reviews. It can be frustrating and it can be entertaining.  Ultimately, the only way to find out for sure is to take the plunge yourself.  That’s what we did when we visited The Local Brewhouse.  An hour and a half later we wished we had taken the plunge sooner.

The Local Brewhouse has the distinction of being the northwestern-most bar in the metropolitan area.  It also boasts of the largest patio in the City of Vision, one with spectacular sunset views of the Sandias.   More than a lot of restaurants, it seems to have the greatest disparity of reviewers who love it and those who don’t.  From among the 112 reviews (as of the date of this writing) on Yelp, a whopping 36 reviews give the Local Brewhouse five stars and 27 nay-sayers say it warrants one-star.  That means more than half (56.25%) of its reviews are either five stars or one star.

What struck me most in perusing reviews on Yelp and TripAdvisor was not the polar extreme ratings or the entertaining comments of the misanthropes who didn’t like The Local Brewhouse, but just how many reviewers sang the praises of the burgers:  “Shout out to the kitchen for one of the best burgers eaten in a while.”  “Their biker burger is the BEST.”  “The burgers are also amazing.”  “I’ve had their burgers before & was very impressed.”  “The burger was excellent.”  There are other similar comments about the burgers but you get the point.

As a bona fide burgerphile, the number of reviews for The Local Brewhouse touting the burgers perked up my taste buds.  Studying the menu with rapt interest practically had me salivating.  There are only five burgers on the menu, but they showcase “six-ounce hand-pattied burgers cooked to your liking on a toasted brioche with lettuce, tomato, onion and pickles with your choice of side.”  We sat on the table closest to the large window to the kitchen where we watched an assiduous staff fill orders with a quiet efficiency that belies the stereotype of the noisy kitchen.

25 June 2021: As we perused the menu, we asked our server to recommend an appetizer, most of which are somewhat anachronistic: fried pickles, fried mushrooms, fried zucchini, mozzarella sticks, onion rings and so forth.  Though we hadn’t ordered some of those since their halcyon days in the 70s, we took our server’s advice and ordered the fried zucchini.  It was an excellent choice.  Somehow the cooks managed to prepare fried zucchini that looked like fish planks.  They were thick and long with a light breading.  Best of all, they weren’t mushy at all like we remembered 70s fried zucchini to be.  This fried zucchini was crisp while being fried all the way through.  That in itself is a minor miracle.  Moreover, each zucchini plank was delicious with a ranch dressing that really complemented them well.  Fried zucchini–who’d have known?

Our “maybe we really have something here” feeling persisted when my Kim’s Blue Burger (blue cheese crumbles, crispy applewood smoked bacon and avocado) was delivered to our table.  Condiments (lettuce, tomato, onion, pickle) are served on the side instead of under the bun.  This is a tactic great burger restaurants employ to ensure buns don’t get soggy–and it allows you to use as much or as little of the condiments as you’d like.  Mustard and ketchup are positioned on each table as are napkins (and you’re going to need a few of them).

25 June 2021: It’s extremely rare for my Kim to ever order a burger much less finish one.  When she does finish one, especially a burger the size of this behemoth, you know it’s got to be good.  The Blue Burger was magnificent–large enough for a bull of a man, but good enough for a delicate flower of a woman.  Though I often lament “there’s not enough blue cheese” on this burger, the Blue Burger had just enough of the fetid fromage to appease this turophile.  A rasher or two of the applewood smoked bacon would have made us happier, but that wasn’t to be.  The hand-formed patty was prepared to my Kim’s exacting specifications (medium) and had that five-napkin juiciness we love.

25 June 2021: Our experiences with brew pubs, bars and gastropubs serving burgers haven’t always been memorable.  We’ll both remember Steve’s Burger (applewood smoked bacon, local green chile, melted pepper jack cheese) for a long time.  It’s The Local Brewhouse’s version of a green chile cheeseburger and it’s a New Mexico Green Chile Cheeseburger Trail worthy one.  The green chile has just enough piquancy to grab my attention and it’s got plenty of roasted green chile flavor, too.  That’s the first thing New Mexicans notice about green chile cheeseburgers.  Then we notice how well the beef is seasoned and prepared.  The Local Brewhouse aced the beef…and the cheese, too.  Just look at that molten blanket of pepper jack in the photo below.

Alas, the fries are unworthy to share space in the basket in which the burger is delivered.  They’re strictly out-of-a-bag that neither copious amounts of salt nor rivers of ketchup can do much for.  Instead of the run-of-the-mill fries, order the sweet potato fries.  You won’t get a small mountain of sweet potato fries as you do when you order the standard fries, but you won’t need ketchup or any other amelioration.  The sweet potato fries are crispy outside, tender inside, with a delicate, natural sweetness.  These truly belong with Steve’s burger.

8 April 2022: Both printed and online culinary sites would have you believe fried mushrooms are a throwback to the 1970s, a remnant of a past decade along with fondue, crepes Suzette, Hamburger Helper and Jell-O Salad.  It might surprise you to learn fried mushrooms are indeed an anachronism, but not from the 1970s.  A recipe for fried mushrooms was first published in a book  titled “English Housewifery” by Elizabeth Moxon.  That cookbook was published not in the 70s, but in the 60s–1764, to be exact.

It certainly does seem fried mushrooms were, if not the most popular, one of the most popular appetizers of the 1970s.  You can still find fried mushrooms–mostly at bars and pubs, some of which have been around since the 1970s.   Memories of meals bygone evoke powerful imagery that makes us want to relive them.  When we reminisce about fried mushrooms, we’ll think of the Local Brewhouse where these flavorful fungi are prepared the way we love them.  The Local Brewhouse lightly batters large portobello mushrooms to a golden hue.  Bite into them and you’re rewarded with the sharp earthiness and moistness of one of the best reasons to relive the 70s.  They’re served with ranch dressing; a green chile ranch would be oh, so much better.

8 April 2022:  While endeavoring to read the menu without my reading glasses (yes, even 39-year-olds use them), I espied a green chile Philly prepared on a “trashed” hoagie.  Our server laughingly corrected me in that the hoagie is “toasted” not “trashed.”  Though “really good,” she encouraged me to try the Biker Burger (double meat patty, applewood smoked bacon, Cheddar cheese and grilled jalapeños) with fries.  Ever the opportunist, I made it a point to tell her (nicely) that the fries were “trashed.”  Ever a loyal employee, she disagreed but urged me to try the sweet potato fries…which turned out to be quite good.  The burger was exceptional!  It’s rare for me to prefer jalapeños over green chile on a burger, but for the Biker Burger I’ll make an exception.  They’re not grilled to the extent I prefer, but those jalapeños were a nice foil for all that Cheddar draped beef.

Some of you might remember The Local Brewhouse’s short run in Albuquerque’s Paradise Square Shopping Center on Montgomery.  Owner Steve Pitt relocated his concept to Rio Rancho in February, 2016 at the former site of The Damn Bar.  He’s brought back the concept of “local hang-out” to the City of Vision, offering “elevated bar food” and beer on tap from local breweries.  Televisions tuned to sporting events are strategically placed throughout the restaurant.  Savvy diners and imbibers, however, prefer those intoxicating east-facing views of the Sandias.

While reading crowd-sourced reviews is always a good idea, take the nay-saying outliers with a grain of salt.  Sometimes they’re as reliable as a politician’s campaign promise.  Instead, study the favorable reviews from ordinary people who tend not to be as persnickety.  You just might discover a terrific hang-out such as The Local Brewhouse.