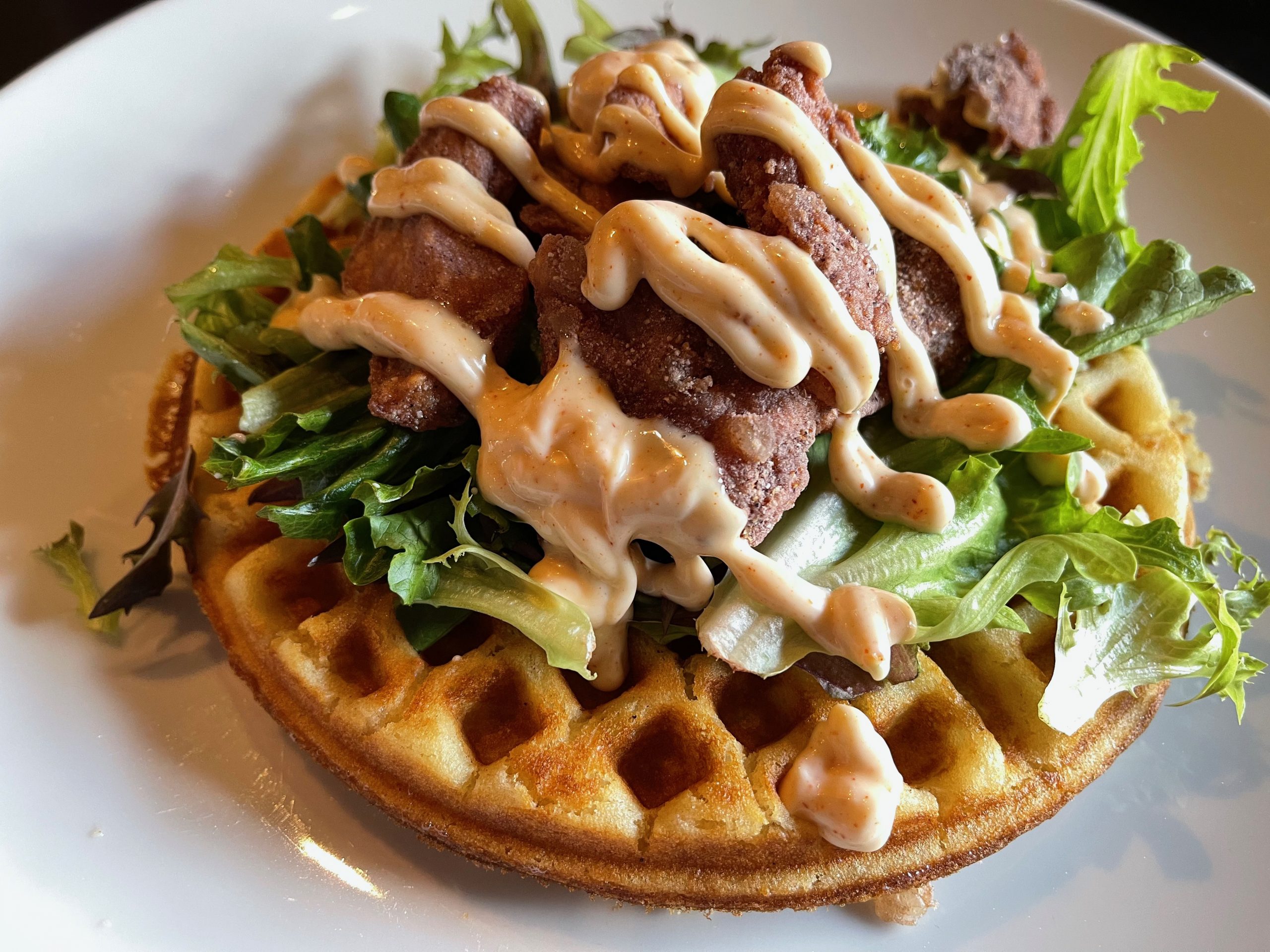 FROM WAFFOLOGY’S FACEBOOK PAGE: We regret to announce our final closing. We fought hard and we appreciate all of you who came alongside us. February 5th will be our last day serving from 9am-6pm.

In an article for New Mexico Magazine, scintillating four-time James Beard award-winning author Cheryl Alters Jamison proclaimed “Pity the folks who think breakfast is a bowl of cornflakes or some granola and yogurt—talk about starting the day with a yawn! I’m here to tell you that the best, most bodacious wake-up food, bar none, is New Mexico’s breakfast burrito. It doesn’t just break the fast, it blasts it.”  Cheryl may not have called out other American breakfast staples.  She didn’t need to.

When my friend Bruce “Sr. Plata” Silver (who grew up in Los Angeles but has lived in New Mexico almost half his life) invited me to join him for breakfast at Waffology in beautiful downtown Corrales, we discussed the challenges of breaking the New Mexico breakfast paradigm.  Most New Mexicans enjoy an occasional breakfast of crepes, pancakes, French toast and waffles, but given our druthers we prefer breakfast burritos by just about the same margin with which George Washington won the country’s inaugural Presidential election.

So, just how does a new eatery compete in a breakfast market in which the odds appear so overwhelmingly stacked against it?  The obvious quick answer, of course, is “just add red and green chile.”  That’s what virtually every type of restaurant save for Vietnamese seems to do.  A better answer is “serve delicious, high quality food at reasonable prices that give you a great reason for getting up early in the morning.”  That’s what Waffology has done.  And if you’re wondering what could probably make waffles more exciting, just take a look at the menu (called “The Syllabus”) and its menu categories employing academic terms and you just might be rush over to Corrales.

That inventive syllabus features waffles self-actualized, waffles as good as they can possibly be.  Don’t spend too much time contemplating the academic-themed syllabus titles: Teacher’s Pet, Favorite Subjects, Bad Influence and Detention/Extra Credit.  Focus on the items listed and the ingredients with which they’re creatively put together.  You’ll see waffles constructed with red and green chile, but you’ll also find waffles paired with Cajun and Mexican ingredients.  You’ll find waffle combinations that include fruit, eggs, carne asada and even alligator.  There are non-waffle items, too.

Perusing the syllabus had me wondering if Sr. Plata had an ulterior motive.  The first item on the “Favorite Subjects” section of the syllabus is called Waffle De Plata.  Yes, it’s named for my good friend who’s one-upped me again.  The only thing ever named for me was a mangy cow–courtesy of my friend Estevan López (who would go on to serve as Commissioner of the Bureau of Reclamation under the Obama administration).  Sr. Plata assured me that it’s not vanity that he orders the Waffle De Plata every time he visits Waffology.

Indeed, the Waffle De Plata (pickled onion, beef rib meat) is quite good with its palate-pleasing convergence of flavors–the elegantly composed, perfectly circular pastry with a deep-grid pattern; a light drizzle of sweet syrup; a tangle of sweet, tangy, aromatic pickled onions; and a generous topping of beef rib meat with a flavor reminiscent of a good steak.  Like New Mexico’s sacrosanct breakfast burrito this waffle (in Cheryl’s words) doesn’t just break the fast, it blasts it.  What will surprise you most about this waffle is the delicious balance of sweet and savory flavors, both flavor profiles working in harmony.  Lightly pulling the beef rib meat through the syrup is the true definition of meat candy.

On the “Favorite Subjects” section of the syllabus you’ll espy an entree titled The Swamp Waffle (fried or blackened alligator, mixed greens, Cajun aioli).  While the name itself may not be particular appetizing, don’t let labels dissuade you from ordering what may be one of the most delicious surprises you’ll wake up to.  Having enjoyed freshly caught, deep-fried alligator many times during our eight years on the Mississippi Gulf Coast, I was surprised at how fresh and enjoyable Waffology’s rendition is.  As with other items on the menu, the swamp waffle introduces a melding of flavor profiles that work well together.  Most surprisingly was the complementary contrast between the syrup sweetened waffle and the garlicky, personality-rich Cajun aioli.

Much as he loves the waffle named for him, Sr. Plata readily admits his favorite American breakfast (none of which were actually invented within the fruited plain) items in order of preference are crepes, pancakes, French toast then waffles.  Because there are no crepes on the syllabus, he gravitates toward the “Bad Influence” section where he finds The Rebel (short stack of sweet cream or gluten-free pancakes).  If you like your pancakes moist, the sweet cream pancakes are awash with both flavor and moistness even though just lightly drizzled with syrup.  Though the syllabus describes them as a “short stack,” these three glistening golden orbs cover most of the plate.

Waffology is one of a triumvirate of concepts (the other two are C3’s Bistro and P’Tit Louis) under the auspices of Generous Hospitality Group.  All share space under the same roof.  Waffology is open Tuesday through Saturday from 7AM to 2PM after which C3’s Bistro takes over except for Wednesday evenings when French (the way it was long prepared by P’Tit Louis before its closure) is featured fare.  Three concepts under one roof are sure to please even the most pedantic palates.

It’s unlikely the breakfast burrito will ever be supplanted as New Mexico’s favorite breakfast item, but if it is, it might just be waffles that takes the reins and Waffology will be right there.