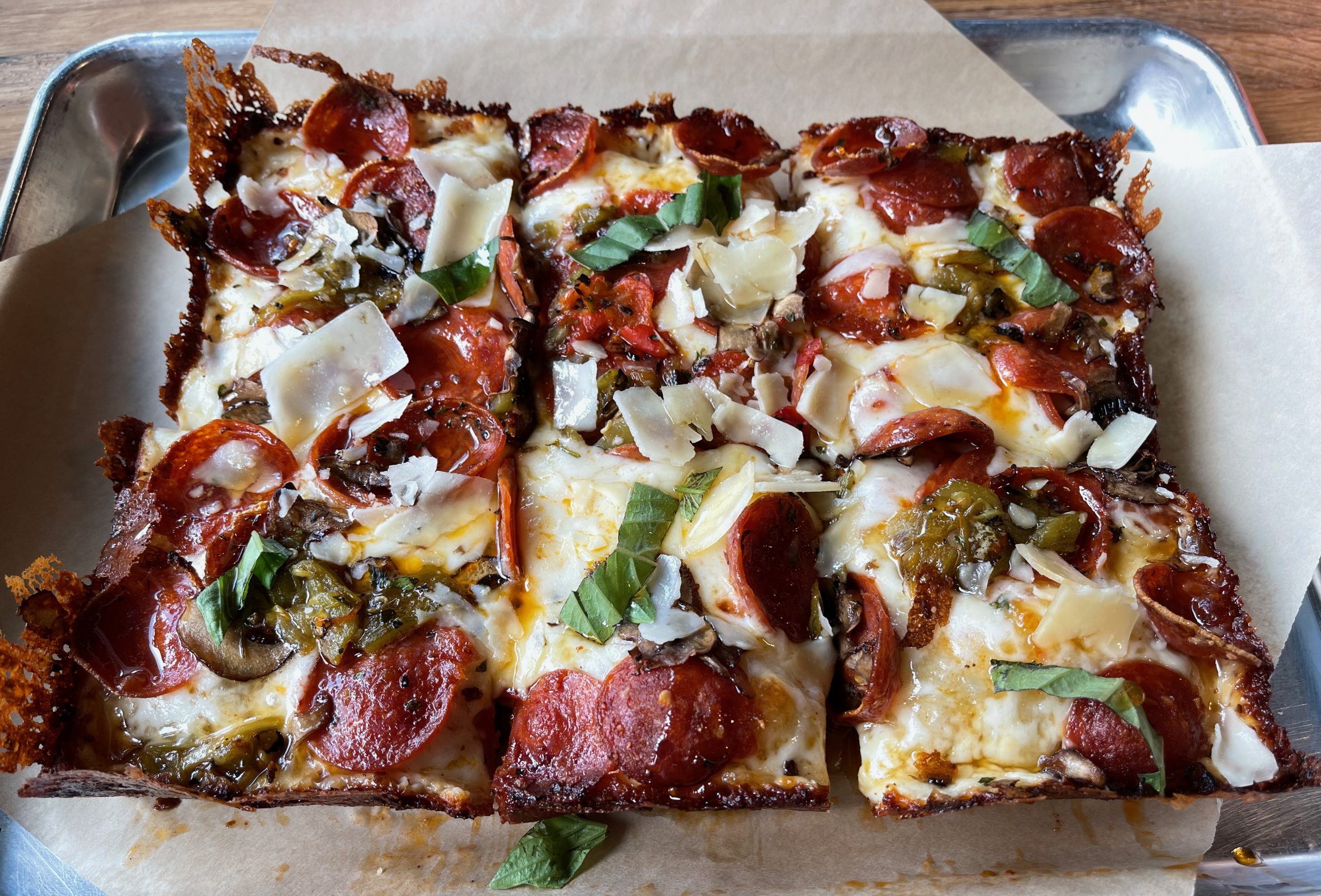 As you’ve read on the tagline for Gil’s Thrilling (And Filling) Blog, your humble blogger fancies himself somewhat of a sesquipedalian (a person who tends to use big words).  My logophilia (the love of vocabulary) is a lifelong affliction, both in English and in Spanish.  Despite my “affair” with words, one word-related term which just doesn’t describe me is neologist (someone who uses new words). This is especially true about slang terms in fashion among the pop-culture-oriented youth.  When it comes to such terms, I’m not far removed from groovy, bread and copacetic.  It’s certainly not that I’m not interested in such words.  It’s just that I don’t seem to know anyone young and cool enough to use such terms (sorry BOTVOLR).

Upon espying the name “Thicc Pizza Co.,” my initial inclination was “why would anyone spell “thick” so incorrectly.”  It then dawned on me that “thicc” could be one of those neologisms (a newly coined word or expression) no one in my inner circle seems to use.  A little research on the Sydney Morning Herald confirmed my suspicions: “Appearing in hip-hop circles during the early 2000s, the term “thicc” (originally “thick”) developed in African-American culture as a synonym for voluptuous and full-figured, gorgeous women. But the meaning has since transformed, with Urban Dictionary recently defining it as when “a person has fat in the right places, creating sexy curves”.

A pizza with curves in the right places?  I’m jiggy  with that (and if I used that term incorrectly it confirms just how uncool I am.)   My initial thought in reading about thick pizza isn’t Pizza Hut’s “thick and chewy” pizza of yore, but Chicago-style pizza, the pizza former “Daily Show,” host Jon Stewart  called everything from a “fricking casserole” to “an above-ground marinara swimming pool for rats.”  Thicc Pizza isn’t Chicago-style though it does emanate from another Midwest metropolis.  Other than Motown music, Detroit-style pizza may be the best thing to ever come from the Motor City.

Detroit-style pizza is traditionally prepared in square blue steel pans originally used to hold nuts and bolts in the factories so prevalent in the Motor City’s industrial heritage.  Those pans are well oiled before the dough–about three-quarters to an inch thick–is added. Detroit-style pizza has a “Frico” (burnt cheese) crust. This results in a thick, chewy and airy crust with caramelized, well-done edges and a crispy bottom. There is some char, but most of us believe char is a flavor anyway. Because the crust is so crispy, it won’t get soggy. Here’s betting you’ll eat every bit of that crust.

Thicc Pizza Co. is the brainchild of Seth Beckley and Felicia Meyer, who also own Hawt Pizza Co. at the Sawmill Market, New Mexico’s first artisan food hall.  (You might also remember Felicia as having owned Fierenze Pizzeria a few years ago.)  While thin is in at Hawt, fat is where it’s at…at Thicc where you’re invited to find out why it’s really hip to be square.   Seth and Felicia also invite you to learn a few things about Thicc before you visit.

Don’t worry.  It’s not scientific stuff about the thermodynamics of square pizza (yawn).  It’s fun facts that speak volumes about Thicc’s dynamic owners.  You might not agree with all those facts, but you’ll get a kick out of them. Here’s just a smattering: We DO NOT put anchovies on our pizzas, they are an abomination. We’re a non GMO kitchen. We will never feed you any cheap or crappy ingredients. People who do not believe pineapple belongs on pizza are not to be trusted.

As with all the eateries at the 505 Central Food Hall, Thicc Pizza Co. operates out of a Lilliputian lair (with a 300-square-food kitchen).   Thicc’s slow-rise dough is made in-house daily and is rolled and stretched by human hands.  Only one size (eight-inch by ten inch) pizza is available and it’s cut into six squares and served in a steel pan.  Thicc’s motto is “Made for two, Sometimes devoured by one!”  There’s plenty of seating inside the comfortably cooled complex as well as in the spacious patio fronting Route 66.

There are a dozen custom pizzas on the menu–some with red sauce, some with white sauce.   For a pittance you can add “two stripes of steaming hot red sauce” which red (chile) blooded New Mexicans should enjoy.   You can also top your pizza with such “drizzles” as Mike’s hot honey, truffle oil, house Balsamic glaze, house Buffalo sauce and extra virgin olive oil.  “Next Level Extras” include ricotta kisses, truffle ricotta and burrata torn six ways.  All pies are finished with Thicc’s signature shaved Parmesan cheese.

17 July 2021: Only 1940s pulp hero The Shadow knew what evil lurked in the hearts of man, but I’ll bet not even he could tell you why your humble blogger’s inaugural Thicc pizza was The G.O.A.T (Thicc cheese blend, Boar’s Head Serrano chorizo, caramelized onion, Boar’s Head crispy bacon, goat cheese crumbles, Mike’s Hot Honey, arugula).  My decision was made on the strength of two ingredients–the goat cheese crumbles and Mike’s Hot Honey, a pairing of savory and sweet heretofore unknown by my pedantic palate.

Had I been able to predict how fantastically the melange of superb ingredients complemented one another, I would have asked for another drizzle of that hot honey (a true ambrosia) to accentuate and counterbalance the savory components.    Of all the pizza we’ve enjoyed in 2021, only Chef Mario D’Elia’s New York-style pizza at Poppy’s Pizzeria & Italian Eatery is on par with The G.O.A.T., which just might live up to the “Greatest Of All Time” acronym.  If you’ve never had Detroit-style pizza (and that abomination from Little Caesar’s doesn’t count), you’ll fall in love with this one.

31 July 2021:  For decades some denizens of the Duke City have embraced the demonym Burqueño (and its feminine equivalent Burqueña).  One definition defines the term as “a native of Albuquerque, and the Albuquerque Metropolitan Area extended throughout Central New Mexico, traditionally one born hearing the urban type New Mexico English; the dialect or accent typical of such a person.”  Perhaps best exemplifying the Burqueña genesis, dialect and accent is local celebrity Lauren “Lynette” Poole.  If you’ve ever seen her in a television commercial or watched her youtube videos, you’ll probably agree.

Just like Lynette, Thicc’s Burqueño (Thicc cheese blend, organic red sauce, Ezzo pepperoni, mushroom, green chile, basil) is saucy, spicy and feisty.  It’s also quite delicious and accomplishes what a lot of thick pizzas don’t…or maybe can’t do.  That’s showcase a red sauce with a thick consistency and savory, oregano-rich flavor.  It doesn’t get lost somewhere between the cheese blend and the thick crust.  I swear sometimes it’s as if pizza sauce completely “evaporates” from thick pizza.  Fittingly the green chile has personality a plenty as well.  The Ezzo pepperoni has some of the same “cup and char” qualities of the pepperoni used on Buffalo-style pizza which means it’s the best.  This is indeed one of the best pizzas we’ve had in New Mexico.

31 July 2021: During our inaugural visit to Thicc, my Kim was feeling a bit under the weather and didn’t find my G.O.A.T. pizza nearly as remarkable as I did.  It took a little convincing to convince her to give Thicc a second chance.  That’s all it took.  She fell in love with the aptly named Yo Adrian (Thicc cheese blend, garlic crema, thin sliced ribeye, mushrooms, green chile, EVOO, arugula, side of yellow hots).  Okay, she asked that the green chile and side of yellow hots to be omitted, but there was still plenty of Adrian in there.  She especially loved the garlic crema and its personal relationship with the cheese blend.  Honestly, you could probably pull tendrils of that cheese two feet into the air and still have plenty left.  It’s a generous, creamy, rich blend every pizza should be blessed with.

J. Kenji Lopez, a culinary consultant for Serious Eats, described Detroit-style pizza as “not everyday pizza. It’s not every-week pizza. It might not even be every-month, if you want to live to a reasonable age. But damn, is it good pizza. So good that it’s worth a trip to Detroit just to taste it.”  Duke City diners need go no further than downtown’s 505 Central Food Hall to find Detroit-style pizza Motor City diners might make the trip to Albuquerque to taste.