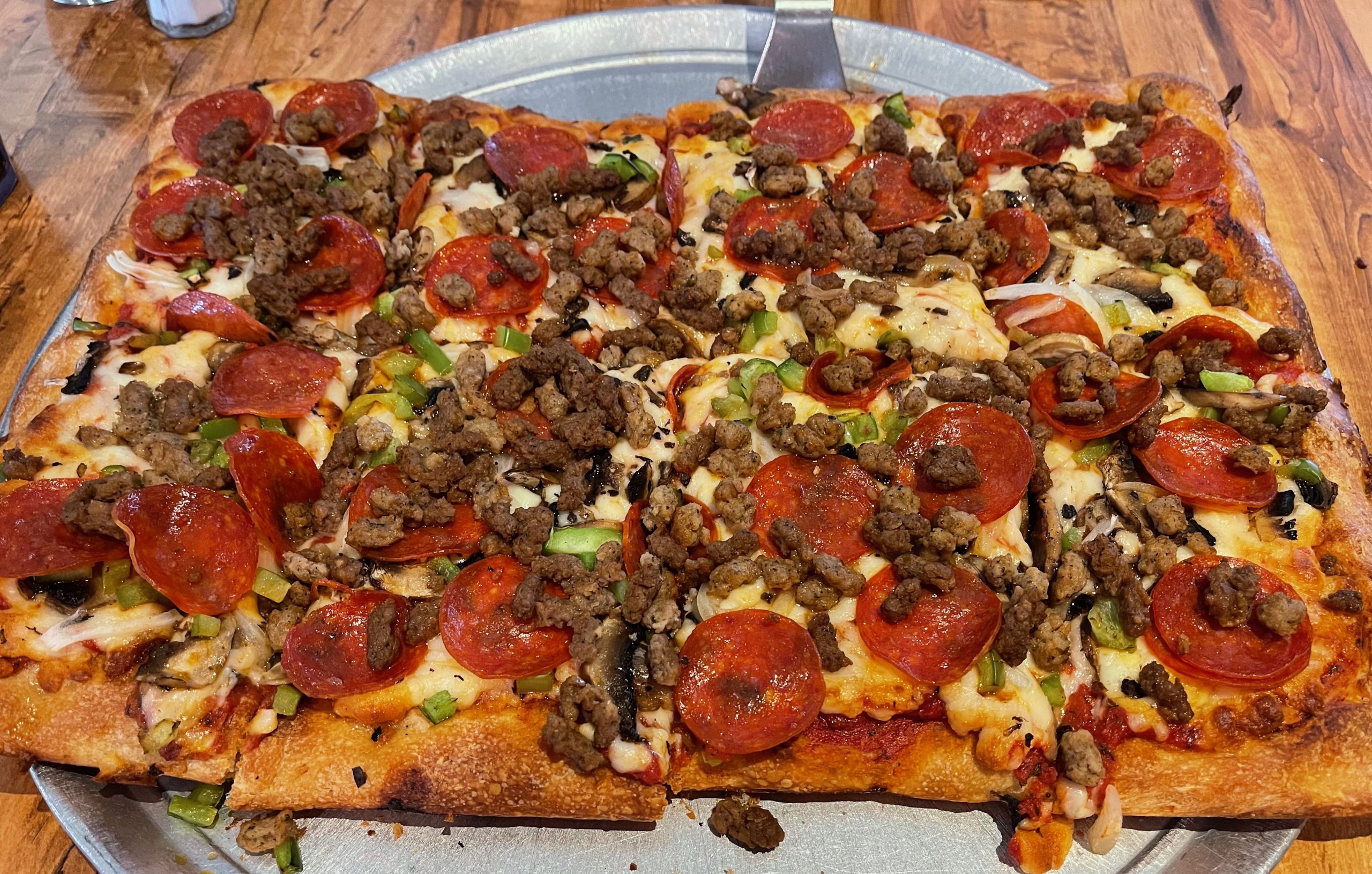 8 October 2021: We practically recited a prayer of invocation upon seeing Mixed Cold Cuts on the menu (in the restaurant’s previous instantiation, this starter was called Affetatti Misti).  Available in small (serves two) or large (serves four), these cold cuts include salami, prosciutto, ham, pepperoni, Provolone, Swiss, green and black olives and pickled artichokes.  Call it a poor person’s charcuterie if you will, but this is one very satisfying starter especially since your table will also have a loaf of the restaurant’s crusty Italian bread on hand.

8 October 2021: Both my Kim and I opted for soup as soon as our server informed us the del giorno (Italian for du jour) soup was tomato bisque.  By definition, a bisque is a French style of soup made from crustaceans, such as lobster, crab, shrimp, and crayfish.  No matter how you classify this elixir, you’ll call it soul-warming and delicious.  This bisque is smooth, creamy and nicely seasoned.  It’s a perfect change of season soup…er, bisque.

08 October 2021:Traditionally carbonara is made by combining hot cooked pasta  with raw eggs or egg yolks, grated Pecorino Romano, ground black pepper, and fried pancetta, guanciale, (or, sometimes in the U.S., bacon).  Rather than debate the authenticity of Sal’s carbonara offering, I’ll assess what we experienced–a largely delicious offering of spaghetti in a rich, creamy sauce with pancetta.  As with carbonara we’ve experienced in the United States, it was much too rich to finish in one sitting.  That’s a good thing as it tastes even better the next day.

08 October 2021: Both Italy and the United States claim to be the originator of the recipe for penna alla vodka, a tomato sauce-based dish enhanced with cream and vodka.  Essentially the sauce can be added to a variety of dishes including gnocchi, ravioli and spaghetti.  Sal’s version, a rigatoni alla vodka has an element we hadn’t previously experienced.  While alla vodka is generally made with hot oil, Sal’s version emphasizes the word “hot.”  In fact, we wondered if we hadn’t been mistakenly served rigatoni Amatriciana instead.  While the dish proved very satisfying to me, my Kim found it too piquant.

1 July 2022: To sauce or not to sauce.  That is the question.  My Kim is a sauce minimalist while her saucy husband would just as soon drench anything Italian with sauce, especially a sauce based on tomatoes (perhaps subconsciously it reminds me of the salsa which flows in my veins).  When our meatball, sausage and garlic bread appetizer arrived (sauce on the side at my Kim’s request), she plucked the meatball and sausage off the plate before I had a chance to toss it into the sauce.  As usual, I should have followed her lead.  One of the cooks was rather heavy-handed with the salt (perhaps someone loosened the top of the salt shaker).  My portion of the sausage and meatball (which I dumped directly into the sauce) were in dire need of desalinization.  The overuse of salt is at the top of my list of culinary transgressions.  Fortunately I’m a forgiving guy who’s convinced this was a one-time faux pas.

1 July 2022:  Who knows how many times I’ve misled my friend Captain Tuttle, one of the best and funniest people I know, about some restaurant I really liked only for him to find that same restaurant rather mediocre.  In my defense, he once told me his cousin Leandro’s rooster was a friendly and benign feathered fellow.  The welts and scars on my legs and butt proved otherwise (and I really should have gotten the hint when he scurried away in fear the second we approached that cruel rooster).  Anyway for a while now, he’s been telling me the pizza at Sal’s is his favorite Duke City pie.  There’s no doubt it would have been in contention for our favorite, too, had it not been for the aforementioned overuse of salt.  Even with the thickness of the thick Sicilian style crust, the extra salt had us pursing our lips.  To make matters worse, the pepperoni and sausage seemed to accentuate that saltiness.  Thank goodness for the green peppers, onions and mushrooms.  For years we enjoyed the Sicilian pizza at Mimmo’s and are convinced the salt overdose was a one-time thing.