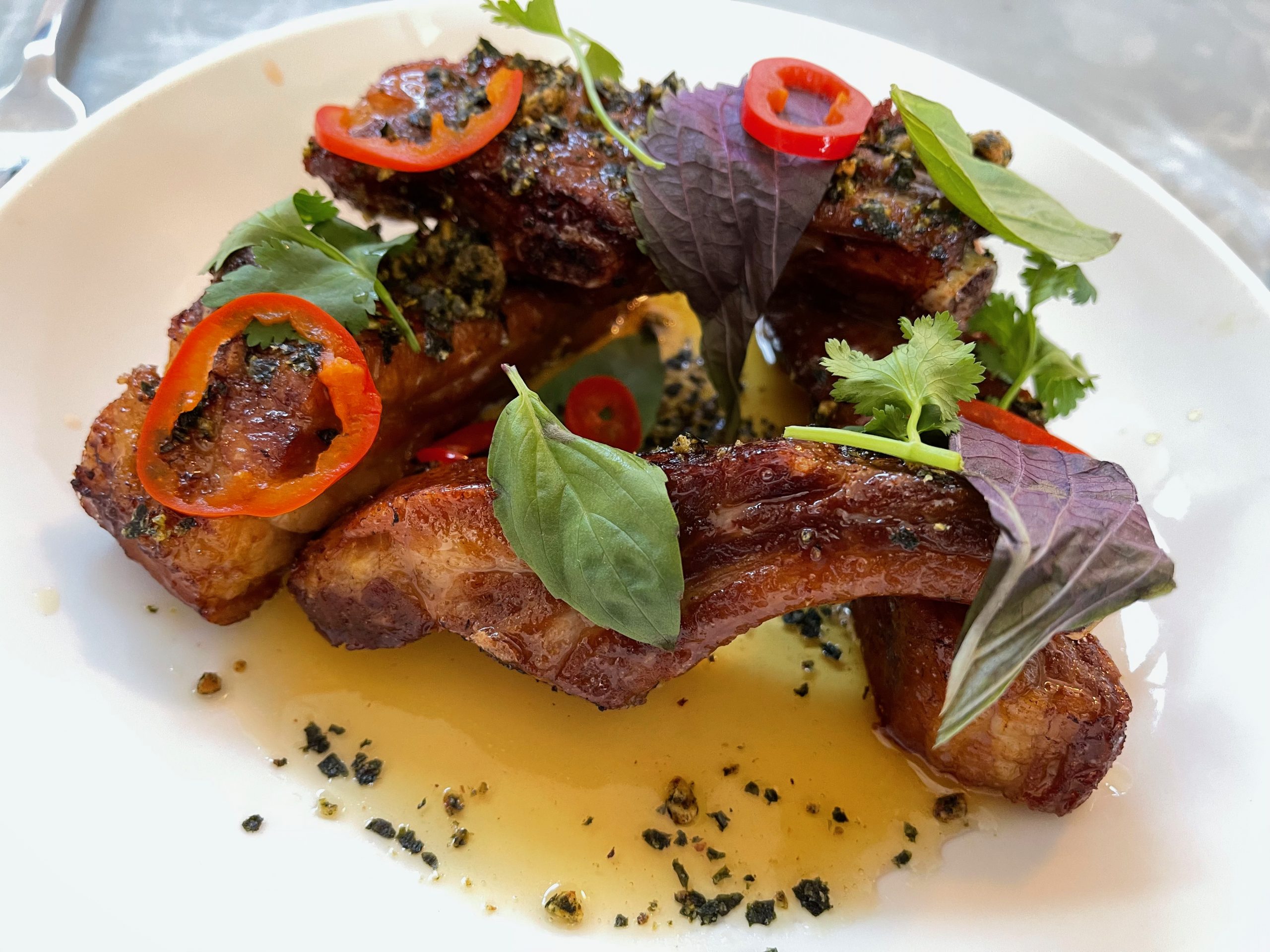 Here are a few tips if you’ve got  a trip planned to Japan and would like to practice terms to convey your enthusiasm for the delicious meals you’re sure to experience,    After your first bite, use the term “umai” to express how delicious that first bite was. As you continue to eat, use the term “oishii” frequently to convey with alacrity that the food you’re eating is fantastic.  Because it’s considered good manners in Japanese culture not only to finish every single morsel on your  plate but to ask for a second serving, the phrase “okawari” will come in handy.  And to make it even more polite, postface the term with “kudasai” which means “please.”

On the last Sunday of October when our planned lunch excursion was to Kitsune, a Japanese term for “fox,” I had hoped to be able to display this gaijin’s (foreigner’s) mastery of Japanese culinary terms even if my butchered pronunciation might make those terms nearly unrecognizable.  Alas, that was not to be.  When I greeted our server with “konnichiwa” (Hi; good afternoon) he looked at me as if I was speaking Roswellian alien.   Having heard Iron Chef Morimoto utter that phrase numerous times, I knew my pronunciation was correct.

In all fairness, Kitsune isn’t so much a Japanese eatery as it is an Asian-inspired slash fusion restaurant with a menu showcasing elements of Korean, Thai, Japanese, Hawaiian, China, Southeast Asia and even New Mexican cuisines.  It’s not a sweeping menu, listing fewer than twenty items in three categories: Shareables, Rice Dishes and Sides.  That’s just a few items more than Kitsune offered when it was a successful and highly popular food truck.

In July, 2021, Kitsune launched a brick-and-mortar restaurant near the Romero Street entrance to Albuquerque’s Old Town.  Kitsune sits in a very familiar location–the former home of the controversial Candy Lady where it shares space with the Taproom at Old Town.  Prefacing the restaurant’s entrance is a small patio from where you can watch tourists and locals alike vie for a parking spot.  There’s a larger patio in back of the rather austere, almost minimalist dining room.

Not long after Kitsune’s brick-and-mortar launch it received a three-and-a-half star rating from the Albuquerque Journal.  Shortly thereafter Kristin Satterlee also waxed eloquent about Kitsune on her fabulous blog Unfussy Epicure.  Though we never managed to visit Kitsune in its food truck instantiation, the two reviews clearly told us we had missed a pretty special dining experience.  It didn’t take long before the designation “special” was validated in our eyes.

As we perused the menu, we enjoyed Gosling Ginger Beer, a “barely” alcoholic beverage with which we fell in love during our week in Salt Lake City in August, 2021.  Alternatively, we could have had something more “adult” from the mixed drinks side of the laminated menu, but it was the other side in which we were interested.  That’s where the very compelling food menu lives.  Like we did, you’ll probably deliberate for a good long while before deciding what to order.  It all sounds so good.

There are two French fry mash-ups on the Shareables menu.  One is Thai inspired, the other Korean.    We opted for the Bo-Samm Fries (pulled pork, gochujang, Kitsune sauce, queso fresco, pickled onions, cilantro) which are named in honor of a Korean slow-cooked pork roast dish.  A lavish portion of South Carolina-worthy pulled pork was replete with the bark we love even more than the Ivory Snow white pork meat.  The fries were thin-cut and crispy.  Crumbled white cheese (perhaps a Mexican variety) was strewn throughout, providing a nice foil for the tangy pickled onions.  Two sauces were drizzled onto the concoction.  More prominent was the gochujang, Korea’s answer to Sriracha.  With its telltale ginger red color, fiery personality and subtle sweet notes, the gochujang pairs well with the Kitsune sauce, a less spicy aioli.  Adventurous French fry fanatics will flip over this magnificent mash-up.

Though on the Shareables menu, my Kim wanted the Ribs & Furikake (baby back ribs glazed in a pho spiced caramel and topped with peanut and chicharron furikake and fresh herbs) dish as her entree.  If you’ve ever had Vietnamese caramel-based dishes, you’ll recognize caramel sauces are one of the cornerstones of Vietnamese cuisine, a glaze which not only imbues savory foods with a beautifully amber color, but with addictive sweet notes.  That sauce isn’t quite lacquered on the ribs, but provides just enough sweetness to balance the porcine savoriness of the baby backs.  The peanut and chicharron furikake (a Japanese condiment sprinkled on foods) adds even more personality to a dish with multiple personalities all coalescing deliciously.

Washington Post columnist Gene Weingarten once fiercely and very wrongly derided Indian curries, declaring they “taste like something that could knock a vulture off a meat wagon.” He then doubled down on his ignorance by stating that “Indian food is “based entirely on one spice.”  Sadly that prejudice is rather widespread.  For me, curry was one of those rare “love at first aroma” dishes.  Whether it’s Indian curry or a curry dish from Thailand, Laos, Japan, Vietnam or any other enlightened nation, I’m the bizzaro Gene Weingarten who’s never met a curry I didn’t love.

It doesn’t often surprise me to discover the melding of somewhat similar and very complimentary ingredients, but Kitsune’s red chile curry rice bowl (Hatch red chile curry, pulled pork, slow egg, cilantro and lime) blew me away.  There’s genius in this dish–sagacity in contriving of a Hatch red chile-based curry, erudition in pairing that curry with a generous portion of pulled pork and sheer brilliance in adding a slow egg to the mix.  Each of these components would work well alone, but combining them all is flair, artistry and….genius.

Even Hawaii is represented on Kitsune’s menu.  That’s in the form of musubi (sweet and salty glazed Spam on a layer of fluffy white rice wrapped with a roasted nori sheet), the Aloha State’s answer to sushi.      It may seem everyone knows about Hawaii’s affection for Spam, but many people haven’t even heard of musubi, another expression of the versatility of a delicious food that is somehow more often thought of as unwanted email.

You don’t have to be a bona fide “kuishinbo,” (the Japanese term for a person who loves to eat) to enjoy a fantastic experience at Kitsune.  Set your expectations high and prepare for surprises.  Kitsune will exceed your expectations and delight you with eye-opening deliciousness.