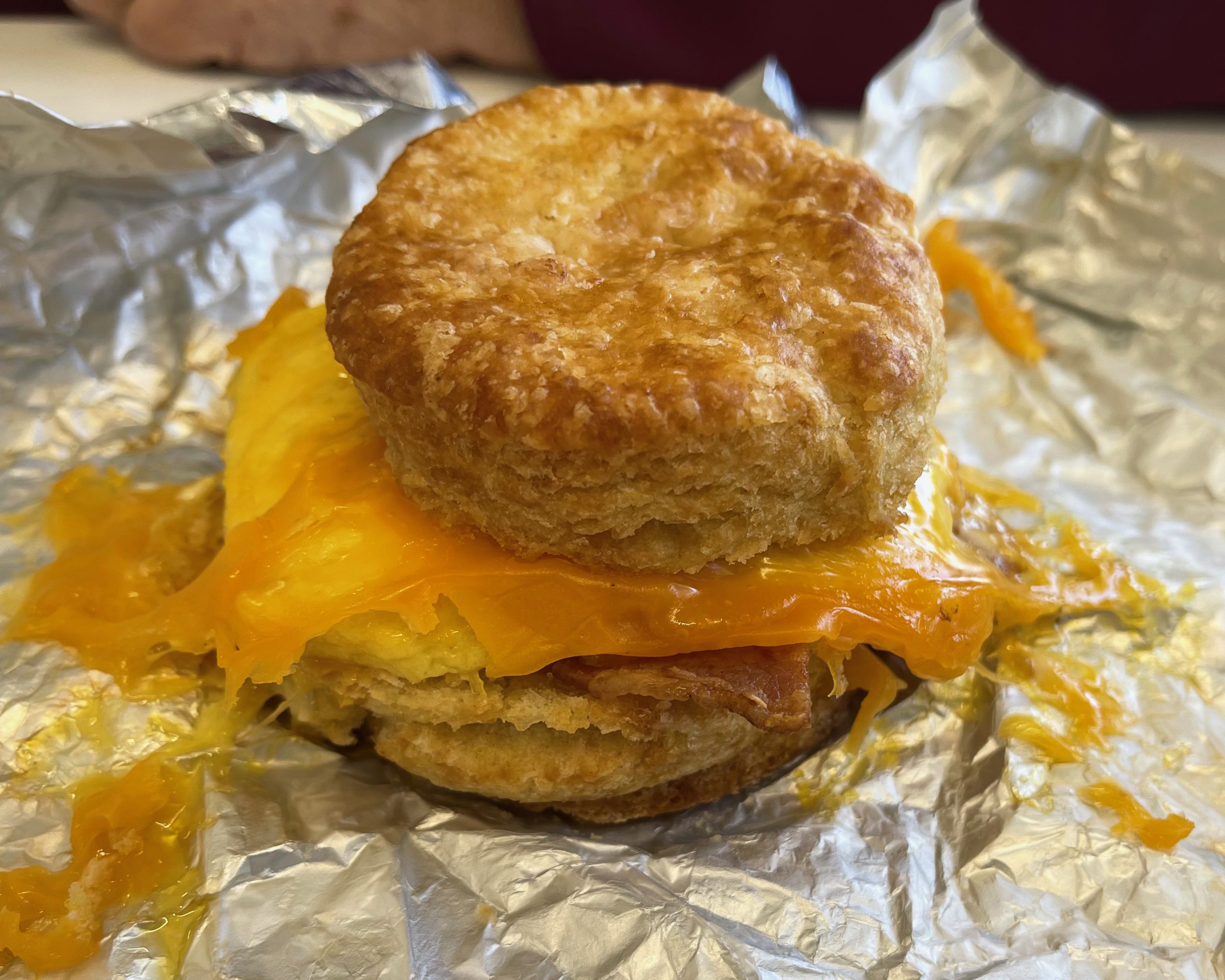 In Boris Pasternak’s Dr Zhivago, a sagacious old Russian czarist caught up in the communist revolution lamented “Scratch a Russian and you will find a peasant.”  To paraphrase that immortal line “Scratch a cook and you’ll find a chemist.”  Think I’ve been ingesting pharmaceuticals?  Maybe you should ask Deonte “Dee” Halsey, the affable owner of Biscuit Boy about the influence of chemistry in cooking.  He would know!  Dee was actually a research scientist working for the U.S. Department of Architecture before figuring out teaching science actually pays more than doing science.

Dee has been teaching science and math for more than two decades now, imparting knowledge and wisdom to high school, middle school and elementary school students.  For the past two years or so, he’s also been spending weekends hawking some of the very best biscuits you’ll find in the Land of Enchantment.  On Saturday you can find him at La Esquinita, a center for cultural flourishment in the Barelas neighborhood.   A mixed-use development combining housing, food, arts and retail, La Esquinita is yet another reason to visit Barelas.  On Sundays “in season” he plies his sideline at the Rail Yards Market in Albuquerque.

Though he grew up in Los Angeles, Dee has been around Southern cuisine for most of his life.  His childhood home was about a block away from Roscoe’s House of Chicken and Waffles  an exemplar of biscuit baking.  After high school, Dee got his Bachelors degree from Middle Tennessee State in Nashville.  In between obtaining a Masters degree from Loyola University in Maryland, Dee taught math and science in Atlanta, Temple Hills (Maryland) and Houston before joining the Albuquerque school system in August, 2016.  To say he became acquainted with some of the best purveyors of Southern cuisine is an understatement.

Like most of us who lived and ate in the Deep South, Dee is familiar with the long-established contention that the real reason Southern biscuits are superior is soft wheat flour, specifically White Lily self-rising bleached flour.  Chemistry, the knowledge of ingredients in exacting proportions, is why Dee believes great biscuits can be made with New Mexico-only ingredients.  Well, that and the Maillard Reaction which creates flavor and changes the color of food through a chemical reaction involving heat, sugar and an amino acid.  It’s all very scientific, but as we found out Dee can reduce all that chemistry into understandable terms.

Dee is understandably very proud of his biscuits, made almost exclusively with New Mexico ingredients.  He obtains corn and wheat flour from the Navajo Reservation in the Four Corners and has the flour milled at the Valencia Flour Mill in Jarales.  He sources his chile from a farmer in the South Valley.  Ingredients aside, Dee knows what he’s doing and has very high standards for biscuits.  He wants them fluffy and light not dense and solid.  By the way, chemistry can explain why some biscuits are crumbly and others hold their integrity (and have no flavor).

Biscuit Boy is named for Dee’s son who’s very fond of biscuits.  You won’t soon find Biscuit Boy in a stand-alone brick and mortar until Dee retires from teaching several years from now.  Proffering biscuits on weekends keeps him busy enough.  For his Saturday gig at La Esquinita, he prepares some sixty biscuit sandwiches and individual biscuits for butter and jam.  Early shift patrons snap up most of those sixty biscuits.  Get there after eleven and pickings will be slim, albeit still quite delicious.

The name “Biscuit Boy,” by the way describes the entirety of the menu.  Biscuits are the only thing available–no sides or appetizers.  If you want something to drink (and if you order the Nashville Hot, you might soon be begging for water), you’re only a few feet away from Novel Point Coffee where we surrendered to an addictive pecan cocoa.  Scrawled on a white board the day of our inaugural visit was a menu listing just five items, four of which were still available when we got to La Esquinita just after 11AM.

To be considered a “Southern Belle,” a young lady must first be presented into society either through a debutante ball or cotillion.  Biscuit Boy has another way–fried chicken, fried apples and Cheddar cheese nestled in a fluffy buttermilk biscuit.  As James Beard award-winning author Jason Sheehan (formerly of The Alibi) says “I don’t know what it is about fried chicken that makes it so special, but I know that it is.  Maybe it’s that it’s monolithic — its definition contained entirely within its name.”  Biscuit Boy’s fried chicken is special–a crispy coating sheathing moist, tender, perfect poultry.   If you’ve ever had apple pie with Cheddar, you can understand just how well fried apples and Cheddar complement fried chicken.  Expect to be wowed by this Southern Belle!

Not everyone across the country is fortunate enough to wake up to the sacrosanct breakfast burritos which are ubiquitous throughout the Land of Enchantment.  In the great South, you’re infinitely more likely to have a biscuit sandwich usually one stuffed with egg, cheese and bacon.  Dee calls his version the B.E.C.  You’ll call it absolutely delicious.  First of all, the biscuit rises to your expectations.  It’s fluffy, flaky and delicious, the perfect repository for egg, cheese and bacon.

Back in 2016, a number of restaurant publications predicted a big biscuit trend across the fruited plain.   Expectations were that biscuit concept restaurants would be all the rage.  Sadly, that trend never really manifested.  Sure, a few joints offered breakfast biscuit sandwiches, but that’s about it.  An explosion of Nashville hot chicken restaurants was similarly predicted.  As with biscuit themed restaurants, there just aren’t that many of them.  Dee’s Nashville Hot melds the two concepts magnificently.  Unlike the traditional Nashville hot chicken which relies primarily on cayenne for its heat, Dee also incorporates New Mexico red chile into his chicken.  That red chile makes a difference.  It tempers the piquancy of the cayenne while imparting sweet notes of flavor that make this a transcendent sandwich.

Biscuit Boy isn’t a laboratory in which beakers of bubbling chemicals spill over, but a pretty brilliant scientist uses chemistry to concoct some of the best biscuits you’ll find in the Land of Enchantment.