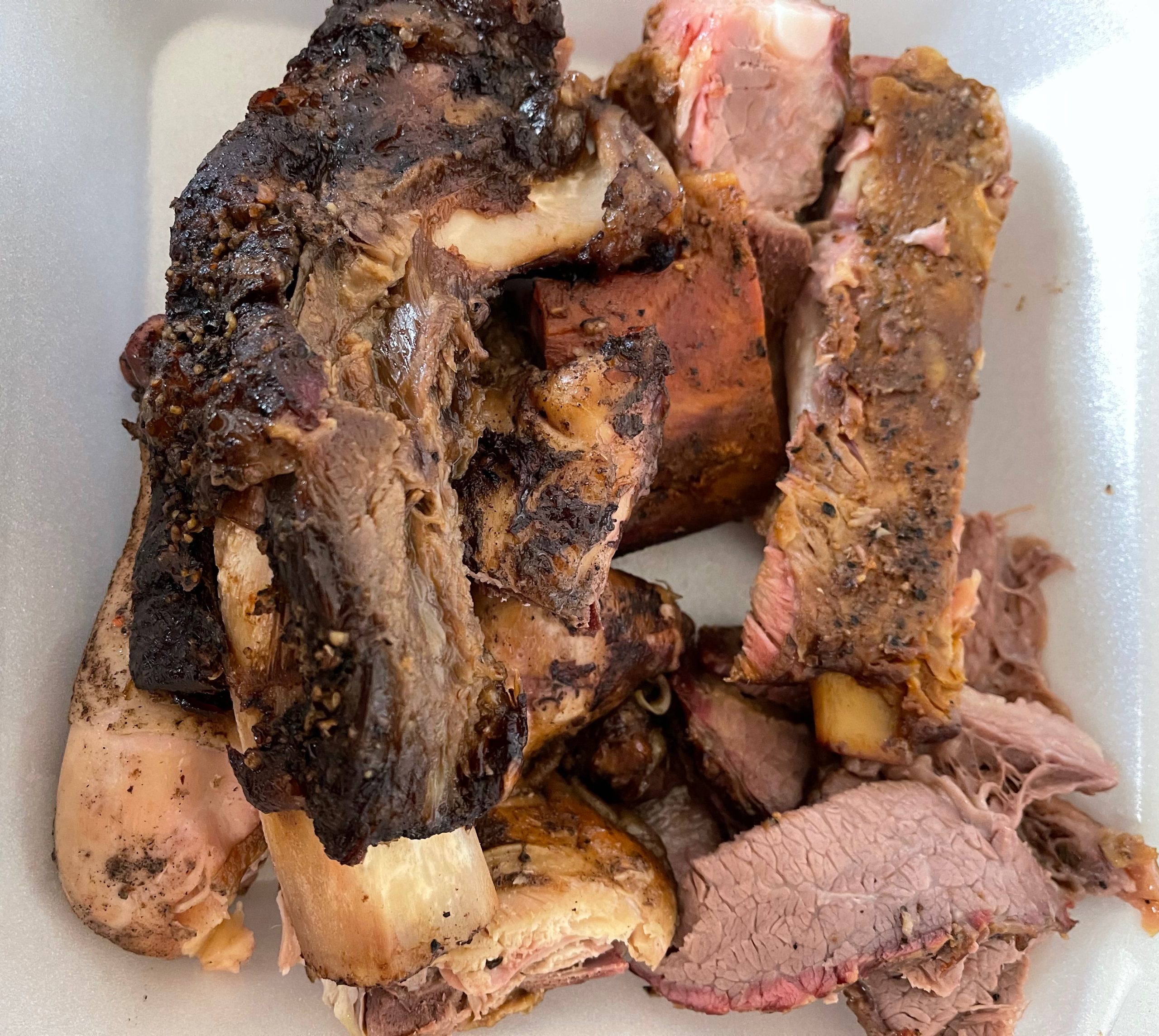 “Barbecue may be our nation’s most democratic food.
(Think small d-democratic, as in of the people, by the people, for the people.)
That’s part of the problem:
Egalitarian foods with elemental appeal oftentimes get short shrift.”
~John T. Edge for Gourmet Magazine

When we first heard about a restaurant in Albuquerque’s South Valley offering “Texas style barbecue in the Land of Enchantment,” three questions came to mind.  First, of course, was “could this really be Texas style barbecue?”  “Texas is like a whole other country” in which there is no one style of barbecue.  Instead, barbecue varies from one region to another across the Lone Star State.  Pundits who refer to “Texas style barbecue” are usually talking about Central Texas barbecue hailing from the hill country region around Austin.  My second question was “why would an Albuquerque restaurant call itself “Black Mesa.”  New Mexico’s most famous Black Mesa is the sacred mountain within the confines of the San Ildelfonso Pueblo just north of Española.  It’s about 80 miles from the Duke City.

My third question and maybe the easiest to answer was “why would someone open a barbecue restaurant here.”  “Here” is Coors Blvd. just about as far south as Coors meanders before you’re in Isleta Pueblo.  The answer, of course, is “why not.”  To paraphrase John T. Edge’s eloquent assertion “barbecue is of the people, by the people and for the people.”  There are a lot of people in this part of town, albeit not living in homes that abut with their neighbor’s homes.  There’s room to breathe out here.  Why shouldn’t rural Albuquerque have barbecue, too?

Long before Black Mesa BBQ came into being,  a very popular New Mexican restaurant occupied the venerable space for a long time.  A raging conflagration consumed much of that restaurant which then sat vacant for years.   Enter Asif Sharfi (yeah, that name probably begs a few other questions) who purchased the gutted space and began an extensive make-over to breathe space back into what was once a successful eatery.  His initial restaurant venture was a New Mexican restaurant which met with mixed results.  His second effort, Black Mesa BBQ, is establishing quite a following, especially among denizens of Albuquerque’s most agrarian area.

Asif explained that the restaurant is named for the black lava escarpment on Albuquerque’s west mesa, particularly around Unser Blvd.  A very genial and guest-oriented host, Asif is understandably very proud of his restaurant.  He might be especially proud of the $16-thousand Ole’ Hickory Pits wood-burning smoker he purchased.   He stokes its flames only with mesquite and oak as many Texas restaurants and competition barbecue teams do, taking great care to control temperatures.   Meats that go into that smoker stay there for as long as eighteen hours, truly subscribing to the “low and slow” edict of accomplished pit masters everywhere.

Black Mesa’s menu is replete with surprises.  Not only is it the only brick and mortal restaurant in the Duke City area offering beef ribs (at upwards of $30 a pound, it’s easy to see why), the menu also boasts a variety unseen in these parts.  That includes tandoori chicken, jerk chicken, turkey legs, meats (sliced brisket, pulled pork, ribs) by the pound, sandwiches and a bevy of sides.  You’ve undoubtedly experienced restaurants featuring two and three meat samplers, but Black Mesa has them all beaten with its four and five meat samplers.  If you’re really hungry, there’s also a family meal that serves eight to ten people.

Pull up to the restaurant and you’ll espy a sign beckoning you to try “Seafood Boil Fridays.”  This favorite of beach-going seafood aficionados everywhere includes crab, shrimp, sausage, corn and potatoes.  The kicker is that you’ve got to order it at least a day in advance.  Despite being a rather commodious restaurant, we were the only “eat-in” diners during our inaugural visit.  A steady stream of take-out orders were quickly filled.  On our way in, we spoke with several patrons from the neighborhood.  All lavished praise on this family restaurant “filling a real need in the south South Valley.”

Though the menu is replete with so many tempting options, the best way to get a feel for the barbecue is with a five meat sampler (two pork ribs, one beef rib, jerk chicken, pulled pork and brisket).  This barbecue may well be “Texas style barbecue in the Land of Enchantment,” but it’s not quite Central Texas barbecue…or should I say “not all Central Texas barbecue.”  Nothing says Central Texas barbecue like brisket, the Lone Star state’s favorite smoked meat.  Throughout Texas, brisket is reliably excellent.  The brisket at Black Mesa is quite good, probably our favorite among the five.  A pinkish smoke ring, one of the most sought-after properties in smoked meats, bespeaks of the loving care taken with this meat.

The beef rib was also quite good, albeit not nearly of the Flintstonian dimensions of the beef ribs at Black’s BBQ in Lockhart, Texas.  Still, it’s a blessing just to have beef ribs in New Mexico.  The jerk chicken is tender and smoky but not nearly as piquant as jerk chicken enlivened with scotch bonnet peppers.  Pork ribs and pulled pork are more closely associated with barbecue regions other than Texas, but don’t ever tell a Texan they can’t smoke pork as well as anyone else.  That said, Black Mesa’s pulled pork was quite unique.  It seems almost stewed and is served in what may have been its own juices.

To sauce or not to sauce.  That is the question.  Purists will argue that barbecue sauce is a crutch for inferior smoked meats.  Others argue that a good barbecue sauce transcends great smoked meats because it goes on anything.  Black Mesa offers a mild sauce and a hot sauce, but better than either of these is a plum sauce Asif had just prepared.  If you’ve ever had plum sauce at most Chinese restaurants, you probably agree that its a cloying, tooth-decaying mess.  Asif’s version is better than any plum sauce we’ve had in Albuquerque.

Yet another barbecue standard in Texas is cornbread.  Black Mesa offers two varieties–one invigorated by jalapenos.  The other might be a fairly run-of-the-mill cornbread were it not made with coconut milk.  The only other time we enjoyed coconut milk in cornbread was in Nashville, not anywhere in Texas.  Notes of fresh coconut made their presence known on our taste buds as well they should.  Coconut milk is made from shredded coconut first immersed in water then being squeezed out.  It’s a surprisingly delicious addition to cornbread.

Black Mesa’s menu also includes a dessert-of-the-day.  Asif must have known we were visiting because the dessert on the Friday of our inaugural visit was pecan pie.  There’s usually only one complaint paramours of pecan pie ever have–a slice is never big enough.  Such was the case with this pecan pie even though it wasn’t warmed up nor was it served with a dollop of ice cream.  Okay, okay, there are three complaints about pecan pie.

If you’re tired of Albuquerque’s urban pavement jungle, but don’t want to drive too far, Black Mesa is one of those rare restaurants that make you feel you’ve gotten away from it all without being too far away.