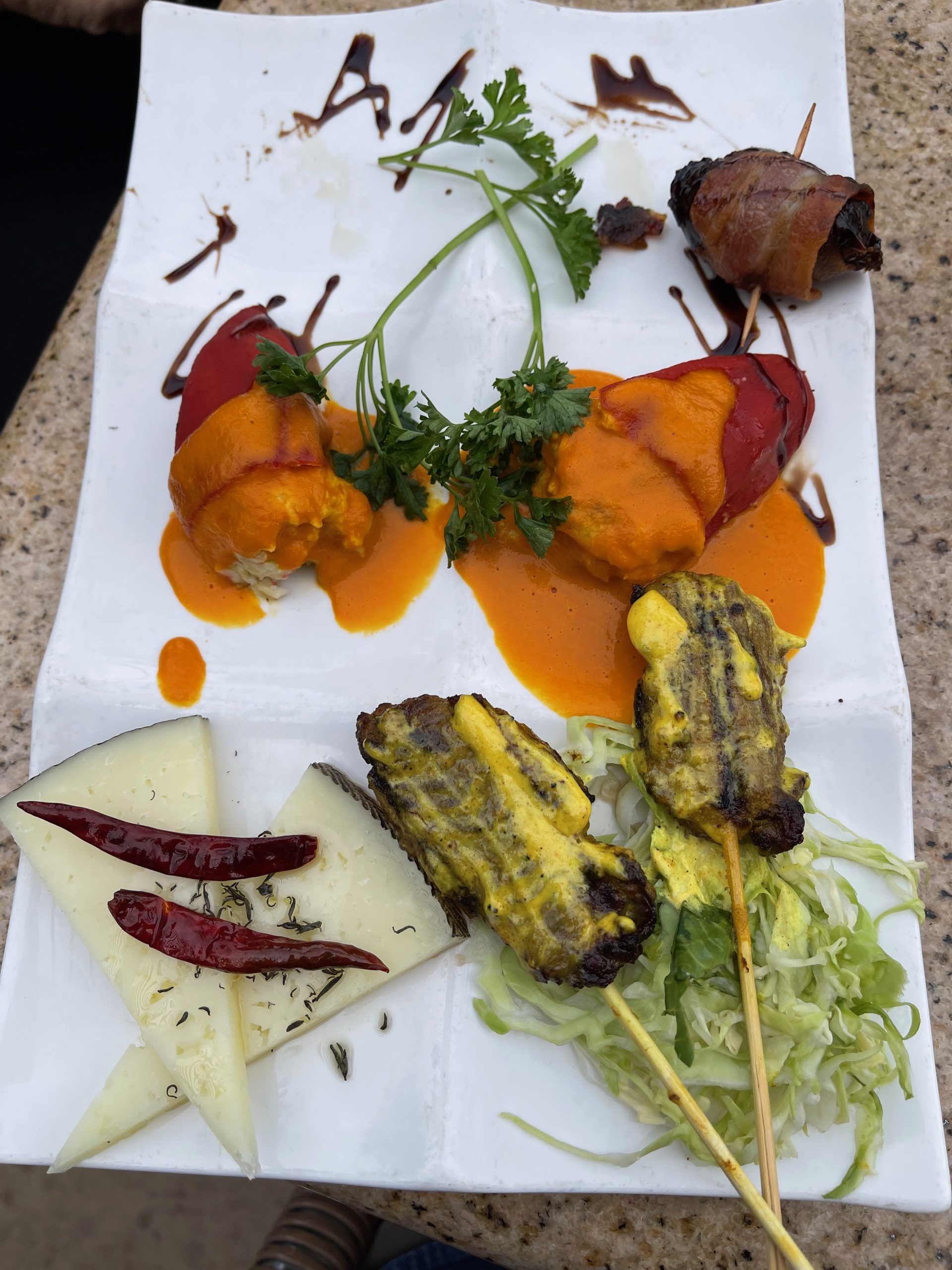 While dining at a restaurant in Phoenix, our stomachs roiled a bit as a pesky fly took a nosedive into my glass of Mexican Coca Cola.  By the time our server returned, the acid in the Coke had completely dissolved the fly.  There was no evidence remaining that a fly had drowned in the carbonated water.  If anything, that little escapade gave credence to one of two stories that explain the origin of Spanish tapas.  In this particular origin story, the genesis of tapas was in the working class taverns of Andalusia where field workers used slices of bread and meat to keep dust and insects out of their sherry glasses.  That story made me wish I had placed a piece of bread to keep that one fly away from my drink.

There are similar origin stories, most involving covering beer or sherry with a saucer to keep flies out.  Bartenders eventually figured they could use the saucer to serve a little ham, some cheese and olives.  This clever move proved very popular among customers who appreciated the bar’s apparent generosity.  In one version of this origin story, devious innkeepers figured out they could serve cheap wine with a plate of strong cheese.  In short order, drunken patrons wouldn’t notice how bad the wine was.

The commonality among the many tapas origin stories is some kind of covering is a “cover” or “lid” (tapa in Spanish) to keep flies away from adult beverages.  Apparently during medieval times, protecting beer or wine from annoying flies was more important than keeping them away from meats, cheeses or olives.  Perhaps flies were seen as just a little more protein for small snacks.  In any case, when you’re enjoying any libation in an area where flies are present, you’re well advised to cover your glass.  Just don’t cover it with any food you’re planning to eat.

In modern Spain, tapas have come to mean much more than a way to protect your beverage. More than a gastronomic custom, they have  become a social or communal event.  Taverns are clustered in close proximity to one another, making it easy for patrons to hop from bar to bar sampling the specialty of the house at each.  The practice of chasing after those diverse and delicious little dishes known as “tapas” is called a “tapeo” and no city does tapas bar-hopping as well as Madrid. In Madrid tapeos have achieved near cult status. They are a cultural event, a rite of passage and a sporting event rolled into one. A tapeo allows you to sample the culinary fare at several tapas bars without sitting down for an entire meal. Ostensibly, you “walk off” your tapas and wine as you hop from bar to bar.

In America, tapas have become popular as a meal option–eating a number of appetizer-sized plates to constitute an entire meal.  As in Spain, American tapas restaurants and bars attract groups who, by sharing dishes, can sample a wide variety of foods for a relative pittance. Sharing small plate dishes does not a tapas culture make. As Anthony Bourdain once quipped “You may think you know what a tapa is. Like if you’ve had small bites at some fusion hipster bar where they do a whole lot of little plates. Yeah, that ain’t a tapa.” In Spain, tapas isn’t a formulaic approach in which a restaurant (or more likely, a drinking establishment) serves “small plates.” It’s so much more than that.

We’ve visited several “tapas” restaurants across the fruited plain and while most have served very good to outstanding small plates, we’ve never gone away thinking we’ve experienced a “tapas culture.”  For one thing, Spaniards generally eat lunch between 1 and 3 PM, and dinner is usually served between 9PM and 11PM. Because of the long gap in time between lunch and dinner, locals sate their hunger at tapas bars. When they go to a local bar and order a drink, it will often come with a free tapa.  Tapas time does not a tapas culture make.  For that you’ve got to mix in a convivial, festive atmosphere and strolling from bar to bar for more.  Tapas are not so much a type of food, but a way of social eating that encourages diners to order multiple plates and let the wine flow.

While the United States will not likely ever have a tapas culture like Spain does, restaurants such as Tapas Papa Frita in Scottsdale do their best to invoke the indomitable spirit of a tapas culture.  Overlooking the Scottsdale Waterfront, Tapas Papa Frito’s upscale ambiance is as spectacular as the hospitality is genuine.  The cynosure of the capacious dining room is a circular stone bar whose refulgent lighting and close proximity seating invite patrons to drink in leisure.  Spanish art adorns the dining room, each piece handpicked by the chef and owner Joseph Gutierrez, a native of Bilbao in Spain.

Tapas Papa Frita offers the largest selection of tapas we’ve seen at any tapas restaurant.  It also specializes in paella, the pride of Valencia.  Our server told us the tapas menu represents just about every region in Spain.  Indeed, the menu is diverse and varied, truly Spanish instead of “Spanish inspired” like so many tapas restaurants in North America tend to be.  Alas, not every tapa we ordered was as inspired as some of the magnificent small plate creations concocted by the brilliant Chef Marc Quiñones at Mas Tapas Y Vino in Downtown Albuquerque.

The menu is almost intimidating in its compendium-like structure.  Nearly fifty tapas–vegetable, vegetable with meat or fish, seafood and meat–grace the menu. Thankfully English translations follow the Spanish names of each.  Soups and salads are also available though likely an afterthought for diners seeking a tapas adventure.  There are seven paella dishes on the menu though most of us probably assumed there was only one way to prepare paella.  For those who eschew paella, entree plates feature seafood and meat dishes.

If you don’t want much guesswork in the ordering process, “Chef Joseph’s Taste of Spain” is a good bet: “six classic tapas with our masterpiece paella.”  At $54 per person, it’s also a good bargain considering each tapa is usually ten to fourteen dollars.  You can get off just a bit less expensive if only one of you orders the paella.  One order is more than enough for two people.  That’s not the case with the tapas.  Most tapas are three to four bites and though you can share, you might not want to share the tapas you’re sure to like.

Tapas are intended to be small plate dishes for one diner–just a few bites each. In Madrid if two diners plan to share a dish, they would order “raciones” (servings in English) or “media raciones” (larger than a tapa, but not as large a serving as a full racione).  At Tapas Papa Frita, the small plates you receive are most assuredly tapas.  While you await delivery of your meal, a basket of bread rolls and garlic aioli is ferried to your table.  There’s really nothing especially noteworthy about either, but you might want to save some of the bread for sopping up the sauces.

Four of our tapas were delivered on one large plate.  It’s a pretty as a picture presentation even though our server dropped one of the datiles con tocino (apple wrapped medjool dates stuffed with rosemary goat cheese).  Some variation of bacon wrapped dates stuffed with cheese appears to be a de rigueur offering at most tapas restaurants.  We’ve never had a forgettable rendition.  There’s just something about extreme contrasts–the high sugar content of the dates, the porcine salty umami of the bacon and the tangy sour notes from the rosemary goat cheese–that make this a personal favorite.

We were similar besotted of the solomillo moruno (grilled tenderloin of beef with adobo sauce).  At first glance, we wondered if this tapa wasn’t a Spanish take on Thai satay.  Other than being presented on a stick, there was no other semblance.  Adobo sauce seems to be a catch-all for savory sauces with just a bit of spice.   This one was rather benign with none of the characteristic paprika evident.  Still, the grilled tenderloin of beef was quite good.  It probably doesn’t need to be said that the queso manchego (thyme and olive oil marinated sheep cheese) was excellent.  It’s long been a favorite Spanish cheese.

We were rendered somewhat blasé about the piquillo con centollos (crab stuffed piquillo peppers in a saffron sauce).  Considering how much we both like crab, that was a bit of a surprise.  The crab had a mushy texture and appearance that went well with the sweet piquillo pepper.  If the piquillo con centollos failed to impress, the gambas al ajillo (gulf shrimp with garlic and wine sauce) were a smash hit.  The shrimp had a snap to them, a sign of freshness.   The garlic and wine sauce was our favorite of all the sauces.  We were grateful to have saved some bread.

As an avowed mycophile (devotee of mushrooms), I look forward to the sundry ways in which mushrooms can be prepared.  With their characteristic umami, the “essence of deliciousness,” mushrooms are among my very favorite fungi.  Sadly the championes al jerez (braised mushrooms with garlic and sherry) were perhaps the most disappointing of all our tapas.  Okay, the mushrooms were fine, but the garlic and sherry were flat out boring.  Rather than let the mushroom caps sing a solo, the sauce tried to drown out the mushrooms.

Tapas aside, what turned out to be the most magnificent surprise was the Valenciana Paella (a masterpiece of saffron rice with clams, mussels, shrimp, chicken, twixtorra sausage, peppers, onions, tomatoes and peas).  I’ve had paella from twenty or more restaurants in Europe and across the states and thought I knew what to expect.  It turns out paella isn’t supposed to taste like jambalaya, yet that’s how much of the paella I’ve had tasted.  The EatDown blog explains that paella and jambalaya are often confused despite different origins, ingredients, and cooking styles.

The blog further explains that “jambalaya and paella are two of the best one-pot or one-pan dishes out there. In both dishes, you stew meat or seafood in spices, seasoning, and rice broth. The similarities end here, as they each have unique characteristics that set them apart from one another.”  From an academic perspective, we knew of differences, but tasting Tapas Papa Frita’s paella brought it all to light.  This was paella the way in which it would be enjoyed in Spain–even onto the socarrat, the tasty layer of crispy, toasted rice at the bottom of the pan.  The ingredients were first-rate, particularly the twixtorra sausage which we’d welcome on a pizza.

No matter what dessert a restaurant may offer, the second my Kim sees a dish in which nutella is part and parcel, she’ll stop reading.  At Tapas Papa Frita, she stopped at Pastel De Avellana Americana (hazelnut nutella cheesecake).  With a mousse-like texture and generous drizzle of nutella ganache, it’s as decadent and rich a dessert as we’ve had.  A sliced strawberry provides a bit of a foil for the near-cloying qualities of the nutella.  So does the sprig of mint.

From an experiential perspective, Tapas Papa Frita is a winner especially if ambiance and service factor into your dining enjoyment (as well they should).