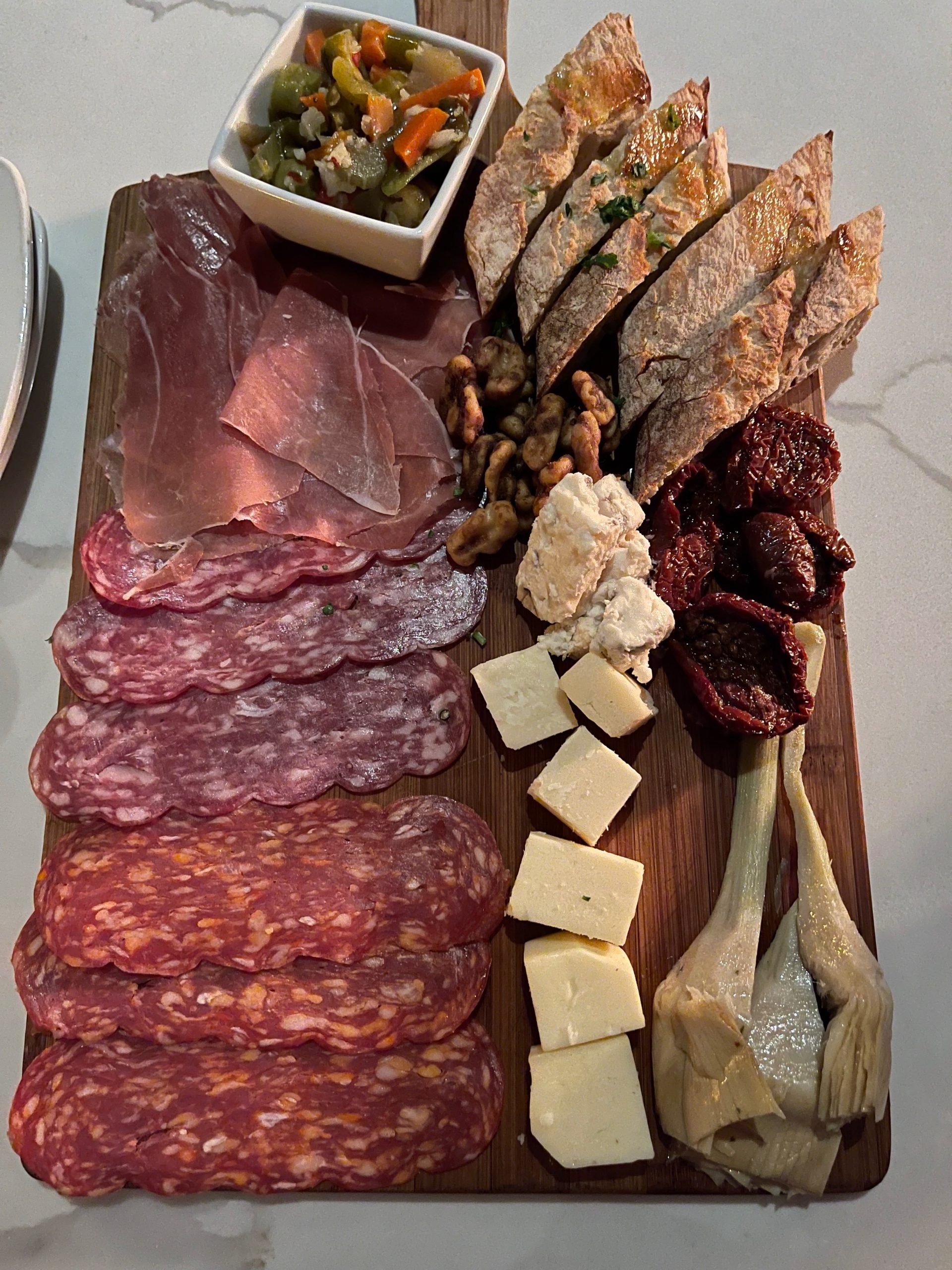 When you visit the Valley of the Sun, the very last thing you expect is a record-setting, all-day rain that keeps you indoors most of the day.    An all-day rain in December, however, is infinitely preferable to an all-day rain during monsoon season when the occasional deluge in 100-degree weather is exacerbated by humidity equalled only in a steam bath.  Staying indoors isn’t a bad thing.  It gave us the opportunity to study where we should enjoy dinner on Christmas Eve 2021.  My sister Anita, the only other gourmand in the family, had some recommendations which will have to wait for another day.  If drivers in Arizona are anything like drivers in New Mexico we didn’t want to drive as far as the restaurants she recommended.

By the time we decided to head out, we had whittled our list down to restaurants meeting three criterion.  It would have to be Dude-friendly.  Our debonair dachshund wanted to celebrate Christmas Eve, too.  It would have to serve great food; that goes without saying.  It wouldn’t require us to drive halfway across the state in the downpour.  We should have added a fourth criterion.  The restaurant must be open (how obvious is that?).  On Christmas Eve many of the restaurants on our list were either closed or closed early.

We’ve learned over the years that when a door is closed, a window is broken…or something to that effect.  So, we wouldn’t make it to the restaurants on our short list, but there’s no way we would be settling for a Miss Congeniality.  One of the restaurants meeting our criteria (save for the half-hour drive) was Pomo Pizzeria Napoletana in North Scottsdale.  Pomo was actually on our short list of Phoenix area pizza purveyors, not just for its Neapolitan pizza, but for an intriguing menu of Italian favorites.

Not that very long ago, any conversation about pizza in Phoenix began and ended with Pizzeria Bianco, one of the most highly regarded pizza restaurants in the world.  Pizzeria Bianco remains the most popular pizzeria in Phoenix with excruciatingly long waits expected for only a few tables.  Thankfully, the metropolitan area now has several outstanding pizzerias, none of which should be considered a runner-up or “Miss Congeniality.”  Pomo Pizzeria Napoletana is among them.  Eater’s compilation of 16 Essential Phoenix Pizzerias lists Pomo fourth on its list, describing its bill of fare as “tiny pies with a swollen rim of crust, soupy center, and delicate bite emerge from a sparkling gold-tiled oven, where they cook in about 60 seconds.”

Female Foodie, the epicurean empresses of the blogosphere, rated it fourth among the “Best Pizza in Phoenix: Top Ten Spots.”  Because Female Foodie helped us discover so many wonderful restaurants during our trip to Salt Lake City, we put a lot of stock in their recommendations.  Here’s what they had to say about Pomo: “With four locations throughout The Valley, Pomo serves some of the best pizza in Phoenix in a casual, welcoming environment.” Pomo also made Thrillist’s list of the “best pizza in Phoenix.”  Thrillist points out that “Pizza should be egalitarian, and thanks to Pomo, even your vegan and gluten-free friends can enjoy its deliciousness in a chic, comfortable space.”  There are several other similar recommendations, but you get the point.

As if Neapolitan pizza and an enviable Italian menu isn’t enough (there’s no such thing as an embarrassment of deliciousness), the Pomo Restaurant Group also offers homemade gelato under its Luna Gelateria banner.  Because such goodness shouldn’t be chattel for only a select few, there are four Pomo locations across the Valley of the Sun.  Alas, not all of them are Dude-friendly.  Thank goodness the North Scottsdale welcomes well-behaved (and very handsome) Dudes (and their not nearly as handsome dads).  The Scottsdale location is a 4,000 square-foot space with an expansive heated patio that effectively shields patrons from persistent rain.

As our server escorted us past a horde of hungry holiday revelers, we couldn’t help but note the energetic, youthful vibe and “blondness” of Scottsdale’s beautiful people.  The Dude, of course, drew oohs and aahs from diners wishing Santa would bring them a dachshund as debonair and handsome as our little boy.   We asked for a table at the far corner of the patio rather than risk reactions similar to teenaged girls at an Elvis concert.  There we could give The Dude a little privacy from adoring fans.  One person who did make it to our table was founder and owner Stafano Fabbri, a restaurant impresario who can actually handle himself admirably in the kitchen.  During his formative years Fabbri worked in the family bakery in Emilia Romagna, Italy, honing the bread-baking skills that would serve him so well when he moved to Phoenix and started a pizza dynasty.

As its website proudly declares, Pomo serves authentic Pizza Napoletana, the way it’s been prepared for hundreds of years in Italy.  If that statement alone doesn’t grab you, maybe this one will: “we treat each pizza like a piece of art.”  When you’re talking about Pizza Napoletana, edible art means each pie is hand-formed to no more than 3mm thick (0.11811 of an inch) then cooked for no more than 90 seconds to give the pizza a soft center and blistered crust. The cornicione, an Italian term for the “lip” or puffy outer edge of the pizza is soft and chewy and not much thicker than the pizza itself. Pomo is  one of a select number of pizzerias operating with the certification of the Associazione Vera Pizza Napoletana (VPN).   That means it’s the real deal!

Not since we devoured David Wagner’s most recent Rick Montoya mystery novel have we enjoyed perusing Italian themed content as much as we enjoyed studying Pomo’s menu.  Like David’s spell-binding novels, the menu builds intrigue and interest.  Just when you think you’ve figured out who did it, read a little further and another suspect turns up.  Our challenge was deciding what to order.  Would it be something from the homemade pasta section of the menu, maybe spaghetti carbonara or tagliatelle Bolognese?  Maybe it would be one of the seasonal specials such as cappelletti in brodo.  Would the lure of pizza pulchritude pull us in?  Maybe we should try the Northern Italy style pizza Rimini with a crust so thin and crispy it could be aged fashion model.

One certainty was that our table would be graced by the Antipasto Italiano, the chef’s selection of assorted Italian cured meats, cheeses and marinated veggies.  A bountiful board sure to sate carnivorous cravings as well as those of vegetarians was presented in minutes.  Edible art indeed.  From among the former were saber-sharp gorgonzola with its telltale blue-green veins and distinctive aroma to its crumbly, melt-in-your-mouth texture.  Other fromage (such as Parmesan Reggiano and Asiago) not quite as fetid adorned the plate.  So did luscious meats such as an 18-month salt-cured prosciutto that practically disintegrated on our tongues.  Two types of soppressata–hot and mild–were superb.  Vegetarian delights included a potent giardiniera, sun-dried tomatoes, sweetened walnuts and artichokes, all superb.

If you didn’t already know, “pomo” is the Italian word for tomato. For nearly a century and a half after being brought from the new world, the tomato was actually a forbidden fruit avoided throughout Italy.  Its use was eventually spurred on by the poor in Naples who cared more about filling empty bellies than subscribing to the ill-founded notions of the Catholic Church.  It was in Naples that in 1889, the tomato became forever entrenched in culinary history when an Italian pizzaiolo crafted a pizza whose colors reflected the red (marinara sauce), white (mozzarella cheese) and green (fresh basil) colors of the Italian Sabauda flag.

Though the tomato is now ubiquitous in Italian cooking and on pizza, we frequently enjoy pizza sans tomato sauce.  It’s not sacrilege when “pizza bianca” is constructed as well as pizzaiolo have learned to do so over the years.  Our server recommended the Burratella, a pie topped with hot soppressata, burrata, mozzarella, honey and chili threads.  Burratta, “essentially a shell of mozzarella wrapped around a lush mixture of cheese curds and cream all formed into one supple, malleable ball” is my Kim’s favorite cheese and this pie showcased the creamy, milky qualities she loves.  Not surprisingly my favorite ingredients were the hot soppressata and the chili threads, neither of which were particularly piquant to this fire-eater.  More than any pizza we’ve enjoyed in recent years, the crust had the inimitable aroma and taste of freshly baked bread, so good my Kim didn’t even mind the char.

Nearly as challenging as deciding what entree to order was choosing which gelato to enjoy.  Luna is reputed to churn and fold some of Valley’s most velvety, creamy gelato fresh in-store each day.   My choice was actually easier than my Kim’s. Gianduja chocolate with hazelnut) has long been my favorite gelato. Two scoops of gelato replete with a nutty-savory flavor singing two-part-harmony with rich Italian milk chocolate proved a most worthy finale to a memorable meal that was certainly no runner-up.

Pomo may not have been our first choice on a rare rainy Phoenix day, but it may have been the very best choice.