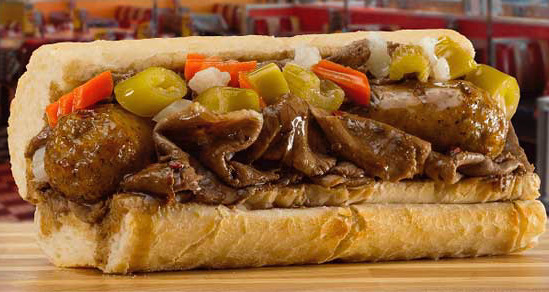 Portillo’s story is the story of the American dream, a rags to riches saga that began with a single hot dog stand opening in 1963. That single investment has blossomed into a multi-million per year chain with six different concepts and more than 40 restaurants in the Chicago area alone. The Portillo’s Restaurant Group has become, in fact, the largest privately-owned restaurant company in the Midwest. Among Chicagoland expatriates with whom I’ve worked (and one whom I married) Portillos is consistently named as one of the things they miss most about living in the Windy City.

Expatriates like my Kim know there isn’t anything like Portillo’s anywhere else in America.  Other than frequent trips to the Chicago area, their only recourse has been ordering hot dogs online through Tastes of Chicago which offers nationwide delivery of all your Windy City favorites.  In October, 2005, Portillo’s launched its first location outside of Illinois, the lucky (hot) dog being Buena Park, California.  Since then, multiple locations have been launched in several metropolitan areas including three in Phoenix.  During winter break 2020, the Portillos in Tempe was the first restaurant we visited in Arizona.

There’s no way you could ever mistake Portillo’s for a simple hot dog stand today.  Most Portillo’s restaurants are veritable theme parks–culinary shrines celebrating terrific food and the heritage of the Windy City in the 20th century.  Typically this means no discrimination between both sides of the law; more than perhaps any city in America, Chicago celebrates (and sometimes it elects) its criminals.  The Portillo’s in Tempe where these photos were taken under the ebony canopy of night is rich with photographs of the city’s nefarious and notorious characters as well as sundry antiques.  There’s something to see everywhere you turn.

Portillo’s doesn’t offer table service.  When you walk in, you’ll immediately proceed to a long, fast-food chain-like queue that seems a mile long.  You’ll be amazed at how quickly the line moves and how efficient Portillo’s is at taking and processing orders.  Within minutes after placing your order, your number will be called and you’ll pick up your order.  Tables are adorned with checkerboard tablecloths, the red and white ones reminiscent of Italian restaurant table settings.  Tables are spaced fairly close to one another despite the cavernous confines of this sprawling restaurant.

21 December 2020: True to its name, Portillo’s features the quintessential Chicago all beef hot dog in all its cornucopia of ingredients glory–mustard, relish, chopped onions, cucumber, sliced red tomato, kosher pickle and sport peppers piled onto a perfectly steamed poppy seed bun.  Most appropriately, it’s often said of the Chicago hot dog that it’s been “dragged through the garden.” The first time you have one, the Chicago style hot dog seems like an odd collection of toppings–some hot and some cold–that work surprisingly well together. The textures range from crispy to chewy and the flavors from tangy and acidic to pleasantly piquant.

The melange of ingredients is by no means a cover-up for an inferior wiener; in fact, the all beef wiener is the highlight of this hot dog.  Bite into it and your teeth will puncture an all-natural skin with a discernible snap, unleashing a salty, juicy meat impressed with a faint smokiness.  Th poppy seed bun is warm and pillowy soft yet substantial enough to hold in all the ingredients nestled in its crevice. These hot dogs aren’t for everyone, but aficionados swear by them. Some proprietors will swear AT you if you ask for ketchup.

21 December 2020: Portillo’s also serves one of the best Italian beef sandwiches in the City of Big Shoulders, a mighty feat in itself. Better yet, try the combination beef and char-grilled sausage sandwich, imbued with the most tender, thin sliced beef and the most succulent sausage. If you don’t ask for your sandwich “wet” (dipped in the “gravy” in which it is prepared), you’ll notice that Portillo’s uses a fairly hard-crusted bun, one that crunches when you bite into it. The giardinara is also crispy, an assemblage of pickled and spiced vegetables you can have in either the hot or the regular variety.

In October, 2010, a writer for Serious Eats, one of my favorite food blogs, endeavored with three friends to determine the very best Italian beef sandwich in the Chicago area.  Their quest took them to eleven purveyors of pulchritudinous beef where, in six hours, eating about three inches of each sandwich, they decided the very best Italian beef sandwich was Portillo’s.  Every sandwich sampled was topped with giardiniera and served wet. Portillo’s rendition was described as “having no flaws,” despite all the components being pre-cooked at a corporate location.  My favorite Italian beef from Johnnie’s finished third in their balloting.

21 December 2020: Portillo’s chocolate cake is a rich and moist piece of heaven, an absolutely delicious hunk of chocolate perfection. It’s diet-devastating deliciousness in a slab-sized piece big enough for three. The chocolate cake is perhaps the best from a triumvirate of desserts. Strawberry shortcake and caramel pecan cake are the other two. You can also sate your sweet tooth with bone-chilling cold shakes and malts. Vanilla, chocolate and strawberry are available in thirst-slaking sizes of small, medium and large.

Most thematic restaurants eventually become caricatures of themselves and begin to pay more attention to their atmosphere and less to their food.  Thankfully this hasn’t happened with Portillo’s which after nearly five decades in operation still serves one of the Windy City area’s best Chicago style hot dogs and so much more.