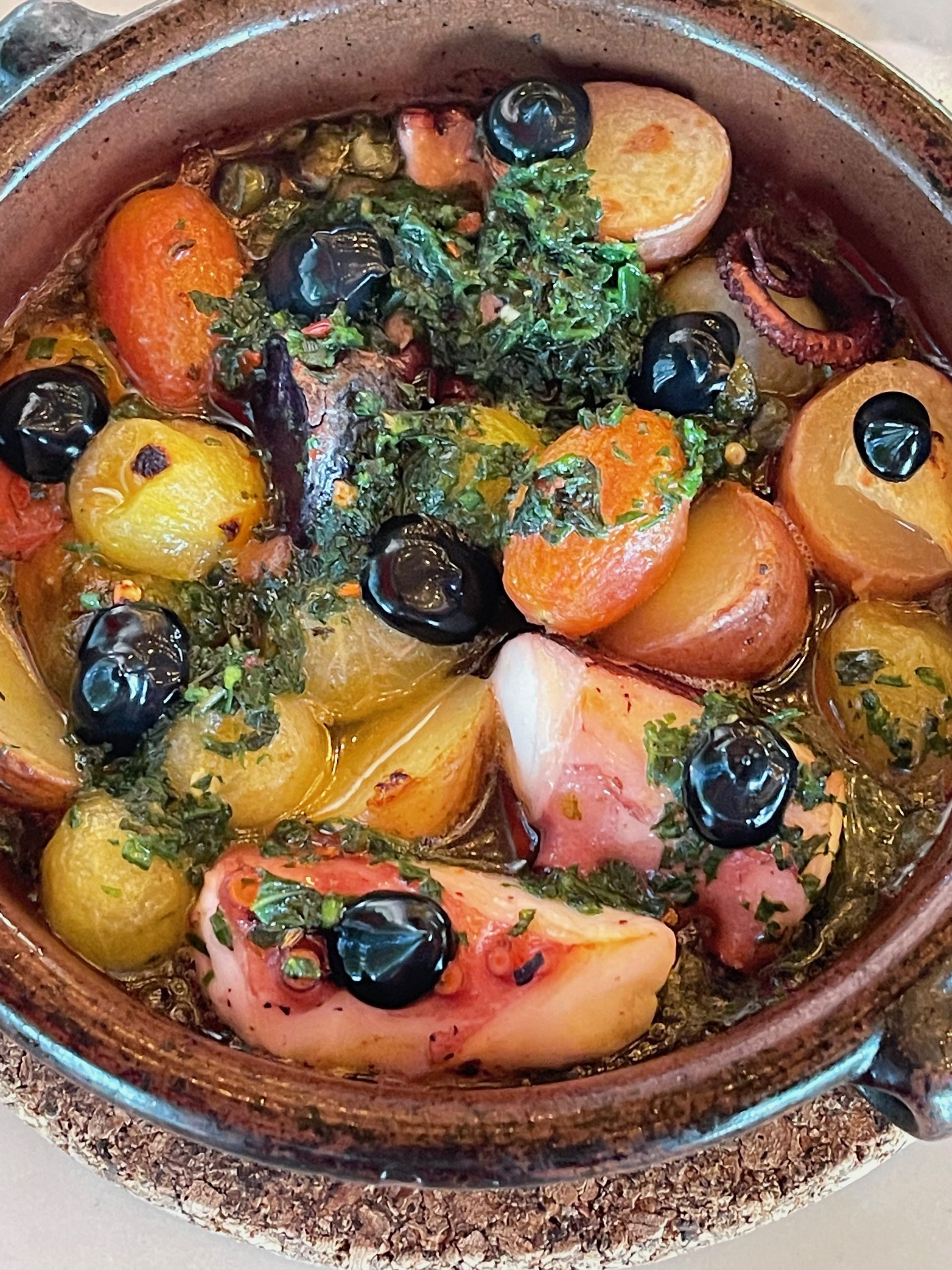 In the dark ages before satellite radio and podcasts, my Kim and I usually listened to books on tape to pass the time during long trips.  Mystery author Patricia Cornwell was one of my Kim’s very favorites.  The protagonist for Cornwell’s best-selling novels was medical examiner Kay Scarpetta, a perfectionist and workaholic who uses forensic technologies to solve crime.  Most of Cornwell’s novels kept us enthralled from onset to finale.  Then came that one novel, the one building up toward a slowly revealing and scintillating climax but which finished abruptly.  The bad guy did it!  The end!  That abrupt conclusion torqued so much I swore I’d never listen to another Kay Scarpetta novel.

My aggravation was so deep I removed a New York City restaurant named Scarpetta’s from my lengthy restaurant bucket list.  In my disappointment at the novel’s ending, I bucketed Scarpetta’s the fabulous Italian restaurant with Scarpetta, the forensic examiner who dared solve a murder before my Kim and I were ready to stop listening.  Though we haven’t visited New York City in decades, my bucket list was lightened by one all because a novelist thought 400-pages was enough.  Talk about short-sighted…her, not me.

When owner-chef Scott Conant left New York City and launched two restaurants–The Americano in Scottsdale and Mora Italian in Phoenix–in 2017, I was relieved to learn neither would be named Scarpetta’s.   Now my Kim and I would finally dine at one of the celebrated chef’s restaurants.  Alas, with the Cabrona virus surge nationwide, Mora Italian was closed for nearly a year, finally reopening in April 2021.  The silver lining in the closure was the opportunity to streamline the menu and undergo design renovations to reinvigorate the space and hone in on what makes Mora a special dining destination.  When it first launched in 2017, the modern osteria earned glowing reviews and numerous “best restaurant” awards.  Look for more of the same.

If the name Scott Conant sounds familiar, you just might tune in periodically to the Food Network program “Chopped” for which Conant serves as a judge along with other celebrity chefs and culinary personalities.  We were under no illusion that the famous chef would be preparing our meal, but to illustrate the point to my Kim I asked our server.  She confirmed that the chef visits “about once a month” though she’s never met or even seen him.  She explained that he’s still got business interests in New York that he looks after.  Hopefully they’re in a lower rent district than during his previous tenure.  In an interview with Worth, he lamented “I had an office space I paid about $5,000 a year in taxes to. And then over time, with De Blasio as mayor, it became $100,000 in taxes a year.”  Maybe Albuquerque’s Mayor Keller  isn’t so bad after all.

Mora, an Italian term for blue raspberries, is a spectacular venue.  One brick wall on the expansive front dining room is festooned with photographs of such golden age Hollywood celebrities as Audrey Hepburn, Dean Martin, Frank Sinatra and others.  A sleek bar described  beautifully by Phoenix Magazine’s Leah Lemoine as having “cushy wraparound banquette seating, polished wood tables and coppery modern light fixtures facing a gleaming bar framed by patterned blue tiles and periwinkle Italian barstools (with backs! can more bars please have stools with backs?).  The Dude, our debonair dachshund, didn’t care much about the bar, but he was impressed by the street-side patio with unobstructed views of the bustling Seventh Street and several canine passers-by.  He did not, however, like the unmuffled thrum emanating from vehicle sound systems trying to share their “music” with everyone.

Mora is intended to be “a modern take on the neighborhood eateries found throughout Italy” while the menu “chef Conant’s contemporary approach to Italian cooking reimagines time-honored classics such as rich polenta with porcini sugo, and makes bold new impressions with innovative fare such as black campanelle pasta with clams, Fresno chilis and bottarga breadcrumbs.” Serving only dinner, Mora is home to Chef Conant’s seasonal menu of modern osteria fare.  It’s a menu which will challenge you to make a decision.  Absolutely every item listed reads like a best-selling novel…one that hopefully doesn’t end prematurely.

The menu includes a section dedicated to Italian breads.  Along with France, Italy has arguably the deepest ingrained bread culture in the world so you know it’s got to be good.  Eight items adorn the antipasto section of the menu and they’re not the “usual suspects.”  Charred octopus anyone?  Six wood-fired pizzas with a canvas of dough fermented for two days, are imbued with more texture and flavor.  Seafood, chicken and a pork chop make up the main menu, but steak lovers aren’t left out.  There’s also a bistecca menu, Argentinian prime beef served with prezzemolo chimichurri.  The menu also includes sections dedicated to pasta and vegetables.

As is the egalitarian nature of our marriage, my Kim selected one “starter” and I selected the other.  Her choice–wood-fired baby carrots–came from the “Vegetables” section of the menu.  If you ever thought root vegetables were boring to anyone not named Bugs, these carrots will change your mind quickly.  And if you ever thought Mother Nature grew and shaped the Daucus carota into its inimitable size and shape, you’d be wrong.  According to the Food Network, “In the 1980s, a California farmer lamented that many of his carrots were not salable because they were “ugly.”  Instead of tossing these ugly carrots, he used an industrial bean cutter to shape them into what are now called baby carrots.  Today, baby carrots consist of 70-percent of total carrot sales.”

There’s absolutely nothing ugly about the flavor of wood-fired baby carrots.  In addition to providing higher levels of some nutrients than “regular” carrots do, they’re absolutely delicious, like sweet vegetable candy.  Then there’s the wood-fired component.  We all know what wood-firing does for pizza.  It’s a quick heat that lightly chars orange, yellow and purple carrots, rendering them soft but not mushy.  The purple carrots, in particular, have an intensely sweet flavor with slightly peppery notes.   The carrots are served atop rich, creamy mascarpone and topped with a salsa verde which provides a slightly acerbic contrast.  In my early youth carrots were the bane of my existence; now they’re one of life’s joys.

For 33 months now, Phoenix, has led the nation in home price increases. In the last year alone, the cost of the median house in the area has risen by a third. Maybe one of the reasons the Valley of the Sun is experiencing such a blazing real estate surge is because of all the restaurants offering charred octopus (squid ink aioli, salsa verde, tomatoes, baby potatoes).  Obviously restaurants serving charred octopus is correlative, not causative for the booming housing market.  Still, it’s impressive that Yelp has a list of the top ten grilled octopus in the metropolitan area.  That Mora was ranked only 17th is surprising considering just how much we enjoyed this fabulous dish.  There wasn’t as much grilled octopus in the dish as there were baby potatoes and tomatoes, but this was an antipasti not an entree…and it was fabulous!

Ever since Chef Kevin at Blades Bistro in Placitas, New Mexico introduced me to black cod with a miso glaze, it’s been my measuring stick for fish dishes. It’s an amazing dish Chef Kevin was taught to prepare by restaurant impresario and celebrity chef Roy Yamaguchi, founder of Hawaiian fusion cuisine. Black cod, also known as “sablefish” is a delicate, flaky fish with a rich, buttery flavor and silky sweet and rich overtones. It’s not often found on restaurants across the Land of Enchantment, but seeing it on Mora’s menu was one of the main reasons we visited.  Yeah, it’s that good!

Mora’s Calabrian Marinated Black Cod (salt baked sunchoke, charred radish, currants, caper-pignoli vinaigrette) showed me the versatility of black cod.  While Chef Yamaguchi’s version highlights black cod’s inherent sweet notes, Chef Conant’s rendition is more balanced, leaning toward savory.  Sadly, however, the portion was microscopic (it doesn’t even peek out from under the accompanying  veggies)…no more than five or six small bites.  That portion was a tease, a meager introduction to an outstanding filet that wouldn’t feed a child.  It’s probably easy to blame supply issues for the minuscule portion, but frankly there’s no excuse considering the price.

Not long after the dreaded “Y2K,” Chef Chris Bianco cemented his legend as the country’s premier pizzaioli with his flagship Pizzeria Bianco.  That Phoenix, Arizona, of all places could be celebrated for its pizza is still a shock to pizza snobs back East.  Virtually every national online and print media source that took notice of Bianco’s genius has since uncovered a number of Phoenix area pizzerias serving peerless pies.  We haven’t been to many of them, but it’s hard to imagine any pizza as good as Mora’s funghi pizza (truffled fontina fondue, pickled shallot).  Every element of that pizza was palate-pleasing to an nth-degree.  The crust and its charred cornicione had a wood-fired oven flavor reminiscent of the very best baked bread.  The mushrooms had a recently foraged flavor with an earthiness that coupled with the truffle flavor.  The pickled shallots were akin to what you might find at a Mexican restaurant.  For this pizza, I’d even dine at Scarpetta’s.

Just when we thought our meal couldn’t get any better (smallish portion of black cod not withstanding), our server recommended bomboloni (a duo of stuffed Italian doughnuts: chocolate hazelnut and dulce de leche), one of five desserts on the menu.  We’ve had bomboloni a number of times and were left with an indifferent impression–yeah, no big deal.  If you’re wondering what the difference is between American doughnuts and bomboloni, the former usually has a hole in the center, while the bombolini is like a jelly doughnut, made completely round and intended to be filled with a custard, jam, or cream.  My Kim called Mora’s bomboloni the best dessert she’s had in years.  Who am I to argue?  Each bite of the ethereal dessert was a joy.