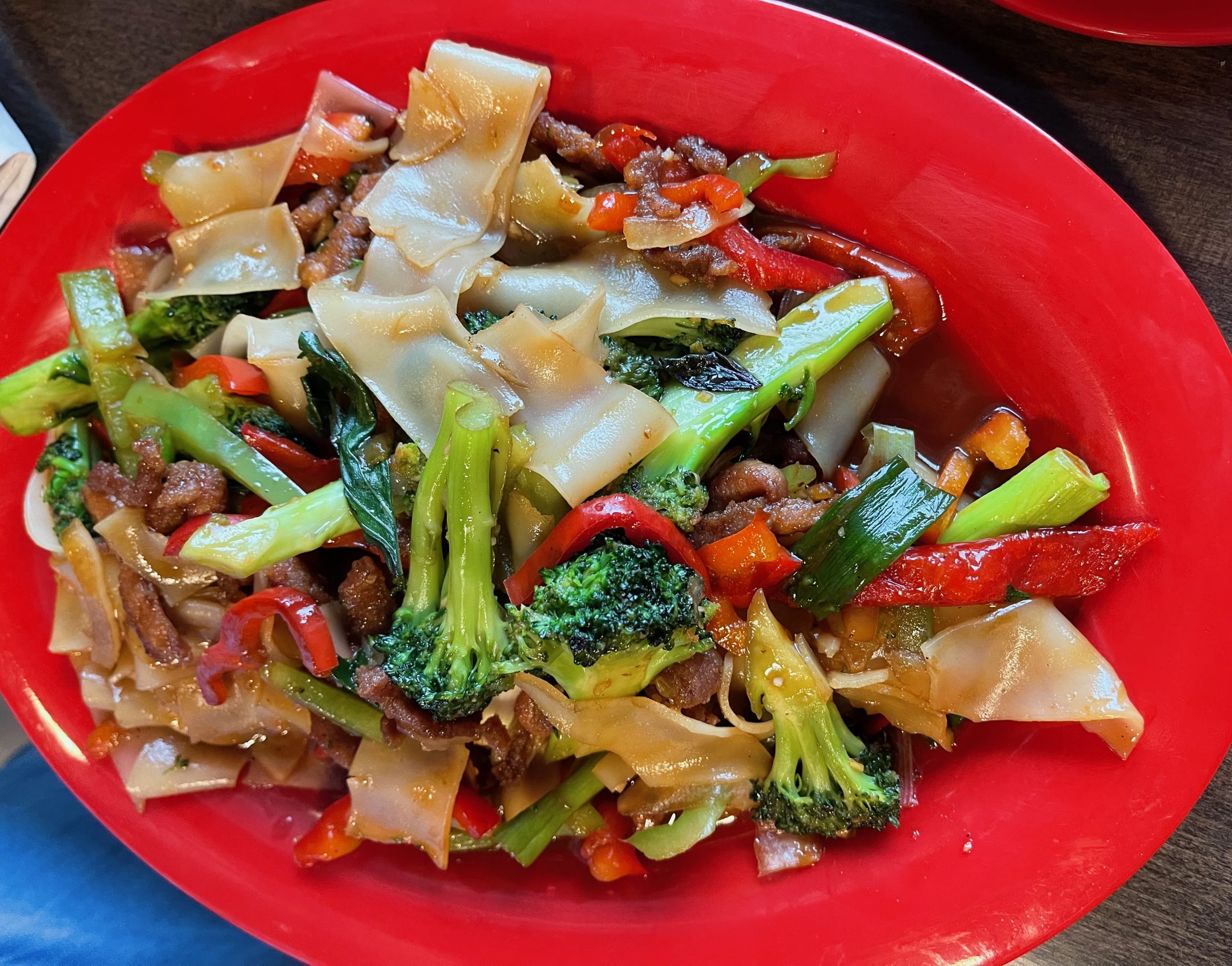 By chronological standards, Thai cuisine–especially as we know it today–is relatively new to the world culinary stage.  Culinary historians believe Thai cuisine may be as young as 1,400 years, coinciding with a mass migration of people from regions of China.  These settlers dined mostly on seafood, herbs and plants prepared mostly by stewing, baking and grilling (over time, stir-frying and deep-frying also became popular).  Large domestic animals such as water buffalo and oxen were too valuable to slaughter for food.  As such, meat was used very sparingly though considering the settlers’ propensity for seasoning, a small amount of meat went a long way.

While Chinese–particularly Szechuan–dietary practices were the most significant early influences, the introduction of other ingredients and culinary techniques began to define the Thai food with which we are familiar today. Foremost were curries from the exotic subcontinent of India which people infused with coconut.  After the European discovery of the American continents, Portuguese mariners brought chili spices to the region.  These were the forerunner of the incendiary dishes which give Thai cuisine their popularity and explosions of flavor.  Understandably, regional preferences were developed with five or so distinct regional styles of cooking defined.  Variations resultant from each region’s agricultural diversity led to the development of dishes unique to the particular region.

The first reason, of course, is that Thai restaurants provision hungry diners with some of the world’s best, most delicious food.  In 2021, CNN declared Thai food to be the eighth best in the world (beating out the United States and Mexico).  Not to be outdone, in 2022 Far & Wide used Instagram data to rank the world’s most popular cuisine, ranking 28 cuisines by deliciousness.  Instagram users ranked Thai food as the fifth most delicious cuisine in the world–well ahead of American cuisine (20th) and even Vietnamese cuisine (9th).  There are several other rankings of the world’s cuisine and in most of them, Thai food ranks very high.

The second reason for the large number of Thai restaurants in the United States is the concept of gastrodiplomacy, a strategy countries use to promote their traditional foods to foreign audiences.  Gastrodiplomacy often helps countries improve their global reputation and increase tourism.  Since 2000, the government of Thailand has helped fund and support thousands of restaurants around the world that prepare “authentic” Thai food.  Through its “Global Thai” program, the number of Thai restaurants across the world has more than tripled since the Millennial year.

Not all Thai restaurants are funded and supported by the Thai government, but that doesn’t mean independent restaurants can’t blow you away with their authenticity and deliciousness.  One such example is Thai Street which was founded by Michelle Waterson and Joshua Gomez, a married couple whose initial restaurant venture was Tako Ten, Dominic Valenzuela’s food truck brought to life in brick-and-mortar.  Thai Street is ensconced between Tako Ten and the Paleta Bar at Bridges on Tramway, a mixed-use development on Candelaria just west of Tramway.  A second Thai Street launched in the spring of 2022 in the space which previously housed perennial favorite Siam Cafe.

An eponymous mural depicting street life in Thailand festoons one wall.  The other wall depicts two in the pantheon of Thai gods.  A menu sits above the small overhanging stand where you’ll place your order.  Peruse that menu and you’ll quickly espy familiar favorites interspersed with items with which you might not be familiar.  If you’ve got an adventurous bent, order some of the delightful items you may not have tried before.  The menu is logically ordered and simple: appetizers, entrees, desserts and drinks.  Entrees are available with your choice of protein: beef, chicken, pork or tofu (shrimp is available for a bit more); and white rice (included), brown rice or sticky rice for a pittance more.  Heat levels are plain, medium, hot and Thai hot.

Spring rolls are believed to have originated in China sometime between 266 and 420 A.D.  Originally a seasonal food made for Chinese New Year banquets, they were traditionally consumed also during Spring when families needed to rely on preserved foods and pickled vegetables.  Because of the widespread influence of China throughout Southeast Asia, many Asian nations created their own version of Spring rolls.  One commonality is that they’re made by rolling a paper-thin rice paper wrapper with fillings.  Spring rolls at Thai Street are not only well-stuffed, they’re colorful and beautiful: orange julienne carrots, purple cabbage, green lettuce and pinkish shrimp.  Served with a translucent sweet-savory sauce, they’re a great way to start a meal.

As with so many Thai dishes, Thai sausages are replete with flavor.  While many other nations prefer making sausage by curing and smoking, the preferred method in Thailand is fermenting and drying.  This method lends flavors unique to the sausage; they’re unduplicated anywhere in Asia.  Sausages are a popular street food as well as a breakfast staple.  Thai Street serves its Thai sausage with sticky rice in the style of Isan, a region in Northern Thailand. It’s customary to eat sausage with your hands, and sticky rice makes it quite easy to grab and clump food into bites.  We were pleasantly surprised at the crispiness of Thai Street’s sausage, but not surprised at how much we enjoyed it.

Tod mun pla (fried fish cake) has long been one of my favorite appetizers at Thai restaurants.  Made well, they’re intentionally flavored courtesy of some of my favorite Thai ingredients–lemongrass, curry paste, chiles, cilantro and fish sauce.  How can you not love that?  Thai fish cakes are made with a mild white fish ground to a paste and mixed with the aforementioned ingredients.  Thai curry paste is usually the strongest flavor element, giving the fish cakes complex layers of flavors and plenty of personality.   Few things in life are better than fish cakes out of the fryer, but even when you can’t have them that way, they’re quite good.

There are many different “origin” stories as to how the name Drunken Noodles came about.  It certainly isn’t because alcohol is used in sufficient quantity to inebriate diners.  In fact, there’s absolutely no alcohol in the recipe. My favorite theory is that Drunken Noodles are so spicy, those partaking get drunk in the process of trying to quench their thirst.  My Kim ordered these noodles sans “heat” so there was no way to test the theory that the heat inspires drinking.  Thai Street’s drunken noodles (flat noodles, bell peppers, broccoli, green and yellow onions, basil) with your choice of protein made my Kim happy and I didn’t have to carry her to the car.

Habitues of Gil’s Thrilling… have probably wearied of me whining about how sweet most Thai curry at Albuquerque’s Thai restaurants can be. Thanks to Thai Street, you’re getting a reprieve.  Not only is the yellow curry (pineapple, coconut milk, bamboo, bell peppers, carrots, basil) pleasantly piquant, it didn’t won’t leave you pinging off the wall from sugar overload.  Yellow curry is typically the most mild of all Thai curries with a pleasant richness and sweetness.  Even at the “Thai hot” level of piquancy, flame-eating New Mexican’s shouldn’t have any problem with it.  I used to think of yellow curry as a “starter curry,” but even yellow curry is delicious.

Thai Street offers four desserts–banana samosa, mangos with sticky rice, Thai roti and Thai tapioca pudding–two of which aren’t often seen in this parts.  Thai roti is–along with mangoes and sticky rice–one of my favorite dessert anywhere.  While roti is a traditional flatbread from the Indian subcontinent, in Thailand the pan-fried bread is often preferred as a dessert.  Roti itself is thin and crispy, similar in texture to a layered phyllo dough pastry in Greece.  At Thai Street, the multi-layered roti is slathered generously with sweetened, condensed milk.  It’s a flaky, fabulous way to finish a meal.

Weather-permitting, the best seat in the house might just be on the exterior patio where views of the spectacular Sandias are available.  Those views and very good food at Thai Street are just two of the reasons The Bridges on Tramway are becoming a dining destination.