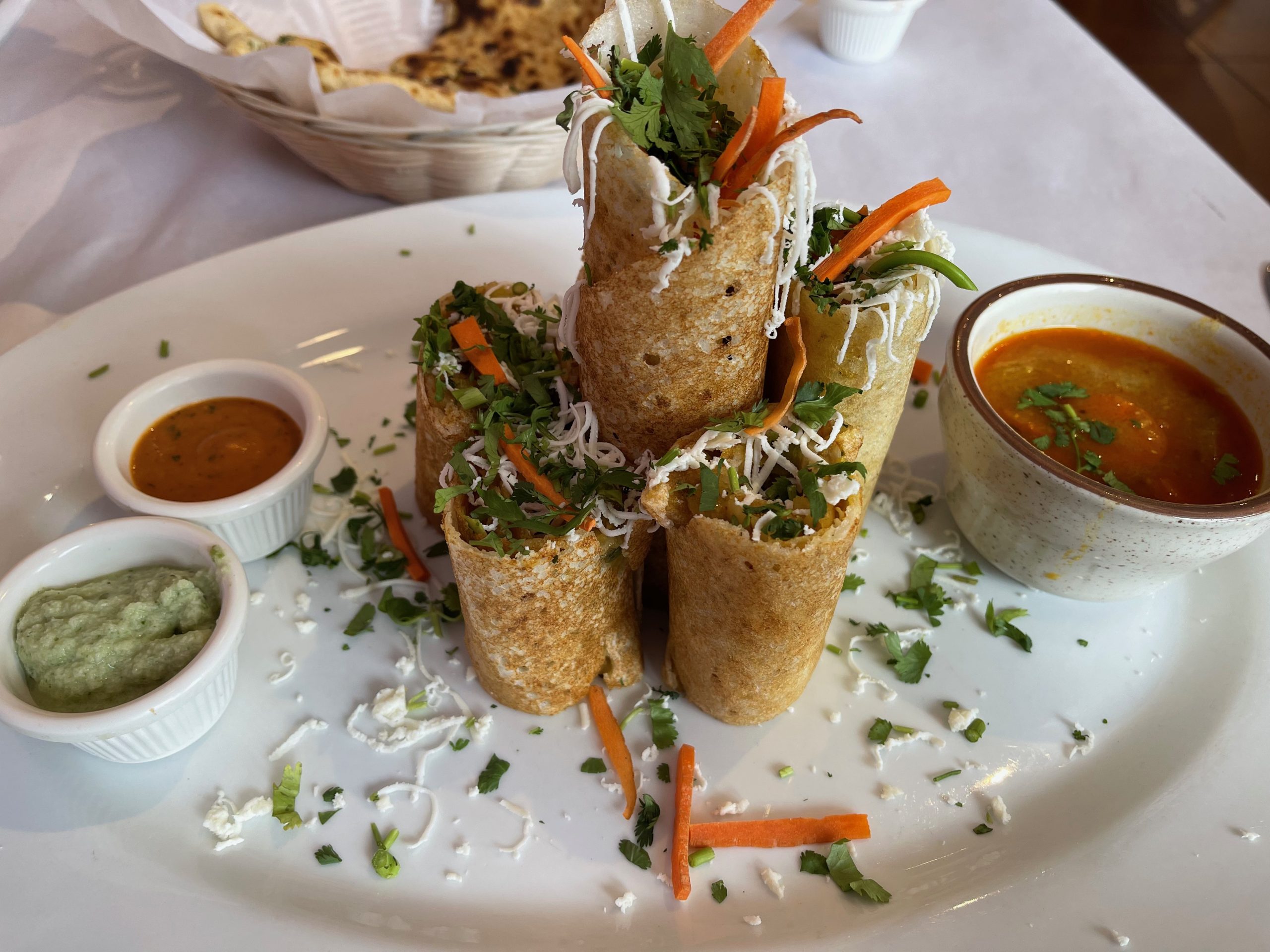 There is a charm about the forbidden that makes it unspeakably desirable.”
~Mark Twain

Ever since Eve succumbed to the wiles of a serpent who moonlighted as a used car salesman, humankind has been easily led into temptation.  As playwright Oscar Wilde once jokingly remarked, “I can resist anything except temptation.” We can all relate. We all face temptations of one sort or the other.  Like the forbidden fruit of Eden, temptation can be very attractive and very difficult to resist.  Though technically sin–actions or offenses that are offensive to God–is a concept to which only Christianity and Judaism subscribe, most of the world’s religions do believe in the concept of right or wrong–as defined by the laws and rules set forth by their respective gods and as interpreted by religious leaders within the respective faith.

Sometimes (or quite often as has recently been revealed) those religious leaders are also led astray.  One of the more benign examples involves a Brahmin, a member of the priestly class in Hindu society’s caste system.  Since alcohol was forbidden to Brahmins, one tried to ferment his own with rice.  When his efforts failed, he poured out the contents onto a pan and made a crepe out of it.  The name given to the Brahmin’s attempt at sinning by drinking alcohol was “dosha” which later became “dosa,” a term which translates to “sin.”  To compound the transgression, dosha was eaten with “chata” (what we call chutney today), a term which referred to a bad habit.  Essentially, dosha mattu chati (dosa with chutney) translated to “sin accompanied by a bad habit.

There are a number of “origin” stories for dosa and chutney, but since culinary historians can’t agree on one definitive version, the raconteur in me hopes you enjoyed the one with which I introduced this review.  Though consensus doesn’t exist as to the origin of dosa, one indisputable fact exists–dosa is one of the most popular of all Indian foods.  Renowned for a slight tangy taste (due to fermentation), the thin, crisp crepe is savory rather than sweet.  It can be eaten with a number of curries and vegetables.  If you’ve never had dosa, why not see what you’re missing at an Indian restaurant where “dosa” is on the marquee–Albuquerque’s Naan & Dosa.

Naan & Dosa is ensconced in a mixed use property on Wyoming almost halfway between San Antonio and Academy.  It doesn’t have prominent street-facing signage, but you shouldn’t miss it if your car windows are open and the distinctive aromas of Indian cuisine waft into your vehicle.  Those aromas are like the beguiling song of the sirens though Indian cuisine isn’t one temptation that will lead you to a catastrophic end.  Quite the contrary, Indian cuisine will likely awaken you to the realization that you should enjoy it much more often–especially when a trusted blogger reminds you frequently how wonderful it is.

Alonna Smith, the brilliant blogger behind My Indian Stove advises “Naan & Dosa is a very good restaurant to learn more about Indian food. Their South Indian dosa is a flavorful, no-too-hot, and crispy treat. I can also vouch for their tandoori dishes, which are cooked in a real wood-burning tandoor oven. And their garlic naan is not to be missed.”  Though Alonna has mastered the art of cooking Indian food (much to the delight of her husband Eric) and shares it with the world on her fabulous blog, she’s a regular at Naan & Dosa.  After repeated invitations, we finally found our way to Naan & Dosa, alas on a day in which Alonna and Eric couldn’t join us.  As my Kim said after our inaugural visit “Phooey on you! for not having brought me here sooner.”

Though Naan & Dosa has been delighting Duke City diners for just over one year (as of June, 2022), there’s a familiar element to the menu and the fabulous dishes you’ll enjoy.  That’s because Naan & Dosa was founded by the same great family who launched and operated Curry Leaf from 2006 through 2021.  Curry Leaf remains in the family; it is now owned and operated by one of the founder’s brothers.  As with Curry Leaf, there are two defining elements to Naan & Dosa.  First is the hospitality which extends far beyond the typical politeness you experience at most restaurants.  From the second you’re greeted to the time you leave, you’ll be treated in a familial manner.  Courtesy and kindness are hallmarks.  The second defining element, of course, is the food.  It’s fabulous!!!

As with many Indian restaurants, Naan & Dosa offers a buffet.  There’s no better introduction to Indian food than a buffet which offers so many options.  My Kim would tell you I’d just as soon line up to get the Cabrona virus as to stand in line for a buffet, any buffet.  Even if the lavish buffet at Naan & Dosa offered diamonds and gold, I’d pass and order off the menu.  It’s a weird food snobby prejudice, I know, but I’ve never been accused of following any crowd.  Fortunately my Kim doesn’t share my prejudice toward buffets and will typically make at least two trips.  Of course, she lords it over that she’s usually eating merrily while I’m still studying the menu.

Naan & Dosa immediately earned our high esteem when our mango lassi beverages were served on the rocks.  At most Indian restaurants in the area, mango lassi tends to be served at room temperature.  We were surprised at just how much better mango lassi over ice is.  Especially in the summer, this is the very best way to enjoy mango lassi.  Strangely when you study the world’s earliest or best bread cultures, India isn’t always listed.  Considering how absolutely wonderful naan (not to mention other types of Indian bread are) is, any omission is a travesty.  Naan & Dosa’s naan and garlic naan are both superb, especially when paired with one of the terrific chutneys.

My Kim and I haven’t always agreed on the concept of the buffet.  To her, a buffet is an opportunity to have as much of the one or two items she really likes.  To me, a buffet is an opportunity to diversify–to try as many different things as possible.  Since she’s the only one of us who partakes of the buffet line, the only opinion that matters is hers.  As is usually the case, she piles as much tandoori chicken onto her plate as she can carry.  Then, to appease me by diversifying her plate, she added a small portion of butter chicken and possibly the most popular dessert in India to her plate.  That dessert is called gulab jamum and it’s akin to eating syrupy pancake orbs.  They’re super sticky, sweet and irresistible…even to her.

Tomato soup is considered one of the ultimate in comfort foods across the fruited plain, especially when served with grilled cheese and particularly during a winter cold snap.  More and more Americans are adding basil to their tomato soup, a combination which not only smells and taste great, it just belongs…like fries and ketchup only better.  Madras tomato soup one-ups any tomato soup you’ve ever had.  Imagine tomato soup seasoned with exotic Indian spices and coconut milk.  Yes, coconut milk which lends a bit of sweetness to the tangy, seasoned tomatoes.  Now, if only Naan & Dosa offered grilled cheese sandwiches.

If you’re served most of the dosas on Naan & Dosa’s menu you might find it hard to believe dosa is typically a street food. The one dosa you might conceivable take and eat on the go–and eat with your hands–is the cone dosa, a A cone shaped crepe made with fermented rice and lentil batter.  That one you can tear and eat in small bites or dip it in a chutney before eating it.  You can also leave it whole and dip as you go.  Alternatively, you might order one of the seven other dosas on the menu.  These are stuffed then plated vertically with two chutneys on the side.  It may be one of the most pulchritudinous platings you’ve ever enjoyed.

That may especially be true if you order the Jindi dosa (rolled crepe topped with chopped onions, cabbage, bell pepper and homemade Szechuan sauce all garnished with homemade farmer’s cheese.  Farmer’s cheese, of course, is paneer, a fresh cheese requiring no aging or culturing.  It’s one of my favorites even though it tastes a bit like cottage cheese (which I dislike intensely).  Though the Jindi dosa may look too good to eat, after your first bite you’re not going to want to put them down.  The Szechuan sauce is one of a few Indo Chinese items on the menu, a mash-up of two of the world’s oldest and best culinary cultures.

Naan & Dosa is an exemplar of the tremendous cuisines of North and South India.  Both the naan and dosa are among the very best you’ll have anywhere.  Whether you’re hoping to learn more about Indian cuisine or are intimately familiar with it, Naan & Dosa is an outstanding option.