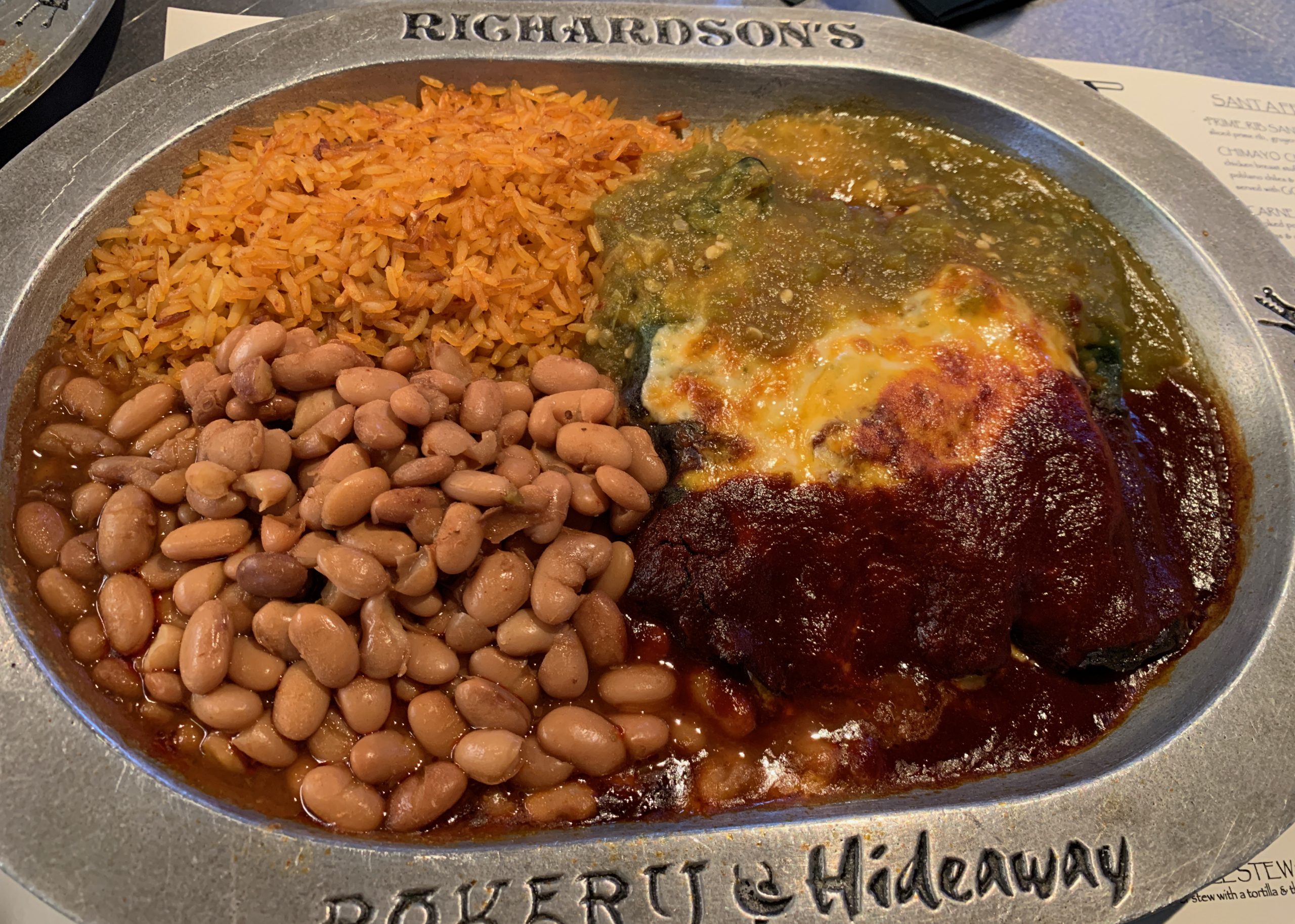 My friend and former Intel colleague Steve Caine will forever rue the day he asked me to help him with an expense report for a business trip he made to Portland, Oregon. His itemized expense report indicated he had dined twice at Chevy’s, a middling quality Americanized Mexican restaurant which wouldn’t survive in the tough Albuquerque market.   I teased him mercilessly. Worse, when my boss saw what the commotion was all about, he immediately put Steve on double-secret probation. Steve has never lived down visiting a Chevy’s in Portland where he could have had some of the country’s freshest and best seafood.

When the din died down, Steve admitted somewhat sheepishly that after two days in Portland, he was missing New Mexican food so desperately that he visited the closed facsimile he could find. It was either Chevy’s or a restaurant named Machissimo Mouse (seriously).  In truth, I’ve been there, too…well, not to Chevy’s and definitely not to Machissimo Mouse, but at a point in my business travels where the craving for New Mexico’s inimitable cuisine strikes like an addict’s need for a fix.

We New Mexicans are understandably proud, maybe even haughty about our cuisine. We don’t think anyone can prepare it the way we can. We scorn and deride what passes as chile (usually called chili sauce on many menu even though it often resembles gravy) in restaurants across the fruited plain. Some of us feel sorry for the states in which our chile can’t be found; others see that lack of chile as a reason not to visit those states.

The most frequent victims of our derision tend to be our immediate neighbors to our east and west. Both Texas and Arizona are proud of their Mexican food heritage, most of which self-respecting New Mexicans find inedible.  Phoenix, Arizona, a frequent destination of my business travels during my eighteen years with Intel, has several restaurants claiming to serve New Mexican food. I’d known about them for years, but have never visited any of them. How, after all, can any restaurant in the culinary wasteland (I emphasize only in terms of New Mexican food) of Phoenix serve anything even vaguely resembling our great cuisine?

The most frequently mentioned New Mexican restaurant of note is Richardson’s Cuisine of New Mexico whose sobriquet has nothing to do with New Mexico’s former governor. Richardson’s Cuisine of New Mexico is named for Richardson Brown, a part-time resident of the Land of Enchantment.  No doubt that, like anyone expatriated from New Mexico for only a few days, Brown had a powerful hankering for chile. He did something about it. He opened one of the highest regarded restaurants of any genre in Phoenix, a restaurant which will sate the cravings of any New Mexican.

Aside from my own personal cravings, what it took to get me to Richardson’s was Seth Chadwick’s eloquent review on Feasting in Phoenix, the wonderfully entertaining, informative and tragically, no longer published blog in which “Zagat meets Sex and the City.”  Seth was not only a great writer, he was a tough critic. He’s honest and direct in his evaluations and I found him, by far, the most trustworthy source of information on the burgeoning Phoenix dining scene.  Not prone to hyperbole, Seth’s review of Richardson’s was (chile) peppered with adjectives such as “fantastic,” “memorable,” “delicious” and “incredible.”  Still, I had my reservations as to whether or not Seth really understood New Mexican food. I should not have doubted my esteemed colleague and after my inaugural visit to Richardson’s immediately uttered fifty “Hail Seth’s.”

Not long after my inaugural visit in 2008, the original Richardson’s Cuisine of New Mexico burned to the ground.  Like the mythical phoenix of Phoenix, it was finally resurrected in early 2012 and now sits alongside sister restaurant Rokerij, one of three restaurants (the other is Dick’s Hideaway) under the Richardson’s banner.  Menus at the three restaurants overlap significantly, giving Phoenicians (??) a quick trip to New Mexico without leaving Central Phoenix.  Our server at the bar where we were seated told us many transplanted New Mexicans confess Richardson’s New Mexican cuisine is equal to or better than most in the Land of Enchantment.

The Richardson’s of 2020 is so much different than the Richardson’s I first visited in 2008.  The entrance to the capacious adobe-hued edifice resplendent in blooming bougainvillea takes you directly into a covered (that’s an understatement) patio that’s more indoors than it is outdoors.  The restaurant’s cynosure may well be the well equipped bar around which are situated two distinct dining areas. Because Richardson’s is so heavily trafficked, diners may be asked to sit on the bar stools surrounding the bar.  Paper placemats serve as the menu. Two toothsome coyote caricatures flank a cartoon banner on the placemat which proclaims “Richardson’s, Home of the Original Green Chile Potato.”

A brunch menu is available until 4PM, but you might also be able to order items from the dinner menu provided they’ve been prepared.  Both brunch and dinner menus are replete with items New Mexicans will find familiar: carne adovada, huevos rancheros, enchiladas, green chile stew, posole, burritos and even a green chile burger.  You’ll also espy items with New Mexican names which don’t quite seem as familiar.  Take the “New Mexico Sausage” described as “four grilled Schreiner’s jalapeno, cilantro, and pork sausages, served over wood oven roasted sweet onions and pinto beans.”  It sounds darn good, but in all my peregrinations throughout New Mexico, I’ve never even seen anything like that.

Nor is the menu exclusively New Mexican.  Would you believe osso bucco?  How about gumbo?  Or pappardelle (grilled roasted duck, spinach, bacon, cherry tomatoes, white wine sauce, Parmesan)?  You’ll even find a chophouse worthy menu of steaks–New York, tenderloin, sirloin, pork chops–and a netful of seafood items such as scallops, seafood linguine and garlic shrimp.  The menu’s diversity is equaled only by its price points.  It’s probably been a while since you’ve visited a New Mexican restaurant in which you’ve seen items priced at thirty (top sirloin), forty (scallops) and even fifty (New York steak) dollars.  Portion sizes are generous.  Any entree at Richardson’s is good for at least two meals, rendering the aforementioned price points irrelevant.

26 June 2008: On the menu, two toothsome coyotes are holding up a banner which declares Richardson’s “Home of the Original Green Chile Potato.”  It was something I had to try during my inaugural visit.  The green chile potato is in essence a twice-baked and whipped potato stuffed into a roasted green chile. The chile is of the Anaheim variety which is also known in some circles as a New Mexico chile. It is a very mild chile of medium size. On the Scoville heat index for chiles, it barely registers above a bell pepper.

Lack of piquancy not withstanding, Anaheim chiles inherit a fabulous smoky flavor when roasted. The flavor combination of roasted green chile and fluffy whipped potatoes, while quite good, heightened my preconception that Richardson’s chile would be of the “gringo” variety with absolutely no heat.  I should commit to memory that often used adage about assuming. Thankfully my preconceptions were absolutely without merit. Richardson’s chile (except for the Anaheim) is not only wonderfully tongue-tingling piquant, it is absolutely delicious and just pleasantly piquant.

26 June 2008: Consider this heresy if you will, but I believe Richardson’s red chile stacks up favorably to the chile served at La Choza in Santa Fe, one of the best purveyors of red chile in northern New Mexico. Much to my surprise, it is better chile than I’ve experienced in dozens of restaurants throughout New Mexico. Wow, I never thought I’d ever say that! Hopefully Governor Lujan-Grisham won’t make me renounce my citizenship.  One of the best ways to experience that fabulous chile is with an order of blue, red and white enchiladas. The blue represents the blue corn tortilla base for the triumvirate of chicken, cheese and grilled shrimp enchiladas served with your choice of green or red chile (or both if you prefer though my waitress didn’t get the term “Christmas style”). Even without the worship-worthy chile, the enchiladas would have been very good. With the chile, they obtain a rarified status.

26 December 2020: After being told how transplanted New Mexicans consider Richardson’s cuisine equal to the foods prepared and served within the Land of Enchantment’s sacred borders, we asked where the chile is procured.  Our server told us the chile comes from Ahwatukee.  “Do you, by chance, mean “Albuquerque,” my Kim asked.  “Oh yeah, that’s it. Albuquerque.”  It would have been pointless to debate the chile’s true origin when we could instead be enjoying it.  My Kim’s carne adovada and eggs proved very enjoyable even though the carne was in the form of chunks, large but tender and smoky chunks of porcine perfection bathed in a burgundy colored chile from Albuquerque.  The carne adovada was served with roasted papas and a tortilla so thin, there’s no way it could be used to scoop up any carne adovada.  Still, for my adovada adoring bride, Richardson’s carne adovada was worth the trip.

26 December 2020: Just as it was during my inaugural visit, my choice were the New Mexico enchiladas (choice of three: green chile pork, chicken, vegetable, grilled shrimp, beef, cheese and smoked turkey topped with red or green chile (or both) served with rice and beans).  The triumvirate of grilled shrimp, green chile pork and smoked turkey is one not often found in New Mexican restaurants across the Land of Enchantment so I availed myself of the opportunity to enjoy them.  As during my first visit, the chile had a respectable piquancy even a New Mexican born-and-bred native would salute (disclaimer: I ordered the “Level 2” which our server said was lethal.)

26 December 2020:  But I digress.  We started our meal with the New Mexico Queso (chorizo, spinach served with house tortilla chips).  For the first time in memory, we still had a pile of chips and half the queso remaining when our entrees arrived.  Usually we’ve wiped out the paltry amount of queso served us.  Lesson learned for New Mexico’s New Mexican restaurants–be more generous with your queso.  Also, be more inventive.  The chorizo and onions were a wonderful addition, much like Mexico’s queso fundido, but maybe even better.

My friend Steve Caine would have been entirely forgiven had he dined at Richardson’s, as good a New Mexican restaurant as there is in New Mexico. That’s saying a lot!