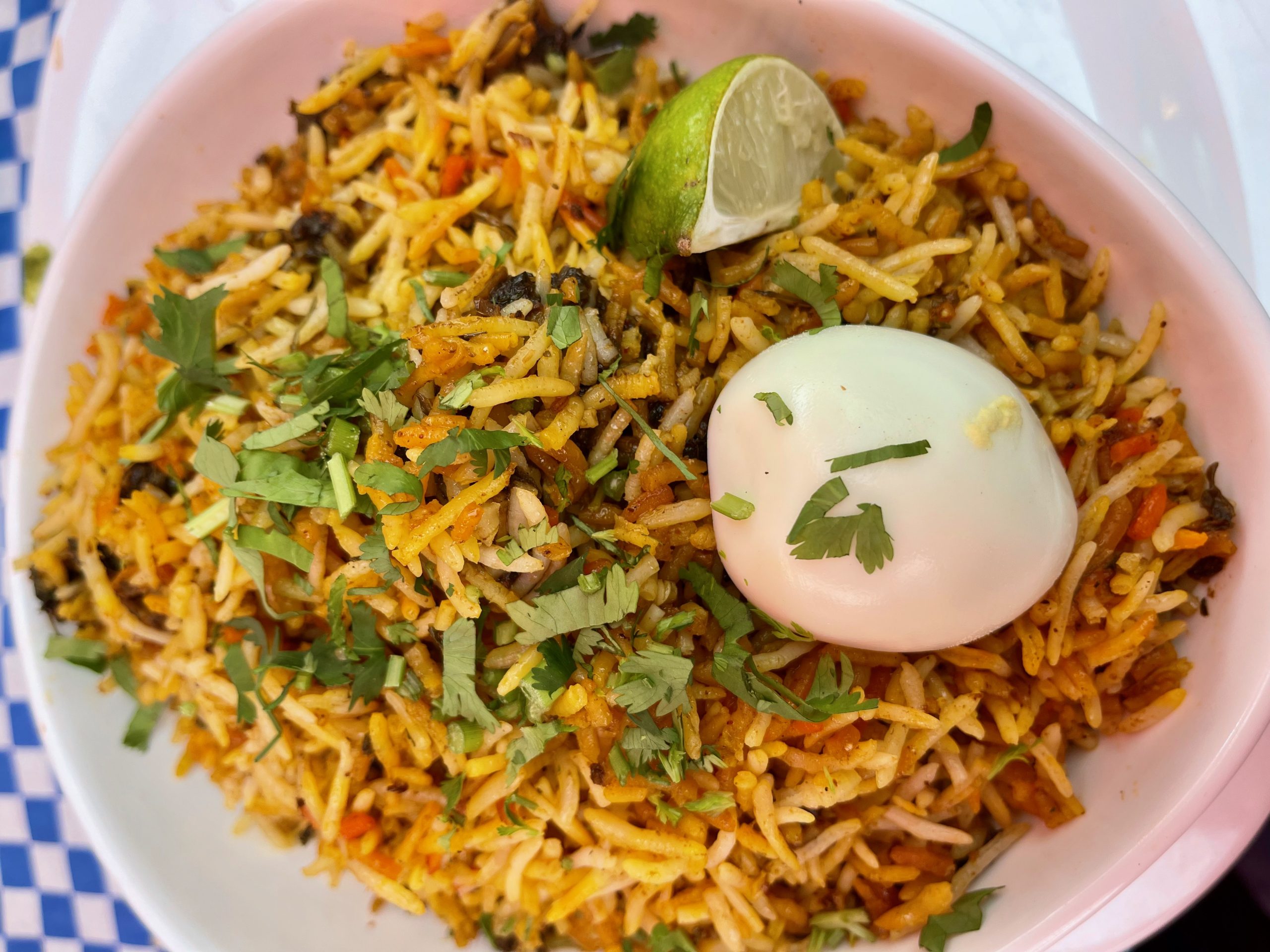 When the New York Times described biryani as “the Indian equivalent of arroz con pollo or paella,” legions of Southwest Asians and culinary cognoscenti cried “Fake News!”  The media  megalith with the masthead that boasts of “all the news that’s fit to print” may as well have declared the Taj Majal as the architectural equivalent of Randy’s Donuts in Los Angeles or the Longaburger Company Building  in Ohio.  It’s highly unlikely Latin America and Spain are nearly as passionate about arroz con pollo or paella as denizens of the exotic subcontinent are about biryani, a dish The Better India boasts “epitomizes the zenith of Indian cuisine.  Zenith–that means biryani is at the very top, as good as it can possibly be.  So there, New York Times!

Just by its title the book Biryani: The King of Indian Cuisine gives you an idea how esteemed the dish is.  The inside cover explains “biryani is the most beloved dish in every corner of India and many parts of Asia.”  In India, biryani has achieved legendary or mythical heights.  Chef Suvir Saran believes, “Biryani is the mirror image of our population and as the clock is ticking, its a test of time. Biryani has survived longer than any Human being, it will live forever because of its history, taste and texture.”  You’re probably not going to read such effulgent testimony about many other foods.

So just what is biriyani, a dish so esteemed it had to be gifted to mere mortals by the gods.  Thrillist calls it “the food of royalty” and indeed, biryani boasts of a royal lineage.  Indian folklore attributes the origin of biryani to the queen for which the incomparable Taj Majal was built.  According to legend, she once visited the Army barracks and discovered under-nourished soldiers.  Dismayed by the sight, she ordered that a dish be composed that would be well-balanced in flavor, nutrition and energy for the men.  Her chef created a dish replete with protein (meat) and carbohydrates (rice), the very first biryani.

Describing biryani as a meat and rice dish is selling it far short.  It’s infinitely so much more.    Made up of freshly cooked aromatic rice marinated with a combination of spices and the meat of your choice (chicken, mutton, fish or egg), it’s a layered, fragrant dish that takes hours and hours to prepare.  Biryani is an amalgam of spices and condiments that may include ghee (clarified butter), nutmeg, mace, pepper, cloves, cardamom, cinnamon, bay leaves, coriander, mint leaves, ginger, onions, tomatoes, green chilies and garlic. Premium varieties include saffron. In all biryani, the main ingredient brought to its zenith of flavor by the exotic spices is chicken or goat meat (though beef or seafood may also be used). The dish may be served with chutney or raita, korma, curry or other complimentary items.

If you’ve had biryani at any Albuquerque area Indian restaurant, you’re probably wondering why I would be singing the praises of a dish no Duke City Indian restaurant–great as they are at preparing so many other dishes–does particularly well.  That’s because July, 2020 celebrated the launch of New Mexico’s first restaurant dedicated to preparing biryani.  With a name like “Bawarchi Biryanis” it’s got to be good.  According to the restaurant’s website, Bawarchi means “the chef” as an homage to the generations of chefs who kept the cooking traditions alive.  To that end, Bawarchi not only offers an assortment of biryani dishes, it’s got a versatile menu showcasing Indo-Chinese dishes, a fusion of deliciousness traced back to the Silk Road cultural exchange.

Within days of its launch, Bawarchi had earned accolades from my friend Alonna Smith, the mastermind behind My Indian Stove.  About Bawarchi, Alonna, a very accomplished home cook, told me “It was the best Indian food I’ve ever had.”  She informed me that “The franchise owners are from the South Indian State of Andhra Pradesh which is renowned for its unique and aromatic spices.” Co-owner Arsha Khan and her husband Irfan also own Apna Bazaar on Montgomery, an Indian grocery, that has been open for six months.

With the addition of New Mexico’s sole franchise, Bawarchi now has a presence in 26 states and in two Canadian provinces.  When he found out Bawarchi was opening in Albuquerque, my friend and colleague Chris Parackal, a California transplant very familiar with the concept was ecstatic, declaring Bawarchi Biriyanis  “out of the world good.”   After his inaugural visit, he reported “I ordered the Hyderabad goat dum biryani, a legendary classic. it was pretty delicious. the sauce, the rice and the meat all had equal participation in a bit and they all contributed to the flavours palette evenly. They didn’t ask for the spice level but it was just right. My father in law who has a high intolerance for spice actually sat through it because the flavour outweighed the burn lol.  Overall it was a great experience. You you would expect that a busy restaurant like that would be cutting some corner on quality to meet customer demand, but not them.”

Bawarchi Indian Cuisine is located on Juan Tabo between Comanche and Candelaria.  It occupies the space previously held by Piatanzi, a very popular Italian eatery which still operates at its Girard location.  The building–which has neither the trappings of an Italian nor Indian restaurant–is spacious and comfortable.  Because we were dining with our debonair dachshund The Dude, we were the first guests to dine at the patio, a work-in-progress.  Our server, a genial gentleman from Alexandra, Egypt was surprisingly familiar with the menu and took excellent care of us over the duration of our meal.

One glance at the menu will quickly confirm Bawarchi is a special place, an Indian restaurant that doesn’t offer the usual suspects or (gasp) a buffet.  Just look at the menu categories: Indo-Chinese, Bawarchi Biryanis, Bawarchi Pulavs, Crepes, Tandoori Sizzlers, South Indian and Soups.  There are, of course, appetizers, entrees, beverages, breads, side orders and desserts as well.  Our focus was almost entirely on the Indo-Chinese section of the menu and of course, the Bawarchi Biryanis.  My Kim had never before had biryani and Bawarchi delivered a first-rate first-time experience.  She can’t wait to return.

Why India isn’t more widely mentioned in conversations about the world’s best bread-baking nations is beyond me.  Savvy bread buffs will tell you naan is every bit as good as any bread restaurants from any other country can offer.  Bawarchi not only offers naan, but roti, kulcha and other fabulous members of the staff of life.  Bawarchi introduced us to chili naan, a “why hasn’t this been done before” concept that proved as fantastic as its name implies.  One bite of the chili naan and my Kim uttered “no mas.”  It was too piquant for her.  Fortunately, we also ordered butter naan, one of the most popular flat breads in Northern India.   As naan goes, there is none better!

Indo-Chinese cuisine is the adaptation of Chinese seasoning and cooking fashioned to Indian tastes. Quite simply, it’s the fusion of two of the globe’s most ancient, most revered and most flavorful cuisines. Most of the Indo-Chinese dishes I’ve experienced have been intriguing, eye opening and mouth-watering. This fusion came about in the nineteenth century when the revered Chinese Hakka Noodles were brought to Kokkata in the Indian sub-continent. Culinary historians believe this was the first melding of culinary culture.  The fusion of cuisines ultimately led to the birth of India’s very first Chinatown, Tangra.

Among the most interesting fusions is the combining of rice and noodles in one dish.  Many chefs will tell you that’s virtually a cardinal sin (though they all seem to love rice noodles).  Bawarchi offers several dishes with this combination.  A quick glance of the Gobi Manchurian (pictured above) might have you thinking “Orange Chicken” and indeed, the resemblance is amazing.  Instead of chicken, authentic Gobi Manchurian is made with cauliflower florets (known as Gobi in India) which are deep fried and tossed in a spicy sweet and sour Indian Chinese sauce. Bawarchi’s rendition was made with chicken, not that you’ll hear any complaining from us.  Although orange chicken is often far too sweet for my tastes, the spiciness of the Gobi Manchurian will remind you this dish is truly seasoned and spiced for Indian tastes.  It is magnificent!

Despite my pleading, cajoling, bribery and threats, my Kim (who’s very much her own person) didn’t order a biryani dish.  Instead she ordered her very favorite of all Indian dishes–tandoori chicken  (grilled bone-in chicken marinated in yoghurt, garlic, ginger and fresh ground spices).  To our recollection, we had never before experienced tandoori chicken arrive at our table sizzling like a plate of fajitas.  Fragrant smoke wafted upward, signaling in advance how delicious this tandoori chicken would be.  My Kim loves tandoori chicken so much that it’s often the only item she piles on her plate at Indian buffets.  Bawarchi’s tandoori chicken was probably the freshest she’s ever had with a just out of the clay oven, perfectly spiced qualities she loves.  She considers the use of any sauce a desecration, but I enjoyed the smoothness of the raita, a yoghurt-based sauce and its slightly sour flavor.

Ladies and gentlemen, for the main event of the evening may I present the undisputed biryani champion of New Mexico, Bawarchi’s Hyd Goat Dum Biryani.  Considered “the crown prince of Hyderabad” (remember biryani is the king of Indian cuisine), Hyderabad Goat Dum Biriyan is An irresistible medley of goat, spices, ghee, saffron, and flavorful basmati rice.  During the eighteen glorious years I spent with Intel, we often outsourced much of our development work to programmers in Hyderabad.  Had I known the biryani in the “City of Pearls” was so terrific, I would have volunteered to consult on development projects there instead of meeting with developers in the middle of the night.  Of course, we probably would have enjoyed so much biryani that there wouldn’t have been much work being done.  The Hyd Goat Dum Biryani at Bawarchi is the best I’ve ever had–better even than biryani I had in London.  Even gnawing around the boney goat was a pleasure.  The rice was transformative, an exemplar of why this dish is so highly regarded–not only in the exotic Indian subcontinent, but among savvy westerners.

If you’ve ever been underwhelmed by so-called biryani at other Indian restaurants, let Bawarchi Indian Cuisine show you how it’s done.  Bawarchi’s biryani will transport you to the zenith of deliciousness.