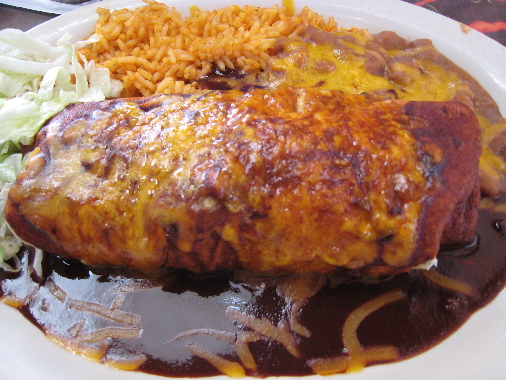 In January, 2010, the Travel Channel traveled from coast to coast to uncover the 101 tastiest places to chow down–“joints serving some of the biggest and best dishes of deliciousness around.” Calling it the “most definitive and appetizing countdown food fanatics have ever seen,” the show featured five one-hour specials that transported viewers “on a non-stop, coast-to-coast, mouthwatering tour of the 101 absolute best places to get your grub on in the country.” The list was “certified by the people who know best — the locals!”

Only one New Mexico restaurant made the list, but it’s a great one worthy of recognition. At number 45 on the chow down countdown was Cecilia’s Cafe, a downtown Duke City institution. The program described Cecilia’s as “where they serve up New Mexican food so messy not even a stack of napkins won’t help.” The description aptly describes the Fireman’s Burrito, “a burrito bursting with so many mouthwatering and mind-blowing fillings, they serve it with a side of…apron.” The Travel Channel gave it a “four-napkin” rating.

This behemoth burrito was created by Cecilia Baca at the behest of two local firemen Cecilia describes as “characters” who came into the restaurant famished and asked for something really big. Cecilia put together sausage, bacon, eggs and hashed browns then loaded them into a homemade tortilla and piled on red chile, green chile, beans and carne adovada. She topped the “gloriously messy mound of chow” with cheese and red and green chile. Cecilia says it weighs between two and a half and three pounds, depending on who makes it. When she makes it, it’s always three pounds.

The firemen appearing on the segment commented that it’s literally big enough to feed five people. Even if you don’t have a gurgitator’s appetite or five friends and relatives to share it with you, there’s always great food awaiting you at Cecilia’s Cafe. Read my complete review here.