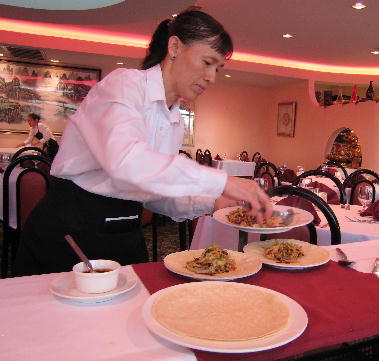 There’s a Cantonese saying that translates to “anything that walks, swims, crawls, or flies with its back to heaven is edible.” The Chinese diet counts as delicacies some things which would repulse the more sensitive American palate.

It’s not just the Chinese who will imbibe, ingest and intake what we might consider sundry strangeness. Each culture, including American, has foodstuffs other cultures find shocking. One culture’s strange and inedible is another’s traditional favorite. Take cheese, for example. Until rather recently, few Chinese would eat cheese, considering it the fetid spoils of milk.

As it grows smaller, the world has become increasingly fascinated by watching the consumption of the bizarre–bizarre in this case being a voyeuristic term that doesn’t apply to the culture in which the food is enjoyed.

The Travel Channel’s Bizarre Foods With Andrew Zimmerm chronicles the adventures of an intrepid eater who will try any and everything put in front of him, regardless of how much it writhes, palpitates or squirms as he puts it in his mouth. It’s televised shockfest at its most appealing to those of us who think we’d try just about anything.

Compared to Zimmerm, most of us are rank amateurs. Thousand year old eggs, bird’s nest soup, chicken feet–that’s nothing compared to some of the food that has crossed his lips. Most of us find some of those foods so revolting, we’d rather that food not even cross our minds.

As a newly minted quintegenarian, my ventures into the world of culinary “I dare you’s” has gone the way of other youthful affectations. Now when I think of strange and different, it’s usually in reference to some sauce I haven’t tried before.

One such sauce is the strawberry sauce offered with chicken at the Amlee Gourmet Restaurant in Las Vegas, Nevada. I had encountered strawberry sauce in a Chinese restaurant only one time previous and that was more than thirty years ago in Massachusetts.

Considering all the other fruit-based sauces–lemon, pineapple, orange– are pretty passé, it’s puzzling that strawberries are relatively uncommon on Chinese dishes. In 2004, China was the third largest exporter of strawberries bound for the United States, so it’s obvious strawberries are grown in China, at least commercially.

The staff at Amlee couldn’t answer my questions, but they are certainly proud that their signature dish is so uncommon. Apparently other Vegas Chinese restaurants have tried to copy the dish, but results have been less than desired.

Strawberry chicken is just one of the unique specialties crafted by owner/chef Steven Lee, a pioneer in the Vegas Chinese restaurant scene.

Lee is an affable man with a wide circle of friends. The walls of the front room are festooned with signed pictures depicting a beaming Lee in the company of such luminaries as former President Bill Clinton, U.S. senator Harry Reid, comedian Bill Cosby and a host of other show business celebrities and politicians. One can assume they have enjoyed the chef’s handiwork in the kitchen.

Amlee Gourmet Chinese is well off the “eaten path” on a street directly south of McLaren Airport. It’s several miles southeast of the famous strip and as such, is a destination restaurant.

The decor is tasteful and the staff is friendly and helpful. The tableside service is some of the best we’ve experienced in Las Vegas.

Best of all, the food is excellent. In previous visits to Sin City we’ve dined at four-star Chinese restaurants bearing the name of celebrity chefs and we’ve visited no-name dining establishments in Chinatown. Most have disappointed.

Amlee is the very best Chinese restaurant we’ve uncovered in a city with hundreds of dining options.

The menu includes several options not commonly found at other Chinese restaurants. The “Gourmet” portion of the restaurant’s name is certainly earned. It’s not just the strawberry chicken which has made Amlee famous and popular.

A great way to start your meal is with an order of moushou pork, a dish that usually won’t make your socks roll up and down unless it’s exceptionally well prepared. At Amlee, the moushou pork is exceptional.

One of the things that makes this dish stand out are the shards of marinated shredded pork which are deliciously discernable among the scallions, bamboo shoots, Shiitake mushrooms, bean sprouts and other high-quality ingredients.

The pancakes into which the amalgam is scooped aren’t of the paper-thin variety which crumble upon contact. In fact, we’ve had thinner tortillas in some restaurants than these pancakes. Each order makes four pancakes. A side of Hoisin sauce accompanies them.

Our waitress lovingly crafted our appetizer for us (nothing scares me more than the words “some assembly required”). Some moms don’t spoon-feed their children with as much care as our waitress showed us. She was exceptionally kind and attentive.

Our waitress also served our dinner tableside, wheeling a cart with our entrees to our table then portioning our entrees onto our plates. Let’s see a five-star restaurant do this.

The sauce for the strawberry chicken is a neon red-orange color and is nothing like strawberry jam. A thickening agent (probably pectin) brings the sauce to the consistency of light syrup, but true to its name, the entree does have the unmistakable flavor of sweetened strawberries. The sauce is applied generously to strips of white meat from the chicken breast and thigh which are lightly coated like fried chicken. The chicken is moist and tender with absolutely no fat or sinew as promised by our waitress. This is a high-quality and very delicious entree!

Amlee Gourmet uses only boneless shoulder steak for this entree and the quality shows. Being no need for heavy sauces to mask inferior beef, your taste buds will experience nothing but lightly sauced (teriyaki and soy) pure beef grilled to absolute perfection.

Amlee Fried Rice is an absolute must with your entrees. This egg-fried rice includes shrimp, barbecue beef and pork as well as the standard vegetable accompaniment cut thin and small. It’s as flavorful and moist a fried rice dish as we’ve had in Las Vegas.

Amlee has several dessert options including chilled lychee fruit and glazed bananas, but there’s a chance you won’t have room for dessert–and will still have plenty of leftovers to take home. Frankly, I’d like to take Amlee Gourmet home to Albuquerque with us. It’s the type of Chinese restaurant the Duke City needs.