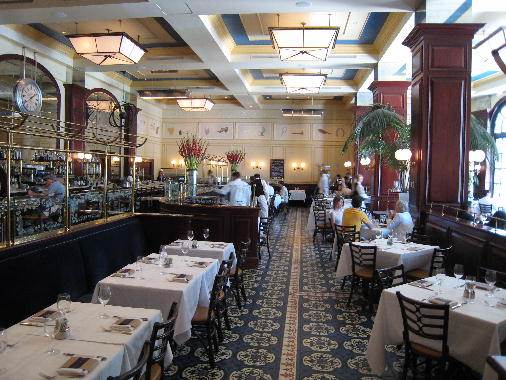 Thomas Keller is the owner and chef of one of the world’s most highly acclaimed and famous restaurants, but despite all the accolades and honors the French Laundry has garnered over the years, he isn’t nearly as famous or popular as his celebrity protégés. One protégé is a provincial rat named Remy whose aspirations to become a great chef despite a lack of formal culinary training mirror Keller’s own path.  Remy’s focus and fastidious attention to detail are known to be patterned after Keller.  To make the restaurant scenes as realistic as possible, the film’s producer interned in the French Laundry kitchen.  Other members of the film’s creative braintrust studied at length to channel the master’s style and passion.   Keller served as the key consultant for all cooking done in the movie, hence the authenticity.

Keller was also the creative genius behind the “world’s greatest sandwich” as prepared by another celebrity protégé, Adam Sandler in the film Spanglish.  The sandwich is an embellishment of the BLT, but the way Keller taught Sandler to prepare it, it is far from a pedestrian BLT.  It would seem that Keller is a celebrity chef behind the celebrities, but it might be more accurate to call him a celebrity to the celebrities.  He sets the standard to which other celebrated chefs aspire.  In the pantheon of the world’s greatest chefs, he is in rarified company, a towering figure who commands the respect and admiration of all other chefs.  He is the very best in the world!

Keller’s magnum opus, the French Laundry restaurant, in Yountville, California has been selected by Restaurant Insider magazine as the top restaurant in the world on two occasions and has been among the magazine’s top four restaurants in the world in each of the past five years. Keller and his restaurant have earned multiple James Beard Foundation awards as well as a five-star rating from the Mobil Guide and a three-star designation from the Michelin Guide.  The list of credits reaped by Keller and his restaurant would fill a book.

What differentiates Keller from the rest are lofty and uncompromising standards that he applies to all facets of the dining experience.  Ingredient selection is painstakingly meticulous, a quest for the embodiment of perfection. Preparation of each and every meal–the assemblage of ingredients into exquisite composites–is an art form and a perfectly synchronized ballet in one.  It is the pursuit of perfection being achieved and the essence of purity at its most elegant.  Keller is known to be passionate about crafting the most inclusive dining experience possible for each and every dining customer.  His goal is that every customer be elevated to new heights of rapturous bliss. From all indications, he has succeeded.

Why then, I wondered, would a veritable gastronomic god, a tower of refinement and class condescend to launch a restaurant in the Gomorrah of crass commercialism, already a denizen of the über chefs. Chef Keller did not sell out when he opened Bouchon in 2005.  His restaurant is as far removed from the notion that it’s in Las Vegas that it may as well not be.  Bouchon is ensconced in a seemingly clandestine alcove atop the Venezia tower, far away from the maddening throngs of buffet chasers, slot machines and the choking haze of cigarette smoke.  It’s the genuine needle in the fiberglass haystack that is Vegas Boulevard. From the enclosed car park, you have to travel via two separate elevators just to locate the tenth floor location in which the restaurant is safely removed from the rabble.  Expect to ask for directions at least once.

Bouchon is opulent yet unpretentious.  It is classic and timeless in its beauty, a true culinary arena in which the master can ply his trade in his own inimitable style. The ambience is elegant and inviting.  A handcrafted pewter bar and its plethora of libations has earned Wine Spectator’s award of Excellence.  Top Napa Valley wineries bottle wines exclusively for Bouchon’s award-winning carafe program.  A raw seafood bar near the restaurant entrance features an impressive array of oysters-on-the-half-shell from both the west and east coasts.

Banquettes are a plush blue velvet, providing the ultimate in comfort for at least one diner at each linen cloth covered table.  The floors are intricately patterned mosaic tiles.  Antique light fixtures give the restaurant a bright and airy feeling. The outdoor patio has limited seating.  It overlooks lush, verdant gardens, spewing fountains and a swimming pool in which the beautiful people display more meet on the hoof than some of the restaurant’s entrees.

The kitchen, that hallowed ground in which the restaurant’s incomparable creativity is plated is one of the best-run, most organized kitchens I’ve ever seen.  Yes, I was fortunate enough to have been given a grand tour of the edifice in which edible extravagance originates. At any given time there are about sixty people working in the kitchen and its various stations.  It’s the Ratatouille staff times ten and all engaged in various feats of inspired and specialized culinary arts.  The bakery and prep station were equally busy.

The menu offers traditional French country fare reflecting Chef Keller’s emphasis on using the very best and most fresh seasonal ingredients.  We visited during brunch on the Saturday in which I celebrated having survived five decades on Mother Earth. The service at Bouchon also reflects Chef Keller’s high standards.  A tandem of attentive and very helpful waitresses were at our beck and call, offering advice when requested and answering all our questions. Our sole surprise is what passes for “business casual” at this stylish bistro.  Several diners were attired in far less (emphasis on less) than would pass as business casual at most businesses.  It wasn’t a distraction for us, only a surprise.

Brunch features an impressive array of pastries, breads, fruit and yogurt, all ala carte.  The Beignets du Jour, housemade spiced doughnuts with Bouchon Bakery jam, bear little resemblance to their counterparts at the New Orleans French Market coffee stand Cafe DuMond.  These are actually shaped like donuts.The beignets on the day of our visit were perfectly round, powdered-sugar-dusted donuts served with ramekins of peach and Nutella jam. Nutella is believed to be one of the best-selling sweet spreads in the world, yet it’s relatively unknown in America. It’s the classic taste combination of chocolate and hazelnut that seems to bring out the best of two complementary tastes. If freshness could be bottled, it might taste like the peach jam on the second ramekin. It tasted like ripe, fresh peaches right out of the tree.

I eschewed traditional brunch entrees to see what Bouchon could do with seafood and was thoroughly pleased with the Petit Plateau, a platter overflowing with the bounties of the sea: a half-lobster, nine oysters, three shrimp, three clams and six mussels.  A larger Grand Pateau at twice the price and quantity was also available. The Petit Plateau was accompanied by four ramekins, two of which included ameliorants (horseradish and a mustard-mayonnaise sauce) to the cocktail and wine-based sauces.  The oysters needed absolutely no help so the additives went unused.

A dollop of cocktail sauce and a squeeze of lemon is all the oysters needed to preserve and enhance their natural briny essence.  Each oyster was grit-free though a fellow at the next table swears he found a small pearl in one of his oysters. These were among the most fresh and clean oysters I’ve ever had.  Alas, in my feeding frenzy I must have consumed the note paper in which our waitress wrote down what types of oysters and clams we had.

Nothing goes as well with cold seafood as cold soup.  The special of the day was a chilled watercress soup the color of kryptonite.  A dollop of sweet garlic Crème fraîche and some seasoning were the only additives.  This was watercress soup as pure as it comes–and it was delicious. Cold soup is not for everybody, but dissenters might change their mind with one slurp of this intensely flavorful soup.  It is thicker than conventional broth, but also more fresh-tasting and lively.

My Kim opted for more traditional brunch fare, a pork skirt steak, eggs and fried potatoes.  The steak was perfectly grilled and at medium, was as moist and tender as any steak.  A subtle marinade with equal pronouncements of sweet and savory elevated the steak to near greatness. Greatness is an attribute not often ascribed to fried potatoes, but the silver dollar sized, wafer thin fried potatoes at Bouchon are unlike most fried potatoes. Reflect on the best fried potatoes you’ve ever had and these will kick sand on them. They are so perfect that you can actually stab them with a fork and pick them up without them disintegrating. They are so perfect, they’ll distract you from the flavors of the skirt steak. They are simply inspired. If Keller’s kitchen can do this with potatoes, they earn all the accolades bestowed upon them.

Dessert options are plentiful and each as decadent as the other.  Our choice was a trio of Bouchons, small cupcake shaped brownies intensely flavored with fine chocolate and served with three premium ice creams: vanilla, mint-chocolate chip and chocolate.  Eve would have succumbed to temptation a second time if offered this dessert.

Bouchon certainly lived up to our lofty expectations.  It’s one of the two best restaurants in which we’ve dined since I started writing about our restaurant visits.  It’s so un-Vegas that stepping back into the garage elevators may leave you in a state of depression.

We did not have the great fortune to meet Chef Keller during this visit but were assured that he is a frequent visitor and not just a larger-than-life celebrity who lent his name to a money pit.  Maybe next time.