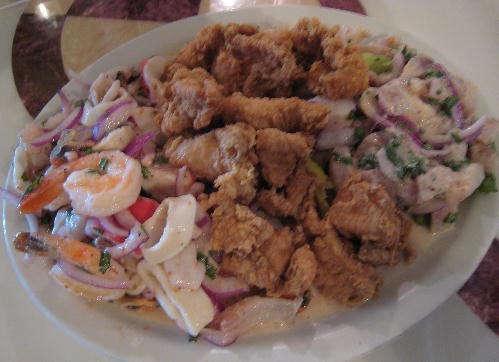 Americans spent several billion dollars a year on products touting their ability to provide fresh breath.  Ultrabrite toothpaste promises to “give your mouth sex appeal” while Colgate’s Oxygen toothpaste’s slogan is “Pure, Fresh, Clean.”  Fresh breath is so important to our culture that we even insist our pets have it. Milk Bone Dog Biscuits pledge to “freshen breath naturally” so of course, we buy that product in bulk for our four-legged children.

Fresh breath, it seems, translates (at least on humans) to a “cool, minty sensation with no mediciny taste” if commercials are to be believed. It’s unlikely dogs would appreciate having minty breath, preferring instead something smelling with the aroma of rotted carcass.  So why this digression into the emphasis our culture places on fresh breath when this is supposed to be a review of a Peruvian restaurant in Las Vegas, Nevada. The answer can be found in one word–ceviche.

The ceviche at the Paradise Grill is so fresh and invigorating that it will impart upon your mouth, a sensation of freshness that may last for hours. I’ve had ceviche on three continents and it has varied in quality and memorability. None has impressed itself on my taste buds as effectively or for as long as the ceviche at this relatively obscure restaurant. My Kim said it best for both of us, “this is the best ceviche I’ve ever had.”

The Paradise Grill is one of about a half dozen Peruvian restaurants in Las Vegas, a city which about 5,000 Peruvians call home. It is situated about seven miles from the famous Las Vegas strip.

The combination lounge and restaurant celebrates several aspects of the coastal nation’s culture. Our Lady of Guadalupe, the patron saint of the Americas and other Catholic images is an integral part of the decor. So, too, are woven tapestries, depicting both intricate Andean designs and Peruvian symbols such as the llama, an animal as essential to the nation today as it was during the days of the Incan empire.

Seat yourself in the wrong spot and the competition for your eyeballs and ears could be distracting. Two large flat screen televisions, both tuned to different Peruvian television programming, may provide a sense of modern culture in Peru, but they can also become unnerving. This was the sole aspect of the dining experience we didn’t like.

The Paradise Grill offers both Peruvian and Mexican cuisine, perhaps out of necessity because as good as this restaurant is, it does not appear to be heavily patronized–at least during lunch. In the evenings, the restaurant’s frontage becomes a thriving taqueria visited by throngs of taco fans. “The best tacos in Las Vegas,” we were told.

The papa a la Huancaina, a boiled potato served with a Peruvian cheese sauce, is a cold starter served on a bed of lettuce leaves. The potatoes are covered in a creamy and spicy (as in piquant) sauce made with fresh, country-style cheese and aji-amarillo, a yellow chili pepper with a distinctive fruity flavor.

A variation of the papa a la Huancaina is supposedly served in almost every Peruvian restaurant in the world. It’s easy to see why. The dish bears some similarities to the good old fashioned American potato salad and it even includes a garnish of hard-boiled eggs and olives. It’s a terrific way to start a meal.

The true Peruvian potato salad is the Causa de Pollo, a dish served warm and layered with the seemingly omnipresent ingredients in Peruvian cooking: potatoes, corn and chicken. This dish is a patty made from mashed potato stuffed with shredded chicken, mixed vegetables, mayonnaise and avocado. This is a moist and savory dish with the chicken being so finely shredded that its texture melds into an indistinguishable coalescence with the mashed potatoes.

The multi-page menu has so many thematic elements that it’s difficult to narrow your choices down. Will it be seafood, poultry, beef or a combination of the three? The accommodating wait staff is more than happy to create a combination to suit you. My recommendation is for a combination plate with at least two different ceviches and perhaps a chicarrone entree.

Peruvian chicharonnes are wholly unlike the New Mexican crackling pork variety and even a wider departure from the tripe version of chicharonnes served at some Mexican restaurants. At the Paradise Grill, the chicharonnes include not only pork, beef and poultry, but several different types of seafood.

The chicharonnes de pollo (chicken) are deep-fried into strips and are reminiscent of the chicken fingers served at many American restaurants, only much better. The chicken is moist and delicious, seasoned on the spicy side. I can’t recall ever having better “chicken strips” anywhere.

We were besotted with the ceviche de mariscos even before first tasting it. Large calamari ringlets; plump, sweet shrimp; chunks of real crab; sumptuous squid and a multitude of mussels were served with cilantro and red onions in a very generous portion. The mariscos are marinated in a citrus bath which imparts a clean and fresh taste then they are invigorated with rocoto, a Peruvian chili with both an incendiary heat and a fruity freshness.

Wow! If freshness had a taste, it would be like this ceviche. Every bit of the seafood seemed as fresh as the moment it was plucked out of the salty waters. The calamari was perfectly prepared and had none of the rubbery texture so common in poorly prepared calamari. The shrimp had the snap of freshness.

By itself, the seafood would have provided an explosion of sweet, briny and savory tastes and textures that spell freshness, but with the rocoto imbued citrus marinade, the seafood resoundingly embodied freshness. That freshness, that flavor stayed with us for hours after our meal. All ceviche should taste like this!

The ceviche de pescado features a firm-fleshed white fish which doesn’t disintegrate as inferior fish is apt to do. The fish is cut into larger pieces than we’re used to with Mexican ceviche. It, too, epitomizes the essence of freshness.

I don’t know if it’s possible to create a toothpaste or mouthwash with the flavor of the Paradise Grill’s ceviche, but if it were possible, I’d certainly use it. I could certainly use a bit more sex appeal.