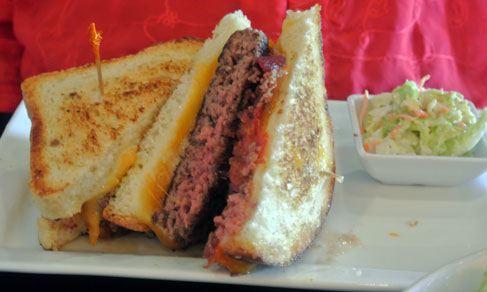 On Friday, March 19th, 2010 and to surprisingly little fanfare, a locally owned and operated burger restaurant by the name of Five Star Burgers launched in Albuquerque’s North Towne Plaza at Academy and Wyoming. Its opening predated by about a week, the launch of a similarly named burger establishment, an east coast based interloper named Five Guys which has exploded across the country with nearly 600 locations in 39 states. The latter opening was greeted with ruffles and flourishes, pomp and circumstance and throngs of curiosity-seekers and “chain gangs.”

Despite the relative lack of hype and brouhaha, Five Star Burgers won’t play second-fiddle to any burger restaurant. The name on the marquee will tell you that. That name is bold and maybe more than a bit audacious; some might say it borders on braggadocio. Five-star, after all, is a term used to denote the highest quality, something that is incomparable and absolutely without peer. In a rating system of one to five stars, it signifies the pinnacle, the top, the very best. My friends in Taos tell me the name fits.

Taos is where owner Bob Gontram founded his first of five planned Five Star Burgers restaurants. The historical “Soul of the Southwest” and Bohemian haven is a tough restaurant town. A burger restaurant would have to be pretty good to make it in Taos. With a pedigree that includes creating more than a hundred restaurants as both a franchisor and franchisee, Grantham has the experience and vision to succeed even in tough markets.

Discerning that trends are leaning ever more toward healthy dining, Gontram opted not to launch another copycat burger restaurant serving machine processed burgers from suspect feedlots. Instead, his Five Star Burgers menu features all natural, antibiotic free 100 percent Angus beef from Harris Ranch, world-famous producer of superb quality beef and exemplar of “ranch to the table” beef production. Five Star Burgers is trans-fat free and environmentally conscious; even its packaging is biodegradable, made from corn and recycled paper.

The name on the menu may say “burgers,” but burgers are not, as a hard and fast, intractable rule, synonymous with fast food. If anything, Gontram has simultaneously slowed down and upscaled the concept of fast food. He does more to defeat the stereotype of burgers being unhealthy and greasy than perhaps any other burger restaurant in Albuquerque. If the menu alone doesn’t tell you this is no run-of-the-mill burger joint, it will be very obvious this is no “gobble and go” fast-food emporium when you don’t see a drive-up window anywhere in sight. In fact, you’re more apt to saunter into the restaurant than to make a mad dash from your car. That’s the pace at which the restaurant operates.

When you walk in, you’ll be amiably greeted and escorted to your table where you’ll be presented a well-organized menu. Take in the swanky digs. The ambiance is elegant in a neo-modern way with ebony ceilings and stark tri-colored walls. Seating is utilitarian and comfortable and includes a bar complete with high-back stools from where you can order beer or wine An attentive wait staff will check up on you frequently, but not to the point where it becomes a nuisance. Your first visit should be for a burger.

The beef is fresh ground daily and char-grilled to order with an intriguing selection of condiments to adorn each burger. Burgers are served on a toasted brioche bun from Fano Bread Bakery, an Albuquerque institution. Adkins devotees can opt instead for a 12-ounce Harris Ranch hamburger steak sans bun, char-grilled to order with Gorgonzola cream and caramelized onions. A char-grilled Asian glazed salmon with grilled vegetables is also available and you can also substitute an all natural chicken breast for any burger.

When USA Today proclaimed Five Star’s green chile cheeseburger as New Mexico’s best green chile cheeseburger, it wasn’t some nameless, faceless writer in New York City making that audacious claim. The burger was recommended by Sally Moore, author of Culinary New Mexico, “the ultimate food lover’s guide” and one of my most trusted sources for information on New Mexico’s specialty food stores, cooking classes, wineries, bakeries, tortilla makers, food festivals and restaurants. It would have been easy for Sally to recommend one of the “usual suspects,” but in recommending a burger proffered by a relative newcomer, she was as bold as the burger she recommended.

This formidable line-up can be ameliorated by a number of flavorful toppings: aged Cheddar, American cheese, pepper jack, Swiss, Gorgonzola, smoked Provolone, avocado, roasted sweet pepper, crispy green chile, caramelized onions, wild mushrooms and crispy applewood bacon, all available for a dollar a piece. At Five Star Burgers, you truly can have your burger your way!

Aside from the side Caesar salad, available extras include French fries, sweet potato fries, a mixed “cart” of fries, a half order of fries, coleslaw and green chile on any menu item. To wash it all down, you can opt for Pepsi products or fresh-squeezed lemonade, black leaf iced tea, raspberry iced tea, organic free trade coffee or shakes (chocolate, vanilla or strawberry) made with all-natural Breyer’s ice cream.

7 June 2014: The shakes are thick and delicious, made with real ice cream cold enough to give you “brain freeze” (an ice cream headache), but so good you won’t want to stop. Dreyer’s ice cream is renown for its slow-churned process which makes it more rich and creamy than other ice creams. The chocolate is chocolatey and velvety smooth, like a premium semi-frozen chocolate milk. Alas, the salted caramel is somewhat cloying with little of the salt influence discernible.

About a quarter century ago, my very favorite burger restaurant in Albuquerque was a tiny hovel on Cornell near the University of New Mexico. It was called the Sheepherder’s Cafe and the specialty of the house was a lamb burger with green chile. The closure of this unique student favorite was a heart-breaker. While a few other restaurants have offered a facsimile of the lamb burgers I so enjoyed, none approached the quality of the Sheepherder’s Cafe. That is, until Five Star Burgers.

21 March 2010: A mix-up in the kitchen resulted in a lamb burger with applewood smoked bacon, green chile, Gorgonzola and caramelized onions in addition to the standard tomato, lettuce and mayo. It’s the way I’ll order all my lamb burgers in the future. Five Star’s lamb is subtle and rich, not gamey in the least. Prepared at medium, its inside glowed with pink pulchritude. The applewood smoked bacon is chopped, not unlike bacon bits. The caramelized onions are a sweet contrast to the plucky Gorgonzola. This is a five-star burger in every regard.

21 March 2010: We adorned our Five Star burger, too, adding tomato relish and caramelized onions to the standard offerings of gorgonzola cheese and applewood smoked bacon. The contrast of sweet and savory toppings makes for an interesting flavor combination, a coalescence of deliciousness. The tomato relish is so good you might want to spoon it up.

2 October 2010: October, 2010’s burger of the month, hopefully a burger which will make Five Star’s menu, is yet another celebration of excellent beef ameliorated by complementary ingredients. The A1 Burger showcases an eight-ounce beef patty with A1 sauce brushed on both sides then topped with Cheddar cheese and fried onion straws on a toasted brioche bun. A national chain has a similar burger, but it’s not executed nearly as well. As with other Five Star burgers, this is a juicy and delicious burger, one for which a bib might be advisable.

7 June 2014: Five Star’s Burger of the Month for June, 2014 transported me back to South Carolina where my love of pimento cheese (a mix of grated cheddar, mayonnaise and diced pimiento peppers) was rekindled. Five Star paired pimento cheese with applewood smoked bacon to create one of the most intriguing and delicious burgers in town. Pimento cheese is a working person’s cheese, a cheese with personality courtesy of the beauteous pimento, a red cherry pepper with sweet flavor and very mild heat (100-500 Scoville units). Then, of course, there’s applewood smoked bacon at its salty, crispy and smoky best. Together they make an unbeatable combination.

7 June 2014: Five Star has even managed to elevate the humble and oft boring grilled cheese sandwich into something spectacular. A triumvirate of cheese–Cheddar, Swiss, Provolone–paired with bacon and tomato marmalade on sourdough on its own makes for a three- or four-star sandwich. Add a Harris Beef Angus beef patty and you’ve got a somewhat subdued, but quite delicious version of a patty melt. With rye bread this sandwich would have the more assertive personality which would make this a true, even more memorable patty melt.

7 June 2014: Every once in a while, everyone should eschew French fries, onion rings and that ilk and opt instead for a salad. Salads go better with burgers than you might believe. Order a salad for two and the Five Star crew will split it for you. The Shanghai Chicken Salad (Asian and field greens, almonds, green onions, water chestnuts, crispy won ton noodles, sprouts, sesame seeds and a Thai peanut dressing is a very good bet, especially if you ask for extra Thai peanut dressing. The ingredients are fresh and crispy and the flavor profile is varied–sweet, savory and tangy.

21 March 2010: You’ll want a mixed cart of fries with your burgers. A mix of standard French fries and sweet potato fries served on a fine mesh colander basket with butcher paper atop, they go especially well with Five Star’s unique green chile mayo (all chile used by the restaurant is Hatch chile).

2 October 2010: Better yet, order the fried green bean appetizer served with green chile mayo. I first experienced fried green beans at a Vietnamese restaurant in Chandler, Arizona several years ago and have craved them since. Five Star has sated my cravings with some of the most tasty green beans in memory. Sheathed in a light batter, the beans have a snappy crunch while retaining the freshness and moistness of the green beans. Dip them into the accompanying green chile mayo for an even better adventure.