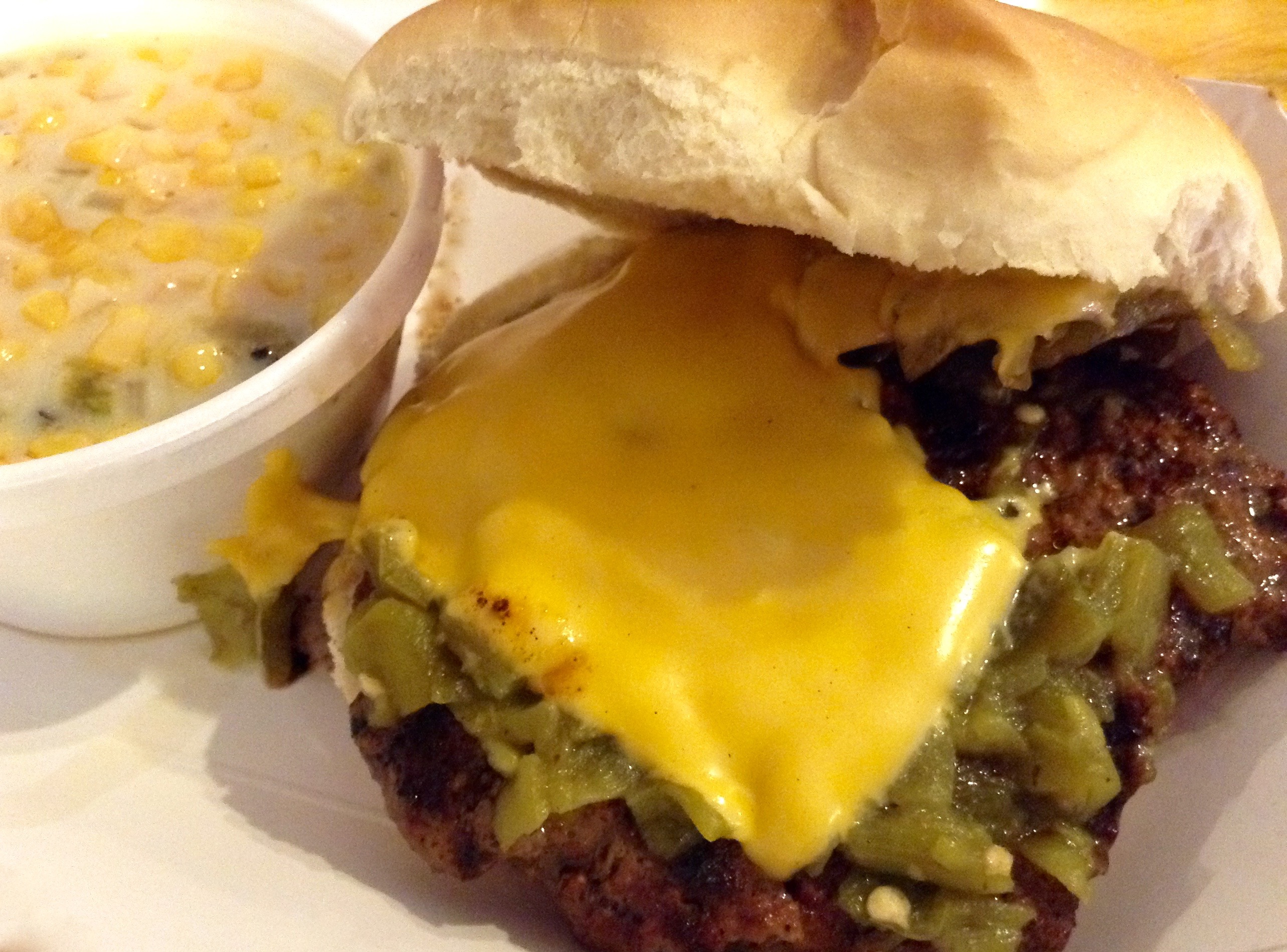 New Mexico’s Green Chile Cheeseburger Trail not only celebrates one of the Land of Enchantment’s most iconic foods, it showcases the restaurants, drive-ins, diners, dives, joints, cafes, roadside stands and bowling alleys which prepare our ubiquitous, incomparable green chile cheeseburger.  To New Mexicans, there is nothing as thoroughly soul-satisfying and utterly delicious! What elevates a burger from the ordinary to the extraordinary is taste bud awakening, tongue tingling, olfactory arousing green chile, New Mexico’s official state vegetable (even though it’s technically a fruit).  In the continually evolving mosaic that describes New Mexico’s cultural intermingling, one constant is green chile, an essential ingredient in many of our recipes and THE centerpiece of any outstanding green chile cheeseburger.  Even such corporate megaliths as McDonald’s and Sonic try their hand at the green chile cheeseburger.

It stands to reason that one of, if not THE very best green chile cheeseburger in the Land of Enchantment would be served in Hatch, the undisputed epicenter of New Mexico’s chile production.  Widely regarded as the “chile capital of the world,” the village’s population of around 1,200 citizens increases by twenty times as people from all over the world converge for its annual chile festival.  It’s a chile addict’s paradise, a celebration of chile in the milieu in which it is grown.

Every other day, locals and visitors alike converge at Sparky’s Burgers, Barbecue & More, one of the most colorful restaurants in the state as well as one of its best purveyors of both green chile cheeseburgers and barbecue.  My friend Larry McGoldrick, the most prolific Urbanspoon contributor in New Mexico, is taking his educated palate on a quest to discover all the best of New Mexico’s cuisine says Sparky’s serves up “quite possibly the best Green Chile Cheeseburger you are likely to get anyplace.”

To get to Sparky’s, you’ll take Exit 41 off Interstate 25, one of the most interesting and colorful stretches of highway in the state.  After crossing the murky and meandering Rio Grande, you’ll start to wonder if you’re in the Land of the Giants, the iconic fiberglass and concrete statues that were so prevalent along America’s highways and byways in the 1950s and 1960s.  This roadside art is part of the fabric of Americana, albeit a kitschy tradition that is fading with the passage of time (which aptly describes many of the statues themselves).

The epicenter of fiberglass statue land appears to be Franciscan RV, about a quarter of a mile in town.  A restored Muffler Man is the most prominent and prolific statue.  Holding a tiny model of a Winnebago RV in his upturned right hand, Muffler Man easily dwarfs other fiberglass statues in the fenced in complex. He’s much taller than any of the recreation vehicles in the complex, too.  The office area holds a veritable museum displaying everything from antique toys to old time jukeboxes and pianos.

Traverse about three-quarters of a mile further and you’ll be treated to even more fiberglass artwork on display.  On the south side of the street is an old-fashioned (circa 1962 or so) Chevrolet van with “Hatch Welcomes You” signage flanked on both sides by red and green chiles. Standing atop the van is a gigantic rooster, its chest puffed up like a bantam bodybuilder.

Directly across the street is the motherlode, a veritable village of fiberglass folk.  That’s where you’ll find Sparky’s Burgers, Barbecue & Espresso.  Nattily attired in his red, white and blue spangled outfit is Uncle Sam, as tall as Muffler Man.  On the building’s roof are the progenitors of the A&W Burger family, Mama Burger and Papa Burger, both holding a large frosted mug of A&W Root Beer.  At sidewalk level, Colonel Sanders sits on a bench conversing with Ronald McDonald.

Wading in a concrete pool is a strange metallic creature, a bucket of bolts, gears and sprockets fashioned into an anthropomorphic being with what appears to be washboard abs (a real metal washboard). This would be Sparky, the restaurant’s mascot. Picnic tables in front of the restaurant include an explanation of how you can contribute to Sparky’s college fund, a most worthy cause.

Though the college fund donation is whimsical in nature, there is a very worthy cause for which you might want your voice heard. Bureaucrats from the New Mexico state Department of Transportation have apparently decided that some of Sparky’s roadside attractions are not in compliance with the Beautification Act of 1965. State officials have attempted to force Sparky’s to remove a giant fiberglass pig on a trailer as well as humongous hot dog shaped sign on the side of the road. Even an exemption from the city of Hatch has failed to dissuade state officials wanting to flex their jurisdiction over New Mexico Highway 26 which runs through Hatch.

Waging the good fight for common sense and freedom of expression are Josie and Teako Nunn, the popular proprietors of Sparky’s.  This dynamic duo is living their dream and thrilling their customers on a daily basis.  Josie Nunn is the restaurant’s designer and chief barista.  She procures premium coffee, roasted locally by Ocotillo Roasters of Las Cruces and serves it in a milieu in which there’s something to see at every turn–even a gigantic moose head mounted on the main dining room wall.

The barista’s other half is the barbecue man, Teako Nunn, a very experienced practitioner of the low-and-slow disciplines.  A certified Kansas City Barbecue Society judge, Teako is usually seen tending to the large smoker behind the restaurant.  He patterns his barbecue after the barbecue in and around the hills of Austin, Texas where some of the nation’s best barbecue can be found.

The menu showcases Teako’s terrific barbecue.  The “Peoples Choice” is a three-quarter pound plate which includes four meats (pulled pork, brisket, sausage and one center-cut rib).  A half-pound plate includes one or two meats and two sides.   You can also opt to have your barbecue bounty on a sandwich or a half-pound of meat a la carte.  In any case, the barbecue is some of the very best in New Mexico.

The center-cut barbecue ribs are certainly in a class of their own with none of the annoying membrane that makes them difficult to eat nor any discernible fat save perhaps for just enough to flavor them optimally.  Fall-off-the-bone tender, the ribs are meaty and lightly smoked, the type of ribs of which you might want a dozen or more.  You can add sauce to taste if you desire, but it’s not needed.

The pulled pork is tender, flavorful, moist and as light as frost.  While some so-called barbecue experts can’t seem to infuse much flavor into their pork (and rely on cloying sauces to add that critical component–flavor), Sparky’s pulled pork is absolutely delicious, rich, complex and thoroughly addictive.  How good is Sparky’s barbecue?  Put it in the same class as the ‘cue at Sugar’s BBQ & Burgers in Embudo.  In other words, it’s among the very best barbecue in New Mexico.

The green chile cheeseburger is also in rarified company; it’s one of the three best of its genre in the state. Only the Bobcat Bite and the Buckhorn Tavern should even be mentioned in the same breath and Sparky’s green chile puts the chile in the other two to shame. This is green chile which will get your attention with its piquancy and its smokiness. It bites back and provides such a delicious endorphin rush, you’ll want another. The beef is hand-formed, hand-cut and hand-ground to a quarter-pound thickness and it’s prepared to your exacting degree of doneness. At medium, it’s absolutely perfect with a nice hint of pink and lots of juiciness.

When you place your order for a green chile cheeseburger, what will be called out to the line cooks is “one world famous.”  The burger is served naked–no lettuce, tomatoes, pickles or even mustard.  None of those are needed.  This “competition style” green chile cheeseburger includes only what is stated on its name.  For sheer purity and deliciousness, you don’t need anything else.  The beef patty is oversized, protruding well beyond the six-inch buns.  It’s a moist and delicious patty, as good as many steaks.  The green chile is the pride of Hatch, New Mexico, a glorious green with a piquancy that will get your attention, but also with a flavor that will remind you chile is a fruit.

Though its ambience is whimsical and fun, Sparky’s offers some wholly serious sides.  Don’t expect to find flaccid fries.  Sparky’s fries are thick and seasoned, perhaps double-fried to a golden, crispy hue on the outside and a delicious tenderness on the inside.  The pineapple coleslaw is reminiscent of the sensational slaw at the much-missed Independence Grill.  Finely chopped cabbage in a sweet salad cream punctuated by pineapple, it’s perfect accompaniment to both the barbecue and the green chile cheeseburger.

Perhaps the best of the sides is a bowl of green chile sweet creamed corn, large niblets of fresh corn swimming in a cream base infused with the incomparable flavor of green chile.  Wow!  Sweet and buttery, piquant and creamy, it’s the best corn you’ve had multiplied several times over.  Alas, only the seasoned beans fell short of the mark, thanks (you guessed it) to a cumin corruption.

Sparky’s green chile meat burrito is yet another surprise.  Instead of ground or shredded beef, a large tortilla is engorged with brisket and green chile, a combination that goes surprisingly well together.  The slightly smoky, slightly sweet brisket is tender and delicious especially when complemented by the fruity flavors of the green chile.  This is a hand-held treasure.

If espresso isn’t your thing, Sparky’s has a variety of thirst-slaking beverages available, including thick, cold milk shakes and homemade lemonade. The shakes are flavorful and teeth-rattling cold while the lemonade has just enough tanginess to pucker your lips.  If you like mixing sweet and piquant, you’ve got to try a mango and Guajillo shake.  Guajillo, a distinctive chile with a slightly fruity (berry) and piney flavor, is popular in salsas and soups as well as in Mexican mole. Melded with a mango flavored ice cream, it’s an adventure in taste contrasts.  Though it might not water your eyes with its piquancy, the Guajillo will certainly get your attention.

If you want to do as the locals do, order a green chile shake.  It’s essentially a vanilla shake with chopped green chile interspersed throughout.  The cold ice cream renders the green chile nearly frozen, changing the texture of the chile into a chewy, near Popsicle-like deliciousness.  Shakes, made with ice cream and milk, tend to be a good way to quell the piquancy of chile.  Ironically, the green chile on this shake is piquant enough to give you hiccups if you’re not a fire-eating New Mexican.  If for no other reason than to say “been there, done that,” everyone should try a green chile shake at least once.  Me, I liked it a lot and will have it each and every visit.

Sparky’s is all about small-town hospitality, outrageous fun and some of the very best barbecue and burgers in the Land of Enchantment.  An avowed Norteño, I may secede to the south just to be closer to this fun and fabulous restaurant.