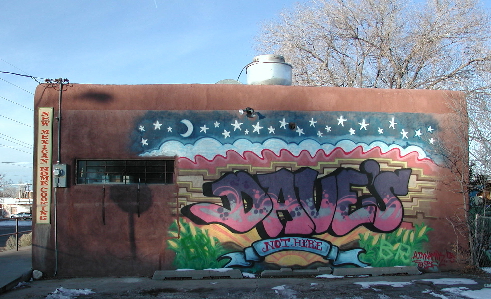 Dave’s not here. You really can’t blame him. After all, a Santa Fe district court judge issued (and later rescinded) a temporary restraining order alleging Dave (Letterman) had been tormenting a city resident for more than ten years by using coded words and signals to woo her on his television program.

A better theory than mine is posited by David “Whochacha” Pederson, who points out that the line “Dave’s not year” is used repeatedly in a hilarious Cheech and Chong routine you’ve got to listen to.

Wrong Daves? Maybe or maybe not. No one really seems to know for sure whom this quaint restaurant is named for. Theories abound, most speculating that the uniquely named neighborhood diner is whimsically named for an erstwhile proprietor who left town in a hurry.

Deadbeat dad? Ran afoul of the law? Someone must know, but not even the staff is saying.

What diners are saying is that Dave’s serves one of the very best green chile cheeseburgers in the Land of Enchantment, second in the City Different perhaps only to the Bobcat Bite burger (recognized by GQ magazine as one of the 20 best burgers in America).

Dave’s serves, in my humble opinion, one of the five best green chile cheeseburgers in the entire universe (not that I’ve tried them all).

Dave’s famous burger comes in two sizes–a regular 4.5-ounce burger and a large 9-ounce burger, either of which you can have prepared to your exacting specifications. The burger comes garnished with lettuce, tomato, onion and lettuce then it’s up to you to get creative.

Each table includes the standard condiments of mustard and ketchup, but also feature a gourmet mustard and several picante sauces.

Optional toppings (75 cents each) include a piquant green chile (served on the side), jalapenos, grilled onions (lightly grilled so that the thick onions taste like really good onion rings sans coating) or mushrooms, fresh guacamole and an alabaster colored white cheese.

The beef comes from Kaunes Market, a highly regarded local retailer. The beef is shaped into a ball then held in a plastic bucket until an order is placed. It is then shaped into a not quite round, not quite square patty that extends beyond the Frisbee-sized buns on which it is served. It takes a catcher’s mitt or two hands to hold the nine-ounce burger which is as juicy and flavorful as any burger in northern New Mexico.

Appetizers include one relleno with chile, nachos, fresh guacamole and chips and salsa and chips, but what you really want with your burger is a pile of Dave’s French fries. These hand-cut beauties are somewhat darker than your usual pasty-white fries and are lightly salted–perfect with or without ketchup.

An array of delectable desserts is available, too. These include carrot cake, apple pie, empanadas and a chocolate cake you’d walk across the desert for. A slab of chocolate cake would easily serve two, but it’s so good, you might not want to share it. Despite a quarter-inch thick frosting, the chocolate cake is not annoyingly cloying like one of those store-bought, tooth-decaying monstrosities.

Dave’s Not Here is delightfully, quintessentially Santa Fe, embodying the “City Different” attitude. The ambience is Hog Farm hippies meet the Santa Fe Art society. Two walls are dedicated to an exhibit of pensive photographs from Cuba and while the menu doesn’t include any Cuban entrees, salsa with a vibrant beat resounds from the restaurant’s speakers.

Dave’s isn’t necessarily easy to get to if you don’t know Santa Fe well. It’s off-the-beaten-path in a residential neighborhood, but once you’re on the right street headed in the right direction, you can’t miss it. The exterior walls are tagger graffiti meets art deco.