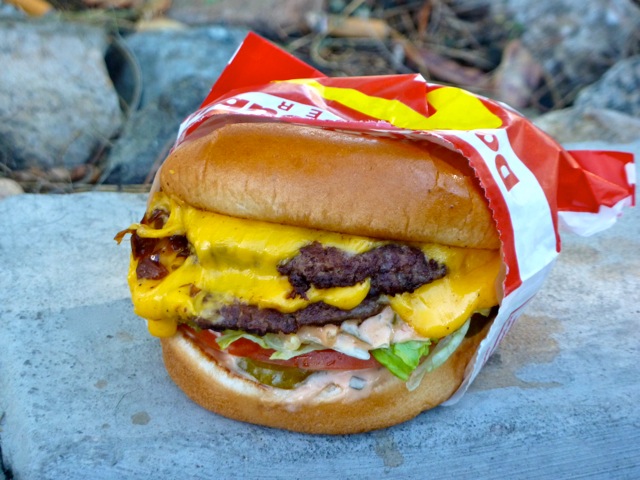 During a 2011 episode of Break the Chain, the enlightening and entertaining food-centric radio program hosted by the brilliant Ryan Scott, Larry McGoldrick, the professor with the pulchritudinous palate, made some rather unkind comments about Blake’s Lotaburger, an exclusively New Mexico institution.  I cautioned him that local listeners might show up at the radio station armed with pitchforks and torches. That’s how much New Mexicans love the burger franchise whose motto reminds them that “If you are what you eat, you are awesome.”

It’s not always easy to express your opinion about something as sacrosanct and beloved as Lotaburger, but inspired by Larry’s honesty, let me share my thoughts about In-N-Out Burger, a California institution that’s beloved beyond the Golden State, a burger restaurant National Geographic named the second best burger in the fruited plain in its “Top 10 Best of Everything” for 2012.  When it comes to In-N-Out, I’m most definitely in the minority.  I don’t get it at all…

I first found out about In-N-Out Burger in 1987 while developing psychometrics for the United States Air Force in San Antonio, Texas.  Two of my test-writing colleagues were native, In-N-Out Burger obsessed Californians who never seemed to take off their tee-shirts emblazoned with slogans for the popular California-based burger religion. They regaled me with tales that made the burgers almost too good to be true.

Our first close exposure of the third kind came in the millennium year during a visit to Las Vegas, Nevada. At first glance, the window sticker on the back of a low-rider was more advertising for In-N-Out Burger, but closer inspection revealed the logo had been modified. By removing the “B” and the “R” off the ends of “Burger,” clever innuendo resulted. It also prompted our first visit.  “Nice,” we thought, but “not nearly as good as Fatburger,” which had captured our taste buds with a fresh, made-to-order burger that seemed just too good to be made by a chain.  It was certainly not the transformative burger experience we expected, not even close.

We thought then and believe today that In-N-Out Burger’s product was inferior to Fatburger (and Tommy‘s, another Los Angeles favorite).  We questioned “is that all there is,” wondering what the hullabaloo was all about.  In-N-Out aficionados continue in their efforts to make a convert out of me, none more effusively than my sage  comadre Suzanne Devlin who’s got deep roots in New Mexico but now lives in Oregon.  Suzanne makes a great case:  “When an In-N-Out is served to you, the lettuce is crisp; the tomato covers the patty; the bun is grilled and toasted until it’s crisp in the fat of the cooked patty so the flavor is imbedded in the bun and the burgers in the photos and what little advertising they do is exactly what you get when you are served one at their restaurants not some smashed up burger that looks like Smokey the Bear sat on it.”

For me, it’s about flavor and that’s where In-N-Out Burger falls short of chains (Rally and Checkers, to name two) I have liked in the past…and even short of Lotaburger (green chile has a lot to do with that).  I don’t dislike In-N-Out and in fact, appreciate the freshness of its ingredients, its business model and ethical practices and much more.  There is much to like about In-N-Out, a family-owned enterprise since  1948 which is credited as the progenitor of the drive-through restaurant concept.

Although carhop-based drive-ins were fairly commonplace in California, In-N-Out Burger featured a two-way speaker box where you would place your order then drive up to pick it up. You’re in, you’re out…a function, not just a name. Fast Food Nation: The Dark Side of the All-American Meal commended In-N-Out Burger for using natural and fresh ingredients and for looking after the interests of employees regarding pay and benefits.  It’s the favorite chain for such hard-to-please chefs as Thomas Keller, Gordon Ramsey and Mario Batali.  Nationally syndicated sports talk show icon Jim Rome says when he’s away from California for more than two days, the first restaurant he visits upon his return is In-N-Out.  Obviously, I’m the sane one; everyone else is nuts.

In-N-Out Burger’s menu is as simple as they come with three burgers, French fries, shakes, sodas, coffee and milk. There are no salads, sandwiches, breakfasts or chicken. Over the years, aficionados have also developed a unique lexicon for unpublished burger configurations. That lexicon is based on a numbering system that defines the number of beef patties and slices of cheese you want on your burger. A 3X3 is a three-patty burger with three slices of cheese. According to urban legend, a skyscraper-sized 20X20 has been created.

Aside from cheese, all In-N-Out burgers officially on the menu come with a special sauce (similar to the sauce on the Big Mac but not quite as messy and profuse), onions, lettuce, and bun.  The burger patties are unfailingly hot and juicy which means the cheese becomes a gooey mess. Adkins dieters order their burgers “Protein-style” which means no bun and patties wrapped in a lettuce leaf.

What really stands out at In-N-Out are the French fries which are crispy on the outside and light on the inside. They’re well salted and delicious, a definite improvement to the flaccid, boring fries of other chain burger restaurants. Milk shakes are creamy and smooth, but taste-wise, nothing special.

In-N-Out Burger is special to Californians and has achieved significant popularity in Nevada, Arizona, Utah and Texas.  There’s no doubt this mega-popular chain would fare very well in chain-loving New Mexico even without green chile.