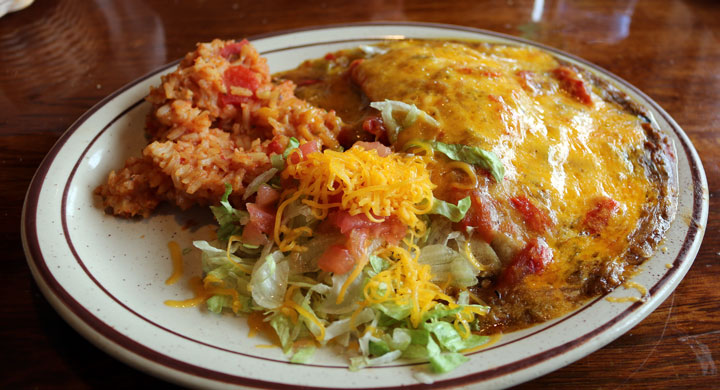 In 2009, James Beard Award-winning food journalists Jane and Michael Stern published a terrific tome entitled 500 Things to Eat Before It’s Too Late. Despite the ominous (some might say fatalistic) name, the book is actually a celebration of the best dishes that are unique to this country. The Sterns, who have been focusing on quirky All-American food haunts since 1977, describe in delicious detail, the best dishes proffered at roadside stands, cafes, street carts throughout the fruited plain.

In an interview with the Wall Street Journal, Michael Stern was asked if the inclusion of the words “too late” in the book’s title referred to the “death of the small eatery, or the reader’s impending doom from eating too much fried chicken, French fries and fried fish.” He indicated he was referring to “the impending onslaught of the nutrition police who will make all of this stuff illegal one of these days.” He also warned of the loss of “some variety and some local specialties that were once easy to find and are now hard or impossible to find due to chain restaurants.”

Despite the onslaught of the ubiquitous national food chain, Stern was optimistic that “Americans have become more conscious about regional food,” which in his experience was once thought to be limited to fried chicken and hot dogs. He praised the “rebirth of interest in regional food that parallels its diminution because of franchises.”

New Mexicans should be duly proud at how well represented our cuisine is among the 500 uniquely American foods celebrated in the book. By the same token, as I’ve often railed about on this blog, if we don’t patronize the mom and pop restaurants who prepare these authentic time-tested treasures, all we will be left with is the chain restaurants and their homogeneous cardboard tasting food, superficial flamboyance and saccharin service.

Unlike on their previous Roadfood books, the Sterns actually rank what they consider the “best of the best” among the foods described. Understandably, when a book is published which encompasses the length and breadth of the United States, omissions are bound to occur. Still, for the most part, the Sterns do a wonderful job of winnowing out the premium wheat from a prize crop, highlighting those restaurants which provide unforgettable dining experiences in their natural setting prepared by locals who still do it in the traditional ways.

Most New Mexicans would probably agree with at least one restaurant named in that hallowed list. My own “hot list,” for example, would rank Mary & Tito’s Cafe as the standard-bearer, but would also include the carne adovada at Cecilia’s Cafe, The Burrito Lady and Duran’s Central Pharmacy in Albuquerque as well as The Shed in Santa Fe and the aforementioned Rancho de Chimayo.

One restaurant climbing toward my hot list is Papa Felipe’s, an astute listing by the Sterns who observed that “an unusual version is served at Papa Felipe’s Mexican Restaurant…where the pork is sopped with a marinade of green chiles, giving it a unique vegetable potency. It’s great as a green tamale pie, baked in sweet corn masa and laced with cheese.”

Green chile carne adovada is indeed a unique spin on a New Mexico standard, and to the best of my knowledge, Papa Felipe’s is the only restaurant in Albuquerque, if not the entire state, to feature it. When you stop to think about it, why not green chile carne adovada. The preparation process is the same–marinating chunks of pork in chile. Papa Felipe’s uses a blend of chopped green chile from Bueno Foods (a New Mexico institution since 1946) as well as the fat, elongated chiles they use for chile rellenos. The marinading process takes about three hours. The results will impress themselves on your taste buds for much longer.

Papa Felipe’s Mexican Restaurant & Lounge has been pleasing Albuquerque palates for more than 30 years with chef Larry Gonzales at the helm for most of that time. As with several restaurants in the Land of Enchantment, it straddles the sometimes ambiguous demarcation between New Mexican food and Mexican food and in fact, serves cuisine unique to and shared by both (often the sole distinction being the degree of heat). Some of the very best items on the menu are those with which Chef Gonzales has taken liberties and those he’s essentially invented.

From an experiential perspective, Papa Felipe’s has the look and feel of a Mexican restaurant that belies the New Mexico style stucco exterior. The interior features a combination of whitewash and stucco colored walls with faux adobe half-walls separating the main dining room. A mural of what appears to be a Mexican village is painted on one wall. A surprisingly good house stereo system pipes in Mexican standards by the great crooners of yesteryear and today. Seating is comfortable and plush.

A full bar serves a wide variety of domestic and Mexican beers and a selection of house wines as well as what is reputed to be “the meanest margarita in town.” One of the more popular margaritas is named for New Mexico’s legendary Dixon apple. Additionally, Papa Felipe’s offers full-service catering, drop-off catering and pick-up services.

The wait staff is prompt with complementary chips and salsa. The chips are lightly salted and thin. The salsa, which is sold online internationally, is also lightly salted. It is a jalapeno-based salsa which according to the Web site is made from “the finest ingredients combined with secret spices.” It’s not an especially piquant salsa and has a pureed texture like a tomato paste, but it very much tastes like New Mexico.

26 February 2017: One of chef Gonzales’s unique creations, the Botana Crispeante has an “east meets west” feel to it. The menu describes this appetizer as “spicy beef, chicken or carne adovada filling (or a combination of the three), crisp fried as a chimipiqueño.” Chimipiqueño appears to be a diminutive version of a chimichanga, a deep-fried burrito. The Botana Crispeante features of these six bite-sized miniature burritos which might remind you more of miniature egg rolls with unique New Mexico touches.

The Botana Crispeante is served with chile con queso and guacamole, both of which are quite good. The chile con queso is creamy and delicious, thick enough not to run off your chips but not so gloppy that it breaks the brittle chips. The guacamole showcases the flavor of fresh avocados seasoned with garlic. Both complement the deep-fried mini burritos very well. If for no other reason than their uniqueness, this is an appetizer you should try. The fact that they’re quite good is a bonus.

28 July 2013: While several Duke City restaurants serve excellent renditions of caldo de res, the hearty, satisfying beef soup, not as many restaurants offer caldo de albondigas, another Mexican comfort food favorite often referred to as “Mexican soul food.” Moorish in origin, Caldo de Albondigas was integrated into Spanish culinary tradition when Spanish King Ferdinand and Queen Isabella conquered the region occupied by the Moors. Albondigas made their way to Mexico with the conquistadores where the dish has flourished into iconic status. Papa Felipe’s version is a soul-warming and delicious bowl of hearty goodness with a generous number of meatballs swimming in a savory 16-ounce broth with perfectly prepared carrots, celery, onions, tomatoes and squash. The meatballs are terrific, so good you’ll want a dozen or so.

26 February 2017: As for the green tamale pie which Jane and Michael Stern praised so highly, that praise is well warranted. Succulent carne adovada is baked in a sweet corn masa with bits of vegetables, green chile and a touch of onion set of with a liberal lacing of melted yellow Cheddar cheese and green chile. The star is definitely the green chile carne adovada which is as tender as any we’ve had in Albuquerque, but with the pronounced flavor and aroma of green chile. Your taste buds might be confused at first bite, but they’ll quickly get over it and will enjoy this dish immensely. It’s a winner–truly one of the best 500 things to eat in America and a contender for my carne adovada “hot list.”

26 February 2017: Traditionalists who love their carne adovada red can have that, too. One of the best ways is in Papa Felipe’s Chilaquile Casserole, a brimming bowlful of joy (think Beethoven’s Fifth at every bite). This entree is layer upon layer of luscious carne adovada (red), melted yellow Cheddar cheese, spicy green peppers, sweet corn, and tostadas smothered in red chile. The casserole is baked to perfection then topped with even more cheese, chile and garnish. This entree includes a flour tortilla and a side of guacamole (among the very best in New Mexico). Only with a fried egg can this dish be improved upon.

28 July 2013: Although Papa Felipe’s isn’t open for breakfast, it does offer one of the very best–and certainly one of the largest–breakfast burritos in Albuquerque. The aptly named Big Papa Breakfast Burrito is constructed from a giant flour tortilla engorged with three scrambled eggs, Papa’s potatoes, carne adovada (marinated in your choice of red or green chile) and Cheddar Jack cheese topped with your choice of chile and more Cheddar Jack cheese. Both the red and green chile are exemplars of New Mexico’s official state vegetable with plenty of piquancy and flavor. Not every diner will be able to finish this behemoth of a burrito.

26 February 2017: Papa Felipe’s offers three styles of tacos: a traditional crisp fried corn tortilla filled with beef or chicken, the Fiesta Style Taco (two flour tortillas filled with marinated beef strips sautéed with onions, peppers, avocado and tomatoes, garnished with sour cream and pico de gallo) and a Puffy Taco (a large sopaipilla shell filled with chicken that has been marinated with salsa). The Fiesta Taco will remind you of fajitas which stands to reason the ingredients from which it’s constructed can also be found on fajitas. The marinated beef strips are of prime steak quality.

28 July 2013: Another entree as good for breakfast as it is for lunch or dinner is the Mexican skillet, a sizzling skillet filled with papitas, carne adovada, and two eggs any style. The papitas aren’t fried in the style of French fries as so many papitas tend to be. Try this dish with the green marinated chile carne adovada for a different take on the dish. This entree is served with one side and a flour tortilla.

In its annual Food & Wine issue for 2012, Albuquerque The Magazine awarded Papa Felipe’s New Mexican Restaurant a Hot Plate Award signifying the selection of its Camarones Victor as one of the “most interesting, special and tasty dishes around.” Considering the thousands of potential selections, to be singled out is quite an honor.

In April, 2016, Papa Felipe’s was one of four Duke City restaurants (along with Tia B’s La Waffleria, Laguna Burger and Rebel Donut) featured on the Cooking Channel. In an episode entitled “Cheap Eats,” host and food blogger Ali Khan had dinner at Papa Felipe’s where he enjoyed a sopaipilla stuffed with carne adovada. Papa Felipe’s was selected because of its unusual take on New Mexican food.

Papa Felipe’s is one of those rare restaurants which defies paradigms and dares to be different with such inventive entrees as carne adovada made with green chile, entrees which are too good to be on any endangered list. Just in case, make sure you try them before it’s too late.