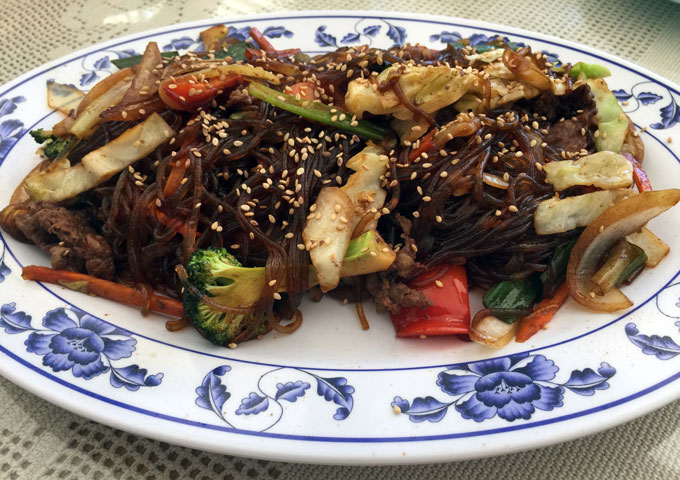 “Cuisine is the tactile connection we have to breathing history.
History and culture offer us a vibrant living society that we taste through cuisine.
All cuisine is a reflection of the society from which it emanates …
in the end cuisine is the result of culture”
– Clifford Wright

If cuisine is the result of culture, then it can certainly be stated that music is the expressive language of that culture. Well before the advent of the written word, music was used to tell stories, impart wisdom, express ideas, share emotions and convey the history and culture of the civilization. Until the 20th century and the rapid cultural changes wrought by the postmodern period, music also bridged the generations. Family members of every generation typically listened to the same music.

In Korea, there may be no song as beloved–even in North Korea–as Arirang, an iconic folk song often considered an unofficial national anthem. Its plaintiff lyrics convey a traveler’s agony and anguish while crossing a mountain pass named Arirang with a heartfelt longing to return home. After its service in Korea during the Korean War, the South Korean government designated Arirang as the official march of the United States Army’s 7th Infantry Division in which my father-in-law served.

Because of the deep emotional ties to the song, it’s only fitting that Albuquerque’s premier (but surprisingly not the only one) Korean market be named Arirang. Serving the Duke City for more than a decade, the Arirang Oriental Market proffers specialty groceries, pots and pans, rice cookers, cooking utensils, perfumes, lotions and unique collectibles. It’s an adventure and a joy to walk the market’s aisles, peruse the labels and contemplate the purchase of ingredients for a soiree of adventurous dining. The geriatrically advanced among us may even reflect on the days in which the edifice was a Burger Chef restaurant.

At the back of the market is an area almost too small to call a restaurant, but which serves some of the very best and most authentic Korean food in the Duke City. A few tables and a counter constitute the eatery’s entire seating. It could be argued the eatery is devoid of ambiance, but if you look beyond the stark walls and utilitarian surroundings, there is much to see. Leaning against a wall on the counter is the Arirang menu, written entirely in Hangul, the Korean alphabet. A laminated menu includes translations for the linguistically challenged among us. English is a second language to the wait staff, but it’s not too difficult to get your point across and get your questions answered. The wait staff is unfailingly polite.

Befitting the eatery’s Lilliputian capacity, the menu is relatively small but also surprisingly ambitious considering its diversity. A small glass of tea (a surprising contrast to the 64-ounce behemoths served at fast food joints) is delivered to your table shortly after you’re seated. A refrigerated case in an aisle hugging the wall includes soft drinks, both the American standards and a few carbonated Korean offerings. We’ve established that decor is not a strong point, but aroma and food are.

There are only a few appetizers on the menu, the most popular being traditional Mandu, Korean dumplings. In that Mandu are a Lunar New Year family tradition throughout Korea, it’s fitting that the Mandu at Arirang are shaped like a crescent moon. These fried dumplings are luscious pockets stuffed with a pork mince and served with a soy sauce dip which includes sesame seeds, shallots and a hint of ginger.

9 June 2012: Arirang’s most popular entree among non-Asian diners is probably bulgogi, Korea’s signature dish which many Americans refer to as Korean barbecue. Bulgogi is a marriage of sweet, savory and spicy tastes presented on a sizzling hibachi. It is the perfect entree with which to introduce diners (especially the non-adventurous) to Korean food. They will quickly fall in love with the thin strips of lean beef marinated in fresh garlic and soy sauce then stir-fried with yellow and white onions and julienne carrots sprinkled with sesame seeds. The “barbecue” sauce is wholly unlike American barbecue sauces in that it’s not “lacquered” on, but penetrates the meat deeply with sweet, but not cloying notes.

Korean meals traditionally include small plates of sundry appetizers and side dishes all served at the same time. Known as banchan, these side dishes are typically comprised of pickled, spiced and hot and spicy vegetables. The specialty of any Korean family is kimchee, a fiery cabbage-based staple of Korea which is heavily seasoned with garlic and chile. Arirang’s rendition is pleasantly piquant and pungent, but not as powerful as some fermented kimchee. The best description I’ve read for banchan equates them to “Korean tapas.”

9 June 2012: Imagine an American dish in which you threw together left-over remnants of favorite foods such as burgers, pizza, tacos and egg rolls, heated the menage, tossed it in a bowl with a fried egg and served it with salsa. It doesn’t sound especially appealing. Unlike Americans, Koreans have mastered the art of “leftovers disguised as a gourmet dish” in a popular dish known as Bibimbap. It’s one of the most popular dishes in Korea and its popularity has been exported to Korean restaurants in America. Arirang offers two versions, my favorite being Dolsot Bibimbap. This version is served in a hot stone pot.

Dolsot Bibimbap starts with rice served in the hot stone bowl in which it is prepared, the rice at the bottom of the bowl crackling as it continues to cook and caramelize. Layered atop the rice are slender strips of perfectly seared sirloin and namul, the aforementioned pickled and spiced vegetables in all their flavorful and colorful glory. The dish is then crowned with a single fried egg. You will then stir in gochujang, a Korean chili paste, to taste. On the Scoville scale the chili paste won’t register very high, but it’s got a wonderfully fruity flavor with just enough bite to complement the dish. This is a delicious dish with complementary and contrasting flavors coalescing wonderfully.

14 June 2016: Over the past few months it’s been a highlight of my workweek to introduce my friends Larry “the professor with the perspicacious palate” McGoldrick and the Dazzling Deanell to restaurants they might not otherwise have known about or visited. We get together every Tuesday for lunch. They were absolutely blown away by Arirang which Larry proclaimed “Best of Breed” among Korean restaurants. One of the pleasures of dining with good friends is our mutual willingness to share the bounty of our table. We think nothing of reaching over and spearing a forkful of food from each others’ plates. This practice means we all sample more than just what each of us order.

14 June 2016: One of the more interesting dishes on Arirang’s menu is JapChae, one of seven dishes on the “Noodles” section of the menu. Its description: “stir-fried mixed vegetables, beef, vermicelli noodles and toasted sesame seeds” could frankly describe a noodle dish in virtually every other Asian culinary culture. One of the most distinct aspects of this dish is the vermicelli which is slightly thicker than the vermicelli in say, Vietnamese cuisine. The vermicelli is also made from mung bean, not rice noodles. Vegetables are stir-fried to a crispy perfection and the beef has the telltale flavor of Korean barbecued beef with its sweet-savory notes. Sesame seeds are a nice touch.

The Arirang Oriental Market offers wonderful Korean comfort food at reasonable prices served by friendly attendants. A meal here may inspire you to stock up from the treasures in the grocery aisles so that you can try replicating your experience.