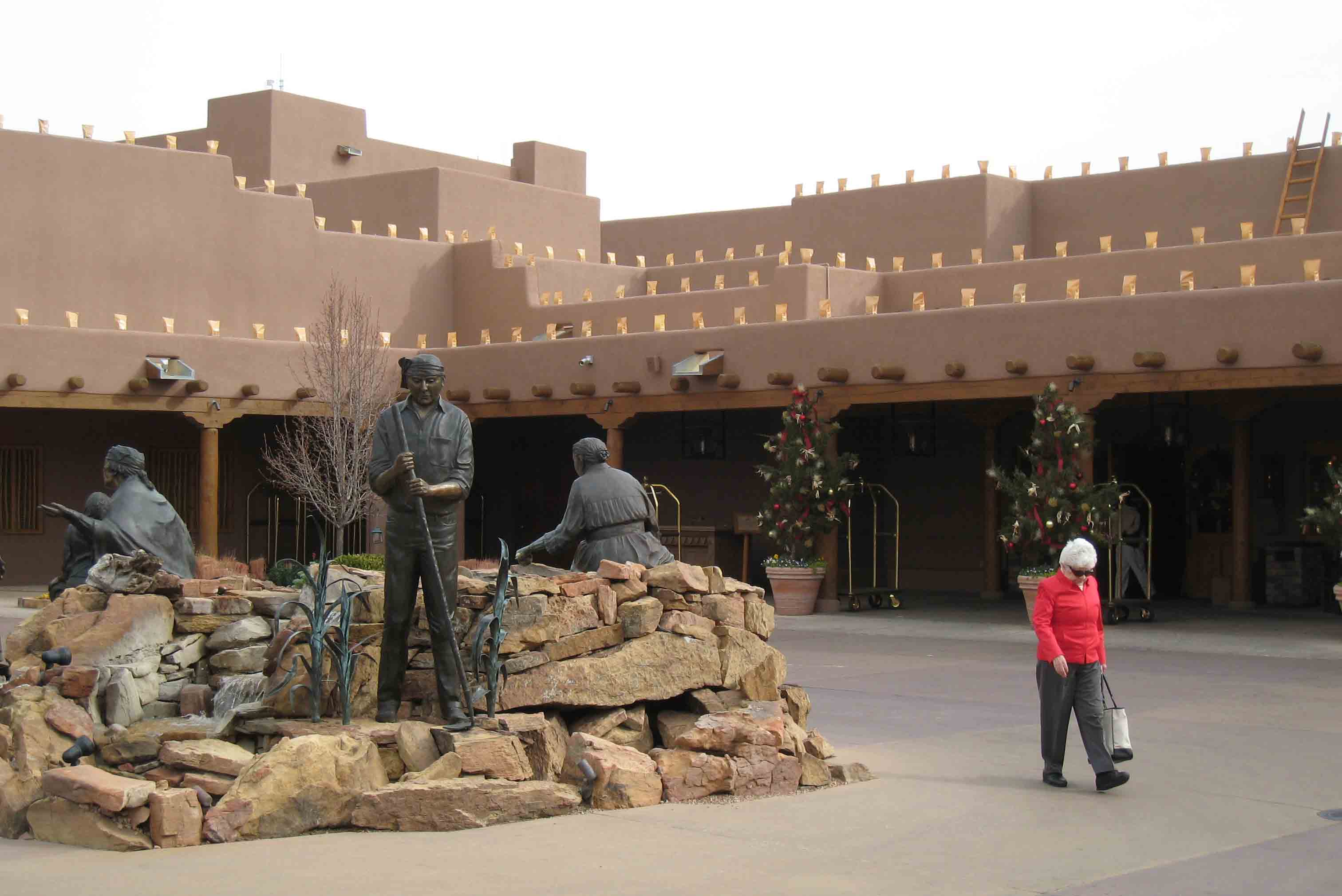 As you gaze in awe at the sheer opulence of the expansive Tamaya hospitality complex and resort and consider the Santa Ana Pueblo’s Vegas-style, high-stakes gaming center or 27-hole, championship golf course, you have to conclude that the Pueblo’s tribal enterprises are flourishing–and you would be right. An entrepreneurial spirit is nothing new to the Santa Ana people. The Santa Ana (Tamaya) Pueblo has a long and storied history of forward-thinking and self-reliance. To increase its land base and agricultural production, in 1709 the pueblo purchased 5,000 acres along the Rio Grande. Coupled with its 15,000-acre Spanish land grants and other land purchases, the reservation (population about 500) is today a vast expanse of about 73,000 acres.

While Tamaya, the ancient Keresan (Keres is a group of seven related dialects spoken by Pueblo peoples) pueblo isn’t open to the public, Tamaya, the pueblo’s opulent, award-winning Hyatt Regency resort and spa is. Located just northwest of Bernalillo, Tamaya is a sprawling complex of luxurious pueblo-style guest rooms appointed with traditional designs and modern amenities. The resort is renown for its soothing spa, nationally ranked golf course and restaurants which celebrate the tri-cultural traditions of New Mexico.

The Santa Ana Cafe is the more informal and family-oriented of the two fine-dining restaurants on the site. The restaurant serves breakfast, lunch and dinner in a comfortable setting where you’re surrounded by traditional Native American art as you dine. Picture windows provide spectacular vistas, at your forefront being the resort’s hornos in which breads are baked in time-honored ways.

The menu is a melding of New Mexican and nouvelle cuisines showcased in innovative dishes, many of which are punctuated with red or green chile and other New Mexico staples. Visit after work on Friday and even if you’re determined to order one of the mouth-watering menu options, you’ll succumb to the lure of the Friday evening Prime Rib Buffet, a bargain at under $30 a person. The buffet features a slow-roasted herb-crusted prime rib of beef, au jus carved to order. With more than a hint of pink and juices oozing freely, it is richly marbled with fat and tender enough to cut with a fork. Alas, the restaurant’s horseradish is one tame pony (if it doesn’t make my eyes water and nose run, it’s not horseradish), so fortunately the au jus and a spicy chimichurri sauce are good alternatives.

You won’t see the traditional marriage of prime rib and baked potato on the Prime Rib Buffet. Instead, you’ll savor the Yukon Gold Whipped Potato Bar featuring sautéed mushrooms and onions, roasted garlic sour cream, butter, chopped bacon, cheddar cheese and scallions–all you need to dress a potato deliciously. The whipped potatoes have the tender, buttery taste of baked potatoes without the mess of the potato skin. The buffet captures the essence of a New Mexican staple and the spirit of the Caribbean with its signature grilled red chile jerked chicken. This intricate blend of uniquely pungent spices and tender poultry is even popular among children who probably think it’s some sort of barbecue.

The third carnivore’s delight on the buffet might be pork scaloppini with burgundy braised shallots. In our travels, we’ve experienced veal, beef, pork and even venison scaloppini and have had scaloppini with a variety of sauces–some sassy and sweet, some stewy and bland and some even lemony and tart, but few as complementary as the burgundy braised shallots. The pork is moist and tender with a lively melding of savory and sweet tastes. If there’s one complaint we have about the restaurant’s “meaty main event,” it’s that the meats and even Yukon gold potatoes are generally no more than lukewarm, probably to prevent them from drying out. Don’t hesitate to have the restaurant’s attentive wait staff take them to the kitchen and warm them for you. You’ll be happy you did.

A lively mélange of assorted mixed greens with a selection of toppings (including piñon, roasted corn, and bleu cheese crumbles) and dressings (the Italian dressing is incomparable and the green chile buttermilk) make for creative salads. You might also opt for a salad of nopalitos and citrus with a charred jalapeno vinaigrette. The choices are limited only by your imagination.

Chocolate decadence defines the dessert bar. Your eyes, heart and appetite will be immediately drawn to the chocolate fountain where all your fondue fantasies will be fulfilled. You can dip all the strawberries, marshmallows and pound cake you want in rich, creamy milk chocolate. It’s so popular among chocoholics that the hot fudge brownie pudding, New York style cheesecake with strawberries and other tantalizing sweet treats are virtually ignored.

On the evenings in which the prime rib isn’t the featured attraction, the dinner menu provides a number of American and New Mexican specialties, all reasonably priced and generously portioned. The menu includes a build your own burger you can have your way–with a beef, chicken, tuna or veggie pattie and all your favorite fixings. One of the specialties of the house is a Dr. Pepper Glazed Short Rib, a braised, fork-tender beef short rib topped with “Old Time” Dr. Pepper glaze served with mashed sweet potatoes and sauteed fresh vegetables.

The Santa Ana Baby Back Ribs, sweet and spicy glazed ribs served with your choice of pinto beans or wasabi coleslaw, are quite good–better, in fact, than baby backs served at several local purveyors of barbecue.  These baby backs are uncharacteristically meaty and the meat is fork-tender.  As advertised, the glaze has a nice pronouncement of spicy sweetness though it’s not as much glazed on as it is slathered.  The wasabi coleslaw is considerably more piquant than the barbecue sauce though it won’t quite water your eyes either.

The lunch menu includes burgers, sandwiches, salads, soups and daily specials, some very inventively crafted.  Fish tacos, for example, are made with seared ahi topped with a cabbage slaw, a lime-cilantro crema and guacamole in a crispy, hard-shelled blue corn taco.  Though different than other fish tacos I’ve had in New Mexico, these are characteristically dry with the ahi being the dominant flavor.  More of the crema’s influence would have improved these tacos greatly.