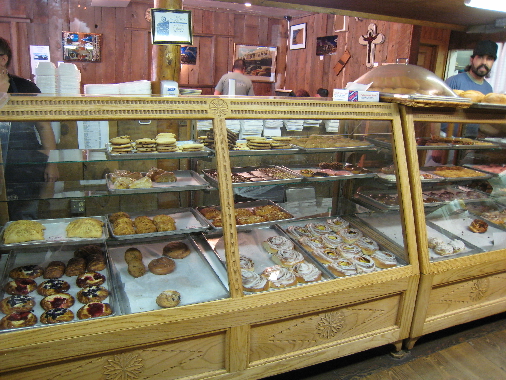 Murphy’s Law postulates that “if anything can go wrong, it will.” This rather pessimistic and oft-quoted expression has become a catch-all when everything seems to go askew. Murphy’s Law is blamed when you’re in the slowest line at a grocery store behind people who can’t find their checkbooks. It’s the reason the toast you accidentally drop off the table lands butter side down. It’s why the loudest and rudest people always sit in front of you at a movie theater.

Murphy’s Law is also the reason the restaurant you brag most about will invariably have an “off night” on the day people you most want to impress visit. It never fails! This immutable law works like compound interest. The more you brag about a restaurant, the worse it will be for your guests.

My brother George whose opinion on everything I value had told me for years that Michael’s Kitchen was one of the best restaurants in northern New Mexico. He appreciated its portion size, value and the quality of its New Mexican food (which the menu listed as “Spanish”). Our inaugural visit was compounded by mistakes. Going out on a rainy July night in 2003 when the Taos fiestas were going full bore (in every sense of that word) meant nearly an hour’s drive to go six congested miles (thank you, Mr. Murphy). We then had to wait a seemingly interminable amount of time to be seated.

When our entrees finally arrived, two of them were sent back because they were nearly as cold as the falling rain. Our bedgraggled waitress “nuked” those entrees and everything on the plate on which they were delivered (including orange slices and tomatoes). The nuking transformed George’s Taos shrimp entree into a gooey, rubbery amalgam. To chronicle everything else that went wrong would be to give Murphy a lot of credit. Sure he’d like it, but that would just give him impetus to do it again.

I normally wouldn’t return to a restaurant in which our dining experience was so nightmarish, but Michael’s Kitchen is one of my brother’s favorites and that’s a good enough endorsement for me to try it again. That second visit transpired during breakfast on August 21st, 2008, but this time Mr. Murphy didn’t join us at the table.

The restaurant, open daily from 7AM through 8:30PM, is usually packed at all hours, an indication that Taos county diners consider this a favorite dining destination. In the winter, patrons waiting to be seated will appreciate the enclosed entrance’s east-facing windows which bring in plenty of sunshine and a bit of heat to keep them from the elements.

The walls at Michael’s Kitchen are adorned with “best in Taos county” framed certificates in virtually every conceivable category: breakfast, bakery, burgers, chile, etcetera. Step inside and your first glance will be of a pastry case replete with breads, cakes, donuts, pies, cinnamon rolls and pastries of all types sure to please discerning diners.

In each of the two dining areas are old-fashioned pot-belly stoves, the type of which emblazon the shirts worn by the staff as well as the restaurant’s signage. One dining room includes the most unique telephone booth you’ll ever see. It’s a converted outhouse, the type of which is still in use in rural New Mexico. Try sneaking a picture of it and the good-natured staff may just make you sit on the one-seater with a roll of unraveled paper towels at your feet and a newspaper in your hands. It’s not a picture I’ll be posting on this blog.

The menu is very eclectic, offering everything from sandwiches and burgers at launch to New York steak and plantation fried chicken for dinner. Breakfast is served all day long. New Mexican entrees are available during all three meals.

Some of us native New Mexicans like having salsa for every meal. It’s just the way we roll. Michael’s Kitchen prepares a very nice salsa. It’s thick and chunky with a base reminiscent of tomato paste in its thickness. The piquant component comes from jalapenos, but this salsa also has plenty of red chile flavor. Oversized chips mean you might have to break them in two to scoop up nice portions of salsa.

As is often the case in New Mexican restaurants, the salsa is the most piquant item on Michael’s menu. A breakfast enchilada entree served Christmas style could use a bit more heat–the piquant kind, not the temperature kind. This sizeable entree of corn tortillas filled with scrambled eggs and smothered with your choice of chile is very good, but if, like me, the best part of waking up is hot chile in your breakfast, Michael’s chile just doesn’t cut it. It’s a flavorful chile (no cumin, but in terms of piquancy, it’s been “anglicized” a bit.

Accompanying this breakfast enchilada are pinto beans and your choice of Spanish rice or hashed browns, neither of which are particularly remarkable. The behemoth below, on the other hand, is an eye-opener. At first glance, it looks like a small loaf of bread, but it’s all sopaipilla, albeit just a bit more dense than most. Michael’s Kitchen serves real honey instead of the honey-flavored syrup other restaurants use. In fact, the restaurant sells three different types of homemade honey produced locally.

If you want an “Anglo” (with absolutely no disrespect intended) breakfast, you can always have pork chops and eggs, an order of which includes a short-stack (three) of pancakes. Being a Chicago native, this is my Kim’s favorite breakfast, one she enjoyed immensely at Michael’s. So, if you think I complained a lot about the “gringo” chile on my New Mexican entree, you can imagine how much I wanted to immerse her pork chops in a bit of potent chile.

The only thing to which I wouldn’t introduce chile are Michael’s pastries which earn the many accolades they have received over the years.