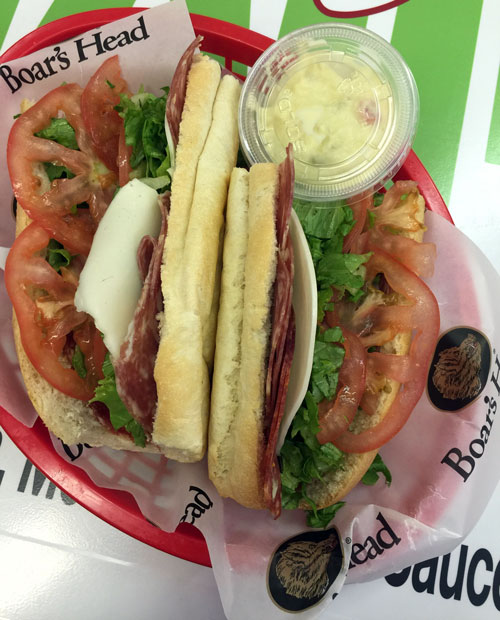 The sense of smell, more than any of our other senses, influences our ability to recall past events and experience. From among the five senses, fragrance is considered the most potent medium for conjuring up memories. True enough, some of the most enduring sensory memories of my years in the Boston area are reawakened thanks to the amazing aromas that greet me each time I visit Tully’s Italian Deli & Meats on San Mateo. It is with increased rarity that you find an authentic Italian deli which greets you at the door with the incomparable aroma of pastas, meatballs or sausages simmering in a perfect marriage of tomato sauce, garlic, basil and oregano. It’s also rare to find an Italian kitchen equally practiced at preparing outstanding pasta dishes and Italian meats.

Tully’s Italian Deli & Meats is then indeed an anachronism because it does capture you before the door with wafting odoriferous emanations that bid you welcome and which have a Pavlovian effect on your taste buds. The Camuglia family–John, Jerry and Johnny–has owned and operated this memory triggering deli since 1970, in the process creating new and wonderful memories for the legions of patrons who frequent their deli.

Tully’s is ensconced in a time-worn strip mall on San Mateo, but could easily pass for an Italian deli in Soprano country, upstate New Jersey or my former home outside of Boston. Shelves are stocked with large and small cans and jars of various Italian groceries as well as domestic and imported olive oils and specialty pastas. Prominent on those shelves are jars of Tully’s house-made marinara sauces, source of those oh-so-enticing memory enticing aromas.

A freezer showcases some of Tully’s frozen entrees such as meatballs, chicken marsala, chicken parmesan, chicken picatta and some of the city’s very best lasagna. The freezer also displays such tantalizing treasures as veal, lamb and even rabbit. It’s hard to believe that when the Camuglias assumed ownership of Tully’s, it was solely a meat market. In its annual food and wine issue for 2011, Albuquerque The Magazine awarded Tully’s a “Hot Plate Award” as the “Hot Take Home” deli Albuquerque can’t live without.

In the spirit and tradition of many East Coast Italian delis, Tully’s also features imported and domestic meats and cheeses, showcasing Boar’s Head brand products. Boar’s Head prides itself in artisanal meats and cheeses produced in time-honored old-world methods. Tully’s honors those methods by making their own hot and sweet Italian sausages, all ground from 100-percent pork enhanced with traditional spices and herbs. Sausages range from the simple to the sublime–real gourmet sausages that will enhance any meal.

Tully’s take-out business is robust and the heart of the operation, but many savvy patrons also have a filling and delicious lunch at their favorite deli before heading home with their treasures. At the counter, they encounter a menu which just might be the envy of every sandwich shop in town, a menu featuring an array of sensational sandwiches, some named for glitterati of Italian heritage. Who can refuse an Al Pacino (capocollo ham, Genoa salami, provolone and Italian dressing) or a Sinatra, sure to hit the right note with imported Parma prosciutto, fresh mozzarella, extra virgin olive oil, lettuce and tomato on a homemade roll?

There are eighteen sandwiches on the menu, more than half of which are available at half-sub size. The subs which require heating are generally not available at half-sub size. Available toppers include sliced black olives, sliced pickles, sliced banana peppers, tapenade, guacamole and bacon. Sandwiches are about a dollar south of ten dollars and are accompanied by a cup of potato salad or a bag of potato chips.

31 December 2008: While the cold meat sandwiches entice with a siren-like call, my Boston-based beckoning is often for sub sandwiches engorged with tomato sauce and seasoning adorned meatballs or sausage, the type of sub of which I consumed by the boatload in Boston. The Italian Sausage Sub and the Meat Ball Sub call loudest. The Sausage Sub features homemade Italian sausage “cooked in mom’s marinara sauce with melted mozzarella on a homemade roll.” This is a humongous sandwich, easily big enough for two to share (not that you’d want to). It’s also a messy sandwich which will redden your fingers and drip onto your clothing if you’re not careful. Ditto for the Meat Ball Sub, six homemade meatballs nestled in a homemade sandwich roll and slathered with marinara sauce with melted mozzarella. The meat balls are an amalgam of beef and pork with just enough filler to bind them. They’re seasoned with garlic and oregano in just the right amount.

31 December 2008: When the menu at an Italian deli reads “sausage,” you don’t always know what to expect. In some cases, a sausage sandwich features sliced links and in others, the sausage is ground almost like hamburger. At Tully’s, the sausage (at least on the sub) is reminiscent of breaded chicken Parmesan. It’s semi-flat and lightly breaded, but beneath that breading and under that marinara is a well-seasoned sausage that’s flavorful, filling and fabulous. The potato salad is flecked with red peppers and pickles and isn’t dripping in salad cream as some potato salad seems to be. Alas, cup-size amounts to about three or four spoons full. You’ll want more.

13 October 2012: From among the cold subs listed on both the “house specialties” and “traditional favorites” sections of the menu, one of the best is The Sicilian (for all you good Sicilian Boys). That, by the way, is a Tully’s caption. All sandwiches have clever captions. The Sicilian is made with mortadella (an Italian cured sausage seasoned with pepper and garlic), capacolla ham (a pork-derived cured ham), domestic prosciutto, provolone and Italian dressing on a homemade roll. The Italian dressing is applied generously, rendering the sandwich moist on a bread roll which absorbs it well.

23 September 2015: In Simon & Garfunkle’s 1968 number one hit Mrs Robinson, the American folk rock duo asked the puissant question “Where have you gone Joe DiMaggio?” The lyrics both perplexed and bothered The Yankee Clipper until a chance meeting with Paul Simon. Simon explained the lyrics were sincerely intended as flattery and essentially were intended to ask “where have all the heroes gone.” A better answer to the question might be “Joe DiMaggio is alive, well and delicious at Tully’s.”

The Joe DiMaggio is an Italian sub described by my friend Larry McGoldrick, the professor with the perspicacious palate, as “the absolute best Italian Sub I have ever had.” A spry septuagenarian with the youthful vigor of a twenty-something, Larry knows a thing or a million about subs. So do I. This is an outstanding mountain of a sandwich (pastrami, ham, Genoa salami, Provolone, black olives, peppers, lettuce, tomatoes and Italian dressing stacked on a whole or half sub roll). The designer of this delicious deli sandwich deserves a raise. It’s not enough that the Joe DiMaggio is packed with ingredients. Those ingredients go together as well as milk and cookies or chocolate and…chocolate.

16 May 2018: It’s been said that “if you remember the 1960s, you weren’t really there.” Even if you spent the swinging 60s in an addled state, some memories are indelible. So are some 60’s catch phrases such as “here come da judge” (especially when uttered by fellow Air Force veteran Flip Wilson). Espying the sandwich board listing “The Judge” as the special of the day certainly dredged up memories of Flip’s irreverent skit. Moreover, it inspired pangs of hunger. There can only be one verdict about this Judge—Absolutely delicious! The evidence–hot and sweet sopressata, salami, Provolone, lettuce, tomato and Italian dressing. I certainly plead guilty of devouring this behemoth of a sandwich (roughly the size of two burritos).

31 December 2008: On lazy days when you don’t want to cook or perhaps when you want to spoil yourself, let pasta pamper you. Pick up a lasagna from Tully’s freezer. It’s layers and layers of pasta sandwiching pork and beef all slathered with marinara sauce and topped with two melted cheeses and several complementary spices. This is lasagna the way it’s made in some Boston area restaurants, those specializing in red meat sauces. It’s lasagna which imbues your kitchen with those memory inducing aromas you’ll treasure.

There are few things in life more satisfying than a sandwich at Tully’s, but it’s possible to improve on your Tully’s experience by having an Italian cookies and pastries Saratori’s Di Tully, a pastry shop that will remind East Coast transplants of Italian pastry shops in New York. If you haven’t been to Tully’s in a while, you’ll be happy to learn that you now have to enter through Saratori’s entrance to get to Tully’s. It’s akin to previewing heaven on Earth.