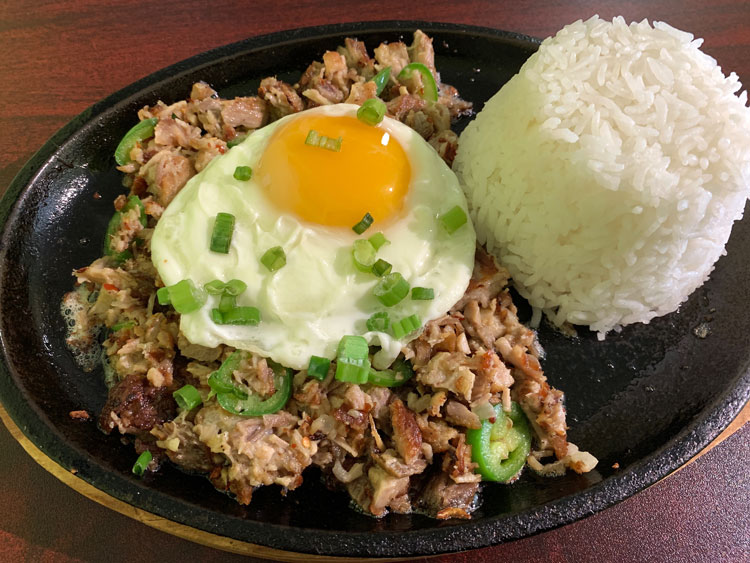 According to the United States Census Bureau, by 2016 the Asian American population–including those of multiracial, Hispanic and Latino ancestry–had reached nearly 21 million, constituting about six-percent of the Fruited Plain’s total population.  As the table below illustrates, there’s absolutely no correlation between population and the number of restaurants across the fruited plain representing the listed Asian ethnicities.

Just try finding an authoritative source enumerating the country’s Filipino restaurants.  There is none.  Despite being the second most populous Asian-American ethnic group under the spacious skies, there’s plenty of anecdotal evidence indicating there are very few Filipino restaurants in the United States–even in California where Filipinos are the largest ethnic group in the state at at 1.5 million.  Contrast that with Thai restaurants.  Despite a population of only 300,000 Thai-Americans, Thai restaurants have exploded across the country, today numbering around 5,300

So why aren’t there more Filipino restaurants in this country?  It certain baffles the culinary cognoscenti who in recent years have predicted the ascendancy of this diverse cuisine.  Travel Channel Bizarre Foods” host Andrew Zimmern foretold in 2012: “I predict, two years from now, Filipino food will be what we will have been talking about for six months … I think that’s going to be the next big thing.”  Similarly, legendary raconteur and television personality Anthony Bourdain expressed in 2017 that “American palates are just starting to “become seriously interested” in Filipino food, but they’re to begin “embracing and learning” about one of the most underrated but delicious cuisines out there.”  Jonathan Gold, the only food critic to ever win a Pulitzer Prize stated in 2012: “the Filipino Food moment” is now upon us, and its unique yet familiar flavors and cheap prices have finally thrust it into the gaze of American food culture.”

These enthusiastic endorsements again beg the question “why aren’t there more Filipino restaurants in this country.”  Allow me to posit my own theory, one based on having shared a lot of lumpia with Air Force colleagues of Pinoy descent or who married Filipino women.   Filipinos are probably the most hospitable and happy people you’ll ever find and they love to eat (my kind of people). In fact, the Filipino greeting, “Kumain ka na ba?” literally means, “Have you eaten?”  When they hadn’t seen me in a while, they felt comfortable enough to remark, “Look how fat you’ve gotten,” meant not as an insult, but as a genial observation that I seemed to have been eating well.  It’s my theory that Filipinos would rather host you at home where they can lavish you with attention than they would feed you at a restaurant where they might not get to know you.

During our 24 years in the Land of Enchantment since my Air Force retirement, we’ve seen only three Filipino restaurants give it the old college try in the Duke City.  Two–including the Fil-Am Fast Food Mart which I believed really had a chance to break through–were short-lived.  The third, a  Lilliputian eatery in Albuquerque’s Uptown area, appears to have staying power.  It’s been around since November, 2015 though I somehow didn’t figure out that the quaintly-named Bubblicitea Cafe served Filipino food.  In my defense, that name has probably fooled a lot of people who assumed (as I did) that the cafe is solely a place for boba tea.

Filipino cuisine has been described as “the original fusion cuisine.”  Indeed, contemporary Filipino cuisine is a mishmash of Spanish, Western, Chinese, Japanese, and Pacific Islander flavors and ingredients.  It’s similar to, but also vastly different from the cuisine of other Southeast nations.   Hot, salty, sweet, savory and sour define the flavor profile of many Filipino dishes, but it’s an affinity for vinegar and sourness that makes Filipino food unique.  Unlike the cuisine of other Southeast Asian nations, you generally won’t find many overly sweetened dishes (despite the tendency to mix sweet and savory foods).

1 February 2019: That said, Filipinos love sweet pastries and breads, several of which are displayed gloriously in pastry cases just before you reach the counter where you place your order.  My long-time favorite is the pan de coco which translates to English as “coconut bread.”  Pan de coco is a golden hued roll stuffed with sweetened shredded coconut meat.  This plump pastry which resembles a dinner roll has its genesis in Central America.  It was brought to the Philippines by the Spaniards in the 1600s and is sold in meriendas (neighborhood bakeries or panaderias) throughout the island nation. Pan de coco may remind you of Vietnamese pastries.

1 February 2019: Filipino cuisine’s biggest nod to Chinese food is probably Pork Asado Siopao, a larger version of the Cantonese steamed bun.  These steamed flour buns are usually stuffed with sweetened pork, chicken or beef (but never cat as a popular Filipino urban legend once contended) and are served on bamboo steamer baskets.   Their soft and fluffy “balls of dough” appearance is off-putting to some, but only until their first bite.  The asado (grilled) pork is a melding of sweet and savory flavors, the latter courtesy of soy sauce.  Though you can order them individually, they’re best when paired with the Mami.  Make sure to order Bubblicitea’s “Mami Combo,” beef mami noodle with two siopao.

1 February 2019: Beef mami noodle (tender beef brisket and egg noodles, boiled eggs, scallions, cabbage, salt, pepper and other toppings in a beef broth) is the Philippines’ answer to the beef noodle soups served across Southeast Asia.  It’s a comfort food favorite enjoyed throughout the year, but particularly in cold weather.  It doesn’t have the anise-cinammon-ginger-kissed sweet notes of its Vietnamese counterpart nor the garlicky-fish oil flavors of Thai beef noodle soups, but more than other Southeast Asian soups, it showcases the savory elements of beef and beef broth.  The egg noodles are a delight to slurp up while the hard-boiled eggs are a very pleasant surprise.  Instead of devouring them whole, try mashing them into the soup.

6 February 2019: Though often referred to as purple sweet potatoes, ube are yams with a dark, rough-looking skin. Ground into a powder, ube is then used in Filipino desserts characterized by their bright purple color.  Among those desserts is ube crinkles, delightfully delicious and dense cookies with a crunchy (not like potato chips; more like bread) exterior.  They’re gooey and moist on the inside and coated with powdered sugar sure to get on your clothes.  Four per order of these grape-colored cookies will please your sweet tooth.

6 February 2019: During my inaugural visit, all seven diners sitting on six two-top tables cobbled together ordered the very same thing, albeit at different levels of heat.  Their dish of choice was pork sigsig, a dish Anthony Bourdain believed: “is perfectly positioned to win the hearts and minds of the world as a whole.”  He proclaimed pork sigsig is “most likely to convince people abroad who have had no exposure to Filipino food to maybe look further and investigate further beyond sisig.”  If anything, pork sigsig is so good, you may not want to do any further investigation.  It’s so good, you may not want to order anything else.

That, of course, would be a tragedy because there are many dishes worthy of exploration.  Still, that sigsig is so preternaturally good it’ll be a challenge to order something else.  Bubblicitea probably doesn’t prepare it with parts of pig head and chicken liver as the dish was first conceived. If the notion makes you queasy, it’s probably best not to ask.  You’ll revel in a delicious montage of crunchy and velvety soft pork bits reminiscent of slow-cooked (barbecue), chopped pork.  The tender, not quite caramelized pork is tossed with scallions, jalapeños, citrus juice and sundry seasonings then topped with a sunnyside-up egg and served on sizzling metal plate that retains its heat.  It’s one of the best dishes to cross my lips in 2019, a savory medley of piquant, savory, umami flavors you could easily become addicted to.