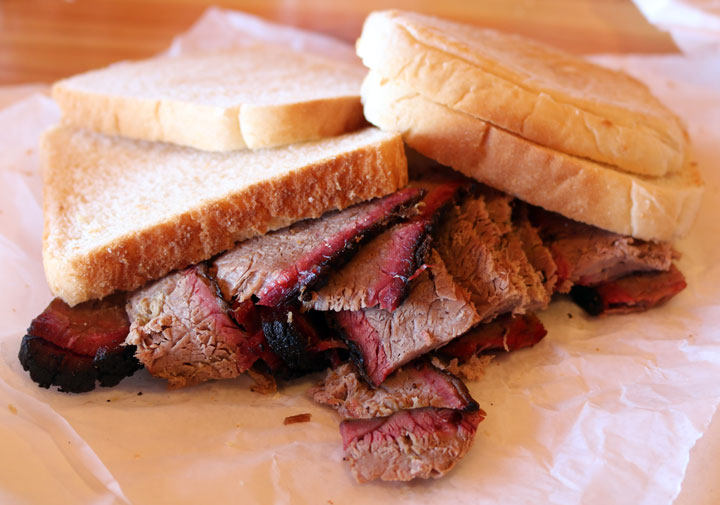 I first sampled Rudy’s Country Store & Bar-B-Q’s products in 1993 in Leon Springs, Texas, a San Antonio suburb on the fringes of the magnificent Texas Hill Country. At the time Rudy’s was just beginning to make inroads toward becoming a significant barbecue presence in Texas where beef and brisket are king. Back then Leon Springs appeared to be a test ground for new restaurant concepts–and in fact, it is the site of the first Romano’s Macaroni Grill and the first Rudy’s Country Store & Bar-B-Q (as well as a concept called Nacho Mama’s which might have been the best of the lot.)

My first impression was that this intriguing country store concept would be a perfect fit for for Albuquerque which until recent years has had pretty slim pickings when it comes to great barbecue. It took more than a dozen years for those hopes to be realized. Today, Rudy’s now has two stores in the Duke City. This expansive enterprise also has restaurants in Colorado, Kansas, Arizona, Oklahoma and throughout the great state of Texas.

Rudy’s still offers Texas style tangy barbecue in a country store setting. Unlike many Texas barbecue bastions which seem to prefer acrid mesquite woods, Rudy’s meats are prepared using only oak, a slower-burning wood than mesquite. Rudy’s meats are also imbued with a nice smoke ring characteristic of good barbecue. Those meats are flame cooked pit-style. The meats are dry-rubbed, not slathered with sauce before being placed in the smoker. The meats are characteristically moist, tender and melt-in-your-mouth delicious. You can purchase them in increments: quarter-pound, half-pound, pound or more if you so desire. With a half-pound, you can build two to three stacked sandwiches.

The meats are delicious with or without sauce (sause is how it’s spelled on Rudy’s menus). There are two kinds of sause–a hot sause which is better, bolder and more peppery than its counterpart, labeled “sissy sause.” New Mexicans who adore green chile give the hot sauce a healthy respect and might insult wimps who use the sissy sauce by calling them Texans. To some, the secret to the deliciousness in Rudy’s barbecue starts with the distinctive sause and its peppery flakes which imbue a sweet tanginess and zesty kick (especially if you use the hot sause).

Surprisingly Rudy’s markets itself as the world’s worst barbecue. There are at least two explanations for this slogan’s genesis. Some surmise that this is just a clever advertising ruse intended to be taken ironically, not literally. It’s as much a “rib” as the meaty ribs on the menu. The other explanation is that “worst” is a play on the German word “wurst,” a type of sausage prepared in the Texas hill country by Germans who first settled this part of Texas in the mid-1850s.

A great meal features a pound or more of very good smoked meat wrapped in butcher paper with accompanying bread slices (rather ordinary wheat or white bread) that make for several sandwiches. Rudy’s brisket is probably the number one selling item on the menu. It is tender, juicy, and melts in your mouth. You can smell the oak that’s used to smoke it in every bite. The pork and brisket are very good, links are terrific and ham is excellent. If you’re a ham fanatic, Rudy’s serves some of the best in town. A light, sweet glaze contrasts with the porcine saltiness of the ham to dance on your taste buds.

Seating is family-style on wooden picnic tables, but no one seems to mind sitting with strangers. Perhaps that’s because most patrons are too busy with the entrees, but more than likely it’s because the environment seems to inspire friendliness. Aside from the indoor seating with a view of the prep tables where the slicing and cutting is done, Rudy’s offers covered porch seating. Our debonair dachshund The Dude enjoys the covered porch during inclement days that aren’t fit for man or his best friend.

26 April 2020: If you’re from New Mexico (heck, if you’re from anywhere outside of Southern Texas), you probably had the same reaction we did the very first time you sampled Rudy’s breakfast “tacos.”  “This isn’t a taco.  It’s a burrito!” we exclaimed in unison.  That was before we learned about the I-20 Theory posited by Garret Heath of SAFlavor.com, a blog that showcases the best that San Antonio (Texas, not New Mexico) has to offer.  Heath basically declared that denizens of the Lone Star State  who live either side of the Interstate 20 (I-20 which bisects the state right in the middle traveling East to West) have drastically different views on tacos.  If you’re from north of the I-20 dividing line, you’re on Team Burrito and if you’re south of that line of demarcation, you’re on Team Taco. This theory applies solely in Texas.  Those of us in more enlightened states know that we’re eating burritos though we’ll happily call them tacos if they’re all as delicious as Rudy’s tacos.

Between the unholy hours of seven and ten in the morning (when much of Albuquerque is still sleeping), Rudy’s offers “grab and go” tacos which you can customize with your favorite smoked meats. Once you’ve had tacos made with smoked meats, you might never again be satisfied with ground beef tacos (or any Taco Bell faux-simile thereof). The grab and go options include bacon, egg and chile; sausage, egg and chile; brisket, egg and chile; jalapeño sausage wrap; sausage wrap; carne adovada wrap; chop taco and beans and cheese. Any option with chile–red or green–is best.  These tacos are even better when you pair the red or green chile with Rudy’s original sause which contributes a peppery bite.

Rudy’s employees wear shirts emblazoned with the slogan, “We didn’t claw our way to the top of the food ladder only to eat vegetables.” That’s the way most diners feel as well. The walls nearest the entrance are festooned with accolades proclaiming the self proclaimed “world’s worst barbecue” Albuquerque’s very best several years running by publications such as Albuquerque The Magazine, The Alibi and Local IQ.

Since man cannot live on barbecue alone (though some of us are willing to try), a collection of sure to please desserts are available: banana pudding, pecan pie, chocolate pudding, buttermilk pie, Rice Krispy treats, ice cream and peach cobbler. Buttermilk pie, despite its deeply Southern roots has become somewhat of a big hit at Rudy’s in New Mexico. This custard pie with its faintly caramelized top is almost cloying in its degree of sweetness, but it’s perfect for sweet-toothed diners.

Rudy’s was one of the first restaurants to introduce Albuquerque diners to Stewart’s sodas which come in several varieties including a root beer which was named the top root beer at the 2006 World Cup of Root Beer. Stewart’s sodas evoke nostalgic tangs among people who grew up with Nehi sodas and their colorful variety.

Rudy’s is perhaps the best Texas import to land in the Land of Enchantment since UNM basketball star Kenny Thomas transferred from El Paso to Albuquerque High School. It’s become a barbecue landmark in its two Duke City locations.