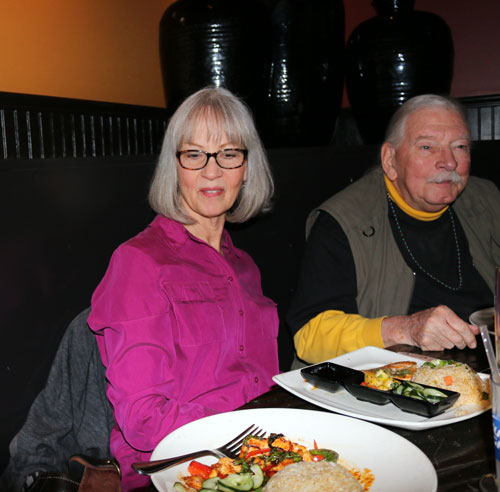 Fusion cuisine.  The term often makes the most stodgy of purists cringe.  Even those among us with the most liberal of palates have been known to cower at its mention.  All too often, fusion cuisine is a loosely defined excuse for restaurateurs to unleash any number of unnatural flavor combinations upon the chaste, unsuspecting taste buds of diners seeking a memorable meal.  Like a shotgun culinary marriage, felonious acts have been perpetrated in the name of fusion, with disparate exotic ingredients forced together by the imagination of sadistic chefs.

It would be impossible, however, to dismiss fusion cuisine entirely.  In one respect or another, much of the food we eat is a product of fusion.  There is no one national cuisine entirely self-contained and isolated.  Food is a work in progress–always adapting, always assimilating, always evolving.  Perhaps nowhere is that more evident than in the melting pot that is America where the influence of immigrant cuisine from throughout the world has resulted in a true fusion of culinary cultures, where the sum of the whole is more delicious than the cuisine of each culture individually.

Over the centuries–through brutal conquests, peaceful immigration and mutually beneficial trade–Southeast Asian nations in close geographic proximity to one another have shared culinary techniques, recipes, ingredients and implements to the extent that the dishes of one nation were adopted by other neighbor nations.  Korea, Japan and Thailand (among others), for example, can thank Chinese traders for such everyday stapes as black vinegar, noodles and cured pork.  This culinary evolution over time is not what purists decry.  That would be reserved for the chefs who, like the proverbial mad scientist with bubbling beakers, toss into a pot ingredients which have no business together.

When Jinja  (think about how a citizen of the great state of Massachusetts  might pronounce “ginger”) Bar & Bistro launched in 2002, I wondered just how much, if any, disparate ingredient and culinary technique mixing there would be and whether or not Jinja would even pretend to honor the culinary traditions of the Southeast Asian nations its menu purports to showcase: Japan, China, Thailand, Vietnam, Malaysia and Singapore.  The restaurant’s Web site indicates “we use fresh, authentic ingredients, inviting our chefs to add distinctive twists to popular favorites such as pot stickers, noodle bowls, tempura, and beef and fish dishes.”  That sounds innocuous…and interesting enough.

More importantly, I wondered if it really mattered whether or not Jinja honored the culinary traditions of Southeast Asia–not by copying them to the letter, but by not making them unrecognizable parodies of the originals–if the cuisine is delicious and the diners enjoy their experience.  Resigned to letting my taste buds, not my over-analytical mind decide for me, I found myself enjoying my inaugural dining experience at Jinja very much.  Jinja  just  seemed to resonate a contemporary, fun attitude and boundless energy.  Looking around me, it was evident other diners genuinely seem to enjoy themselves and the dishes they ate.  In the grand scheme of the dining experience, isn’t that what really matters?

With an intimate neighborhood restaurant setting and and a unique menu, Santa Fe’s Jinja became an immediate success because it filled an untapped niche in the “City Different” dining scene. Remarkably, it did so despite being situated on the northwest fringes of the plaza (the city’s tourist Mecca) and within easy walking distance of the struggling DeVargas mall. Jinja may be the most attractive and welcoming Asian restaurant in north-central New Mexico although if you wear transition lens glasses, you might not be able to tell until your eyes adjust.

Jinja’s walls are adorned with slightly risqué, vintage travel and advertising posters and black and white photos of southeast Asia. Mood lighting, high-backed oversized booths with comfortable throw cushions, plenty of dark wood accents, curvilinear banquettes and appealing pottery add to the restaurant’s unique and inviting ambiance. The look and feel is upscale Polynesian nightclub, circa the 1930s or 1940s. A drink menu highlights exotic Polynesian libations and the bar setting (pictured above left) appears to resonate fun as it dispenses Singapore Slings, Mojitos, Sazeracs and lots of those cutesy drinks with tiny umbrellas.

The chef’s staff employs only authentic, traditional and exotic ingredients, among them galangal root, lemongrass and kaffir lime leaf in crafting nearly thirty different sauces. The meats and seafood are of the highest quality.  The not-so-secret ingredient in everything from stock for soups to cocktail mixes is Jinja, er…make that ginger, a versatile spice that enhances both sweet and savory items while providing healthful benefits.

The “classic starters” (appetizers) menu offers eleven items, some large enough for two to share while others are sizable enough to make a small entree.  Perhaps the most popular starter are the Imperial Lettuce Wraps, four crisp lettuce cups filled with a mixture of chicken, smoked ham, shitake mushrooms, water chestnuts and fresh green onions garnished with fried bean thread noodles and served with a sweet Thai chili sauce.  Lettuce wraps have become a de rigueur offering among Asian fusion restaurants, most notably the popular chain P.F. Chang’s.  Jinja’s version is better.  It’s a messy hand-held dish, but one that’s enjoyable to eat.

Another popular starter are the Yin Yang Shrimp, twelve crispy black tiger shrimp served butterfly style and dusted in salt and pepper, garnished with green onions and served with a yin and yang of sweet, plum ginger sauce and spicy Vietnamese sauce.    In the wild, black tiger shrimp can grow rather large, but because they have a higher moisture content, they tend to shrink significantly when prepared.  They have a very mild flavor some compare to lobster and because of that mild flavor, are excellent vessels for flavorful sauces.  The plum ginger sauce and spicy Vietnamese sauce are both rather on the sweet side, but are greatly improved if you throw in some of the green onions on the plate.

Anne Hillerman, the terrific restaurant critic for the Albuquerque Journal North, has a very high regard for Jinja’s Malay Coconut Soup.  It’s a Jinja best-seller, the most popular of the three soups on the menu.  The Malay Coconut Soup combines the spice of housemade Tom Yum (a very popular Thai soup) with the sweetness of coconut milk,  mellow flavor of shrimp,  thickness of chewy udon noodles, crispness of carrots, sharpness of green onions and delicate sweetness of bean sprouts.  The Tom Yum components provide distinct hot and sour flavors, with fragrant herbs judiciously used in the broth.  There’s a lot going on in this bowl of deliciousness.

Among the entrees, the Singapore Noodles (an American Chinese restaurant invention and not native to Singapore) have so totally blown me away that in three visits, I’ve violated a personal convention by ordering it every visit to the exclusion of other potentially delicious entrees.  Jinja’s Singapore Noodles are simply among the best yellow curry dishes I’ve had in the Southwest with a tangle of curry imbued vermicelli noodles which are a delight to eat.  The yellow curry has a kick, but most New Mexicans won’t have a problem with its piquancy.  Ingredients include a generous amount of Char Sui BBQ pork tenderloin (or marinated tofu if you prefer), painfully thin rice noodles, green onions, chopped bell peppers, bean sprouts and egg garnished with chopped peanuts and fried shallots.  The Char Sui barbecued pork is perfectly done with a pleasantly subtle sweet sauce.

Because of my addiction to those fabulous Singapore noodles, it’s been up to my Kim to order other items on the menu and let me try them.  One of her favorites has been the Teriyaki Lacquered Beef Skewer, a skewer of grilled beef tenderloin marinated in Jinja’s signature teriyaki sauce accompanied by a skewer of red and green peppers, red onion and pineapple (you can choose to omit any of those) and served with your choice of Thai Jasmine white rice or Tsuru Mai brown rice.  One of the things that sets the Teriyaki sauce apart is that it’s not overly sweet and has a complex flavor profile that includes savory and tangy notes.  The beef is prepared at medium-rare unless you specify otherwise.  Each bite-size chunk of meat is tender and delicious, not a hint of sinew or fat anywhere.

Perhaps even more fabulous than the excellent entrees is dessert, especially the dark, molten chocolate silk cake served with Vietnamese coffee ice cream and toffee sauce. It’s one of the best desserts we’ve had in New Mexico and equal to a similar flourless cake served at Roy’s in Las Vegas.  Another post-prandial sweet treat at which Jinja excels is cheesecake.  A rotating repertoire of wondrous cheesecakes will test your willpower.  One of the most tempting is a key lime cheesecake topped with a pomegranate-cherry sauce on a Graham cracker-coconut pie crust.  It’s sweet, it’s tangy, it’s a bit sour, but it’s mostly decadent and delicious.

Jinja Bar & Bistro is a restaurant which gives the term “fusion cuisine” a good name.  Moreover, it’s a restaurant which prepares Asian cuisine in interesting and delicious ways.  Since the 2002 launch of the original Santa Fe restaurant, two Albuquerque locations have also opened to critical acclaim.