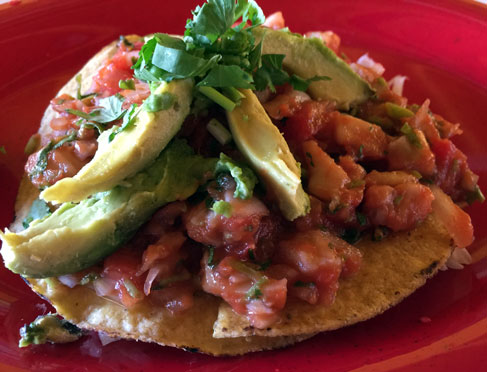 “The immediacy of a taco, handed to you hot from grill and comal, can’t be equaled.
You can stand there and eat yourself silly with one taco after another,
each made fresh for you and consumed within seconds.
A great taco rocks with distinct tastes that roll on and on,
like a little party on your tongue, with layers of flavor and textures:
juicy, delicious fillings, perfectly seasoned; the taste of the soft corn tortilla;
a morsel of salty cheese and finally, best of all,
the bright explosion of a freshly-made salsa that suddenly ignites and unites everything on your palate.
At the end of our two or three-bite taco you just want to repeat the experience until you are sated.”
~Deborah Schneider, 1000 Tacos | Mexico, One Bite At A Time

If you’re wondering why such a heartfelt expression of sheer appreciation and unfettered love has been so eloquently conveyed about something as humble and–some would say pedestrian–as the taco, perhaps you’ve haven’t heard about the taco evolution-slash-revolution taking America by storm. And no, I’m not talking about Taco Bell’s Doritos Locos Taco Supreme (that’s a mutation, not an evolution). Nor am I talking about artisan cooks exploiting the limitless possibilities of what is essentially a rather simple concept–a corn or flour tortilla stuffed with sundry and delicious ingredients.

To be sure, a paean could be written about the creative use of multi-ethnic ingredients in constructing tacos bursting with flavor profiles heretofore unexplored. Judges and guests alike certainly waxed poetic about the fusion evolution vividly on display at the 2015 Taste of Rio Rancho where Street Food Blvd earned three first place awards (best appetizer, best entree and People’s Choice) by showcasing its unique tacos. Over the years we’ve also been enthralled by temptingly toothsome tacos at such exemplars of cutting edge cooking as Pasion Latin Fusion, Sophia’s Place and others, but none of them exemplify the taco evolution/revolution of which I write.

No, my friends, the taco evolution/revolution of which I write is the widespread availability of the humble Mexican taquerias which have exploded across the culinary landscape over the past two decades or so. Though not nearly as ubiquitous as Taco Bell (which Anthony Bourdain would probably say is as widespread as herpes), the number of quality Mexican taquerias across the fruited plain might surprise you. These taquerias have introduced teeming masses yearning to eat well to the concept that sometimes simple, fresh and relatively unadorned is best. Most of these taquerias are the antithesis of fancy, but they’re paragons of deliciousness.

For many savvy taco aficionados across the Duke City, the taco trek begins and ends on the west side of Bridge Boulevard scant yards from where it crosses the Rio Grande. That’s where you’ll find Taqueria El Paisa, a delicious little slice of Mexico in the Land of Enchantment. Open for breakfast, lunch and dinner seven days a week, El Paisa maintains an operating schedule that would exhaust many of us. It opens its doors when some of us are still sleeping (7AM) and closes at midnight, long after we’ve gone to bed.

Despite its diminutive digs, El Paisa is heavily trafficked, its Lilliputian dining room accommodating only a few diners while a sprawling covered porch handles the overflow crowds. And they do overflow! Just how good is this taqueria?

While it bears the name “Paisa,” a diminutive of “Paisano” which translates from Spanish to “countryman,” diners of all stripes and colors are welcome here. It’s a friendly milieu in which it may help to know a little Spanish, but it’s not absolutely requisite. You and the servers at the counter can make yourselves mutually understood even if it means pointing at the menu (which is also in Spanish). That menu hangs to the right of the counter where you place your order and you’ll espy it the second you walk in.

At first glance, the menu may appear to be rather limited. Its offerings are categorized into burritos, gorditas, tacos, tortas and aguas frescas. The variety increases exponentially because you’re able to have your tacos, burritos, gorditas and tortas constructed from the same basic ingredients (al pastor, buche, barbacoa, carne asada, etc.). For example, not only can you have a taco al pastor, you can order a burrito stuffed with the same al pastor pork. If the menu doesn’t make you drool, the “cheap eats” pricing structure just might. Two can eat rather well (and probably take some home) for around twenty dollars.

1 February 2015: In addition to eating well, you can drink merrily. Not only does El Paisa offer Mexican Coke in a bottle (which is sweetened with real sugar and not the high-fructose corn syrup used in America), you’ll find some of the very best aguas frescas in town. Served from large barrel-shaped containers, these refreshing beverages actually taste like the fruits (or almond milk and cinnamon in the case of horchata) from which they’re derived. The melon, platano (banana), sandia (watermelon) and piña (pineapple) are absolutely amazing! The accommodating wait staff may even acquiesce if you ask them nicely to give you a mix of any two. Banana and pineapple make a wonderful combination. Simply amazing!

1 February 2015: So are the tacos although the more appropriate descriptor would be “muy ricos,” the Mexican term used for food items which are “very delicious.” The quality of riquisimo (even more delicious) begins with the soft corn tortillas in which all other ingredients are nestled. A pronounced corn flavor coupled with an inherently pliable texture make them the perfect vessel for the ingredients of your choice, topped if you desire with chopped onions and cilantro.

1 February 2015: Four different salsas of varying piquancy are also available, but the more incendiary among them will serve more to obfuscate other flavors than to ameliorate them. The salsa offering perhaps the most refreshingly pleasant and just right heat level may be the tomatillo-jalpeño salsa which you might be tempted to chug. It’s very good! You won’t want anything masking the glorious flavor of the meats, especially the al pastor. That the al pastor is so delicious was no surprise, but its just slightly crispy texture (not quite chicharron-like, but in the vicinity) was a pleasant surprise. The other meats (carne asada and carnitas) we sampled had similar qualities and were equally enjoyable.

1 February 2015: Burritos are of the hand-held variety and are about seven inches in length. Each tightly-wrapped flour tortilla plays host to some of the very best burritos in Albuquerque. You’ll exclaim “Holy Mole” at your first bite of the mole burrito, love-me-tender tendrils of pork prepared in a complex and numerous blend of ingredients, some with a discernible sweetness and all coalescing to provide a back-of-the-throat heat you’ll enjoy. It’s an amazing mole made even more impressive by its low price. It’s not every Mexican restaurant which serves a chile relleno burrito so if you see it on the menu, you’re well advised to try it. In contrast to the mole which is dominated by sweet notes, the chile relleno burrito has a pleasant bite. It won’t water your eyes, but your tongue and the back of your throat will feel its bite.

19 June 2015: There are so many Mexican restaurants in Albuquerque offering ceviche that sometimes the only thing distinguishing one from another isn’t the freshness and flavor of the seafood, but the influence of citrus. Some border on an almost lip-pursing lime-infused flavor while others have a much lesser presence of citrus juices. There’s comfort in the consistency of getting what you’re expecting at virtually every Mexican restaurant. El Paisa’s rendition of Ceviche is the first to surprise me in months. At first glance, it resembles every other ceviche and in composition, it has all the standard ingredients: fish, chopped tomatoes, onions, cilantro and avocado slices atop a crispy corn tortilla. What distinguishes this one is the tomatoes which are wholly unlike the artificially ripened, flavorless variety so prevalent everywhere. These tomatoes have a flavor profile very much like a sweet tomato jam. It’s a pleasant departure from the usual.

19 June 2015: When pining for a delicious sandwich, the notion of finding one at a Mexican restaurant doesn’t always jump to the surface. Perhaps it should, especially if you’ve become budget conscious and tired of parting with your Alexander Hamiltons. In Mexico, just as in the United States, the sandwich has become a ubiquitous staple. What it hasn’t become is unaffordable. For just about what you’d pay for half a sub at one of those abysmal chains, you can get a torta stuffed with sundry ingredients and you’ll wonder why you sunk your children’s inheritance at Subway. El Paisa offers a phalanx of tantalizing tortas, Among them is the torta de jamon, a savory, crusty bolillo engorged with two slices of fried jamon, a thin Mexican ham; lettuce; tomatoes; cheese and avocadoes. It’s moist, delicious and flavorful. Frankly, it’s got everything you crave in a sandwich and so much more.

10 June 2015: Gorditas which translate from Spanish to “fatties” are a popular street food in Mexico and have gained a foothold in the culinary culture of its bordering states. Loosely described as “flat bread sandwiches,” gorditas are constructed from masa (corn or flour) and are about the size of the corn tortillas used for tacos only much thicker. They’re usually split open and stuffed with sundry ingredients. El Paisa’s gorditas are terrific and they can be stuffed with any of the wondrous ingredients with which you can stuff a burrito or sandwich. The al pastor is my early favorite.

20 April 2016: When my friends and frequent dining companions Larry “the professor with the perspicacious palate” McGoldrick and the Dazzling Deanell met me for lunch at El Paisa I welcomed them with “Bienvenidos a Mexico.” It isn’t far from the truth. Both recognize that El Paisa is as authentically Mexico as you’ll find in the Land of Enchantment. Among the buffet table of items we shared (for a ridiculously low price), was a quesadilla for which we requested an al pastor filling. Larry called it the very best quesadilla he’s ever had while Deanell was surprised at just how good a quesadilla can be. Stuffed with queso (naturally), beans and al pastor, this quesadilla is indeed an adventure in delicious, perhaps equal to the quesadilla synchronizada at La Familiar as Albuquerque’s very best. This tortilla treasure is accompanied by cheesy and delicious beans and a rich guacamole.

Taqueria El Paisa is the real thing–as authentic a taqueria as you’ll find in Old Mexico without pretentions or compromise. It’s the home of riquisimo!