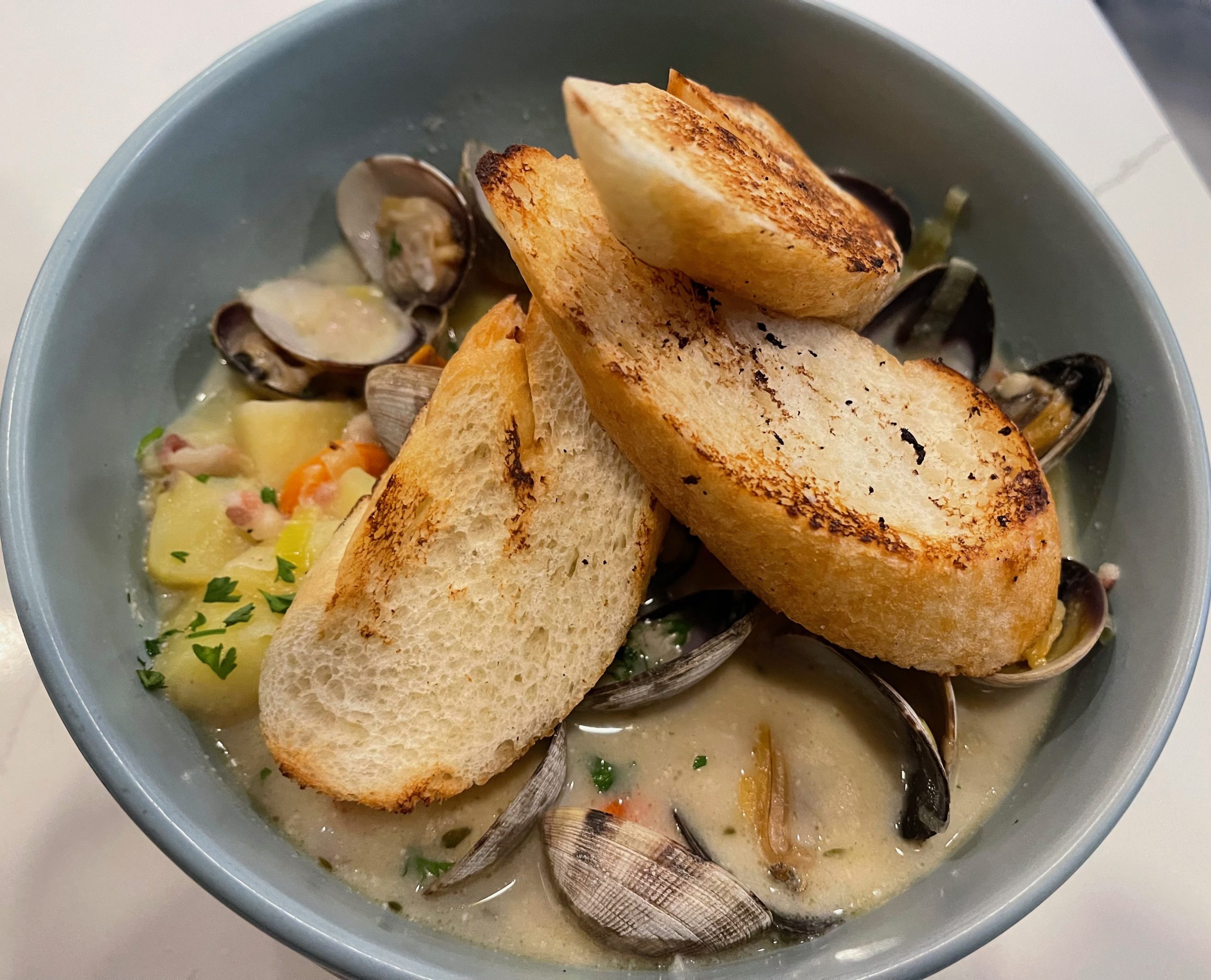 As if living just outside of Boston for two years just out of high school wasn’t thrilling (and filling) enough for this rustic clodhopper, New York City was only four hours (with good traffic) away.  There were more languages (800) spoken in New York City than there were people (500) in my hometown of Peñasco, not to mention a population of some 16-million.  All those languages meant a vast diversity of dining opportunities and I wanted to try them all.  Best of all, so many of them were available all day and all night long.  Large, hand-tossed slices of thin-crusted pizza were available from street vendors.  You could even find warm food at some of the Puerto Rican bodegas (owner-operated convenience stores) in the Bronx, home for my friends Carmen and Vladimir “Speedy” Gonzalez who graciously showed me around Metropolis.   At a neighborhood bodega, they introduced me to one of my favorite beverages, the legendary egg cream.

Untapped New York describes a New York City bodega as “where the city’s character, diversity, and history are embodied in a physical space.”  Sadly, however, instead of being treated with reverence for being “lifelines for New York City’s food deserts” bodegas seem to be a magnet for violence and crime.  In fact, even if you’ve never been to a bodega, it’s likely you’ve seen a bodega at some cop movie or television show based in New York City.  Based on those movies and television shows, you might believe half the robberies and shootings in New York City happen in bodegas.  Instead of depicting bodegas as havens for newcomers integrating into the community, the wide screen depicts robberies, hold-ups and murders instilling a sense of fear within the communities served by the bodegas.  Sadly, there’s a lot of truth to those stereotypes.

Most recently bodegas made the news for an altogether different reason than violence.  During a speech in San Antonio, Texas, First Lady of the United States Jill Biden said: “the diversity of this community, as distinct as the bodegas of the Bronx, as beautiful as the blossoms of Miami and as unique as the breakfast tacos here in San Antonio, is your strength.”   Though her remark was intended in a complimentary manner, she was excoriated by the National Association of Hispanic Journalists which tweeted that, “We are not tacos.”   She had to apologize “that her words conveyed anything but pure admiration and love for the Latino community.”

The purple admiration and love I had for New York City bodegas didn’t exactly come full circle with the October, 2022 launch of Albuquerque’s Central Bodega, but it did rekindle feelings I hadn’t experienced in decades.  My experiences in bodegas had a small community feel you might not expect in New York City.  Some bodegas reminded me of Sahd’s General Store in Peñasco where you can still find staples like chips, candy, coffee, sodas, newspapers and over-the-counter remedies, along with household items such as laundry detergent and trash bags. Some bodegas have a deli counter while Sahd’s offers sliced to order Longhorn cheese.

Central Bodega is most assuredly not a traditional New York City bodega at least insofar as selling comestibles.  What it is is encapsulated in its “mission statement:” Central Bodega is all about bringing our community together for enticing craft cocktails, delicious food coupled with authentic hospitality.”  Purporting to offer “a refreshing dining experience like no other,”  the Central Bodega hopes to “bring to life the old feel of the Historic Route 66 highway with a modern twist.”  Central Bodega is the brainchild of born-and-raised Burqueños Jessica and Sam Beecher whom you might remember from the Ambrosia Cafe & Wine Bar in Albuquerque Old Town.   Cafe Bodega is the embodiment of their love of food, wine and community.

Nestled in the heart of Nob Hill in a two story edifice with a basement, the Central Bodega is the Beechers’ answer to the multitude of breweries launched across the area over the past fifteen years.  Bonafide oenophiles, the Beechers also own Mission Winery in the North Valley.  Their wine is available on the menu among the sixty wines offered.  Also on the menu are Spanish, Italian and French dishes.  In an interview with the Albuquerque Journal, Jessica Beecher emphasized that for their Bodega “food is not just food. “It’s … a time to gather with loved ones and friends and reconnect over a meal and good drinks.”

Similar to some New York City bodegas, Albuquerque’s Central Bodega offers sandwiches (lunch menu only) to go along with just a few artisan products.  The menu showcases seasonally available local ingredients.  Somewhat like tapas in tapas bars throughout Spain, Central Bodega offers a number of small bites for both lunch and dinner–everything from mixed nuts and olives to salmon rillette and crudite.  Three elevated salads are also available.  The sandwich menu shines.  Though only five sandwiches are listed, each is intriguing and extraordinary, not a copycat of other similarly named sandwiches you’ve had in town.   The lunch menu offers two pasta dishes; the dinner menu five items you might find at a fine-dining establishment.  Mussels–Spanish, French and Italian–are available both for lunch and dinner, each bowl featuring ingredients and seasonings specific to their named heritage.  Make sure to order half a baguette with honey butter or olive oil.

While coccoli may sound like El Cucuy, the Mexican bogeyman purported to punish misbehaving children, it’s not even close.  Coccoli translates to “cuddles” in Italian and refers to Tuscany’s favorite little balls of fried dough.  At first glance the three coccoli resemble little sopaipillas and indeed, they’re puffy pillows of fried dough.  Taste them and you’ll quickly note how much saltier coccoli are than sopaipillas.  Otherwise, they’d probably go quite well with honey.  Coccoli are served with prosciutto so thin you can practically see right through it.  It’s prosciutto Di Parma, one of the gold standards of prosciutto.  Also served with the Coccoli is a burrata, perhaps best described in Castello cheese website: “Burrata is a perfect blend of contrasting textures working together to create a landscape of soothing delights. Its soft shell wrapped around a creamy center delivers a clash of sensations and a buttery consistency unlike any other.”

Cole, our savvy server raved about Central Bodega’s clam chowder, a special of the day.  One of several things which distinguishes this clam chowder from others you may have had in the Duke City area, is that this one requires a little work to reap a bivalve reward.  Yep, you’ve got to extricate each clam from its calcareous shell.  It’s a bit messy, but worth the effort.  The clam chowder is served with three lightly toasted crostini slices.   A light and delicate, but very satisfying broth replete with tender clams, diced potatoes and herbs was preceded by an aroma which promised a deliciousness later delivered. It’s a very good clam chowder.

Is there anything better than a fully-loaded Italian sandwich brimming with Italian meats, salty cheeses, fresh veggies, and flavorful dressings?  There doesn’t seem to be one standard template for such a sandwich, but if there’s one commonality among every Italian sub, hoagie, torpedo or sandwich, it’s that you’re going to like it.  Central Bodega’s The Italian is constructed from prosciutto, bresaola, sobrasada, fontina, mortadella, veggies, olives, pepperoncini and champagne vinaigrette on a baguette.  It’s perhaps the best Italian sandwich we’ve had in the Land of Enchantment.  More than making its presence felt is the bresaola which Cole told us “smells like Christmas” when it’s being sliced thinly.  Bresaola has a sweet, aromatic “clovey” flavor that accentuates the taste of the lean beef from which it’s made and the spices used to impart flavor notes. Also notable is the sobrasada with its prominent peppercorn notes.  If you love sandwiches with diverse and assertive flavors, this is a sandwich for you.

Cole, for ten years a tour guide in Alaska, can probably sell ice to an Eskimo.  He’s the consummate server with the ambassadorial and conversational skills only the best servers ever achieve.  He didn’t need to call upon his gift of gab to sell me on the dessert special, bread pudding imbued with bourbon, apples and caramel topped with Chantilly cream.  Though bread pudding may be considered an anachronism by some, it’s one of my very favorite desserts.  Central Bodega’s version is terrific!  Unlike some bread pudding, it’s not cloying and though I may eschew adult beverages, the prominent bourbon notes may make a believer out of me.

My Kim would just as soon order ice cream or gelato, but it didn’t take much convincing that she should order churros with two scoops of gelato served with a caramel sauce punctuated by red chile.  The churros, deep-fried pastries dusted with icing sugar paired magnificently with both the caramel sauce and the gelato, a vanilla bean beauty.  The caramel sauce had a gentle kick belying its rich color. If you’ve ever wondered how churros got their name, a widely-held theory is that they were invited by nomadic Spanish shepherds who named them for Churra (or Churros) sheep.

Central Bodega really is unlike any other dining experience you’ll have in Albuquerque.  It seems destined to be another jewel in Nob Hill’s Crown.