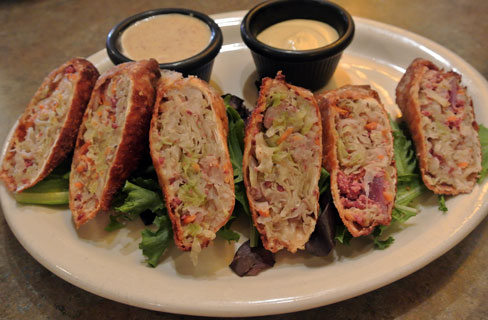 Despite several efforts by the United States Department of Agriculture (USDA) to make it more user-friendly, the Food Pyramid has never been that easy to understand. Could confusion be one of the reasons 63.1% of American adults are either overweight or obese? Based on that alarming percentage, you’d think the pyramidal nutritional guide has chocolate as its base topped with pizza, burgers and cheesecake tapering to a whipped cream covered point.

Perhaps to alleviate confusion, in June, 2011, the USDA replaced the ubiquitous food pyramid with a graphic depiction of a plate which (ostensibly) should make it easier for us to determine if we’re balancing our meals nutritionally. Hopefully the size of the plates at the typical family home aren’t platter-sized (or that the pie-wedge shaped components of the plate–fruits, grains, vegetables and proteins–won’t have a subliminal effect).

The Food Pyramid is not a uniquely American way of depicting nutrition. Throughout the world there are many ways used to present nutritional recommendations graphically (the Japanese use a spinning top model) even though the basics of nutrition have remained fairly static over time and across borders–with a few country specific differences based on local diet. In Japan, for example, a glass of tea forms the axis of the top.

Another commonality among most food pyramids is confusion. It seems no matter what governments throughout the world do to clarify nutritional recommendations, the more confusion arises–primarily because graphics alone don’t tell the whole story. The most simple and straight-forward food pyramid to be found on the internet is the jocular stereotype-based Irish Food Pyramid. At its base are potatoes topped by meat then whiskey, ales, stouts and lagers. “Everything else” occupies the top of the pyramid.

If stereotypes have at least some basis in truth, this stereotype is embraced by my Irish colleagues who retire to their favorite pub for a pint (or six) after every hard (or easy) work week. You’ll find them sporting the Irish food pyramid on tee-shirts and jumpers (sweaters) and doing their best to adhere to its nutritional recommendations–often to the point of over-achievement (especially on the ales, stouts and lagers).

There is also a historical basis for the stereotyped Irish food pyramid, particularly at its base which is occupied by the potato. Potatoes didn’t arrive in Ireland until the second half of the 16th century, but it quickly ascended to the main food crop of the poor–primarily because great yields could be cultivated in a small acreage. Sustenance for the gentry and nobility included beef, obtained from herds of cattle raised on the verdant Irish fields.

The Irish pub concept has caught on like wildfire throughout America. It, too, is a concept based on stereotypes which some Europeans have denounced as “the McDonald’s of the pub trade” courtesy of “their pseudo-Irish names, tacky green paint and super-cooled Guiness.” Not surprisingly, the Irish pub template also includes fun, the free flow of pint after pint and of course, Irish food.

The Seanathair (old Irish word for grandfather) of Irish pubs in Albuquerque is O’Niell’s Irish Pub which first launched in 1994 and was immediately embraced by the Nob Hill community. Alas, after nearly a decade on the north side of Central Avenue, O’Niell’s lost its lease and was forced to closed. Three years later–in 2006–O’Niell’s found a new home on Central just a few blocks and across the street from its original home. Its rebirth was welcomed with the enthusiasm of a St. Patrick’s Day parade.

A second instantiation of O’Niell’s opened in 2010 on Juan Tabo. It’s a sprawling complex almost as large as the Defined Fitness Gym nearby (and from the outside, it even resembles a gym). The Juan Tabo restaurant includes a large dog-friendly patio where a backdrop of shrubbery and young trees helps make it one of the more attractive patios in the Duke City. It’s easy to forget you’re only a few feet away from the bustling Juan Tabo traffic.

The interior is also quite attractive with a long mirrored bar as its cynosure. The intricate interlacing patterns of Celtic art can be seen throughout the restaurant, a sophisticated tribute to one of the great civilizations in world history. One wall is dedicated to supporting the community art program with a monthly artists rotation. Seating is more functional than it is esthetic.

The formula for O’Niell’s popularity is “good food, honest drink.” Honest drink is described on the restaurant’s Web site as “the perfect pint and the perfect pour, all delivered with perfect service.” Good food means “top quality versions of the lunches, dinners and appetizers that you know and love, fun alternatives, and some classic Celtic favorites.” Sounds good to me!

It wouldn’t be New Mexico if the starters section of the menu of a restaurant–any restaurant maybe with the exception of Asian eateries–didn’t have salsa and chips. O’Niell’s offers what the state legislature may someday consider New Mexico’s official state appetizer. Land of Enchantment inspired starters also include chile con queso, a black bean quesadilla, chile cheese fries and O’Nachos. If you’re wondering if this is a misplaced paragraph intended for a review of a New Mexican restaurant, read on.

6 June 2011: St. Patrick must have been part Chinese, too with a little Swiss thrown in for good measure. O’Niell’s also offers a very Irish twist on an Asian favorite in crispy corned beef and cabbage egg rolls. Julienne carrots, red and green cabbage and corn beef and Swiss cheese are stuffed into egg roll skins then deep-fried. They are sliced diagonally and served six pieces per order along with three sauces redolent with personality–a honey Dijon sauce, horseradish and hot mustard.

Along with the duck confit egg rolls at Zinc, these are some of the Duke City’s most unique and delicious egg rolls, a terrific and unexpected surprise that showcases the versatility and possibilities of egg rolls (if only the city’s Chinese restaurants figured this out). It’s a given that the thinly-sliced corned beef would go so well with the cabbage, but the egg roll wrappers and deep-frying bring out unexpected qualities. Each of the dipping sauces complement the egg rolls beautifully and none, not even the hot mustard, will water your eyes.

6 June 2011: O’Niell’s Web site calls lamb “the core of the quintessential Irish meal.” One of the ways in which lamb is commonly served is as a thick and hearty stew. If you’ve ever visited Ireland in the winter you’ll understand why. O’Niell’s lamb stew is very much reminiscent of the lamb stew you’ll find at many a Dublin pub. Succulent lamb as tender as carne adovada, is served with vegetables and potatoes (of course) and is seasoned with a hint of rosemary and thyme. It’s a thick stew with lamb chunks a plenty, a true comfort food stew. It’s also quite delicious.

6 June 2011: If lamb is the core of the quintessential Irish meal, the boxty is the true test of Irish womanhood. An old Irish rhyme declares, “Boxty on the griddle, boxty on the pan; if you can’t make boxty, you’ll never get a man.” Boxty is a traditional Irish potato pancake whose Irish name actually translates to “poor house bread.” At O’Niell’s, the boxy is made with scallions and is flattened like a pancake. It’s worthy accompaniment to a six-ounce, 100 percent USDA choice sirloin steak served with a Guinness demi-glace and vegetable du jour. The sirloin is prepared to your exacting specifications and is quite good, however, the petite cut is hardly man-sized.

9 August 2014: You’ve got to respect a restaurant with a section on the menu dedicated solely to Reubens. Never mind that there are only three of them on the menu, the fact that they’re singled out is big news. Morgain Davidson, a long-time friend of this blog, turned me on to the Boxty Reuben, a knife-and-fork Reuben sandwich which replaces the traditional rye with two boxty. The rest of the Reuben is pretty standard: grilled corned beef, sauerkraut, Russian dressing and Swiss cheese. Only the ingredients are standard. The flavors are superb! The corned beef is nicely seasoned and the sauerkraut offers a nice pickling punch, but it’s the boxty we most appreciated. The scallion-potato boxy make for a great rye substitute even if you can’t pick up this sandwich as you would a traditional Reuben.

6 June 2011: Another traditional Irish favorite done well at O’Niell’s is Bangers and Mash, two char-grilled Irish sausages served on mashed red potatoes and smothered in a rich demi-glace made with Guinness stout, mushrooms and caramelized onions. This is humble cuisine elevated to an art form thanks largely to the demi-glace. Its gravy-like consistency and the marriage of fleshy mushrooms and caramelized onions covers the potatoes and sausage like an Indian blanket.

9 August 2014: It’s often said that on St. Patrick’s Day, everyone’s Irish. At O’Niell’s, even the Cuban is Irish. The Cuban sandwich, that is. Described on the menu as “Cuban-inspired, but decidedly Irish,” it’s a “flavor-packed mix of corned beef, pulled pork, coleslaw, spicy Southwest aioli, hot mustard and Swiss all topped with grilled pickles.” As with all multi-ingredient sandwiches, the sum is greater than all its parts, but some of those parts stand out very well. The grilled pickles are assertive, the way pickles should be. The corned beef fit in as if it belonged on the Cuban sandwich. This sandwich pairs well with waffle fries.

16 June 2011: The dessert menu includes O’Niell’s take on a United Kingdom favorite known as spotted dick. Called “Irish Delight” on the menu, it’s a different bread pudding every season. Alas, it’s one of the more cloying bread pudding offerings we’ve had in the Duke City, a tooth-decaying sweet treat. Perhaps some cold vanilla ice cream would have cut the sweetness a bit.

Founder Rob O’Niell lives by the edict “No Sniveling,” an approach to life to which more of us should subscribe. There’s not much to snivel about at O’Niell’s Irish Pub, a fun place to dine even if you’re not Irish.