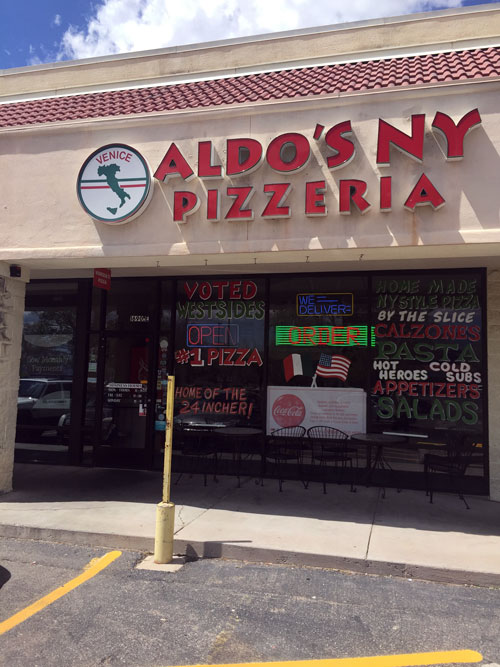 Being within walking distance of my place of employment makes this old fashioned pizzeria an easy choice while excellent pizza and a surprisingly varied menu for such a small storefront makes it the right choice! It’s the right choice for Rio Rancho residents, many of whom have their familial roots in New York City just like Venezia’s Pizzeria has. Moreover, Venezia’s has deeper roots in the mother country where pizza was invented.

The pizzeria is, in fact, named not for a family named Venezia, but for Venice (Venezia in Italian), Italy, the fabled city on the water which the New York Times has described as “undoubtedly the most beautiful city built by man.” A mural on the wall depicts the romantic city of canals and gondolas. The mural shares space on the walls with certificates of appreciation for the restaurant’s community involvement and sponsorship of youth activities.

On the pizzeria’s northeast corner stands a large plastic statue of the Statue of Liberty complete with stola, crown and sandals. New York City transplants in Rio Rancho appear preternaturally drawn to Lady Liberty’s beckoning, “Give me your huddled masses yearning to…eat pizza.” Some of them will tell you Venezia’s is the next best thing to being in Metropolis.

Family patriarch Adolfo Venturino and his wife Maria migrated to America from Italy in 1964 and lived in New York until 1977 when they were enticed to the desert hamlet by the slick brochures and dubious salesmanship of the American Realty and Petroleum Company (AMREP for short). AMREP’s laid it on as thick as a syrupy marinara sauce to attract hundreds of New Yorkers (among others) to the then untamed western fringes overlooking the Rio Grande.

In 1978, Maria began working in the kitchen of Adolfo’s brother Frank, at Venezia’s Pizzeria which quickly became a little piece of home for the many New York transplants. For seventeen years, Venezia’s thrived in the City of Vision, but in 1995, Frank moved to Arizona to be near his children. Venezia’s remained shuttered until the millennial year when Aldo and Renato Venturino, the sons of Adolfo and Maria, reopened the restaurant with the support and blessing of their uncle.

Though Frank launched Venezia’s Pizzeria stores in Chandler and East Mesa, Arizona, the Rio Rancho version of the pizzeria he founded is ensured continuity with the stabilizing presence of Maria in the kitchen. Maria is still at it a decade later, preparing her now famous marinara sauce–a sauce which is perfectly seasoned, not too tangy or overwhelming, a sauce which complements pasta perfectly.

Unlike other claimants to “New York style pizza,” Venezia’s has the pedigree and product to pull it off. The crust is foldable and chewy (ala New York style) while the ingredients are unfailingly fresh. Battleship sized slices are triangle-shaped wedges that puff up like a bantam rooster at the edges and taper to a thin bottom. The outer crest is crisp, the rest chewy with a nice char at its underside. Venezia does a robust take-out business, but the lunchtime crowd generally comes in for slices right out of the oven with their favorite toppings. These slices will burn the roof of your mouth if you don’t let them cool down a bit, but they’re so good, few diners wait.

It’s almost an established law of nature that if a restaurant serves great pizza, it serves mediocre sandwiches and vice-versa. There are some sandwiches which defy that unwritten, unproven law. One is Venezia’s meatball sub, a nine-inch behemoth served out of the oven on bread that’s soft on the inside and crispy-crunchy on the outside.

Unlike some meatball sandwiches, this one doesn’t swim in sauce. In fact, the sauce is conservatively applied; it doesn’t run down your arm or smear your face. The meatballs are huge and they’re also meaty, not filler-based. A blanket of melted mozzarella cheese helps keep the meatballs in place. It’s a much better meatball sub, by far, than you’ll find at any of the chains.

It’s also unusual for a pizzeria ensconced in a relatively small storefront anywhere to provide such a varied menu, one that extends far beyond pizza and sandwiches. The pasta menu would give much larger Italian restaurants a run for their money with an ensemble that includes baked ziti, cheese ravioli, meat lasagna, spaghetti with sausage (meat sauce or marinara), and fetuccini Alfredo. The pasta menu is mostly of the “red sauce” variety that most associate with Italian comfort cooking.

Mama Maria makes her pasta dishes, homemade meatballs and marinara sauce from scratch in the tradition of wholesome old world traditions she learned in her Italian hometown. The personal touch shows in sauces that are simmered to bring out the enticing aromas and delicious flavors with which Italian food is associated. The ricotta stuffed cheese ravioli in that homemade marinara sauce is delicious with a dozen or so tablet-sized raviolis nestled in sauce. The raviolis are not al dente nor are they too mushy, just perfectly-sized pillows of rich, savory ricotta.

Lasagna is another Venezia’s favorite, a brick-sized slab of pasta layered with ricotta then covered with melted mozzarella and covered in meat sauce. The plastic utensils cut into the lasagna like a knife cutting into butter save for the melted cheese which stretches beyond your plate like pulled taffy. The ricotta is applied rather parsimoniously, my only complaint about lasagna, a dish for which Garfield the cat and I both share an affinity.

Baked ziti has a reputation as being somewhat of a “cheesy gut bomb” prone to dryness. Sure, it’s an indulgence, a rich, heavy and filling diet-devastator, but made right, it can be terrific. Venezia’s version is a good one, a rich tomato sauce, oodles of noodles and rich cheese coalescing into a flavorful, not overly heavy entree. I’ve had baked ziti almost nauseatingly rich. This one is rich, but not overly so. It’s got a nice balance of ingredients in proper proportion to enhance flavors.

Venezia’s Pizzeria is a Little New York institution which has expanded into Albuquerque. In 2004 Venezia’s expanded its operations to include two Northeast Heights restaurants, both of which are highly esteemed.