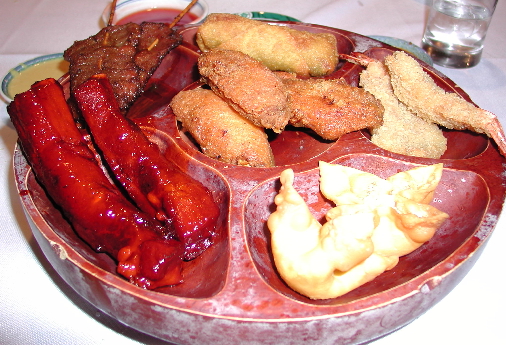 When does confidence become audacity? Is there a point at which a claim becomes braggadocio? To what extent can you trust a review on a hometown magazine? These were all questions we sought to answer during our inaugural meal at a Rio Rancho Chinese restaurant with the quaint name “Best Lee’s.”

Best Lee’s is ensconced in the Southern Plaza Shopping Center in the same suite that held Peking House, a Chinese restaurant so mediocre I chose not to write anything about it during our one and only visit.

In truth, we thought Peking House was still happily torturing taste buds until reading the December-January edition of Rio Rancho magazine. A published review practically glowed with praise over a dining experience at Best Lee’s.

Best Lee’s opened for business on February 1st, 2006. It specializes in New York Chinatown and Hong Kong style Chinese food. Its take-out traffic is nearly as robust as its dining-in business according to our waiter who’s been with the restaurant since day one. He confirmed that the owner’s last name is Lee and that the “Best” part is solely a claim to greatness.

The restaurant is somewhat austere in its decor with just a few silk and sandalwood fans and stereotypical examples of three-dimensional Chinese art hanging on the wall. Chinese lanterns hang from the ceiling, but there really isn’t anything “eye-catching” to hold your interest (unless it’s maybe the Christmas tree which hadn’t been taken down as of our January 19th visit).

Complementary wonton chips are brought to your table while you peruse the menu. The chips are somewhat oily and don’t fare that well with the contrasting taste of Lee’s sweet-and-sour sauce which accompanies them.

Considering my ill-fated luck when ordering traditional Chinese entrees at most Albuquerque area Chinese restaurants, we actually opted to try more Americanized favorites. Though we didn’t stoop so low as to order anything sweet-and-sour, we did lower our standards by trying Best Lee’s pu pu platter.

The pu pu platter, as found in American Chinese cuisine is a circular, compartmentalized bowl consisting of an assortment of appetizers, typically including egg rolls, spare ribs, chicken wings, skewered beef, fried shrimp and fried wontons. Sometimes pu pu platters arrive at your table atop a can of Sterno so they can stay hot.

Best Lee’s pu pu platter wasn’t anywhere close to the best pu pu platter we’ve had, but it wasn’t the worse either. It is comprised of the appetizers listed above although the fried wontons are actually stuffed with Crab Rangoon. The chicken wings are probably the best of the appetizers. A crispy coating envelops rather moist and flavorful chicken. The egg rolls are a step above what you get at most Chinese restaurants (you can actually find shards of fried pork in these). You can enjoy your pu pu platter with four sauces: hot mustard (somewhat anemic), duck sauce (the ubiquitous red stuff), sweet-and-sour sauce and a soy-based, salty dumpling sauce.

Rio Rancho magazine boasted that Best Lee’s fried rice “sets the standard” and is “nicely seasoned and perfectly moist” as well as “the best we’ve ever tasted.” In truth, the fried rice is pretty good, albeit not a standard setter by any means.

About General Tso’s chicken, Rio Rancho magazine said it was “outstanding and delicious.” Ironically, while General Tso is a military warrior of significant historical repute in China, the chicken dish named for him is unknown in China.

This Americanized sweet-and-spicy, deep-fried dish is, however, a good example of Americanized Hunan and Szechuan-style cooking. As at most Chinese restaurants in America, General Tso’s chicken is listed as a “chef specialty” at Best Lee’s allowing the restaurant to command a higher price for this entree.

Best Lee’s version of General Tso’s chicken is described on the menu as “cruncby (SIC) chunks of juicy chicken battered and sautéed in a hot and spicy sauce.” The entree consists of tidbits of battered chicken, lightly steamed broccoli and what looks and tastes suspiciously like a Vietnamese chili sauce. If there are any scallions and hot chili peppers (as called for on a standard recipe) floating around in the sauce, you’ll be hard-pressed to find them.

Best Lee’s certainly does not serve the “best food in town.” In fact, it may not even serve the best Chinese food in town (Heaven Dragon might own that distinction). It is what it is–a popular local eatery offering relatively inexpensive Chinese food that may not appeal to the most discriminating and savvy aficionados of authenticity, but will be liked by the masses who appreciate the Americanization of its entrees.