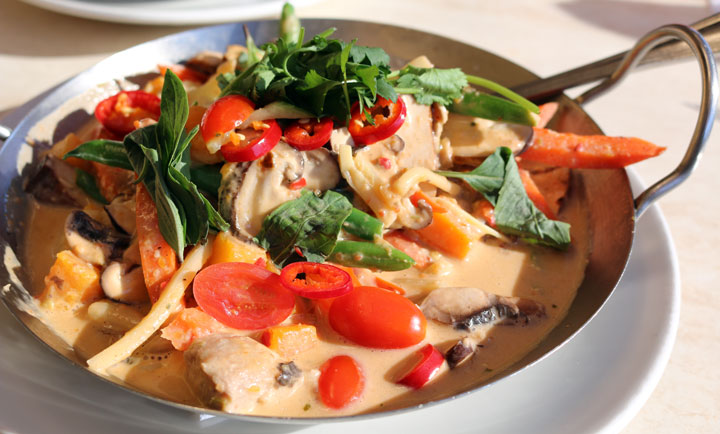 “Nothing is original. Steal from anywhere that resonates with inspiration or fuels your imagination.
Select only things to steal from that speak directly to your soul.
If you do this, your work (and theft) will be authentic. Authenticity is invaluable; originality is non-existent.
And don’t bother concealing your thievery – celebrate it if you feel like it.
In any case, always remember what Jean-Luc Godard said:
“It’s not where you take things from – it’s where you take them to.”
~ Jim Jarmusch
American Film Director

I discovered that pithy pearl shortly after a recent email exchange with Gil’s thrilling pollmeister (my spellchecker still insists on “poltergeist”) Bob of the Village of Los Ranchos. We were deliberating whether to ask if you believe New Mexico’s talented chefs “invent” new dishes or if the cuisine found across the Land of Enchantment is primarily dishes that have been copied from recipes by chefs in other cities. Rather than declaring “nothing is original” as the only possible answer to the proposed poll question, Jim Jarmusch’s sapient quote prompted even more questions such as: Is adding red or green chile to a non-New Mexican recipe inventing something original? Isn’t any variation to an existing recipe actually making it an original recipe? Does it matter?

“Does it matter?” It’s a question my Kim asks when I whine and complain at her suggestion that we give P.F. Chang’s China Bistro another shot. My retort is typically something along the line of “but it’s so Americanized” or “it’s not real Chinese food” and of course “but it’s a chain” and most often “but the P.F. in P.F. Chang’s stands for “Paul Fleming,” the American restaurant impresario who co-founded the Asian-themed casual dining restaurant chain in 1993. She reminds me (and rightfully so) that we both used to like P.F. Chang’s back in the mid-1990s before I became so narrow-minded (she doesn’t buy my claims of being enlightened) about food. Further, she argues “if it’s not “real” Chinese food, it must be original.” Aaargh! She got me again!

In a thinly-veiled attempt at saving face, I agreed to take her to P.F. Chang’s but only to prove how inauthentic and unoriginal it is (as if I’m really an expert on the 2,000-year-old tradition of wok cooking in China). In truth, P.F. Chang’s roots are deeply and authentically Chinese with an impeccable and unimpeachable culinary pedigree that includes Cecilia Chiang. Often called “the Julia Child of Chinese cooking,” Cecilia essentially introduced authentic upscale wok-centric Northern Chinese cuisine to America at her legendary San Francisco restaurant The Mandarin. Her son and culinary disciple Phillip is one of P.F. Chang’s founding partners (the “Chang” in P.F. Chang’s).

P.F. Chang’s “farm to wok” approach is a novel idea. Every one of the more than 200 P.F. Chang’s restaurants across the fruited plain has a scratch kitchen where chefs prepare fresh food daily. They chop vegetables, hand-roll sushi, hand-fold dim sum, juice fresh ginger root for the housemade ginger beer and create sauces from scratch. (You might be surprised at just how many Chinese restaurants uses out-of-a-bag sauces purchased from food distributors.) The wok cooking favored by the restaurant generates an intense flame which accounts for the smoky, caramelized flavors and crispy textures enjoyed in Northern China. Chefs use all-natural meat, responsibly sourced seafood, and local produce whenever possible–and here’s one you may not have known: The New York Times credits P.F. Chang’s with being the first national restaurant to use Sriracha. Today, its restaurants use nearly 100,000 bottles of Sriracha per year.

As if welcoming us back home after a twenty year hiatus, a special seasonal menu featured two of my very favorite food items any time of year: curry and butternut squash. For me, there was no reason to peruse the main menu any further. Hand-folded butternut squash dumplings (a savory squash filling and umami butter sauce topped with Thai basil and Fresno peppers) made good use of the butternut squash which is meant to be savory, not made to taste like pumpkin pie filling. The rich umami butter sauce was “lick the plate” worthy while the aromatic, fresh basil and the sprightly piquancy of the Fresno peppers imparted contrasting, yet complementary flavors.

For my Kim who’s been on a sushi quest of late, P.F. Chang’s six item sushi menu made it easy to decide which sushi roll we would have. When presented with compendium-like sushi menus, we typically can’t decide which select few to have and end up ordering too much. A good choice was the Kung Pao dragon roll (California roll topped with seared Ahi, Sriracha, tempura crunch and peanuts). Peanuts aren’t something you see that often on sushi, but along with the tempura crunch, they provide a nice textural contrast to the vinegared rice and pleasantly pink Ahi. Go sparingly on the soy-wasabi mix. There’s plenty enough flavor on the sushi roll.

Aptly named, the Harvest Curry (red curry, butternut squash, five-rice tofu, rustic vegetables and Asian mushrooms topped with Fresno peppers) would give the red curry at many a Thai restaurant a run for its money. Red curry teases your taste buds with more savory flavors than green curry or massaman curry, but the coconut milk gives it a nice balance. It’s the curry for those of us who don’t want a savory entree to taste like dessert. The so-called rustic vegetables include such upscale paragons of freshness as cherry tomatoes and red peppers. Then there’s the butternut squash, a sweet-savory blend which seems to bring out the invigorating qualities of aromatic basil and earthy mushrooms.

For my carnivorous queen, the wok-fried filet Mignon (sliced eight-ounce filet, black pepper butter sauce, rustic potatoes, onion and lime-garlic vinaigrette) beckoned. Born and bred in the City of Big Shoulders (and big pork chops, steaks and ribs), she’s a meat and potatoes aficionado. Maybe if all steaks were wok-fried at intense heat, her husband might become a convert to the joys of the carnivorous persuasion. The light caramelization on each meaty morsel and the tender, rich smokiness made this skeptic a believer. Kim didn’t like the rustic potatoes, but they didn’t go to waste. They fit well with the rustic vegetables in the Harvest Curry.

To say Chinese desserts haven’t occupied much of a place in the world culinary stage is a vast understatement. Save for the few dessert items you’ll find at Ming Dynasty‘s amazing dim sum menu, we’re hard-pressed to name any. So, you could hardly blame P.F. Chang’s for offering “Asian inspired” American desserts then christening them with Asian themed names. The largest is the aptly named Great Wall of Chocolate. It’s been rumored that astronauts can see this humongous dessert from the space station. Picture a multi-layered slab of chocolate upon chocolate armored with chocolate chips. Six layers of chocolate ganache divide this chocoholic’s dream. Too much of a good thing? Maybe not, but it’s got a week’s worth of sinfully indulgent calories.

So there you have it! 2017 probably won’t be remembered as the year in which you read reviews of two national chain restaurants on Gil’s Thrilling…, but if you want a memorable Chinese dining experience, this over-the-top franchise will give you one.