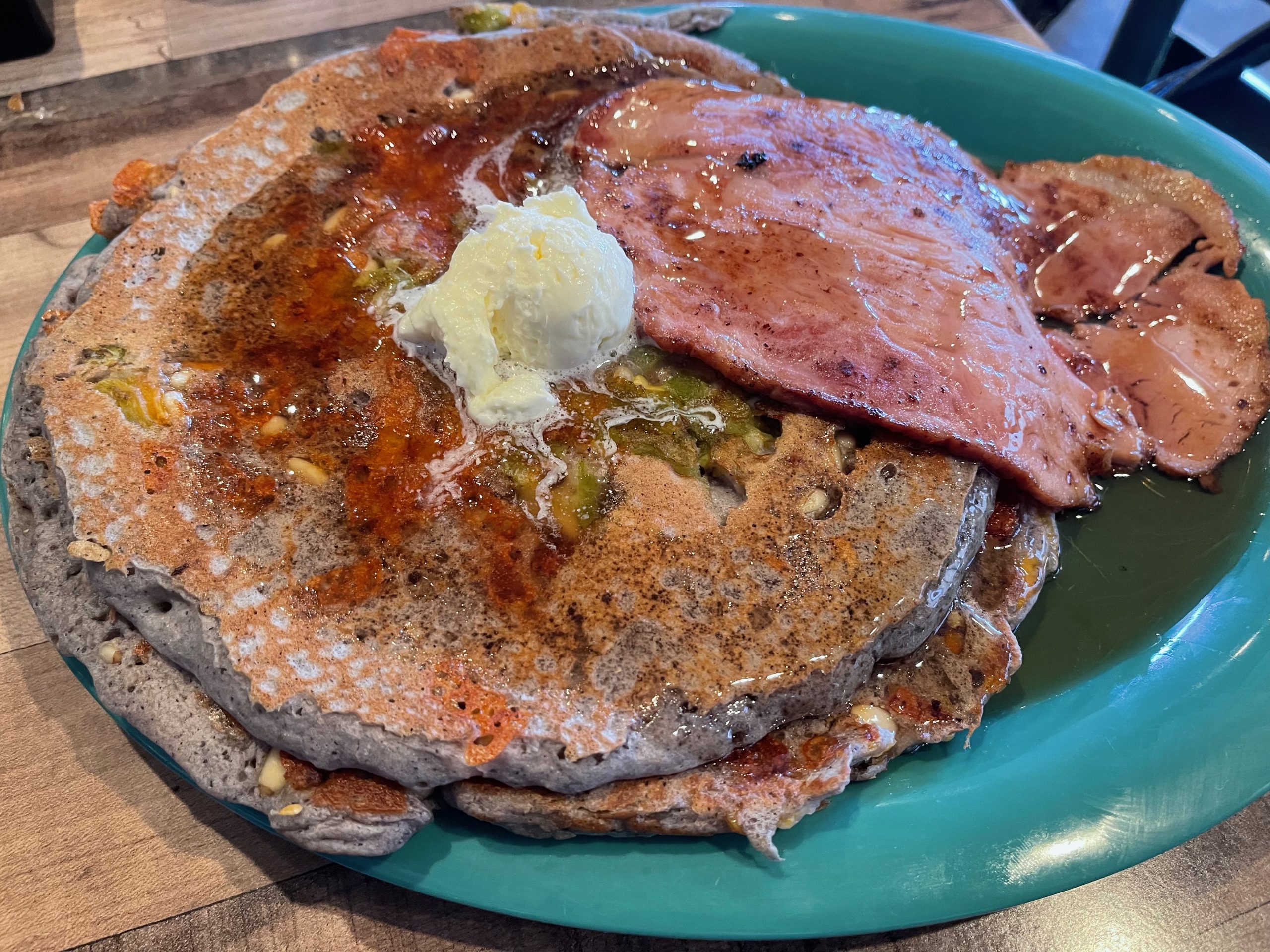 HELLO DELI
(to the tune of Hello Dolly)
“Hello Deli,
this is Joe, Deli
would you please send up
a nice corned beef on rye.
A box of RITZ, Deli
and some Schlitz, Deli
Some chopped liver
and a sliver of your, apple pie.
Turkey Legs, Deli
hard boiled eggs, Deli
and a plate of those potatoes you french fry, oh
Don’t be late, Deli
I just can’t wait Deli,
Deli without breakfast, I’d just die.”
~ Frank Jacobs (Writer for MAD Magazine)

Transplanted New Yorkers of my acquaint remind me there are no true delis in New Mexico–despite restaurants such as Hello Deli “usurping” the name Deli.  By strict definition, they’re absolutely correct. A delicatessen, or “deli” for short, is a store where people can go to buy ready-to-eat items such as cold cut meats, sliced cheeses, sandwiches, breads, salads and so much more.  By New York City standards, a true deli is a reflection of the Jewish experience centered largely on pastrami and corned beef deftly sliced in front of you by a skilled counterman.

So, if Hello Deli is not a deli, what exactly is it?  Let’s explore the lexicon.  Could Hello Deli be a diner?  Serious Eats lists the characteristics that make up a diner:  breakfast all day, warm and sassy welcome for all greeters, modest pricing, counter and table/booth seating, quick service and anonymity of the short-order staff.  Is Hello Deli a restaurant or cafe? Generally speaking, a restaurant refers to any establishment that serves food and beverages. Meanwhile, cafes are places that serve different types of coffee and drinks. Following that logic, all cafes are restaurants – but not all restaurants are cafes.

By that definition, Hello Deli can’t be a cafe which purists would also define as a restaurant that does not offer table service and customers order their food from a counter then serve themselves.  If my little exercise in lexicology only served to confuse matters, it’s more important that by any name or definition, Hello Deli has been satisfying Duke City diners (a customer at an eatery) for more than three decades.  For seven days a week, it’s a home away from home to the industrious folks who call the Journal Center area their place of employment.  For the rest of us, Hello Deli is a destination when we’re craving hearty portions, breakfast all day, low prices, delicious food and great service.

On some weekdays for lunch, lines snake beyond the entrance to the counter where you place your order.  Fortunately the well-practiced staff keeps things moving, pleasing throngs of hungry diners with grace and smiles.  You’ll certainly run into owner Marcus Cassimus, a grizzled gentleman conspicuous for two reasons.  First is his height.  Marcus played basketball with the Greek National Basketball Team years ago.  Second is his peripatetic presence.  He may be the boss and owner, but he’ll escort guests to their tables, deliver orders, flit between tables to ensure his guests are happy…basically anything needed to be done.

Hello Deli may not offer a true New York deli experience, but it does offer generous portions of delicious food New Mexicans crave.   A formidable menu ensures there’s something for everyone.  There’s a reason Hello Deli’s motto is “Say hello to more choices.”  Here’s how the restaurant’s (cop-out?) website describes breakfast:  “Hello Deli has all your favorites or try our famous chicken fried steak burrito or savory-sweet Santa Fe blue corn pancakes, all cooked on the double.”  Lunch reads just as invitingly: “Hello Deli fights the lunchtime blahs with savory sandwiches, fresh salads, glorious wraps and hearty burgers along with flavorful sides like our Jalapeno Mac and Cheese.”

5 April 2022: When my Kim toiled for the Associated Press (walking distance to the Hello Deli), she regaled me with tales of almost daily visits to the area favorite.  That’s probably why she never suggested it during one of our excursions.  When she finally brought me to Hello Deli, she virtually insisted (not that she got any argument from me) we order the green chile chicken soup.  As a ten-time judge at the Roadrunner Food Bank’s annual Souperbowl, I’ve had (literally) gallons of that enchanting elixir and have never tired of it.  Hello Deli’s version is top-shelf, among the best in Albuquerque.  It’s got the comforting qualities common to all great soups and it’s a composition of ingredients that work very well together.  The green chile has a nice intensity.  There’s plenty of shredded cheese swimming among the creamy composition and the chicken is seasoned well and delicious.

5 April 2022: In the May, 2022 edition of New Mexico Magazine, the Land of Enchantment’s sacrosanct green chile cheeseburger was celebrated.  The cover story depicted an exemplar of one of our state’s most beloved foods.  Order Hello Deli’s green chile cheeseburger and you’ll quickly find out why we love them so much.  A thick beef patty topped with pleasantly piquant green chile then sheathed in a molten blanket of cheese is just the starter.  Add lettuce, tomato and a smear of mustard and you’re in for a terrific treat between sesame seed buns.  The burger is served with thinly-cut French fries and a pickle spear.

5 April 2022: With an owner named Marcus Cassimus, is it any surprise the menu includes a spate of Greek items: Hello Gyro, Olympic Omelet, Greek salad and the Hello Corfu salad.  My Kim loves the Hello Gyro  served with plenty of garlicky, tender gyro meat sliced thickly and nestled  on a warm pita which also envelops onion, tomato and lots of creamy tzatziki sauce.  This terrific gyro is served with a pickle spear and a two-pack of saltine crackers.  The former makes sense.  We weren’t sure about the crackers.  In far too many Greek restaurants, we tend to order “double meat” not just because we love the lamb-beef amalgam, but some restaurants are rather parsimonious with their gyros.  Not so at Hello Deli.

5 April 2022: Only two desserts adorn the menu, a house-baked cookie and a house-baked sweet roll.  Technically, you can also have something sweet from the waffles/pancakes menu.  The sweet roll is a thing of beauty with gobs of glazed frosting and nearly enough cinnamon for my Kim.  They’re freshly baked to order which means you might have to wait a few minutes for one.  It’s worth it!   If you want to trade your buns of steel for buns of cinnamon (stolen from Ellen Degeneres), this is a good start.

23 April 2022: Former (and last) Gourmet Magazine editor-in-chief Ruth Reichl once wrote “I am here to say that there is nothing “everyday” about pancakes. Their entire purpose in life is to prove that a few simple ingredients can become absolutely extraordinary. They exist to wake you up, make you happy and send you out into the world with hope in your heart. That’s a tall order for a little cake, and it cannot be achieved by stinting. The minute you start worrying that they’re too rich you’ve defeated the whole purpose of pancakes.”  Many of us–including Shaggy and Scooby Doo–would agree.  Pancakes are an extraordinary every meal delight.

It’s not often we’re surprised by pancakes, but Hello Deli managed to blow us away with an offering called Santa Fe Cakes.  They’re virtually everything you would want a pancake to be and much more.  So much more!  Picture two near plate-sized blue corn pancakes with Cheddar and Jack cheese, green chile and piñon baked right in served with your choice of bacon, ham, sausage or chorizo and two eggs (any style) for a pittance more.  What makes these pancakes so downright delicious is the melding of ingredients you might not think would go well on pancakes slathered with syrup.  The green chile provides searing heat, the Cheddar and Jack provide sharp, salty contrasts and the piñon lends its woodsy qualities.  These pancakes are extraordinary!

23 April 2022:  Talk about an identity crisis.   The Cuban sandwich is not from Cuba.  Nor is it from Miami.  It actually originated in Tampa, Florida.  So says a Tampa Cultural History video series that’s both educational and informative.  The official recipe as described on a Tampa city resolution signed in 2012 calls for “crispy white Cuban bread, scored by slipping narrow strips of palmetto fronds into the dough before it’s baked. Then comes ham, sliced thin and lightly sweetened, followed by roast pork in a citrusy mojo sauce and a layer of salty Genoa salami. It’s finished off with Swiss cheese; three dill pickle slices (no more, no fewer); and yellow mustard, before the whole thing is pressed until the bread is warm and the ingredients meld.”

It goes without saying that a number of liberties have been taken with Tampa’s sacrosanct sandwich.  The further away you are from Tampa, the more brazen those liberties tend to be.  At least Hello Deli doesn’t claim to serve an authentic Tampa-style Cubano.  In fact, Hello Deli’s sandwich is called Hello Cubana and it’s pretty darned good (thank you, Andrew, for recommending it).  This sandwich is made with thinly sliced pork and ham topped with lettuce and pickles on a French roll with mayo, mustard and chipotle sauce.  Thinly sliced doesn’t mean it’s not piled on.  A generous amount of both pork and ham lay under a molten blanket of mozzarella with a thin sheen of chipotle sauce peeking through.  That chipotle sauce is so good you’ll want more of it.  The French bread is sweet and chewy, a nice canvas for a very good sandwich.

23 April 2022: My friend Bruce “Sr Plata” Silver’s antenna was raised when he perused Hello Deli’s menu and espied chicken fried steak burrito (scrambled eggs, chicken fried steak, hash browns, cheese and diced green chile in a flour tortilla, smothered with gravy).  We planned to visit the restaurant and determine if this creation is genius or madness.  My Kim beat us two it though someone’s going to have to tell her it’s not a chicken fried steak without gravy.  Worse, she asked that it be served without green chile and hash browns.  Aargh!  For what it was worth, the idea is probably genius, but my Kim rendered it incomplete genius…maybe grade school honor student genius.

Albuquerque’s Hello Deli may not be a true deli in the New York sense, but it’s one heckuva popular diner slash restaurant with a loyal following that now includes a certain gastronome who was late to the game.